From Metapedia
(Redirected from Greater Caucasus)
Jump to: navigation, search 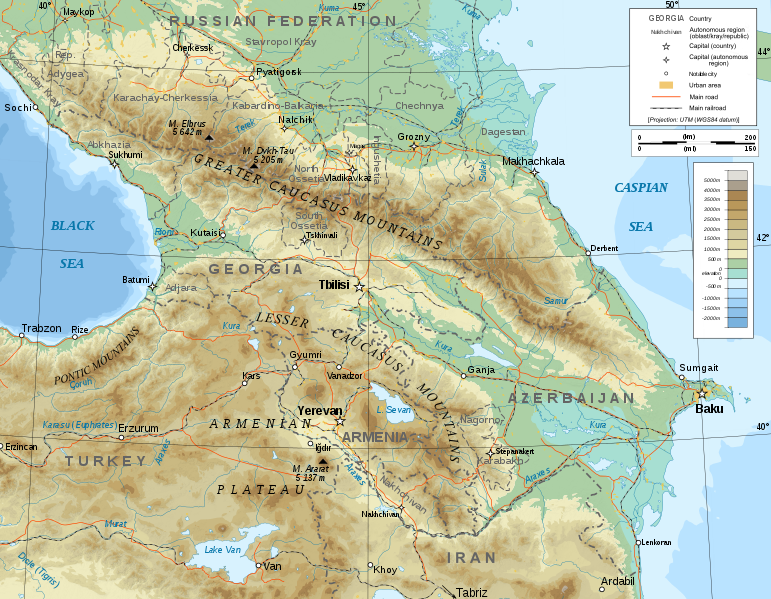 Topographic map of the Caucasus. The traditional border between Asia and Europe is at the watershed of the Greater Caucasus mountain range.

The Caucasus or Caucasia is a region in Eurasia bordered on the north by Russia, on the southwest by Turkey, on the west by the Black Sea, on the east by the Caspian Sea, and on the south by Iran. The Caucasus includes the Caucasus Mountains and surrounding lowlands.

The Caucasus Mountains are commonly reckoned as a dividing line between Asia and Europe, and territories in Caucasia are variably considered to be in one or both continents. The northern portion of the Caucasus is known as the Ciscaucasus and the southern portion as the Transcaucasus. The highest peak in the Caucasus is Mount Elbrus (5,642 m) which, in the western Ciscaucasus in Russia, is generally considered the highest point in Europe.

The Caucasus is one of the most linguistically and culturally diverse regions on Earth. The nation-states that compose the Caucasus today are the post-Soviet states Georgia, Armenia, and Azerbaijan; and various parts of Russia. The Russian divisions include Krasnodar Krai, Stavropol Krai, and the autonomous republics of Adygea, Kalmykia, Karachay-Cherkessia, Kabardino-Balkaria, North Ossetia, Ingushetia, Chechnya, and Dagestan. Three territories in the region claim independence but are not generally acknowledged as nation-states by the international community: Abkhazia, Nagorno-Karabakh and South Ossetia.

The Caucasus is an area of great ecological significance. The Caucasus harbors about 6400 species of higher plants, 1600 of which are endemic to the region[1]. Among its native animals are leopards, brown bears, wolves, European bison, marals and golden eagles. Among the invertebrates approximately 1000 spider species are recorded from the Caucasus[2]. The natural landscape of the Caucasus is one of mixed forest, with substantial areas of rocky ground above the treeline.

Part of this article consists of modified text from Wikipedia, and the article is therefore licensed under GFDL.