In ancient times, the recent Croatia's area was inhabited mostly by some romanized Illyrian tribes (Histri, Liburni, Delmatae, Iapodes, Celts, etc.[5]) under the rule of the Roman Empire[6], and after the end of it, these Illyrians mixed with the immigrant Slavs, Goths and others, forming the subsequent Croatian population. Recent detailed genetical analyses confirmed that only ca. 27% of actual Croats chiefly in N.W. Croatia include those of Slavic origin who immigrated from eastern Europe; others 70% are there of non-Slavic descent, including 46% of the southern Croats/Dalmatians of ancient Illyrian, Italian or Venetian origin who have been culturally Slavicized over the centuries. However, as late as the 19th and 20th centuries an average of 5 per cent of the Dalmatian population (more in places such as Fiume and Trieste) still spoke Italian as their native language.[7]

Slavs settled in the western Balkans from the early 7th century and then formed two small Duchies: Dalmatia and Pannonia. The establishment of the Trpimirović dynasty (newer Serbo-Croat term; medieval Terpimiri) circa 850, brought stability to the small Dalmatian Duchy (with its capital at Nin), under the Byzantines and Venetians, which together with the inlalnd Slav Pannonian Duchy (with its capital at Sisak), under the Franks, became a united Kingdom of Croatia in 925 under King Tomislav.[8] Most of Dalmatia continued under the overlordship of Venice until 1797.[9]

Following the death of last King, Petar II (Svačić), in 1102, Croatia entered into a personal union with Hungary. After the 1526 Battle of Mohács with the Turks, the "reliquiae reliquiarum" (remnant of the remnants) of Croatia became a full constituent part of the Habsburg Monarchy, from 1527-1918; in 1463 the eastern parts of medieval Croatia were captured by the Turks, and, with Bosnia, were included in Ottoman Empire until they were ousted in 1875-8 when administration was ceded to Austria-Hungary in the Treaty of Berlin.

Present-day Croatia was part of the Austro-Hungarian Empire until the end of World War I, when the Kingdom of Italy, annexed, by secret agreements with the plutocratic Western Allies, some parts where the Italian population was considered by them to be a majority; the dispute over Fiume is famous.

Croatia was forced to become part of the artificial new state of the Kingdom of Serbs, Croats and Slovenes (a 'Greater Serbia'), from 1919, which was declared the Kingdom of Yugoslavia in 1928; from 1929-1941 this included their autonomous so-called Duchy of Croatia (Banovina). The capital was, of course, at Belgrade, and the new state was ruled with an iron fist; it flatly repudiated the rights of minorities within its borders, despite it being in direct conflict with Minority Treaty of Paris (1919).[10] Doubtless this led to the assassination (long planned for by Croatian patriots) by a Bulgarian-Macedonian of Serbian King Alexander of Yugoslavia in Marseilles in October 1934. 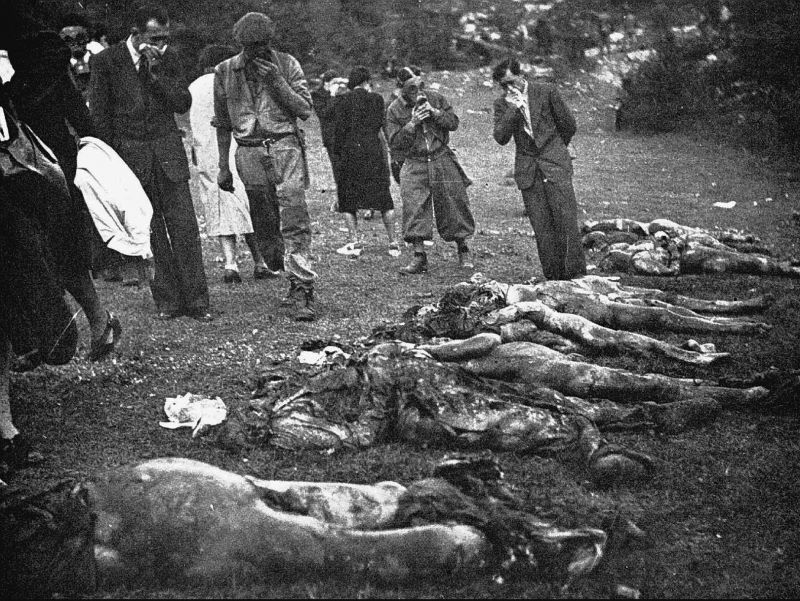 Croatia gained independence in 1941 when the axis powers invaded Yugoslavia following the 'palace coup' (encouraged by Britain) in Belgrade against Prince Paul. The Croatian Ante Pavelić became the new leader of the (Independent State of Croatia). With the Axis defeat in World War II, Croatia, together with the former annexed Italian territories of Istria and Dalmatia, were integrated into the communist Socialist Federal Republic of Yugoslavia under the communist terrorist Josip Tito. Croatia then became a federal republic within the new State.

During and after the war, the Serbian communists carried out many massacres against civilians, for example the Foibe massacres where the victims were mostly Italians, but also small number of Slovenes and Croatians, and the Bleiburg Massacres where the victims were civilians and military from different ethnic background (mostly Croatians) trying to escape the communists by escaping to Austria. Shamefully, the British handed them all over to to the communists[11].

The native Italian and Croat-Chakavian populations of Istria and Dalmatia both suffered ethnic cleansing by the Serbian communists; some were lucky and were just expelled from their lands during the Expulsion of Italians and Croats from Istria and Dalmatia, but many died in the Foibe massacres, together with a huge number of coastal and islander Croats (cleansed south-western Chakavians). The former coastal houses and related landed properties of both Italians and Chakavians at eastern Adriatic, were stolen and occupied by inland Bosnians and Serbs who immigrated there during Yugoslavia.

With the collapse of Yugoslavia, in 1991 Croatia declared independence, and a bitter and costly War of Independence had to be fought by the Croatian people and their fledgling new government against the Serbian "Yugoslav" Army, Serbian paramilitary forces and immigrant local Serbs, all of whom were determined to maintain their "Greater Serbia". Later the war mutated into a conflict between independent Croatia and the rebel local immigrant Serbs, who were being clandestinely supported by Serbia. The war finally came to an end with signing of the Dayton Agreement in 1995. The Serbs had caused great destruction across Croatia in this four year-period, mostly by artillery and some air force bombing and rocket attacks.[12][13][14]

Croatia is inhabited mostly by Croats who form about 5/6 population. Minority groups include Serbs, Bosnians, Hungarians and others. The demographic transition is completed, and the natural growth rate is minute. Life expectancy and literacy rates are reasonably high. Croatia has a post-communist economy based mostly on various services, and mostly light industry. Tourism is a major source of income, chiefly in its long Adriatic coast and numerous islands.

From 1991 post-communist Croatia became a parliamentary democracy, and the Croatian language returned in official public use (1990-2012). The formerly bicameral Croatian Parliament (Sabor) is now an unicameral legislative body of 152 representatives, elected by popular vote to serve 4-year terms. The Government (Vlada) is the executive branch composed of the prime minister, 4 deputy prime ministers and 20 ministers in charge of particular sectors of activity. The President of the Republic (Predsjednik) is elected for a 5-year mandate with a limited executive jurisdiction, but he controls the Croatian army.

As usually in post-1945 Europe, races in the Croatian censuses were not directly declared, but rather are detectable from the ethnic, religious, and other declared data. By combining these indications, the result is following:

Part of this article consists of modified text from Wikipedia, and the article is therefore licensed under GFDL.
Retrieved from "http://en.metapedia.org/m/index.php?title=Croatia&oldid=453778"
Categories: