The North Atlantic Treaty Organization (also called NATO, North Atlantic Alliance, the Atlantic Alliance, or the Western Alliance) is a military alliance, established by the signing of the North Atlantic Treaty on 4 April, 1949 as a counter-balance defence group against the Soviet Union. With headquarters in Brussels, Belgium, the organization established a system of collective defence whereby its member states agree to mutual defence in response to an attack by any external party.[1]

The organisation today is seen an American proxy force[2][3][4] strongly linked to liberalism and capitalism and by virtue of that works against the interests of all nation states in Europe, who it purports to wish to "protect".[5]

Since inception NATO has been under the ultimate control of the United States of America, the dominant power, who have very effectively used NATO as their proxy force in numerous offensive actions, contrary to NATO's 'mission statement', such as interference in the internal affairs of Libya, the invasions and destruction of Iraq, and the war of attrition in Afghanistan which lasted over 12 years. It is responsible for the murders of hundreds of thousands of innocent civilians.[6][7][8][9][10] 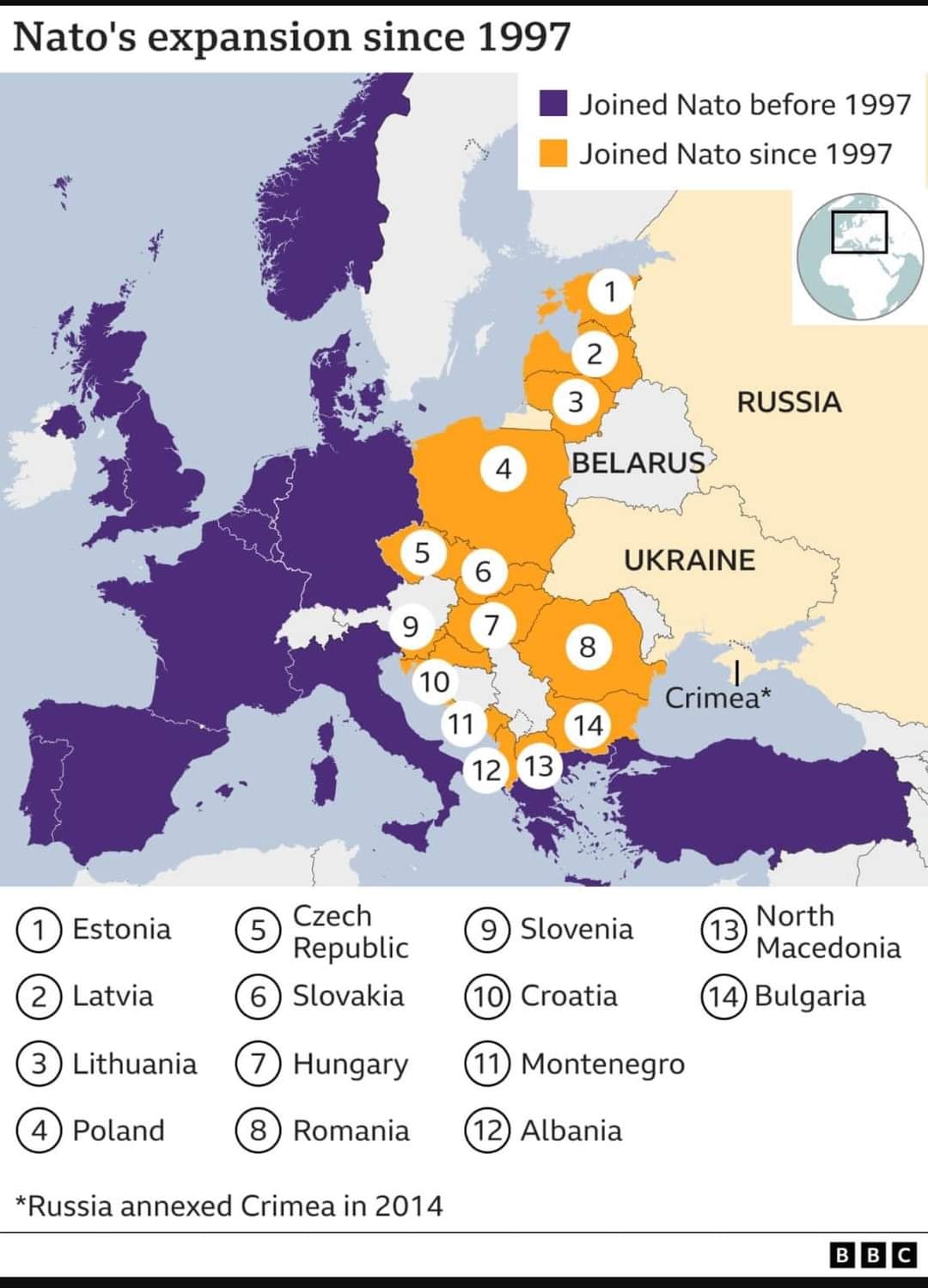 A new assessment of NATO by the United States Defence Department was released in February 1997 and published by the British-American Security Information Council, another puppet body of the USA. Included in this were proposals to expand NATO membership to include Poland (who advised that they had put aside £1 billion sterling for its contribution to joining the alliance), the Czech Republic and Hungary, and for expansion of NATO's headquarters, outside Brussels, doubling the staff from 3000 to 6000. The blueprint plan had been drawn up by Herbert van Foreest, the Assistant Secretary-General in charge of resources. The NATO summit on 8 - 9 July that year in Madrid naturally formally accepted these new members. In addition, Britain was advised that "NATO's eastward expansion [towards Russia] could cost UK taxpayers £2 billion sterling".[11][12]

In 2016 the incoming American Supreme Commander of NATO and of USA forces in Europe made an openly aggressive anti-Russia speech, as though the Cold War was still in progress. It was the clearest evidence that NATO was simply an American proxy force.[13]

Since joining NATO Poland has used the organisation to sabre-rattle provocatively against their age-old enemy, Russia.[14][15][16]

In December 2021 Russia called for NATO to remove its forces from Eastern Europe.[17]

Just prior to the UK's 1997 General Election, the Western Goals Institute in London published an article entitled Time to Get Out of NATO by Gregory Lauder-Frost, opposing the above-mentioned enlargement of NATO and arguing that "internationalism, globalism, and now NATO threaten Britain's independence in foreign policy and defence."[18]

The manoeuvering by the covert operations of USA State agencies to create violent anti-Russian agitation and unrest in the Ukraine in 2013-14, has doubtless only been made possible by America's control over NATO which it now using in its neo-Cold War approach to Russia. This USA agitation was dramatically escalated in 2021[19][20][21][22] which ultimately led to Russia invading Ukraine on 24 February 2022. NATO and/or its members are supplying military equipment to Ukraine thus helping to escalate the situation, but also to test Russia's military capabilities at the expense of Ukrainian lives.

Let's not forget what the origin of the problem is. There is no place in modern Europe for ethnically pure states. That's a 19th century idea and we are trying to transition into the 21st century, and we are going to do it with multi-ethnic states.
—Wesley Kanne Clark, US-born Jewish former NATO general, 1999.[23][24]