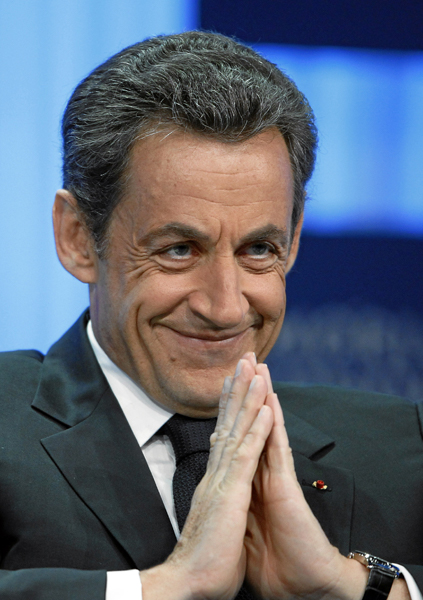 Nicolas Sarkozy during the Annual Meeting 2011 of the World Economic Forum in Davos, Switzerland

Nicolas Paul Stéphane Sarközy de Nagy-Bocsa (born 28 January 1955) is a retired French politician who was as President of France from 2007 to 2012. After leaving the presidential office, Sarkozy vowed to retire from public life before coming back in 2014, being subsequently reelected as UMP leader (renamed The Republicans in 2015). Being defeated at the Republican presidential primary in 2016, he retired from public life.

He has been charged with corruption by French prosecutors in two cases, notably concerning the alleged Libyan interference in the 2007 French elections.

Sarkozy has made statements such as "Race mixing enriches society, consanguinity destroys it" ,"The goal is to meet the challenge of racial interbreeding. The challenge of racial interbreeding that faces us in the 21st Century", "It’s not a choice, it’s an obligation. It’s imperative. We cannot do otherwise. We risk finding ourselves confronted with major problems.", "If this volunteerism does not work for the Republic, then the State will move to still more coercive measures", and "Not to intermarry racially is bad for the survival of the country."[1][2]

Part of this article consists of modified text from Wikipedia, and the article is therefore licensed under GFDL.
Retrieved from "http://en.metapedia.org/m/index.php?title=Nicolas_Sarkozy&oldid=468384"
Categories: