Vladimir Vladimirovich Putin (born 7 October 1952) is a Russian politician and a former officer of the KGB who has been President of Russia since 2012, previously holding the position from 1999 until 2008. He was also the Prime Minister of Russia from 1999 to 2000 and again from 2008 to 2012. He is considered to have been Boris Yeltsin's chosen successor and Russia's authoritarian leader since then. 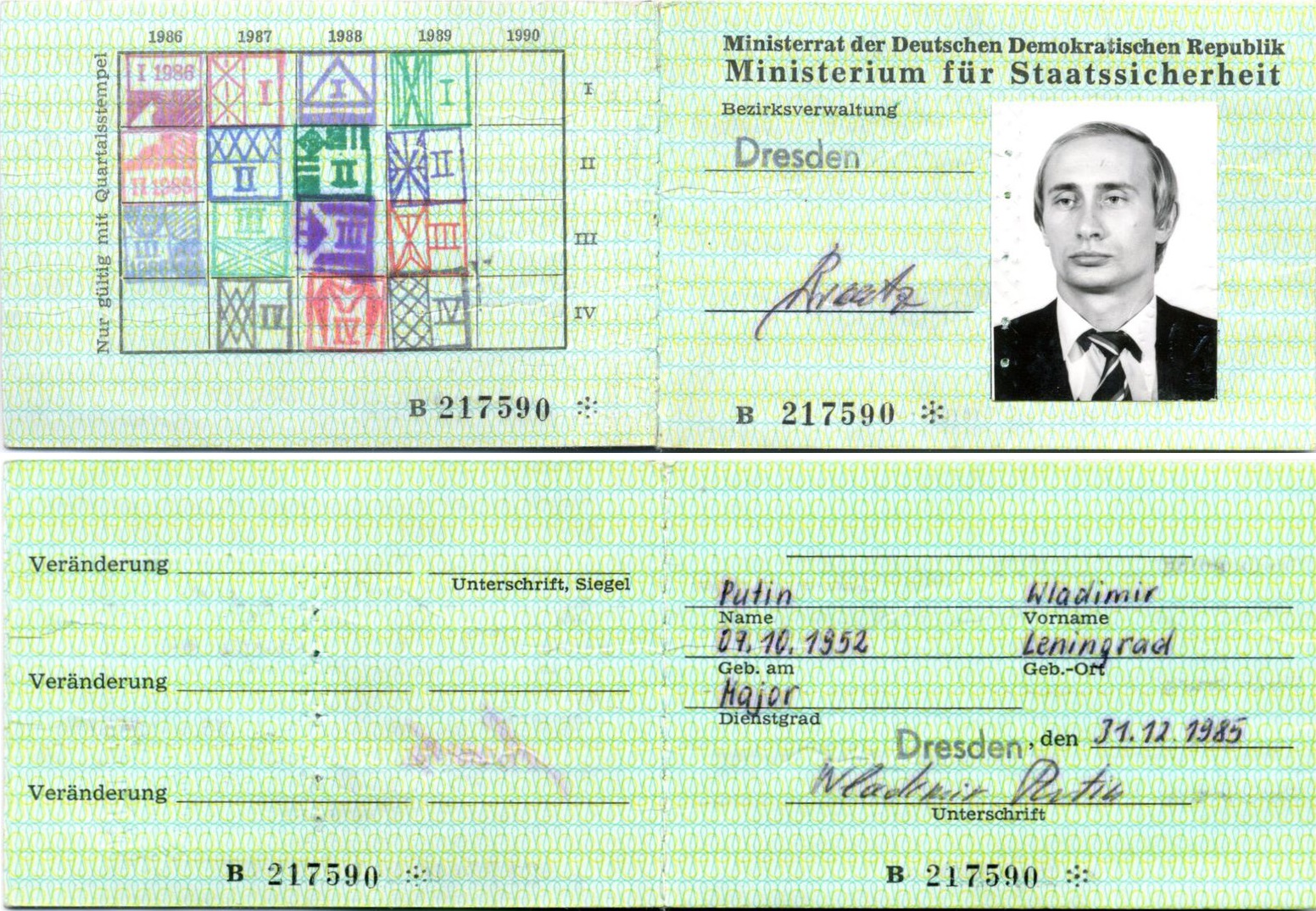 Putin's Stasi "Ausweis" (identification card). He was assigned as a KGB agent in Dresden, as a mid-level liaison to the "Stasi" (East German intelligence agency) in 1985. He held a job as a translator as a "cover" for his KGB work.

Putin is stated to have had generally friendly relations with at least Russian Orthodox Jews and Israel. Stated possible reasons include stated early life positive experiences, the very large Russian-speaking population in Israel, and this being in the interest of himself and Russia.

Politically correct sources do not mention this, but criticize the Russian government for reasons such as stated persecutions of some (sometimes Jewish) Russian oligarchs and liberals, outlawing LGBT pride parade, and various foreign interventions and claimed crimes.

Russia is stated to have unusually high corruption for a country with mostly Europeans. Putin has been associated with stated corruption, such as his first decree giving Yelstin and his family lifelong immunity from prosecution and actions associated with his Jewish childhood friend Arkady Rotenberg becoming a Russian oligarch.

Some claims regarding Putin may by problematic, for reasons such as anti-Russian and pro-Russian propaganda.

Putin made a less politically correct statement in 2013, stating that the first Soviet government was 80-85 percent Jewish. However, this was in the context of a visit to the Moscow “Jewish Museum and Tolerance Center” and criticisms of the (relatively limited) persecutions of (Orthodox) Jews.[1]

On 21 January 2015 Putin severely criticized the Soviet founder Vladimir Lenin, sharply denouncing the brutal repressions by the Bolsheviks. Putin’s assessment of Lenin’s role in Russian history was markedly more negative than in the past and he denounced Lenin and his gang of murderers for brutally executing Russia’s last Tsar Nicholas II along with all his family and servants, as well as killing thousands of priests and placing a "time bomb" under the Russian state by drawing fictitious administrative borders along quasi-ethnic lines.[2]

Some estimates suggest that the conflict in Donbas has claimed the lives of over 13,000 Ukrainians and the displacement of a further 1.5 million. The Azov Battalion, prior to the Russian invasion, had around 10,000 members. On 21 February 2022, Russian propaganda recognised the independence of Donetsk and Luhansk and subsequently sent in ‘peacekeeping forces’ to help de-Nazify the Ukraine and ‘save’ ethnic Russians.

On 24 February 2022, Vladimir Putin ordered the invasion of Ukraine. He went on to describe the invasion as a "special military occupation" and said he wants to "demilitarize" and "de-Nazify" Ukraine, rather than occupy it.[3][4]

NATO condemns in the strongest possible terms Russia's brutal and unprovoked war against Ukraine - which is an independent, peaceful and democratic country, and a close NATO partner. The Alliance calls on President Putin to stop this war immediately, withdraw all his forces from Ukraine and engage in genuine diplomacy.[5] [...] A strong, independent Ukraine is vital for the stability of the Euro-Atlantic area. Relations between NATO and Ukraine date back to the early 1990s and have since developed into one of the most substantial of NATO’s partnerships. Since 2014, in the wake of the Russia-Ukraine conflict, cooperation has been intensified in critical areas.[6]