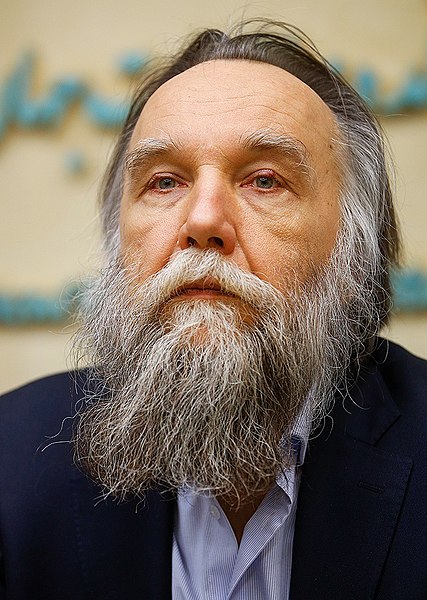 Dugin was a dissident in the Soviet Union, who was arrested by the KGB and expelled from his studies at the Moscow Aviation Institute in 1983. He continued to support his private studies in traditionalist philosophy by working as a street sweeper. He later became a journalist and joined Pamyat, the first nationalist party to emerge during the twilight years of the Soviet Union.

He became a supporter of National Bolshevism and a main organizer of the National Bolshevik Party, more recently founding the Eurasia Party. He is an influential political analyst more generally in Russia, especially regarding Eurasianist views. He is an informal advisor to Vladimir Putin.

Wikipedia very prominently alleges that he is "known for his fascist views". While he is sometimes described as having supported certain fascist (broad sense) views, possibly in particular in his early views, he has criticized various aspects of National Socialism and has stated certain race denialist views. His book The Fourth Political Theory (2009) states a theory intended to supersede liberal democracy, Marxism, and fascism.

Despite Dugin's stated pro-fascist views and stated influence on the Russian government, the Russian government, while supporting Russian civic nationalism, has banned and imprisoned individuals/organizations/books associated with fascism, White nationalism, anti-Semitism, and "Holocaust denial". One example is that the "Federal List of Extremist Materials" has banned many fascist books, both by non-Russian and Russian fascists.

Dugin has had associations with the Conservative Revolutionary movement and the European New Right, and has published a journal titled Elementy (compare Éléments).

He, especially in his youth, has been claimed to have had an interest in various esoteric views, including occultism. He has been influenced by the Traditionalist School and supports a form of the Russian Orthodox Church, but has also been claimed to have associations with Russian paganism.

Dugin is the author of many books, with several having been published in English by Arktos.

Part of this article consists of modified text from Wikipedia, and the article is therefore licensed under GFDL.
Retrieved from "http://en.metapedia.org/m/index.php?title=Alexander_Dugin&oldid=449974"
Categories: