Count Nikolai Dmitrievich Tolstoy-Miloslavsky (Russian: Николай Дмитриевич Толстой-Милославский; born 23 June 1935) is an Anglo-Russian historian and author, a member of the prominent Tolstoy family, who writes under the name Nikolai Tolstoy. He has been a parliamentary candidate for the United Kingdom Independence Party.

Tolstoy was educated at Wellington College, Sandhurst and Trinity College, Dublin. On his upbringing he has written:

Like thousands of Russians in the present century, I was born and brought up in another country and was only able to enter the land of my ancestors as a visitor in later years. It was nevertheless a very Russian upbringing, one which impressed on me the unusual nature of my inheritance. I was baptised in the Russian Orthodox Church and I worshipped in it. I prayed at night the familiar words Oche nash, attended parties where little Russian boys and girls spoke a mixture of languages, and felt myself by manner and temperament to be different than my English friends. I think I was the most affected by those melancholy and evocative Russian homes where my elders, for the most part people of great charm and eccentricity, lived surrounded by the relics - ikons, Easter eggs, portraits of Tsar and Tsaritsa, family photographs, and émigré newspapers - of that mysterious, far-off land of wolves, boyars, and snow-forests of Ivan Bilibin's famous illustrations to Russian fairy-tales. Somewhere there was a real Russian land to which we all belonged, but it was shut away over distant seas and space of years.[1]

Tolstoy has written a number of books about Celtic mythology. In The Quest for Merlin he has explored the character of Merlin, and his Arthurian novel The Coming of the King builds on his research into ancient British history. He was elected a Fellow of the Royal Society of Literature in 1979, and is an Honorary Associate Member of St. Antony's College, Oxford.

He has also written about World War II and its immediate aftermath, his books including Victims Of Yalta and The Minister and the Massacres, which criticised the British forced handover of Soviet citizens to Stalin in direct violation of the Geneva Conventions,[2] a book which was the target of strong criticism.[3] He has recently published the first volume of a biography of his stepfather, the novelist Patrick O'Brian, and is reported to be planning a second volume.

As historian of the forced repatriation of Soviet citizens and others during and after World War II, he was called by the defence as an expert witness at the trial of John Demjanjuk in Israel. In a letter to the Daily Telegraph (21 April 1988), Tolstoy said the trial and the court's procedures struck "at the most vital principles of natural justice". He condemned the use of especially bussed-in audiences, who were repeatedly permitted by Judge Levin to boo and hiss at appropriate moments. He called Levin's conduct "an appalling travesty of every principle of equity", and said that it was "a show trial in every sense of the word", even being conducted in a theatre. When eventually the United States Justice Department was found to have collaborated with the Soviet authorities in suppressing evidence that he had been falsely identified, the case against Demjanjuk was dismissed.[4]

The Foreign Affairs Committee of the Conservative Monday Club hosted a major dinner for Tolstoy at the Charing Cross Hotel in London on 26 October 1988.[5] It was an opportunity for him to put his case to a wider audience on his forthcoming libel action defence, the writ for which had already been served.

In 1989, Lord Aldington, previously a British Army officer, former Chairman of the Conservative Party, and then Chairman of Sun Alliance, an insurance company, commenced the libel action over allegations of war crimes made by Tolstoy against him (and others) in a pamphlet distributed by Nigel Watts, a man involved with Sun Alliance on an unrelated insurance matter. Although Tolstoy was not the initial target of the action, he felt honour-bound to join Watts as defendant. He lost and was ordered to pay £2 million (£1.5 million in damages and £0.5 million in costs). Documents subsequently obtained from the Ministry of Defence showed that under Government instructions files essential to the defence case had been withdrawn from the Public Record Office and retained by the MOD and Foreign Office throughout the run-up to the trial and the trial itself.[6] A full account of this complicated and convoluted trial can be found in Ian Mitchell's The Cost of a Reputation.[7] Tolstoy sought to appeal on the basis of new evidence proving Aldington had perjured himself over the date of his departure from Austria in May 1945. This was ruled inadmissible at a hearing in the High Courts of Justice, from which the press and public were barred, and his right to appeal was rejected.[8]

In July 1995, the European Court of Human Rights concluded unanimously that the British Government had violated Tolstoy's rights in respect of Article 10 of the Convention on Human Rights, although this referred strictly to the amount of the damages awarded against him and did not overturn the guilty verdict of his libel action. The Times commented in a leading article:

In its judgment yesterday in the case of Count Nikolai Tolstoy, the European Court of Human Rights ruled against Britain in important respects, finding that the award of £1.5 million levelled against the Count by a jury in 1989 amounted to a violation of his freedom of expression. Parliament will find the implications of this decision difficult to ignore. 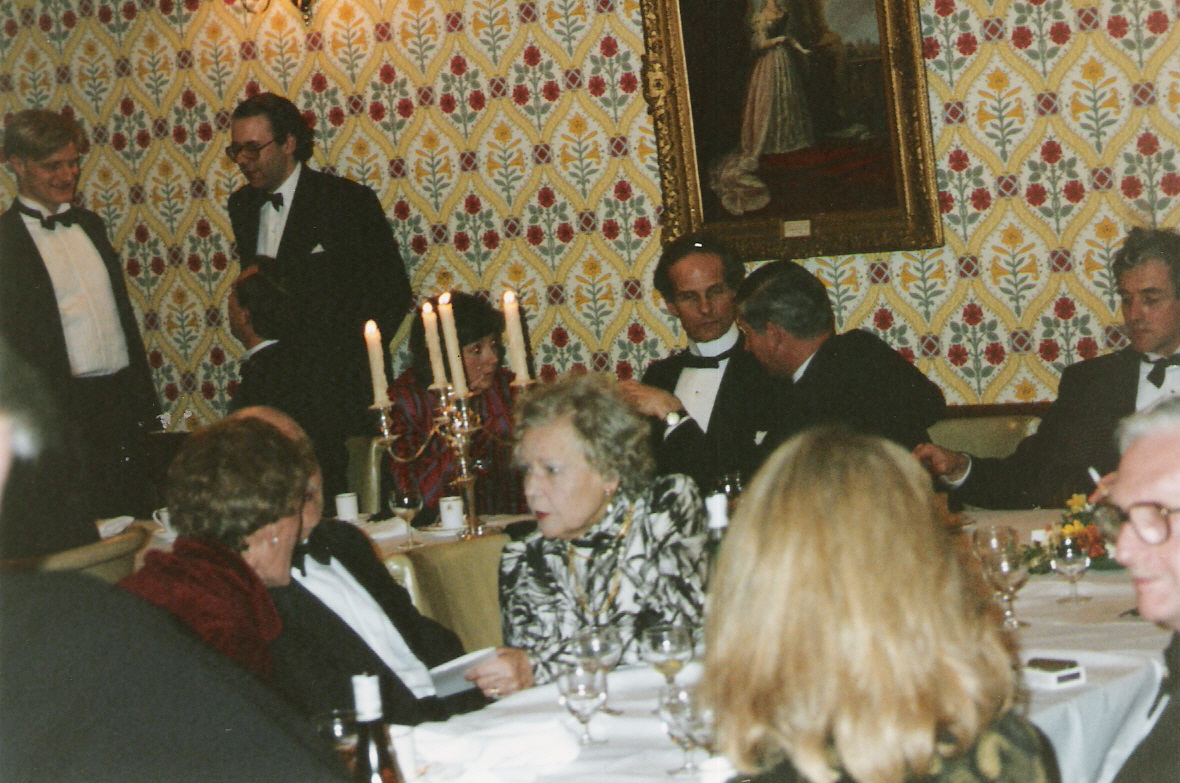 A committed monarchist, Tolstoy is Chancellor of the International Monarchist League. He was also Chairman of the London-based Russian Monarchist League, and chaired their annual dinner on 6 March 1986, when the Guest-of-Honour was the MP, John Biggs-Davison. He was also in the chair for their Summer Dinner on 4 June 1987, at the Oxford and Cambridge Club in Pall Mall. Tolstoy was a founding committee member (January 1989) of the now established War and Peace Ball, held annually in London, which raises funds for White Russian charities.

In October 1987, he was presented with the International Freedom Award by the United States Industrial Council Educational Foundation: "for his courageous search for the truth about the victims of totalitarianism and deceit."

In October 1991, Nikolai Tolstoy joined a Conservative Monday Club delegation,[9] under the auspices of the Club's Foreign Affairs Committee, which travelled to observe the war between Serbia and Croatia, the first British political delegation to observe that conflict. Conservative MPs Andrew Hunter, Roger Knapman, then Parliamentary Private Secretary to the Armed Forces Minister in the Conservative government (and from 2002 to 2006 leader of the United Kingdom Independence Party (UKIP)), and Gregory Lauder-Frost, Chairman of the Club's Foreign Affairs Committee, were also part of the delegation which, after going to the front lines in the Sisak region, was entertained by President Franjo Tudjman and the Croatian government in Zagreb. On October 13 the group held a Press Conference at the Hotel Intercontinental in Zagreb, which apart from the media, was also attended by delegates from the French government. A report on the conflict was agreed and handed in to 10 Downing Street by Andrew Hunter.

Tolstoy became an early member of the United Kingdom Independence Party (UKIP). He was approached by Alan Sked in December 1996 with a view to being a parliamentary candidate for them. Subsequently he was their candidate for the Barnsley East by-election in 1996 and for Wantage seat in the 1997 and 2001 General Elections, and the General Election in 2005. He was later selected by UKIP to stand against Conservative Party leader David Cameron in Witney at the 2010 General Election, but lost to Cameron who held his seat (due to tribal voting) becoming the new Prime Minister of the U.K.

Tolstoy's great-grandfather, Pavel Tolstoy-Miloslavsky, was Chamberlain to the last reigning Tsar, Nicholas II of Russia, who had declared his intention of creating him a Count for his services, but this was deferred due to the growing crisis in Russia during the First World War. When Grand Duke Kiril succeeded to the Imperial inheritance and rights, he granted Pavel Tolstoy-Miloslavsky the title, an elevation which was approved by the Dowager Empress Maria Fyodorovna and by Nicholas II's sisters Grand Duchesses Xenia and Olga Alexandrovna of Russia.

Tolstoy's father, Count Dimitri Tolstoy, escaped from Russia in 1920 and settled in England, marrying an Englishwoman. He entered the legal profession, was called to the bar as a barrister-at-law and was appointed a Queen's Counsel. Tolstoy is also the stepson of the author Patrick O'Brian (d. 2 Jan 2000) who bequeathed him a large inheritance. Tolstoy married in the Russian Orthodox Church, Georgina Brown (b.1948), and has four children: Alexandra (b.1973), Anastasia (1975), Dmitri (1978) and Xenia (1980).