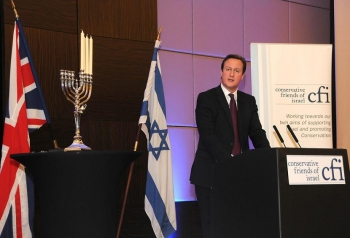 David Cameron speaking at the dinner of Conservative Friends of Israel in 2012.

David William Donald Cameron (born October 9, 1966) was the Prime Minister of the United Kingdom between May 2010 and July 2016 and leader of the Conservative Party from December 2005 until July 2016. He is pro-Israel and a member of the Conservative Friends of Israel lobby. He is held to be a social and economical liberal as well as being one of the founding signatories to Unite Against Fascism, a violent far-left-wing organization.

Cameron studied Philosophy, Politics and Economics at Oxford, gaining a first class honours degree. He then joined the Conservative Research Department and became a Special Adviser to Norman Lamont, and then to Michael Howard[1]. He worked outside politics as Director of Corporate Affairs at Carlton Communications for seven years.

A first candidacy for Parliament at Stafford in 1997 ended in defeat but Cameron was elected in 2001 as the Member of Parliament for the Oxfordshire constituency of Witney. He was promoted to the Opposition front bench two years later, and rose rapidly to become head of policy co-ordination during the 2005 general election campaign.

Cameron was viewed by some as a young, liberal candidate, who would appeal to university students and in 2005 he won the Conservative leadership election.[2] His early leadership saw the Conservative Party establish an opinion poll lead over Tony Blair's Labour; the first in over ten years. Although they fell behind shortly thereafter when Gordon Brown became Prime Minister,[3] under Cameron's leadership the Conservatives have been consistently ahead of Labour in the polls.[4] In the 2010 general election held on 6 May, the Conservatives gained the most seats, but were short of a majority, resulting in a hung parliament. Following Gordon Brown's resignation, Cameron was appointed Prime Minister after forming a coalition with the Liberal Democrats.

In 2013, he has been pressing for a United Nations invasion of Syria following the gassing of thousands of civilians by USA-Israeli mercenaries in a frame-job.[5] The UN accused the Syrian rebels of using the gas.[6] In retrospect, the US used chemical weapons in its 2005 Iraq invasion, which it did on false pretenses for Israel.[7]

After the Woolwich attack, Cameron sent around police to arrest people who complained about Muslims, immigrants, terrorists on the internet. In December 2013, he launched a new program to stop all anti-Marxism, anti-Zionism, conspiracy theories, and resistance to Jewish supremacism on the internet. Websites will be taken down. Offenders will be labelled as enemies of the state, raided by police with all electronics seized, and then thrown in prison.[8]

Even after the public backlash from mass immigration, in November 2013, he still promised to bring more non-European chefs in.[9] In fact during his premiership immigration levels hit new peaks.

In January 2014, he attempted to stop giving tax-payer funds to immigrants who use tax-payer-funded translators.[10] However since he took office about a million invaders have been granted citizenship. All the illegals have to do is hide from the police for five years, take an easy test, and then they're instant citizens.[11]

In July 2014, he claimed the British Parliament is too white, and Speaker of the House, John Bercow agreed.[12]

Cameron said, "MPs do not represent the people of Britain properly because they are too white," but he has also said, "There are so many Jews at the top of Britain’s Conservative party that it should be known as the Torah party rather than the Tory party." Jews which are only a small percentage of the population are vastly over-represented in parliament as well as every place in power due to Jewish privilege and nepotism, and Cameron says it is good and there should be more. While people who are of actual British ancestry running their own government is bad, he says, and Britain should be run by non-Britains.[13]

In July 2014, he then began firing everyone who was both male and white (both not jewish) he could find, replacing them with nonwhites and women. If anyone in Britain had specifically targetted white women or a nonwhite ethnic group, they would've been immediately forced out of their position and if they were a company owner doing this they would've been forced to sell their company.[14]

He also implemented a new "Happiness Index" by saying the more nonwhite friends and the less white friends a person has, the less "racist" they are, and the better they are.[15]