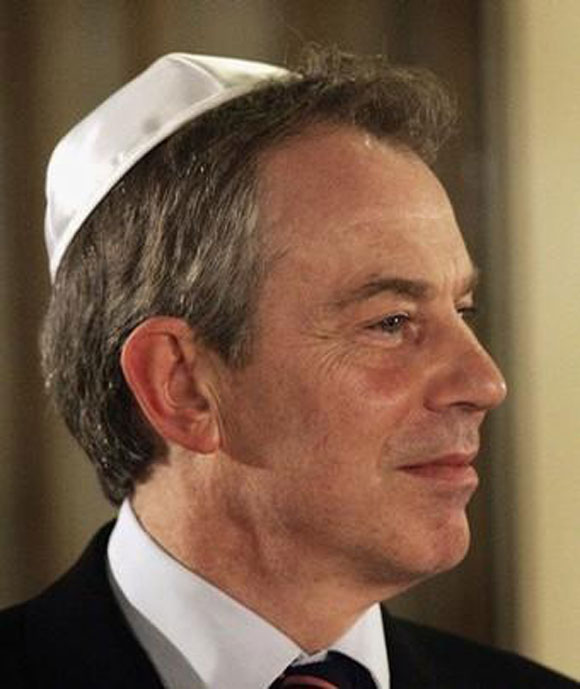 Anthony Charles Lynton Blair (born 6 May 1953) is a British Labour politician, who served as the Prime Minister of the United Kingdom from 2 May 1997 to 27 June 2007. He was the Member of Parliament for Sedgefield from 1983 to 2007 and Leader of the Labour Party from 1994 to 2007. On the day he resigned as Prime Minister, he was appointed the official Envoy of the Quartet on the Middle East on behalf of the United Nations, the European Union, the United States, and Russia.

Tony Blair was elected Leader of the Labour Party in the leadership election of July 1994, following the sudden death of his predecessor, John Smith. Under his leadership, the party adopted the term "New Labour",[1] abandoned policies it had held for decades, and moved towards the centre ground.[2][3] Blair led Labour to a landslide victory in the 1997 general election. In the first years of the New Labour government, Blair handed over control of interest rates to the Bank of England; introduced the minimum wage; signed the Belfast Agreement; introduced tuition fees; and established the Scottish Parliament, the National Assembly for Wales, and the Northern Ireland Assembly. In his first six years, Blair had British troops ordered into battle five times—more than any other prime minister in history.[4]

Blair was born in Edinburgh, Scotland on 6 May 1953, to Leo Blair and Hazel Corscadden. His paternal ancestors were the English actors Charles Parsons and Mary Augusta Ridgway Bridson, the latter of whom had some degree of aristocratic descent. Blair's father was illegitimate however and he was adopted as a baby by Glasgow shipyard worker James Blair and his wife. His mother Hazel Corscadden was of the daughter of George Corscadden, an Ulster-Scots butcher and Orangeman who moved to Glasgow in 1916 but returned to (and later died in) Ballyshannon in 1923 and Sarah Margaret Lipsett.

He supports the demographic genocide of white people[6] and fights for more immigration.[7]

Part of this article consists of modified text from Wikipedia, and the article is therefore licensed under GFDL.
Retrieved from "http://en.metapedia.org/m/index.php?title=Tony_Blair&oldid=456774"
Categories: