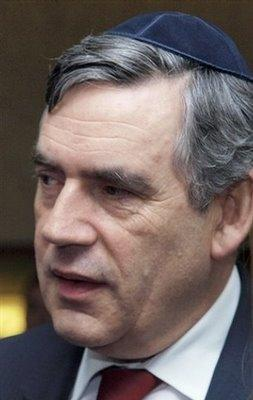 Brown has a PhD in History from the University of Edinburgh and spent his early career working as a television journalist.[1][2] He has been a Member of Parliament since 1983; first for Dunfermline East and since 2005 for Kirkcaldy and Cowdenbeath.[3][4] As Prime Minister, he also held the offices of First Lord of the Treasury and the Minister for the Civil Service.

Brown's time as Chancellor was marked by major reform of Britain's monetary and fiscal policy architecture, transferring interest rate setting powers to the Bank of England, by a wide extension of the powers of the Treasury to cover much domestic policy and by transferring responsibility for banking supervision to the Financial Services Authority.[5] Controversial moves included the abolition of advance corporation tax (ACT) relief in his first budget,[6][7] and the removal in his final budget of the 10% "starting rate" of personal income tax which he had introduced in 1999.[8]

After initial rises in opinion polls,[9] Labour performed poorly in local and European election results in 2009.[10][11] A year later, Labour achieved the second highest number of seats in the House of Commons at the 2010 general election but lost 91 seats, which resulted in a hung parliament.[12][13] On 10 May 2010, Brown announced he would stand down as leader of the Labour Party, and instructed the party to put into motion the processes to elect a new leader. On 11 May 2010, Brown officially resigned as Prime Minister and leader of the Labour Party. He was succeeded by David Cameron.[14]

Part of this article consists of modified text from Wikipedia, and the article is therefore licensed under GFDL.
Retrieved from "http://en.metapedia.org/m/index.php?title=Gordon_Brown&oldid=412646"
Categories: