"Flag of the Romani people". The flag is not recognized by all groups. The wheel/chakra symbol is similar to the wheel/chakra symbol in the Flag of India. Pro-Romani or Romani nationalist movements, groups, and lobbying are considered very politically correct forms of political activism and often given various forms of tax-paid support and special privileges in Western countries, unlike pro-White activism or White nationalism.

Gypsies are a nomadic people who have migrated from Northern India to Europe and other parts of the world.

The word "Gypsy" derives from "Egyptian". One proposed explanation is that this refers to "Little Egypt", which was an area in Greece from which Gypsies migrated further. Chroniclers sometimes thought it referred to Egypt itself.[1][2]

The word "gyp", meaning to cheat or swindle, got its meaning from the word "gypsy".[3]

Politically correct terms are Romani, Romany, or Roma which derive from the word for the people in their own language (the Romani language, Romany, Gypsy, or Gipsy). These terms are etymologically unrelated to Rome or Romania (which derives from Rome).

Another term for Gypsies is "Travellers". However, there are also several groups of indigenous European "Travellers" who, despite a somewhat similar nomadic lifestyle, are not Gypsies. The most well-known are of Irish or Scottish descent. 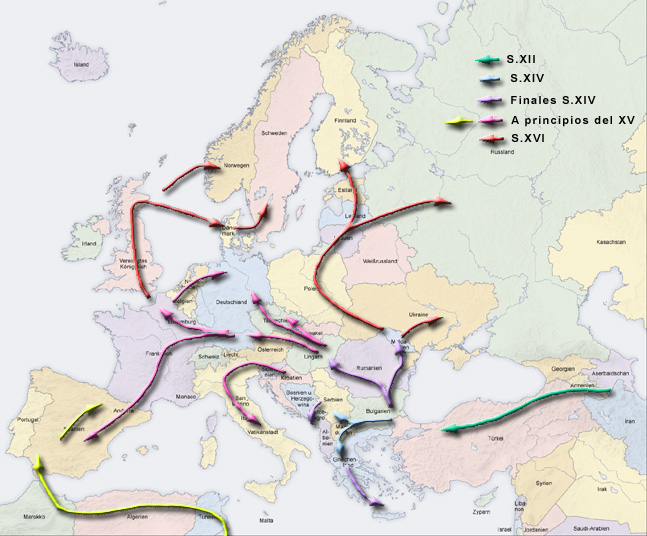 The Gypsies do not have a written history and thus most of the information about their history has been inferred, based on linguistics, genetics, and historical records of the countries where they have resided.[4]

Based on linguistic evidence, the Roma originated in North India. The term Roma is argued to be similar to a collective term for the ancient aboriginal populations of the Indian subcontinent. Many remained outcastes or tribals, but some were assimilated into the lower strata of the caste system. A 2012 study found genetic support for that the European Roma are related to these groups. An invasion of Northern India by Ghaznavids around the year 1000 may have started the migration.[5] See also the article on Caste on the origins of different castes.

Historical studies have stated that the Gypsies migrated to Europe between the 5th and 10th century. It has been argued that their migration route included Persia, Armenia, Anatolia, and Greece. The Roma then settled in multiple locations within Europe and were widespread in Europe by the 15th century; descendants of these migrants currently live primarily in the Balkans, Spain, and Portugal.[4]

Early traveling Gypsies often presented themselves as being on a pilgrimage and often presented letters which claimed authorities had given them safe passage. "The allegedly religious motivation for their journey enabled them to be received in a friendly and hospitable way. In this respect, the obligation to supply pilgrims with food, lodging and money, an obligation which was taken very seriously by medieval society, suited them very well. Entries in various books of expenses show that this Christian duty was fulfilled everywhere, at least on the Roma’s first appearance."[2]

They have also traveled from the Balkans into Western Europe in several waves, in the 19th - early 20th century, after the abolition of slavery in Rumania and more recently, after the Fall of Communism.[6] The European Union has a principle of "free movement of people", which has made it is easier to travel temporarily or to migrate permanently.

Rather strangely, in English language contexts, the German-derived term "antiziganism" may often be used instead of terms such as "antigypsyism" or "anti-Romanyism", possibly in order to cause guilt by association with the claimed Holocaust.

Despite the claimed Holocaust, Gypsies are common in Europe, as discussed below. 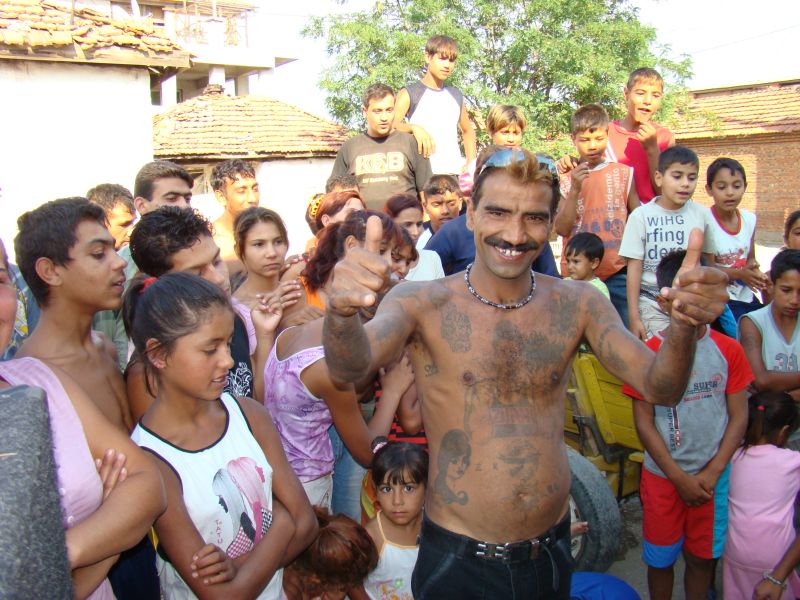 A very small size of the original population is suggested by the fact that although most of the migrants arriving in Europe in the 11th-12th century remained within the limits of the Ottoman Empire, the overall number of Roma in its Balkan provinces in the 15th century was estimated at only 17,000.[6]

Today there are 10-12 million Gypsies in Europe - a number larger than the population of several countries.[7]

Several studies of the IQ of Gypsies have found average IQs ranging from 70 to 83.[9]

The average IQs of Gypsies in different countries have been stated to be 85 in Slovenia, 83 in Slovakia, 70 in Serbia, and 60 in Romania.[7]

The Gypsies have been stated to be a low K group (see the article on the Differential K theory).[7]

The fertility is high (see above), pregnancies are one week shorter than among European women, and children are smaller at birth–both, biological traits associated with a high-fertility, r-type reproduction.[7]

The usual living conditions in Europe have been described as "Roma communities tend to be segregated and characterized by poverty, unemployment, poor education and poor quality housing. Throughout Europe, the Roma experience social exclusion, a lower life-expectancy (ten to fifteen years lower than the European average), have a higher infant mortality rate and an unemployment rate of up to 80 percent."[7]

Many attempts to improve the living conditions and/or integrate the Gypsies into the larger society has been tried. Sometimes these attempts have involved the use of force in order to settle down, educate, and assimilate the Gypsies. All such attempt have been stated to have been without success.[7]

Voluntary segregation from and crimes against non-Gypsy

Gypsies have been stated to have traditions that emphasize voluntary separation from mainstream societies. Many do not send their children to school or work alongside non-Gypsies. The culture has been accused of encouraging crimes against the non-Gypsy, often involving scams and burglaries, and often against the elderly.[12]

An article based on the book The Roma: A Balkan Underclass stated that "Gypsies are unpopular with Europeans to this day: “Many recent public opinion polls confirm that the Roma are by far the most unpopular social group, commonly considered a major burden on slender public resources.” [...] Gypsies, for their part, do not think highly of the gadjé (their term for non-Gypsies). They have a concept of ritual purity according to which gadjé are considered unclean: “[M]ost groups restrict their interaction with outsiders to economic transactions and brief encounters with officials or institutional representatives such as welfare or hospital staff.” They do not view stealing from or cheating gadjé as morally wrong. Gypsy girls are not permitted to marry gadjé, and are shunned if they do. Gypsy men occasionally take European wives, but the woman must promise to adopt Gypsy ways."[7]

A politically correct view is that Gypsy criminality is not related to the Gypsy culture, but done by a minority, which has been compared to the Sicilian Mafia within the larger population of Sicilians.[8]

The self-segregation may be a response to the cognitive demands of European society.[7]

A 2001 article described several popular forms of cons and other crimes by Gypsies in the US, involving fortunetelling, home repairs, home invasions, distraction thefts, and insurance/financial frauds. New kinds of crimes were also being developed. The article also stated that "Gypsies rarely work alone and are always in pairs or more and always use family" and "Gypsy crime is dependent upon the ignorance of the police and public alike. Mobility, disguises, false identification, lack of communication, reporting and prosecution are counted on by the Gypsies".[13]

In 2012-13, 5% of the prisoners in England and Wales considered themselves Gypsy, Romany or Traveller. In secure training centres which hold young people between 12 and 18 years old, the figure was 12%. This despite "Gypsy or Irish Traveller" only being 0.1% of the general population, according to the 2011 census.[14]

Gypsy crime gangs have been stated to traffic Gypsy children to and from countries to mug, steal and rob - using violence if necessary. The reason for keeping the children moving between different countries is so that they can not be 'traced' to the adults exploiting them. Because of their age, it is difficult for the police to arrest the minors, and even if they are spoken to they are normally let off with a caution.[15]

Thousands of Roma children were stated in 2009 to be involved in begging and stealing. Madrid police said that 95% of children under 14 that they pick up stealing on the streets are Roma from Romania. A crime boss told the BBC that many of the fabulous villas in a Romanian city were built on the proceeds of crime committed all over the world.[16]

Use of welfare system

In Central and South-Eastern Europe, an average of 46.8 percent of Roma families receive social assistance; 56.8 percent receive child support payments. In Bulgaria, 90% live on state benefits. In Britain, their "skillful manipulation of [the] benefits system has brought an outcry from the media, police, and charities for the homeless."[7]

One reason for migration to Western Europe has been stated to be much more beneficial welfare systems.[17][18]

A large 2021 survey "finds that only one in four Roma aged 16 years or older reports ‘employed’ or ‘self-employed’ [...] Roma children lag behind their non-Roma peers on all education indicators. [...] Two thirds of 18- to 24-year-old Gypsies do not have a high school diploma and have no intention of getting one."[19]