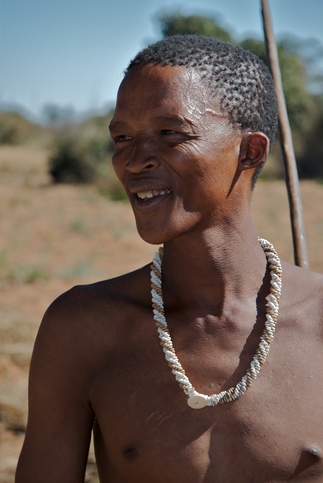 Khoisan[1] is a name for a race of black natives today mainly living in southwestern Africa, especially in the vicinity of the Kalahari Desert.

The term "Capoids" was proposed in 1962 by anthropologist Carleton S. Coon. He divided the Sub-Saharan Africans into Congoids (from an argued origin near Congo) and Capoids (from an argued origin near the Cape of Good Hope in South Africa).[2] The modern term "Khoisan" is a more recent neologism. It is a fusion of the two branches of this race: The Khoikhoi ("Hottentots") pastoralists and the San ("Bushmen") hunter-gatherers.

The Khoi Khoi were skilled in the practice of nomadic pastoral agriculture. The maintained large herds of cattle throughout the country, and evidence suggests that they migrated to South Africa from Botswana. Some moved down from the Kalahari to the Cape, while others ventured southeast towards South Africa’s high lying lands. The San, on the other hand, had territories covering regions as far afield as Botswana, Namibia, Zambia, Zimbabwe, South Africa and Lesotho.

The Khoisan together with the Pygmies and other Africans evolved from the original Homo sapiens peoples of equatorial East Africa. The ancestors of the Bushmen migrated south and by about 100,000 years ago occupied most of southern Africa. Until around 1,500 years ago, the Khoisan occupied most of southern Africa and the Pygmies occupied the rain forests of west and central Africa. From about 500 AD, the Bantu expansion from the north began to encroach on their lands, killed large numbers of them, and drove most of the surviving Khoisan into the Kalahari desert and surrounding areas and drove the Pygmies into the dense rain forests of central Africa.[3]

Many of the Khoikhoi are of mixed race with some European ancestry, which has given them lighter skin color and taller stature than the San.[3] In South Africa, the term "coloured" is used for a mixed race group with heterogeneous origins. A large share of the maternal ancestry is Khoisan according to genetic studies.[4]

Khoisanids are characterized by small stature and accompanying infantilism in bodily proportions. The females are often steatopygic. The peppercorn hair (rather than wooly, as in Congoids), the faces are flat, with prominent molars, the noses are flat and wide, and the eyelid apertures are narrow. The latter feature is frequently accompanied by epicanthic eye folds, and the superficial similarity with southeastern Asian types is sometimes striking. The skin is leathery-yellow, the hair is black and spiral-shaped, and the eyes are dark brown. Two Khoisanid varieties are sometimes distinguished (Khoid and Sanid).[5]

The Hottentots are renowned for using an extensive system of tongue clicks as part of their speech and the San Bushmen are renowned for being one of the few "pure hunter-gatherer" societies left on Earth.

The famous Kalahari Bushmen of southern Africa have long been in decline. For more than a century, the people, who speak Khoisan languages, have been pushed off their land by farmers and brutalized by colonialists. Yet for tens of thousands of years, the Khoisan's ancestors were members of "the largest population" on the planet, according to a new study. The Khoisan have long stood apart from other groups within Africa. They look distinct, speak in "click" languages, and have also maintained the greatest genetic diversity known among human populations. Usually, big populations harbor the most diversity. But census counts show that the 100,000 Khoisan speakers in Africa today are far outnumbered by other groups, such as the 45 million Bantu speakers and their 180 million descendants who now speak Swahili and other languages. Researchers have thought that the Khoisan inherited their genetic diversity from a large ancestral population, an idea supported by a single Khoisan genome published in 2012. But scientists couldn't rule out that the variation in Khoisan DNA arose from more recent interbreeding with other diverse Africans. In the new study, published online today in Nature Communications, biochemist Stephan Schuster of Nanyang Technological University in Singapore and colleagues sequenced the complete genomes of five Khoisan hunter-gatherers from Namibia and compared them with the DNA from 1462 genomes of people from around the world. Schuster's team found that two of the Khoisan, members of the Ju/'hoansi population in Namibia, inherited their DNA only from Khoisan ancestors in the northern Kalahari region and showed no sign of interbreeding with non-Khoisan speakers. These two Ju/'hoansi genomes preserve ancient diversity inherited entirely from their direct ancestors, the authors say. Using several different methods of analysis, the team reconstructed population sizes for the ancestors of the Khoisan, as well as for Europeans, Asians, and another African group, the Yoruba. They found that all four groups declined in effective population size (the number of breeding adults) between 120,000 and 30,000 years ago. The non-Khoisan groups' numbers plunged precipitously—by 30,000 years ago, European and Asian populations had plummeted by 90% from their peak, thanks to population bottlenecks caused by the migration of small groups out of Africa. But the Khoisan population declined by only 26%. (Yoruba populations dropped by 69%). The researchers uncovered declines in population in all four groups, likely tied into periods of dry climate in Africa. But the Khoisan suffered the least, perhaps because their huge ancestral population was buffered from droughts that winnowed other groups, such as the Yoruba and the African ancestors of Europeans and Asians, because the Khoisan lived farther south in Africa where rainfall actually increased. The Khoisan then began a more drastic decline in the past 20,000 years or so, with a major blow when the Bantu farmers spread through Africa 4000 years ago.[6]