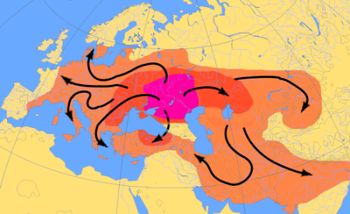 Migration of the Indo-Europeans, an ethno-linguistic group of people who, according to the Kurgan hypothesis, lived around 6000 - 4000 BC in an area corresponding to modern day Ukraine, Russia, and Georgia, before they invaded Europe, Iran and Northern India, and bringing with them new technology, customs, religious beliefs, and Indo-European languages. The term Aryans refers to Indo-Europeans or certain more specific Indo-European peoples.

The Indo-Europeans, also known by the terms Aryans, Kurgans, Indo-Germans[1]., and Western Steppe Herders, were a ethno-linguistic group of people who lived sometime around 6000 - 4000 BC in an area corresponding to modern day Ukraine, Russia and Georgia before they invaded Europe, North Africa, Iran and North-India, pushing away the matriarchal belief systems and bringing with them a subset of customs and religious beliefs that can still be found amongst most populations of these areas today. Prior to migrating, and the divergence of Indo-European branch languages, the Indo-Europeans were collectively settled in a single territory speaking a single language, reconstructed by modern linguists as Proto-Indo-European. The ancient North-Indians, Thracians, Dacians, Balts, Greeks, Germans, Georgians, Slavs, Celts, Hittites, Persians, Tocharians and other Indo-Europeans were among their descendants.

The Proto-Indo-Europeans were largely ancestral to the Nordid (Nordic) racial type, according to Carleton Coon (1939: 221):

"Indo-European languages were, at one time, associated with a single, if composite, racial type, and that [...] racial type was an ancestral Nordic."

It appears that around the Black Sea region, the Proto-Indo-Europeans depigmentated, and that Indo-Europeans were mostly responsible for introducing blonde hair and light eye pigmentation across Europe and parts of Asia. The Black sea region, has further been tracked as where the first blue eye mutation occurred. Professor Hans Eiberg from the University of Copenhagen has recently noted (2008):

"Blue eye colour most likely originated from the near east area or northwest part of the Black Sea region, where the great agriculture migration to the northern part of Europe took place in the Neolithic periods about six–10,000 years ago."[2]

G. D. Kumar (1973) found a Nordic element in the Indo-European skeletal remains at several sites of the Mature Harappan period as well as in Western Asia.

Prior to migrating, and the divergence of Indo-European branch languages, the Indo-Europeans were collectively settled in a single territory speaking a single language, reconstructed by modern linguists as Proto-Germanic or Proto-Indo-European.

The Indo-Europeans were often not the only people in the regions they penetrated and they therefore implemented a caste system. This is still important in India. In modern India, high caste individuals are genetically distinct from low caste individuals, both due to endogamy and due to elevated Indo-European ancestry in South Asians of higher caste. This trend is true in all parts of the country when you compare high caste Indians to lower caste Indians of the same region. Skin color also correlates with higher caste, with light skin tones being more common among more elite castes[3] There were also divisions among the Indo-Europeans. See the article on the Trifunctional model.

Possible causes of the Indo-European expansion

The book Understanding human history: An analysis including the effects of geography and differential evolution argued that

"Nor can it be maintained that their remarkable early expansion was due to their possession of superior technology. Quite a few of the peoples they conquered — including the Minoans, the Etruscans, the Elamites, and the Dravidian-speakers of the Indus Valley — had more advanced civilizations than the Indo-European invaders did. It is likely that the some of the early conquests of the Indo-Europeans were due in part to their use of horses; but this could hardly account for their conquest of Crete, Britain, Switzerland, and Scandinavia. Nor would it account for their triumphs over the Egyptians and Babylonians, both of whom had been using horses in warfare for many centuries. The simplest explanation is that the original speakers of PIE possessed, on average, considerably higher intelligence than most of the peoples they defeated".[4]

The same book argued on the achievements of Ancient Greece that

"The best explanation for the Greek phenomenon lies in a combination of genetic and geographic factors. [...] because of the mild climate in the Middle East, and the availability of a large assortment of useful domesticable plants and animals, the inhabitants of the Middle East developed agriculture long before the peoples of northern Europe. The early advent of agriculture and cities in the Middle East enabled them to make major progress during the Neolithic Era and the early historic era, and to get a big jump on the rest of the world in technology and in intellectual matters. In time, the superior genetic endowment of the Europeans would enable them to overcome that head start. However, between European groups, the one most likely to advance first was the one which had the earliest opportunity of learning from the civilizations of the Middle East and Egypt. Because of their geographic location, the Greeks were the first European people to come into contact with those civilizations. [...] What about the Hittites? [...] were a rather small group numerically, and their genes were soon swamped by those of the much larger indigenous population with whom they interbred. [...] In Greece, there were several waves of invaders, and they entered a mountainous land where the indigenous population had been fairly small. Hence, the gene pool of the classical Greeks was derived mostly from that of the Indo-European invaders, and the average IQ of the resulting population was high."[4]

The book The 10,000 Year Explosion: How Civilization Accelerated Human Evolution argued that an important explanation for the Indo-European expansion was that they were among the first to have genetic adult lactose tolerance, allowing adults to drink milk and to much better utilize cattle.

"The authors think it may have been because they were among the first to be lactose tolerant, and this changed their society in several important ways. First, because it is much more nutritionally efficient to milk cattle as well as eat them, the first milk drinkers could produce denser populations than farmers or other herders. Also, cattle are both valuable and portable — they transport themselves — so herders inevitably become rustlers, which leads to a warrior tradition. Farmers, who had to defend fixed targets, were no match for mobile cattlemen who could attack wherever and whenever they liked. Finally, milk-drinkers had a better diet; there is evidence that Indo-Europeans were up to four inches taller than the people they overran.

The Indo-Europeans appear to have gone on a conquering spree that lasted several thousand years. They are likely to have been a dominant elite that forced their culture on subject peoples but then moved on before they were absorbed. The strong, established states of the Middle East managed to fend them off, but Indo-Europeans were invincible in colder areas where the growing season was short and their superior diet gave them the greatest advantage.

Professors Cochran and Harpending point out that there was yet another independent development of lactose tolerance, which took place on the Arabian Peninsula among drinkers of camel milk. They suspect that the same results — good diet, mobility, a tradition of raiding — helped the Arabs achieve their remarkable sweep across North Africa and into Europe that was stopped only in 732 — by other milk drinkers."[5]