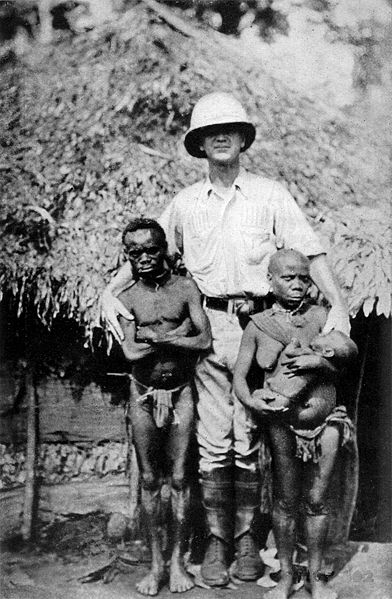 African Pygmies and a European explorer.

Pygmies usually refers to related groups of African pygmies, but may also more generally refer to all groups whose average height is unusually short, such as Asian Negritos.

Various evolutionary explanations for the short height have been proposed.

A 2011 study stated that the average IQ of Pygmies was estimated to be approximately 53.[1]

The African pygmies are geographically scattered, likely reflecting that they once inhabited a much larger area, but have been partially displaced/killed by other groups, such as during the Bantu expansion. In the Republic of Congo, where Pygmies make up 2% of the population, many Pygmies live as slaves to Bantu masters. The country is deeply stratified between these two major ethnic groups. Racist views and discrimination by Bantus have been stated to be common. In association with the wars in Congo, the Minority Rights Group International stated that there is extensive evidence of mass killings, cannibalism and rape of Pygmies and they have urged the International Criminal Court to investigate a campaign of extermination against Pygmies.

Part of this article consists of modified text from Wikipedia, and the article is therefore licensed under GFDL.
Retrieved from "http://en.metapedia.org/m/index.php?title=Pygmies&oldid=439062"
Categories: