From Metapedia
(Redirected from Mixed race)
Jump to: navigation, search 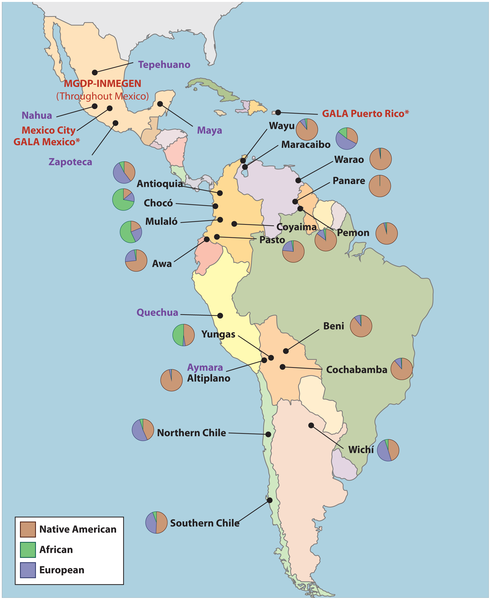 The map shows the proportions of African, Amerindian, and European racial ancestry in various populations in Latin America according to a 2012 study.[1]

Miscegenation is a term referring to sexual relations, and related aspects such as marriage and offspring, between individuals of different races. Contemporary usage of the term is less frequent than it once was, and the term is sometimes considered to be politically incorrect. Similar terms include "race defilement", "race mixing" and "interracial".

Miscegenation: The Theory of the Blending of the Races, Applied to the American White Man and Negro was the name of a propaganda pamphlet printed in New York City in December 1863, and the first known instance of the word's use.

The pamphlet purported to be in favor of promoting the intermarriage of whites and blacks until they were indistinguishably mixed, claiming this was the goal of the Republican Party. The pamphlet was revealed to be written by anti-Lincoln Northern Democrats ("Copperheads") to discredit the Republicans, the Lincoln administration, and the abolitionist movement.

Some radical elements of the abolitionist movement did in fact did support the goals of the pamphlet, but it was largely because miscegenation was so repulsive to the common man that this propaganda was effective.

It is today possible to genetically test mixed race individuals/groups and objectively determine the different racial ancestries and how much each racial ancestry contributes.