The Passing of the Great Race

The Passing of the Great Race or The Racial Basis of European History is a book written by Madison Grant.

The book was originally published in 1916, but Wermod & Wermod Publishing Group have through their imprint The Palingenesis Project updated the text to modern standards by adding bibliographical data, index, explanatory footnotes and system of citation. The preface of the book is written by Jared Taylor, editor of the magazine American Renaissance, among other positions.

Regarding background, see the articles on Nordicism and Madison Grant.

The book presents Grant's view on Europeans, argued to consist of three branches, namely the Alpine, Nordic and Mediterranean races. The book details both the argued earliest known beginnings of the these groups, and follows their development all the way up to the time of the publishing of the book. Grant viewed the immigration into the US of different groups as not beneficial. With the proportional immigration law of 1924, the descendants of the founding Americans won a victory which would last 40 years, until senator Ted Kennedy after pressure from various special interest groups, especially Jewish groups, put this law out of effect with the new immigration laws of 1965 (see the book The Culture of Critique for a detailed description of this by Dr. Kevin MacDonald), but for a time this book (along with the works of his friend Lothrop Stoddard) helped set the national mood that helped secure the immigration restrictions of 1924. The book was translated into several European languages in its day.

From the flip of the book 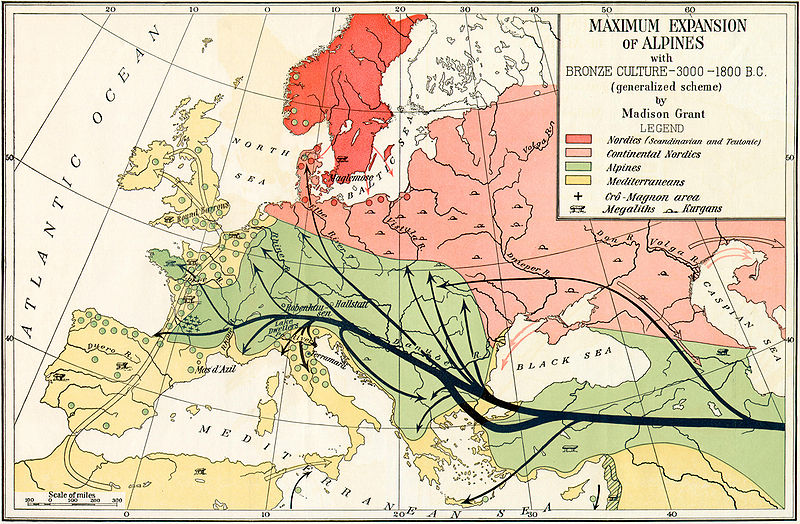 "Maximum Expansion of Alpines" — Map from Passing of the Great Race showing the essentially peasant Alpine migrations into Europe. 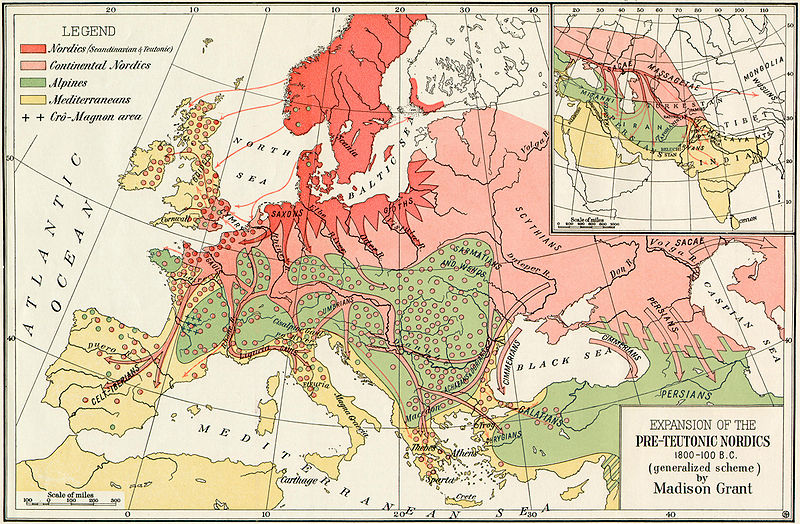 "Expansion of the Pre-Teutonic Nordics" — Early Nordic influence spreading over the continent. 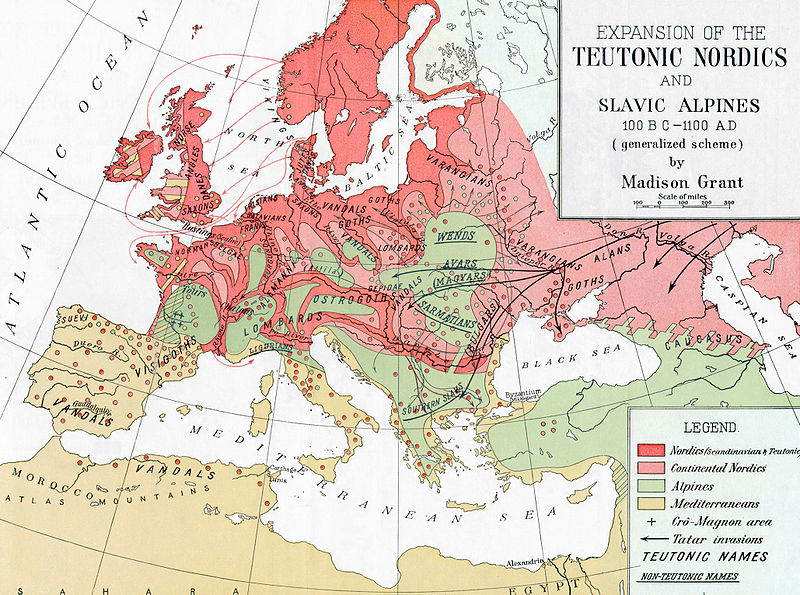 "Expansion of the Teutonic Nordics and Slavic Alpines" — Further Nordic expansion, as well as the Alpines. 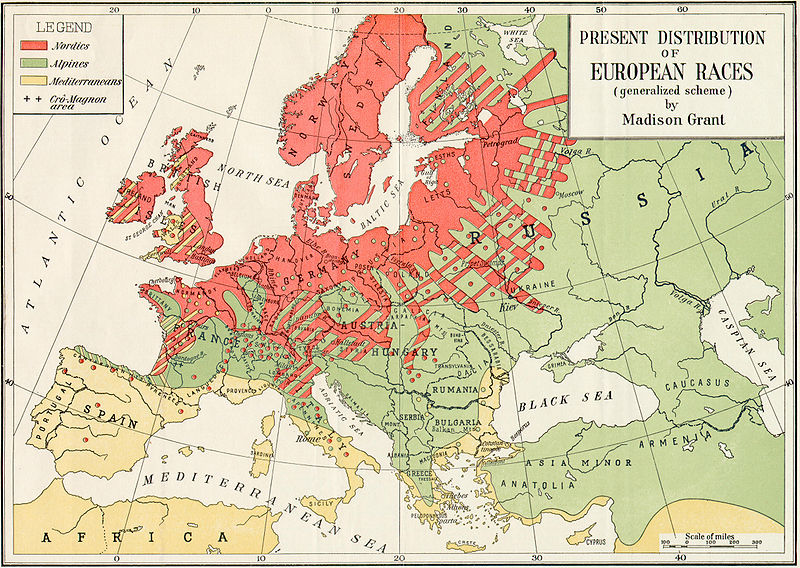 "Present Distribution of the European Races" (1916) — Grant's vision of the status quo, with the Nordics in red, the Alpines in green, and the Mediterraneans in yellow.

"The Passing of the Great Race is one of the most prominent racially oriented books of all times, written by the most influencial American conservationist that ever lived. Historically, topically, and geographically, Grant's magnum opus covers a vast amount of ground, broadly tracing the racial history of Europeans from prehistoric times to the present, with an emphasis on the need to preserve the northern European type and generally improve the race—for Grant was, logically, a proponent of eugenics. Generally well received at the time in both the popular and scholarly press and going through four editions and multiple reprints, Theodore Roosevelt described The Passing of the Great Race as 'a capital work'. Along with Lothrop Stoddard, Grant was probably the single most influential creator of the national mood that made possible the immigration control measures of 1924. The Passing of the Great Race remains one of the foremost classic texts of its kind.

This new edition supercedes all others in many respects. Firstly, it comes with a number of enhancements that will be found in no other edition, including: an introductory essay by Jared Taylor (of American Renaissance), which puts Grant's text into context from our present-day perspective; a full complement of editorial footnotes, which correct and update Grant's original narration; an expanded index; a reformated bibliography, following modern conventions of style and meeting today's more demanding data requirements. And, secondly, great care has been placed on producing an aesthetically appealing volume, graphically and typographically, as befits a classic text ultimately arguing for quality rather than equality."[1]

"Madison Grant (1865 - 1937) was an American lawyer, historian, physical anthropologist, conservationist, and eugenicist. Born in New York city, he graduated early and with honours from Yale University and subsequently received his law degree from Columbia Law School. He is best known for his work as a conservationist, credited with the saving of many different species of animals, founding many different environmental and philanthropic organizations and developing much of the discipline of wildlife management. The Passing of the Great Race (1916) is his most famous work"[2]

Said of the book

"Some hundred years after its publication, what strikes me about The Passing of the Great Race is not just its originality - as a racial history, it was the first of its kind - and not just Grant's skill in integrating the most advanced evolutionary science of his day with studies of history and culture. And it's not even the book's startling fundamental premise - that race grounds culture, religion, and the state (and not the other way around.) Instead, what strikes me is that Grant stood steadfastly and openly as an Anglo-Saxon willing and ready to defend his people, culture and class. If Grant's elite had predominated in North America, it is no exaggeration to say that the history of the 20th century would have been altogether different" - Richard Spencer, Alternative Right, National Policy Institute.

"Whether or not one agrees with his theories, Madison Grant's work continues to remind us of the genuine, time-less issues at stake beneath the day-to-day political rhetoric of our times. He understood that race and culture are inseparable, since the latter can only take root in the former. This book remains a compelling argument for the defense of unique racial identities in opposition to the homogenization being promoted by liberalism and multiculturalism" - John Morgan, Arktos Media.