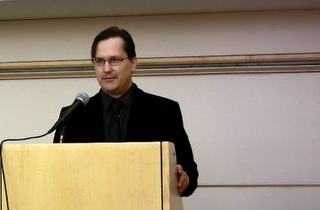 He has written for various publications, including Taki's Magazine[1] and The Occidental Quarterly.[2]

Kurtagić was born to a Croatian father of Slovenian stock. His grandparents on his mothers side had eleven children.[3] His parents moved around a lot (with his father being a computer scientist[4]), residing in numerous countries and Kurtagic himself has lived in five countries, "both in the First and Third Worlds, located on both sides of the Atlantic."[5]

He has lived in Latin America during the 1970's and 1980's, Madrid in Spain for a few years, the Netherlands, Austin, Texas in the United States in 1975 and 1976 but has since settled in the United Kingdom.[4] He is a multi linguist, speaking, English, Spanish and French, amongst others.[3]

Kurtagić went through the U.S. educational system in both university and highschool and completed his post graduate work in a British university.[4]

In October 2013 Kurtagic was one of the speakers at the Traditional Britain Group's Annual Conference in Mayfair, London, the theme being "The Future of the Nation State".

Kurtagić is the man behind the Black Metal project, Benighted Leams, an Ambient Black Metal band created in 1995 by him. He has put out four albums on his own Supernal Music label. Kurtagić performs all instruments & vocals, apart from on the fourth album (which saw Wulfhild join the fold) of which the lyrics for tracks 2, 3, 5, and 6 were written by Wulfhild. They deal with twisted phobias, like fear of heavy objects causing floors to collapse, pathophobia, alopaecia, and so forth).[6]

Kurtagić is the only person in the Black Metal scene, as of 2011 to have released a track about a university professor (Kevin MacDonald).[7]

The band participated in the "Anti-Geldorf-Compilation" by Supernal Music playing the exclusive song "Believe, Submit, Obey".[8]

Kurtagić also did the cover art and co-composed, alongside Aphazel, one track on the Norwegian band, Ancient's, "The Cainian Chronicle" 1996 album, the track being number 5, "At The Infernal Portal (Canto III)."

Supernal Music is a small record label based in England and founded in 1996 by Kurtagić; it was mainly known throughout the late 1990s for its mail order catalogue of underground music, particularly extreme metal.

Their online store went up in 2000, and was the first dedicated online extreme metal store in the United Kingdom. Supernal Music specialises mainly in black metal, but related genres are also represented in its releases and both past and present roster of artists, including doom metal and dark ambient. Supernal Music's mail order catalogue and online store extends this list further across thousands of often rare and obscure titles to cover death metal, gothic metal, goregrind, and experimental.

Kurtagić has described the label as providing "a way of resisting the rootless, capitalist, cosmopolitan dystopia where everyone drinks Coca-Cola, eats McDonalds, watches Hollywood films and sitcoms, reads Hello!, knows what's the number one single, keeps track of airhead celebrities and other such creatures, believes Associated Press propaganda, and thinks like all the other simple-minded boobs that the modern world is just oh so wonderful."[9]

Kirtagic is the owner of the independent publisher Wermod and Wermod Publishing Group which currently has two imprints: Iron Sky Publishing and The Palingenesis Project.[10] He is friends with Troy Southgate and publishes his works.[11]

From January 2011 he became co-editor, with Richard Spencer, of AlternativeRight.com.

In 2009 he published his Right-wing dystopian novel, Mister which has a foreword by professor Tomislav Sunić[15] and is currently working on his second novel about National Socialist UFO’s.[16] 'Mister' is a re-write of a previous novel that he wrote in 1983. In 2003 he decided to redo the novel completely and the 2nd edition he decided to make it political and dystopian.[4]

He also produced the cover art for 'Mister', 'The Revolt Against Civilization: The Menace of the Under-Man'[17] and 'The French Revolution in San Domingo'[18] by Lothrop Stoddard, as well as coverwork for various black metal album releases.[19]

A previously unpublished article of his also featured in 'The Radical Tradition: Philosophy, Metapolitics and the Conservative Revolution', edited by Troy Southgate, 'Yockey and the Cancer-Growth Economy' in The Occidental Quarterly. Volume 10, Number 3, Autumn 2010 and 'Black Metal: Conservative Revolution in Popular Culture' in The Occidental Quarterly. Volume 10, Number 1, Spring 2010.

Kurtagic's forthcoming novel will be titled 'Antarktos'. It is described as a "companion volume to his seminal dystopian opus, Mister, but not a sequel." This novel will "contain both utopian and dystopian elements; it will also be longer and a much more ambitious work than its predecessor. It will develop some of the esoteric themes touched upon in Mister, drawning inspiration from the writings of Miguel Serrano and Savitri Devi. It will also explore concepts relating to the Conservative Revolution and the Völkisch Movement within a Science Fiction framework."[20]

In addition to these publications, his essays, articles, and reviews can be found in The Occidental Quarterly, Vdare, Counter Currents, Taki Mag, and American Renaissance.