Afrocentrism, Afrocentricity or Africentrism is a pro-black ideology emphasizing the claimed suppression of the importance of blacks in various historical events. The myth was invented by Molefi Asante, as a way to "escape Eurocentrism and its extensions", by looking at the world from an African standpoint against all actual facts, thereby forging a distinctive view of the world by reconstruction, the basic function of all myths.

Examples of Afrocentrism include claims that various ancient civilizations, such as Ancient Egypt, were created by blacks. Many of the claims are rejected by mainstream historians, but as being politically correct, these claims may despite this be disseminated at, for example, universities.

"A favorite Afro-centric fantasy is that the ancient Egyptians were black. In 1990, when news began to seep out that many black “academics” were making this claim, columnist John Leo of U.S. News & World Report telephoned seven prominent Egyptologists to get the expert view. To a man, they agreed that neither the pharaohs nor the common people of ancient Egypt were black or negroid, but not one was willing to be quoted. As one explained, the question was “politically too hot;” people can get in trouble for disagreeing with the most preposterous foolishness if it happens to be asserted by a large number of blacks."[1]

A 2000 article, criticizing Afrocentric claims made by teachers at City University of New York (CUNY) campuses, also stated that

"The students at Medgar Evers College–as well as those of many other CUNY campuses–will graduate thinking that half the world’s geniuses were black and that today’s civilization owes its existence to the efforts of Africans. They will believe that the “white man” has conspired to hide African accomplishments as part of his effort to “subjugate” blacks."[2]

Not Out Of Africa

The US-American classicist Mary Lefkowitz, author of Not Out Of Africa (New York 1996, paperback edition 1997), is the Andrew W. Mellon Professor in the Humanities at Wellesley College. She is the author of many books on ancient Greece and Rome, including Lives of the Greek Poets and Women in Greek Myth, as well as articles for the "Wall Street Journal" and the "New Republic". She is the coeditor of Women's Life in Greece and Rome and Black Athena Revisited.

Not Out of Africa has sparked widespread debate over the teaching of revisionist history in schools and colleges. Was Socrates black? Did Aristotle steal his ideas from the library in Alexandria? Do we owe the underlying tenets of our democratic civilizaiton to the Africans? Mary Lefkowitz explains why politically motivated histories of the ancient world are being written and shows how Afrocentrist claims blatantly contradict the historical evidence. Not Out of Africa is an important book that protects and argues for the necessity of historical truths and standards in cultural education. For this new paperback edition, Mary Lefkowitz has written an epilogue in which she responds to her critics and offers topics for further discussion. She has also added supplementary notes, a bibliography with suggestions for further reading, and a glossary of names. 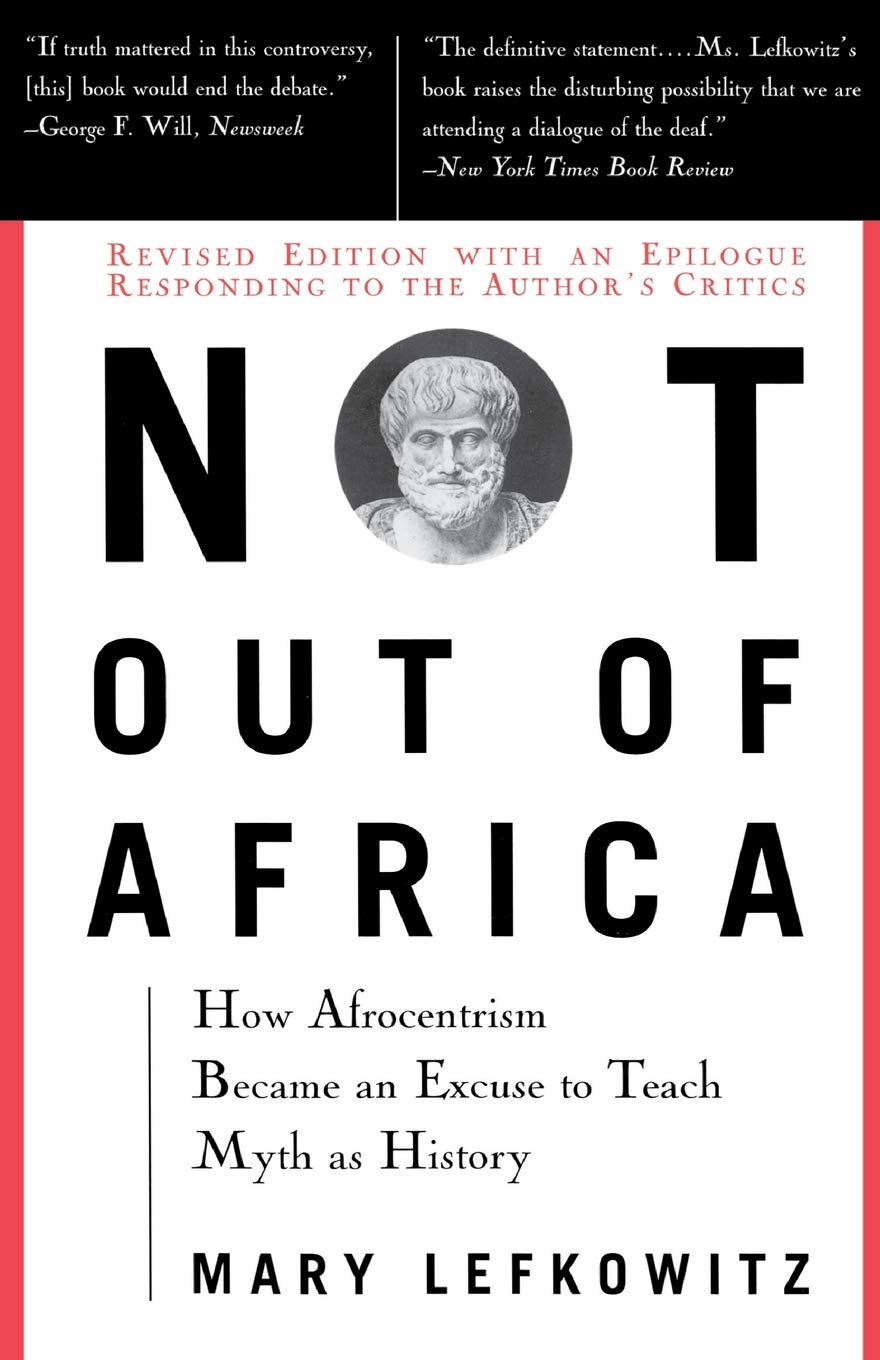 When Lefkowitz first encountered Afrocentrism in 1991, she was appalled. She discovered that there were people writing books and teaching that Greek civilization had derived from, or had even been “stolen” from Egypt. They were making claims that the Ancient Egyptians were black, as were Socrates, Cleopatra, and other important cultural figures in the Ancient World. They maintained that Greece had been invaded from Africa in the Middle of the 2nd millennium, that Greek religion and mystery systems were based on Egyptian prototypes and that what was called “Greek” philosophy was in fact the secret wisdom of Egyptian lodges of a Masonic type. She also discovered that these arguments were being supported by gross errors of fact, such as the idea that Aristotle had plundered the Egyptian library at Alexandria as a basis for his own massive philosophical and scientific writings. In fact, of course, the library at Alexandria was founded by Macedonian Greeks at least 30 years after Aristotle’s death. She explained that the spreading of the myths occurred because Afrocentric literature was widely read and that it was being undiscerningly taught, not merely in a number of school districts but also in some universities. Furthermore, when she had attempted to question Afrocentric speakers on her own campus (Wellesley) she had been rudely rebuffed. Even worse, when she appealed to colleagues for help they often failed to support her. Their ostensible grounds for this reluctance was the relativist position that as all history is fiction, there was room for many different stories. Thus, for them Afrocentrist history was no less true than the classicists’ version of the roots of Greek civilization. However, Mary Lefkowitz believes that another and more significant reason why her colleagues let her down, was the fear of being labeled as racist. She comprehends the Afrocentrists as living in a sealed off intellectual ghetto, impervious to outside information, where they pay no attention to the truth of their propositions but are purely concerned with the “feel good” factor and boosting the low self-esteem of African-Americans. While she has some respect for this motive, she denies that it has any place in the writing and teaching of history which must always remain objective. Thus, she has felt obliged to stand up and be counted against what she sees as the Afrocentrist assault on the basic principles of education, respect for the facts, logical argument and open debate. She shows how the belief in an “Egyptian Mystery System” has its origins in a now forgotten, but once widely influential work of fiction, Séthos, a Bildungsroman by the Abbé Jean Terrasson, first published in 1731.[3] Mary Lefkowitz reiterates Arthur M. Schlesinger Jr.’s charge that Afrocentrist history is purely an attempt to promote group self-esteem, whereas history should consist of: “dispassionate analysis, judgment and perspective [...]” Schlesinger (1917–2007), historian, social critic, and public intellectual, charged that ‘Afrocentrism’ isolated both African scholarship and people of African ancestry from the rest of humanity. He expressed the views of many when he stated:

In his book The Disuniting of America: Reflections on a Multicultural Society (1991), Schlesinger Jr., a former advisor to the John F. Kennedy and other US administrations as well as winner of the Pulitzer Prize, states that a new attitude, one that celebrates difference and abandons assimilation, may replace the classic image of the melting pot in which differences are submerged in democracy. He argues that ethnic awareness has had many positive consequences to unite a nation with a "history of prejudice". However, the "cult of ethnicity," if pushed too far, may endanger the unity of society. According to Schlesinger, multiculturalists are "very often ethnocentric separatists who see little in the Western heritage other than Western crimes." Their "mood is one of divesting Americans of their sinful European inheritance and seeking redemptive infusions from non-Western cultures."[4]