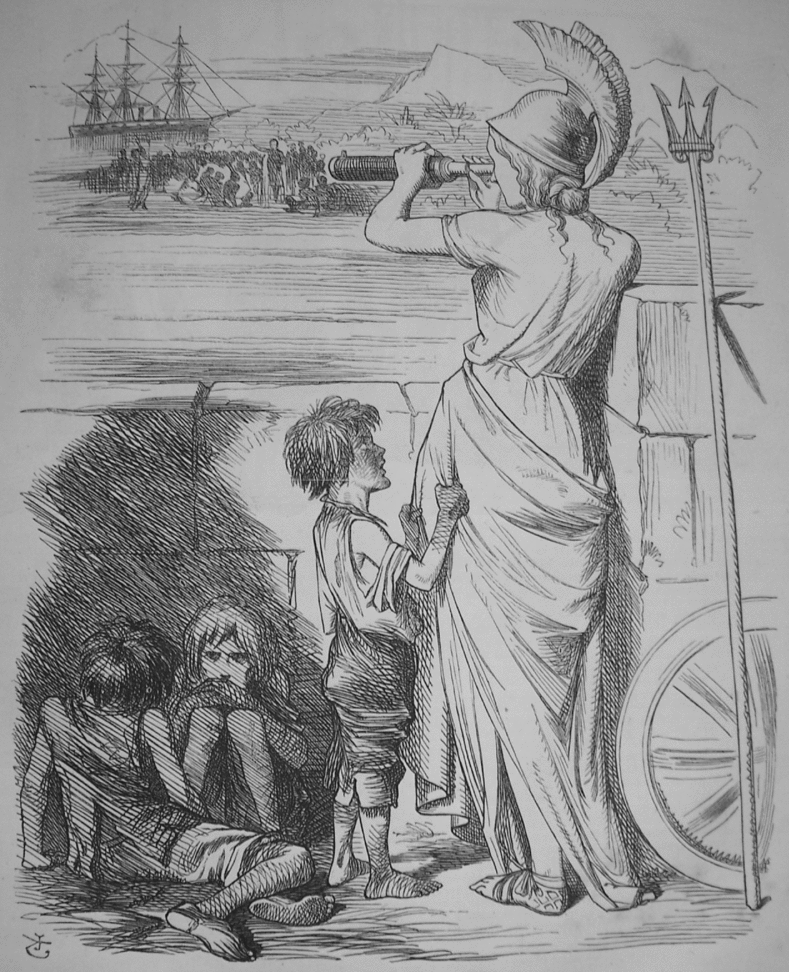 Victorian-era cartoon from Punch; "Please 'm, ain't we black enough to be cared for?"

Telescopic philanthropy is a term coined by Charles Dickens. Dickens reserved particularly harsh criticism for individuals who styled themselves as philanthropists, but whose charitable motives were to serve their own vanity by high-status projects in exotic and faraway places, while ignoring less prestigious problems at or near home.

"In his 1852-3 novel Bleak House, Charles Dickens popularised the term telescopic philanthropy He used the term, and stories within the novel, to criticise Victorian support for charitable projects afar whilst nearer to home millions of people were stuck in poverty. In the novel, Dickens brings in two characters, a Mrs Jellyby and a Mrs Pardiggle, both of whom have a zeal for Victorian philanthropy but at the expense of others. Jellyby ignores those closest to her whilst Pardiggle is bullying and harangues people into adopting her help. For both, philanthropy is more of a profession than born of genuine motivations to help."[1]

Chapter XII of Dickens novel Pollyanna contains a striking depiction of telescopic philanthropy. When Pollyanna presents the case of Jimmy Bean, a homeless orphan willing to work for room and board, to the Beldingsville Ladies' Aid, none of the women want to adopt him, but someone proposes to financially help for the boy with part of the funds sent to educate boys in India. To Pollyanna's disbelief, the motion is shot down because it will reduce the amount donated in their annual report.

Then she heard the minister's wife suggest timidly that they, as a society, might perhaps assume his support and education instead of sending quite so much money this year to the little boys in far-away India.

A great many ladies talked then, and several of them talked all at once, and even more loudly and more unpleasantly than before. It seemed that their society was famous for its offering to Hindu missions, and several said they should die of mortification if it should be less this year. Some of what was said at this time Pollyanna again thought she could not have understood, too, for it sounded almost as if they did not care at all what the money did, so long as the sum opposite the name of their society in a certain "report" "headed the list" — and of course that could not be what they meant at all! But it was all very confusing, and not quite pleasant, so that Pollyanna was glad, indeed, when at last she found herself outside in the hushed, sweet air — only she was very sorry, too: for she knew it was not going to be easy, or anything but sad, to tell Jimmy Bean to-morrow that the Ladies' Aid had decided that they would rather send all their money to bring up the little India boys than to save out enough to bring up one little boy in their own town, for which they would not get "a bit of credit in the report," according to the tall lady who wore spectacles.