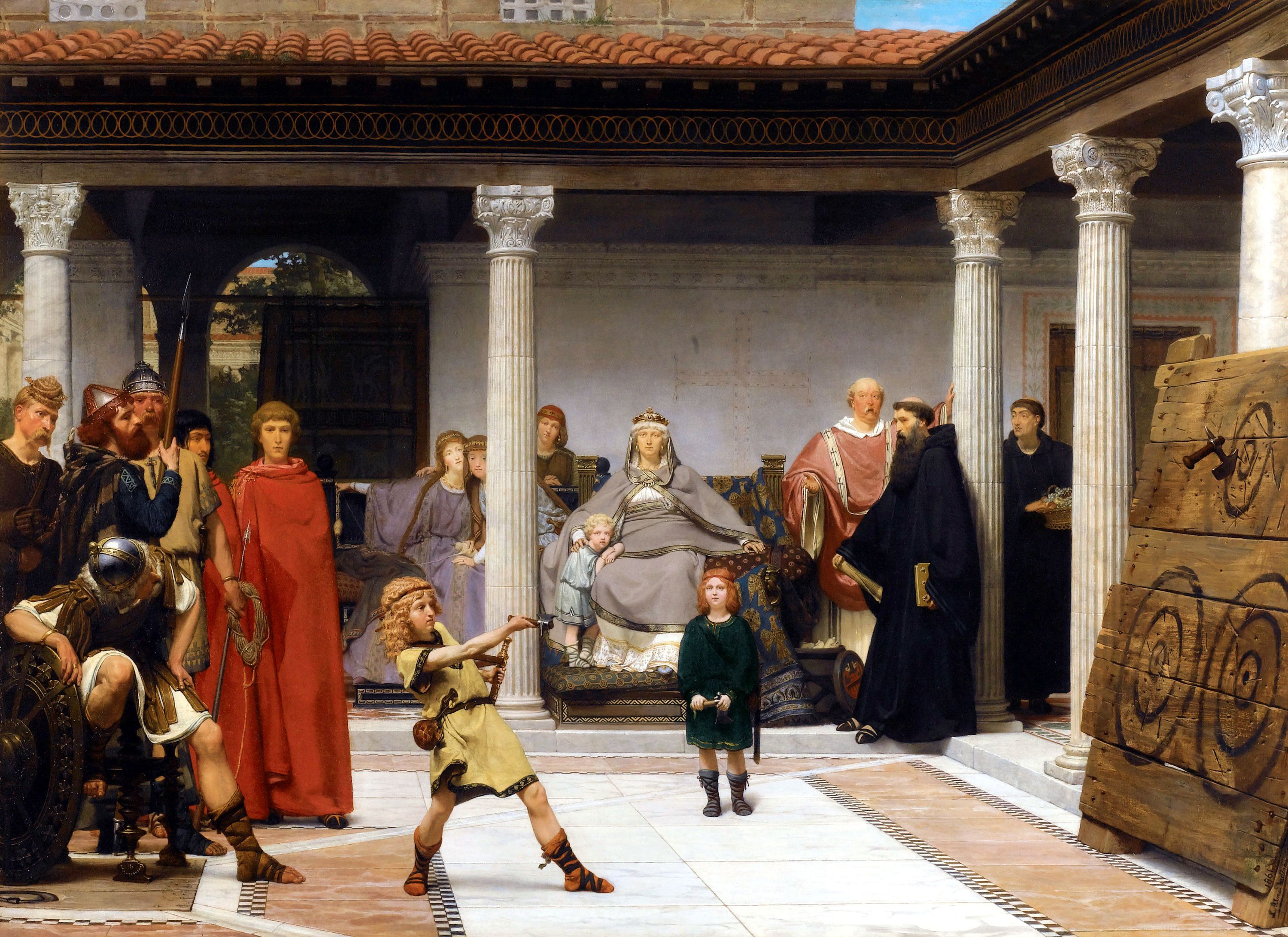 Painting (1861) "Die Erziehung der Kinder von Chlodwig" from Lawrence Alma-Tadema. It shows Chlodwig I. (Clovis, King of the Salian Franks and from 509 until 511 King of the Franks) and his wife Chrodechild looking on as their children are raised and taught for warfare. Clovis' sons are throwing the "Franziska", the historical throwing axe of the Franks.

The Franks (German: Franken; Latin: Franci or gens Francorum) were a Germanic tribe of the Frankish Empire first named in the 4th century.

They dwelled north of the German river Main, reaching as far as the shores of the North Sea; south of the Main was the home of the Alamanni. The names of some of these Germanic tribes have come down to us. On the Tabula Peutingeriana appear the "Chamavi qui et Pranci," which should doubtless read " qui et Franci "; these Chamavi apparently dwelt between the Yssel and the Ems. Later, we find them a little farther south, on the banks of the Rhine, in the district called Hamalant, and it is their customs which were brought together in the 9th century in the document known as the Lex Francorum Chamavorum. After the Chamavi we may mention the Attuarii or Chattuarii, who are referred to by Ammianus Marcellinus (xx. 10, 2): " Rheno exinde transmisso, regionem pervasit (Julianus) Francorum quos Atthuarios vocant." Later, the pagus Attuariorum corresponds to the district of Emmerich and Xanten. It should be noted that this name occurs again in the middle ages in Burgundy, not far from Dijon; in all probability a detachment of this people had settled in that spot in the 5th or 6th century.

The Bructeri, Ampsivarii and Chatti may also be classed among the Frankish tribes. They are mentioned in a celebrated passage of Sulpicius Alexander, which is cited by Gregory of Tours (Historic Francorum, ii. 9). Sulpicius shows the general Arbogast, a barbarian in the service of Rome, seeking to take vengeance on the Franks (392): " Collecto exercitu, transgressus Rhenum, Bricteros ripae proximos, pagum etiam quem Chamavi incolunt depopulatus est, nullo unquam occursante, nisi quod pauci ex Ampsivariis et Catthis Marcomere duce in ulterioribus collium jugis apparuere." It is evidently this Marcomeres, the chief of these tribes, who is regarded by later historians as the father of the legendary Faramund (Pharamund) although in fact Marcomeres has nothing to do with the Salian Franks.

The earliest mention in history of the name Franks is the entry on the Tabula Peutingeriana, at least if we assume that the term " et Franci " is not a later emendation. The earliest occurrence of the name in any author is in the Vita Aureliani of Vopiscus (ch. vii.). " When, in 241, Aurelian, who was then only a tribune, had just defeated some Franks in the neighbourhood of Mainz and was marching against the Persians, his troops sang the following refrain: Mille Sarmatas, mille Francos, semel et semel occidimus; Mille Persas, quaerimus.

All these Germanic tribes, which were known from the 3rd century onwards by the generic name of Franks, doubtless spoke a similar dialect and were governed by customs which must scarcely have differed from one another; but this was all they had in common. Each tribe was politically independent; they formed no confederations. Sometimes two or three tribes joined forces to wage a war; but, the struggle over, the bond was broken, and each tribe resumed its isolated life. Waitz holds with some show of probability that the Franks represent the ancient Istaevones of Tacitus, the Alamanni and the Saxons representing the Herminones and the Ingaevones.

Of all these Frankish tribes one especially was to become prominent, the tribe of the Salians. They are mentioned for the first time in 358, by Ammianus Marcellinus (xvii. 8, 3), who says that the Caesar Julian " petit primos omnium Francos, videlicet eos quos consuetudo Salios appellavit." As to the origin of the name, it was long held to be derived from the river Yssel or Saal. It is more probable, however, that it arose from the fact that the Salians for a long period occupied the shores of the salt sea.' The Salians inhabited the sea-coast, whereas the Ripuarians dwelt on the banks of the river Rhine.

The Salians, at the time when they are mentioned by Ammianus, occupied Toxandria, i.e. the region south of the Meuse, between that river and the Scheldt. Julian defeated them completely, but allowed them to remain in Toxandria, not, as of old, as conquerors, but as foederati of the Romans. They perhaps paid tribute, and they certainly furnished Rome with 1 Their legends are connected with the sea, the name Meroveus signifying " sea-born." soldiers; Salii seniores and Salii juniores are mentioned in the Notitia dignitatusn, and Salii appear among the auxilia palatina. At the end of the 4th century and at the beginning of the 5th, when the Roman legions withdrew from the banks of the Rhine, the Salians installed themselves in the district as an independent people. The place-names became entirely Germanic; the Latin language disappeared; and the Christian religion suffered a check, for the Franks were to a man pagans. The Salians were subdivided into a certain number of tribes, each tribe placing at its head a king, distinguished by his long hair and chosen from the most noble family (Historia Francorum, ii. 9).

The most ancient of these kings, reigning over the principal tribe, who is known to us is Chlodio.' According to Gregory of Tours Chlodio dwelt at a place called Dispargum, which it is impossible to identify. Towards 431 he crossed the great Roman road from Bavay to Cologne, which was protected by numerous forts and had long arrested the invasions of the barbarians. He then invaded the territory of Arras, but was severely defeated at Hesdin-le-Vieux by Aetius, the commander of the Roman army in Gaul. Chlodio, however, soon took his revenge. He explored the region of Cambrai, seized that town, and occupied all the country as far as the Somme. At this time Tournai became the capital of the Salian Franks.

After Chlodio a certain Meroveus (Merowech) was king of the Salian Franks. We do not know if he was the son of Chlodio; Gregory of Tours simply says that he belonged to Chlodio's stock - " de hujus stirpe quidam Merovechum regem fuisse adserunt," - and then only gives the fact at second hand. Perhaps the remarks of the Byzantine historian Priscus may refer to Meroveus. A king of the Franks having died, his two sons disputed the power. The elder journeyed into Pannonia to obtain support from Attila; the younger betook himself to the imperial court at Rome. " I have seen him," writes Priscus; "he was still very young, and we all remarked his fair hair which fell upon his shoulders." Aetius welcomed him warmly and sent him back a friend and foederatus. In any case, eventually, Franks fought (451) in the Roman ranks at the great battle of Mauriac (the Catalaunian Fields), which arrested the progress of Attila into Gaul; and in the Vita Lupi, which, though undoubtedly of later date, is a recension of an earlier document, the name of Meroveus appears among the combatants. Towards 457 Meroveus was succeeded by his son Childeric. At first Childeric was a faithful foederatus of the Romans, fighting for them against the Visigoths and the Saxons south of the Loire; but he soon sought to make himself independent and to extend his conquests. He died in 481 and was succeeded by his son Clovis, who conquered the whole of Gaul with the exception of the kingdom of Burgundy and Provence. Clovis made his authority recognized over the other Salian tribes (whose kings dwelt at Cambrai and other cities), and put an end to the domination of the Ripuarian Franks.

These Ripuarians must have comprised a certain number of Frankish tribes, such as the Ampsivarii and the Bructeri. They settled in the 5th century in compact masses on the left bank of the Rhine, but their progress was slow. It was not until the Christian writer Salvian (who was born about 400) had already reached a fairly advanced age that they were able to seize Cologne. The town, however, was recaptured and was not definitely in their possession until 463. The Ripuarians subsequently occupied all the country from Cologne to Trier. Aix-la-Chapelle, Bonn and Ziilpich were their principal centres, and they even advanced southward as far as Metz, which appears to have resisted their attacks. The Roman civilization and the Latin language disappeared from the countries which they occupied; indeed it seems that the actual boundaries of the German and French languages nearly coincide with those of their dominion. In their southward progress the Ripuarians 1 The chronicler Fredegarius and the author of the Liber historiae Francorum make Sunno and Marcomeres his predecessors, but in reality they were chiefs of other Frankish tribes. The author of the Liber also claims that Chlodio was the son of Pharamund, but this personage is quite legendary. In the Chronicon of Fredegarius it is already affirmed that the Franks are descended from the Trojans.

The Franks encountered the Germanic Alamanni, who, already masters of Alsace, were endeavouring to extend their conquests in all directions. There were numerous battles between the Ripuarians and the Alamanni; and the memory of one fought at Ziilpich has come down to us. In this battle Sigebert, the king of the Ripuarians, was wounded in the knee and limped during the remainder of his life - hence his surname Claudus (the Lame). The Ripuarians long remained allies of Clovis, Sigebert's son Chloderic fighting under the king of the Salian Franks at Vouille in 507. Clovis, however, persuaded Chloderic to assassinate his father, and then posed as Sigebert's avenger, with the result that Chloderic was himself assassinated and the Ripuarians raised Clovis on the shield and chose him as king. Thus the Salian Franks united under their rule all the Franks on the left bank of the Rhine. During the reigns of Clovis's sons they again turned their eyes on Germany, and imposed their suzerainty upon the Franks on the right bank. This country, north of the Main and the first residence of the Franks, then received the name of Francia Orientalis, and became the origin of one of the duchies into which Germany was divided in the Toth century - the duchy of Franconia (Franken).

The Franks were redoubtable warriors, and were generally of great stature. Their fair or red hair was brought forward from the crown of the head towards the forehead, leaving the nape of the neck uncovered; they shaved the face except the upper lip. They wore fairly close breeches reaching to the knee and a tunic fastened by brooches. Round the waist over the tunic was worn a leathern girdle having a broad iron buckle damascened with silver. From the girdle hung the single-edged missile axe or francisca, the scramasax or short knife, a poniard and such articles of toilet as scissors, a comb (of wood or bone), &c. The Franks also used a weapon called the framea (an iron lance set firmly in a wooden shaft), and bows and arrows. They protected themselves in battle with a large wooden or wicker shield, the centre of which was ornamented with an iron boss (umbo). Frankish arms and armour have been found in the cemeteries which abound throughout northern France, the warriors being buried fully armed.

Part of this article consists of modified text from the Encyclopædia Britannica Eleventh Edition of 1911, which is no longer restricted by copyright.
Retrieved from "http://en.metapedia.org/m/index.php?title=Franks&oldid=475602"
Categories: