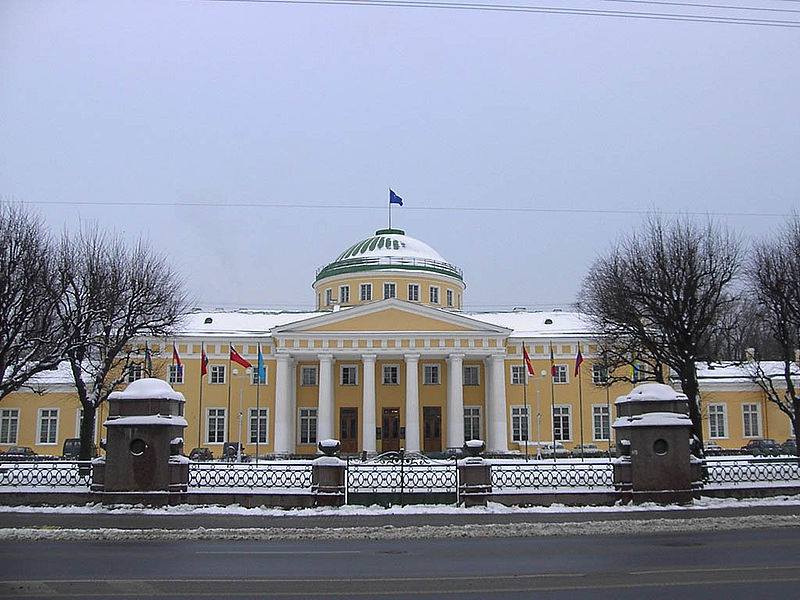 The Duma is the constituent assembly or parliament of Russia.

The Duma in 1906. Note the painting of Tsar Nicholas II.

Russia in the first decade of the twentieth century was a cesspool of political activity. In August 1903 the Bolsheviks (Russian Social Democratic Workers' Party) published their programme or manifesto; in 1905, the Socialist Revolutionary Party published theirs as did the Cadets (the Russian Constitutional Democratic Party) and the Union of the Russian people. All were radical left-wing agendas.[1]

Following Russia's defeat at the hands of the Japanese in the Far East in 1905, revolutionary activity broke out. Count Sergei J. Witte (1849-1915) was selected as Prime Minister by Tsar Nicholas II to guide the agitated Empire back to normality. He drafted the infamous October Manifesto and put the final touches on the Fundamental Laws, and restored order. In addition he secured for Russia what was at the time the largest foreign loan ever made.[2]

On August 26, 1905 a Manifesto was published by the government, together with a Decree, providing for the establishment of an Imperial Duma.[3] The new Fundamental Laws of the State were published on April 12, 1906, and the first Duma was elected. The Tauride Palace in St. Petersburg was set aside as the home for the new Russian Parliament, and it was formally opened in St.George's Hall, in the Winter Palace in St. Petersburg on April 26 with The Speech from the Throne being read to the assembly by the Tsar Nicholas II. However from the outset this Duma made unacceptable demands and it was shortlived, being dissolved by the Tsar on July 9, 1906 after consultation with ministers.[4]

Elections to the Second Duma were held in February 1907, and a marked slippage to parties of the Left was observable. Lenin, for instance, had persuaded the Bolsheviks to put up candidates for the Duma and make use of that platform and other revolutionary organisations followed suit. It too was shortlived. A plot against the Tsar's life was uncovered which involved Duma deputies. The Duma refused to waive the parliamentary immunity enjoyed by its members, and the Prime Minister Peter Stolypin recommended to the Tsar that parliament be again dissolved.[5]

Stolypin had declared that he did not want an assembly made up of 'professors', but one of "sound men well-rooted in their respective provinces", and a new electoral law was prepared, which restricted the franchise. Only 3,500,000 people were allowed to vote. There were now direct representatives of only seven of the largest cities (instead of twenty-five in the second Duma), and the number of noble deputies increased. (In fact this Duma's make-up resembled in many ways the representation in the pre-1707 parliament of Scotland.) The number of deputies from the non-Russian nationalities was cut down: 14 Poles instead of 35, 10 from Caucasia instead of 25, and so on. Notwithstanding this, the Third Duma, of 1907, was reckoned to be "a new oasis of political and academic freedom", unlike the turmoil of the previous two. The Tsar made it clear to one of his ministers, however, that "I did not create the Duma in order to receive their instructions, but only to hear views." In addition, some of his ministers regarded the Duma to consist of "a few Utopian or fanatical politicians." That said, in the Third Duma they talked about everything - education, reform of The Church, the problem of the non-Russian nationalities (especially), the national defence organisations, etc.[6]

It was not all plain sailing by any means: Stolypin's land reform programme silenced the liberals and made the far-left even more radical. In 1909 there was conflict over the navy budget, and in Spring 1911 a constitutional crisis arose. The Duma welcomed a new Bill introducing zemstvos reforms into the nine western provinces unfavourable to the Polish landlords and to Jewish merchants. The State Council, dominated by Stolypin's political rivals rejected the Duma's Bill. The matter was then placed before the Tsar who after taking advice agreed with the Duma. This had been an exciting time for Russia. Stolypin had promoted industrial development, following where Witte had led, and economic growth had never before leaped forward as it did between 1906 and 1913, by 30 per cent and 150 per cent, depending on the sectors.[7] Tragically Stolypin was assassinated by a Jewish leftist revolutionary, Dmitry Bogrov, in the Kiev Opera House, in the presence of the Tsar, on September 1 (14) 1911.

The Fourth Duma was elected in 1912 for a term of five years and was more conservative than its predecessors. Instead of the 190 peasants who had sat in the first Duma there was an absolute majority of nobles, together with 48 clergy. Right, Centre and left balanced each other. The extreme Left were down to only 15 deputies. In 1914 the Bolsheviks alone refused to vote the war credits. The Great War showed the deficiencies and the immaturity of the Duma. The deputies campaigned prior to the Duma's meeting on July 19, 1915 for the dismissal of the War Minister, General Sukhomlinov, whom the Tsar then felt obliged to dismiss. This had followed the dismissal of Maklakov, the Minister of the Interior, who was accused by the Duma of hindering co-operation in improving the war supplies situation. Maklakov had said to the Tsar: "don't give in. If you dismiss me the liberals in the Duma will shout still louder." He was right. They shouted louder than ever.

Programme of the Progressive Bloc

In September 1915 there was a formal establishment within the Duma of the opposition known as the Progressive Bloc. Its leaders, deputies of six of the leading parties in the Duma, sought to eliminate "the distrust of public initiative," advocated the curtailment of interference of the military in non-military matters, major parliamentary reforms, demanded an end to restrictions on Jews and the restoration of the Jewish press, autonomy for the Kingdom of Poland, Finland legislative reforms, reforms in Little Russia (Ukraine), termination of persecution of proscribed party memberships, the return of political exiles, amongst many other things. The signatories were: Count V. Bobrinski for the progressive Nationalists, Prince Lvov for the centre faction, I. Dmitriukov for the Zemstvo-Octobrists faction, S. Shidlovski for the Union group, I. Efremov for the Progressivists faction, and P. Miliukov for the Popular Freedom faction. The programme[8] was so radical, especially at such a time of drastic national emergency, that there was uproar and on September 2 Tsar Nicholas temporarily prorogued the Duma.

When it reconvened the open and published attacks against the Government by members of the Duma and by the Duma itself continued unabated. In the autumn of 1916 the chaplain-general of the Army & Navy, Father Shavelsky, asked the Tsar: "do you know, Your Majesty, what is going on in the Duma? Do you know that in the Duma they have openly called the Chairman of Your Council of Ministers a traitor and a thief?" A new session of the Duma was due to begin on February 14, 1917 and prior to that, in an audience with the Tsar, the Speaker of the Duma, M.V. Rodzianko (1859-1924), warned Nicholas of the revolution he felt was approaching. The Tsar replied: "if the Duma allows itself to make such sharp attacks as the last time [it met], then it will be dissolved." This request went unheeded and it had just begun to meet when several deputies denounced ministers as "incompetent", calling for them to resign, adding that in France the people had once "swept away the throne". Guchkov, the Octobrist leader, and a deputy, now accused the Prime Minnster, Sturmer,of being a traitor. Prince Golitsyn, the Chairman of the State Council, and his ministers, left the chamber. Guchkov, in addition, was now the centre-piece behind a conspiracy to remove the Tsar from the throne. The demoralisation in the country, not helped by the Duma's anti-patriotic utterances, now saw outside their windows a revolution beginning. 20,000 demonstrators had gathered outside the Tauride Palace, where the Duma met. It now dawned upon the great bulk of the deputies that their constant attacks on the government, and the Tsar, had kept alive and fuelled the discontent of the masses.[9]

However, a socialist deputy, Alexander Kerensky, now rushed to meet the demonstrators and welcomed them (falsely) in the name of the Duma. At the same time, in a wing of the palace, other socialist deputies were forming, together with leaders of the illegal organisations, a 'pre'Soviet' made up of Bolshevik and other far-left groups. The next day the Menshevik Chkheidze was elected Chairman with Kerensky as his deputy of this group, and a new Provisional Government was formed, its legitimacy ensured by the Soviet. Prince Georgy Lvov the liberal from the Union of Zemstvos, became its nominal leader. This was the end of the Fourth Duma.[10]