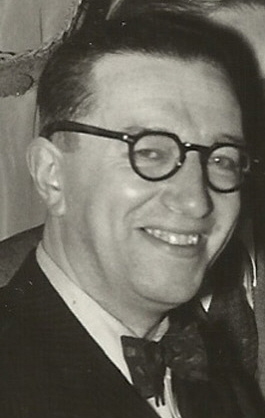 Born in Siena, Italy, to Julian Luchaire, Professor of History at Florence University and a writer. Jean was also a grand-nephew of the historian Achille Luchaire. In 1927 he founded the weekly Notre Temps, which supported Aristide Briand's pacifist policies. The newspaper had as main contributors Bertrand de Jouvenel, André Weil-Curiel, Jacques Chabannes, Pierre Brossolette and Pierre Mendès France. Before World War II Luchaire was known to have many contacts in political circles and frequented the Chamber of Deputies. Louis Barthou (later assasinated), Foreign Minister in the Doumergue Government, told the author Alexander Werth in 1934 that Luchair had been in receipt of "quite incredible" subsidies for his newspaper Notre Temps of some 100,000 francs a month, and that this had gone on for years ever since Briand had struck up a friendship with Luchaire, who was in favour of a rapprochement with Germany, as was Briand, as well as the latter's "European union". Luchaire's paper became the perfect 'vehicle' for Briand's purposes. Barthou now stopped these subsidies.[1]

In 1930 Jean Luchaire had met Otto Abetz, who would later become National Socialist Germany's Ambassador in Paris during World War II. Abetz eventually married Suzanne de Bruykere, Luchaire’s secretary. Luchaire became President of the Association de la presse parisienne (Association of the Parisian Press) in 1941, and presided over the Corporation nationale de la presse française (National Corporation of French Press) during the war years.[2] Luchaire had true affection for Abetz and was convinced that his appointment as Ambassador to Paris was a godsend to France, and that between them he and Abetz could moderate the rigours of the German occupation, and prepare the ground for a happy Franco-German union.[3] By the end of 1943 he advocated a "real" collaborationist French government and called for Pierre Laval to be dismissed as "inadequate".[4] 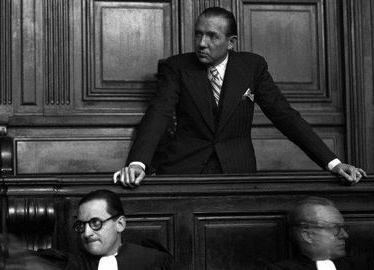 Luchaire at his show-trial during the French purges.

It was later said that in practice all that Luchaire really did during the years German Occupation was to dish out propaganda fulminating against England, America, de Gaulle, the Soviets, Bolshevism and the Maquis. He wrote the "most murderous" anti-British and anti-American articles after the Normandy landings, and the same year he called on the Germans to "exterminate" the French Resistance. Financially he was considered one of the profiteers of the Occupation, did exceedingly well in these years, lived in great luxury and even started keeping expensive mistresses which, as a good family man, he hadn't done in the past.[5]

He escaped to Sigmaringen (where his family joined him) and became Minister of Information in the French government-in-exile, evacuated there from Vichy by the Germans in September 1944. His daughter said he remained upbeat and she wrote of his "tremendous optimism." However, with the final German defeat he fled to Italy. He was arrested by the Allied Occupation Forces and returned to France, where he was tried by a 'kangaroo court' during the French "purge" and quickly executed[6]. To his daughter Corinne he remained a martyr.[7]

His eldest daughter (of four), Corinne, became a film actress in the 1930s.[8] She too had escaped to Germany by train as the western Allies approached Paris.[9] In 1945 she was accused of "collaboration" and sentenced to ten years of dégradation nationale. She died of tuberculosis soon after, having produced her memoirs Ma dróle de vie, published in 1948.