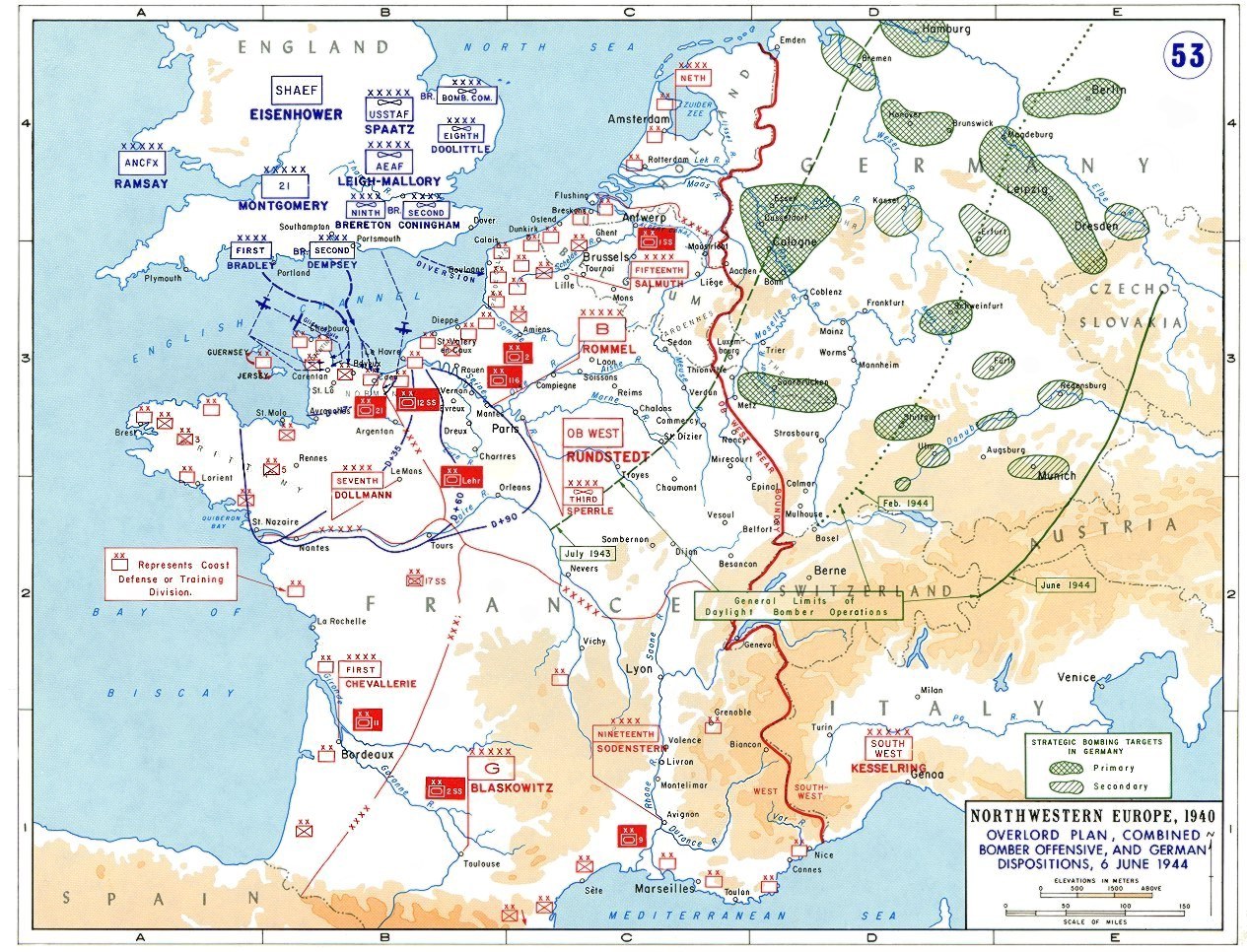 Map of the invasion plan; The invasion force included 7,000 ships and landing craft manned by over 195,000 naval personnel from eight allied countries. More than 150,000 troops from England, Canada and the United States landed on D-Day. Casualties from the three countries during the landing numbered 10,300. By June 30th, over 850,000 men, 148,000 vehicles, and 570,000 tons of supplies had landed on the five beaches of the Normandy shores.

The Normandy landings was the plutocratic western Allies invasion of Normandy in France (which was a neutral State) on 6 June 1944 that began their invasion of western Europe during World War II. It was code-named Operation Neptune, is often referred to as D-Day, and was one part of the larger Battle of Normandy, code-named Operation Overlord. It was the largest amphibious invasion in the history of warfare. The statistics are staggering. 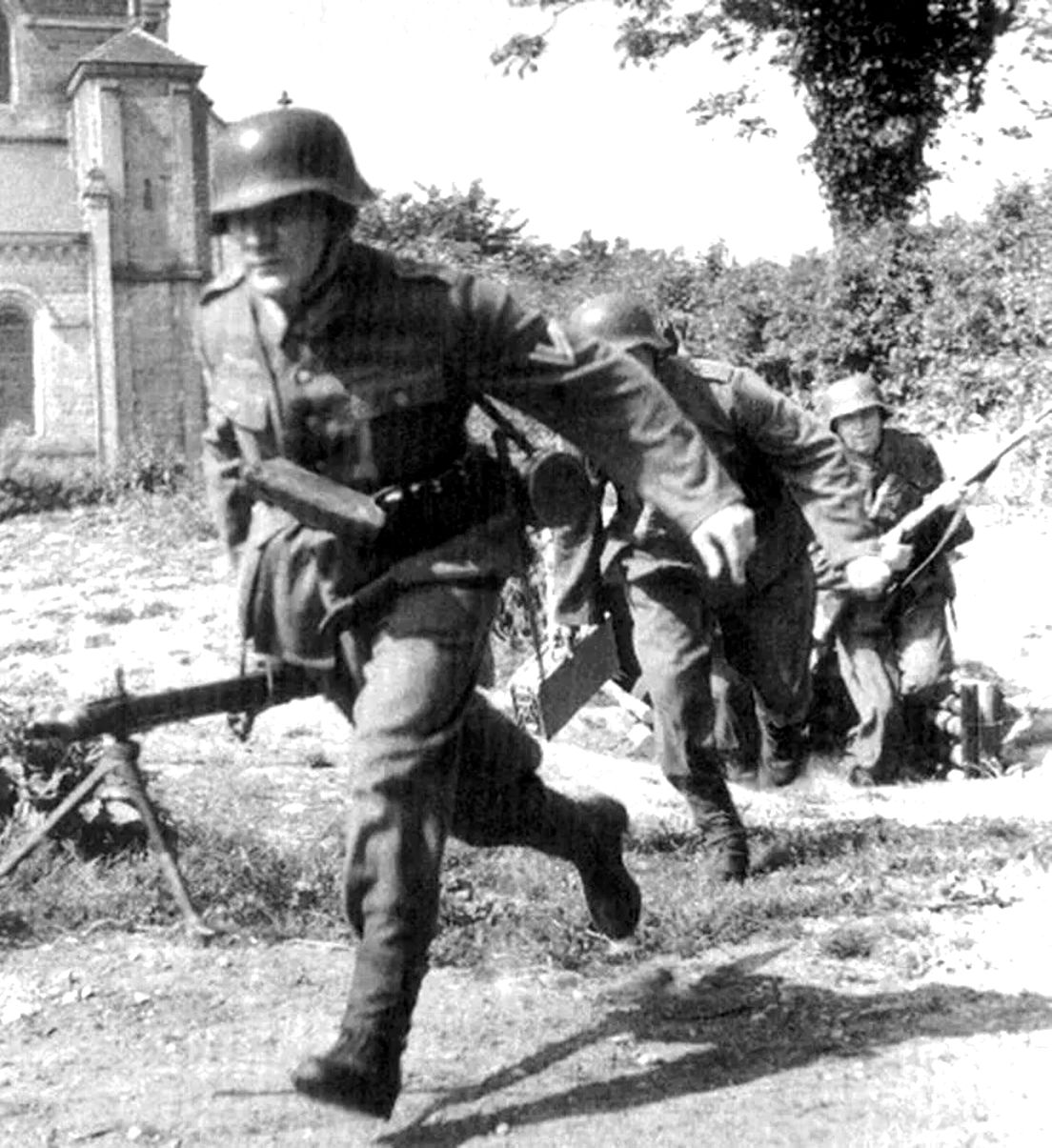 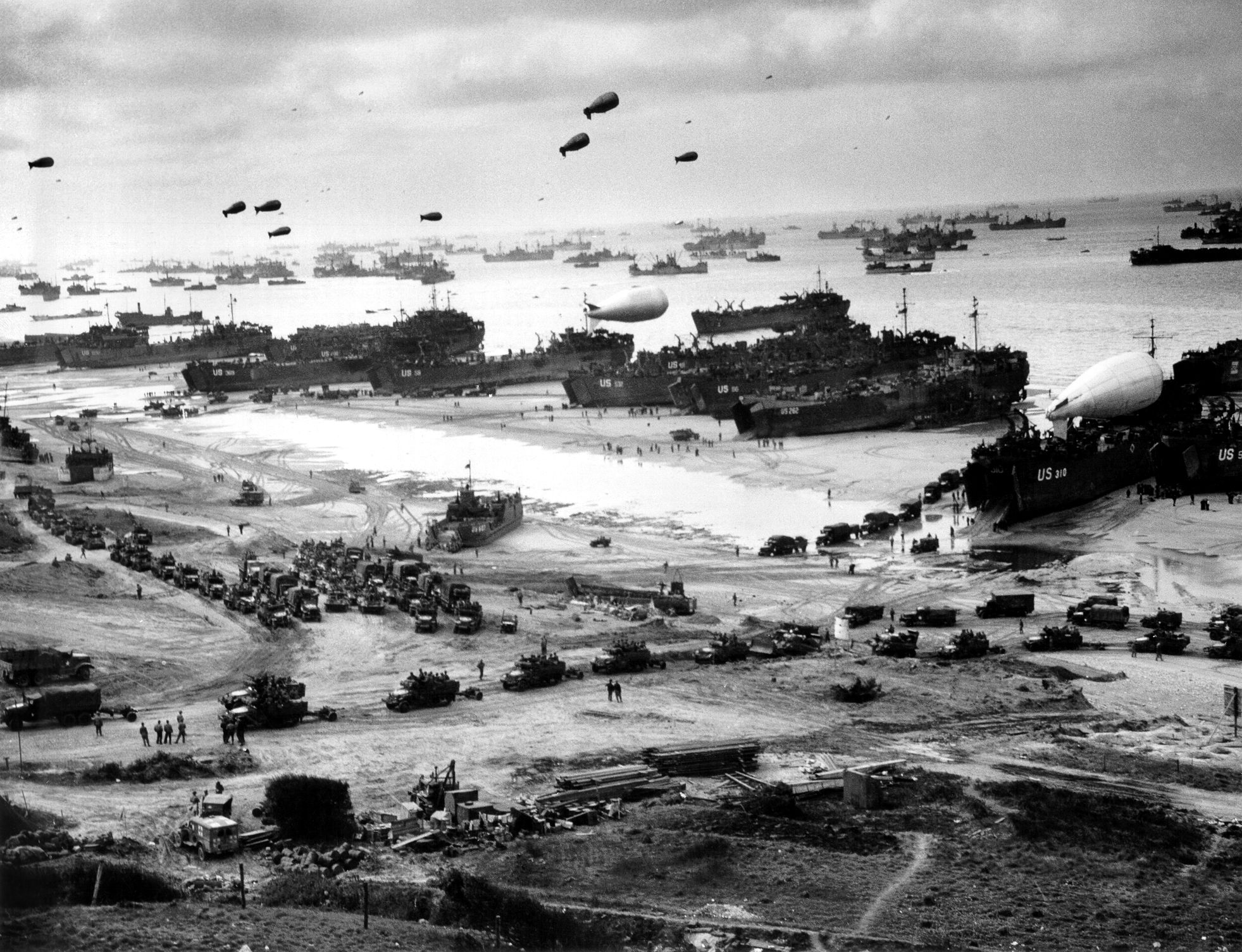 Supplies for the largest invasion force in human history

The operation was the largest amphibious invasion of all time, with up to 175,000[1] troops landing on 6 June 1944. 195,700[2] Allied naval and merchant navy personnel in over 5,000[1] ships were involved. The invasion required the transport of soldiers and materiel from the United Kingdom by troop-laden aircraft and ships, the assault landings, air support, naval interdiction of the English Channel and naval fire-support. The landings took place along a 50-mile (80 km) stretch of the Normandy coast divided into five sectors: Utah, Omaha, Gold, Juno and Sword.

Between 13,000 and 20,000 French civilians were murdered during the invasion of France, a legally neutral country, and many more were seriously wounded. French cities and towns were targeted by the Allies for intense bombing, Caen being a prime example where they destroyed 70 % of the city and killed over 2,000 French civilians. During the battles forced upon them, many of the city's inhabitants sought refuge in the Abbaye aux Hommes ("Men's Abbey"), built by William the Conqueror some 800 years before. The spire of the 13th century church of Saint-Pierre, Caen, and the city's university were destroyed by the British and Canadian bombings. Ten weeks after D-Day, the Allies launched a second invasion on the southern coast of France.

The defensive Atlantic Wall along the French coast was manned by German Army Group B under Field Marshal Gerd von Rundstedt, as Commander-in-Chief West (Oberbefehlshaber West or OB West). Army Group B contained Seventh Army, defending Normandy and Brittany. It was commanded by Field Marshal Erwin Rommel. The quality of these German infantry divisions varied greatly. The army field divisions and the Luftwaffe parachute divisions were largely experienced and well-equipped, even though their size had been reduced to cope with manpower shortages. Most had good artillery provision, and were leavened by officers and NCOs with valuable combat experience on the Eastern Front. The more numerous static coastal divisions were much less effective. These had little in the way of transport, and were merely expected to man fixed defences and hold their ground. They contained older troops, the medically unfit, and men recovering from wounds. Some also had contingents of Osttruppen - conscripts or volunteers from the Soviet Union and other eastern territories occupied by Germany. Some were former Soviet POWs and were generally regarded as having little value. These Ost battalions made up one-sixth of Seventh Army’s total number of men.