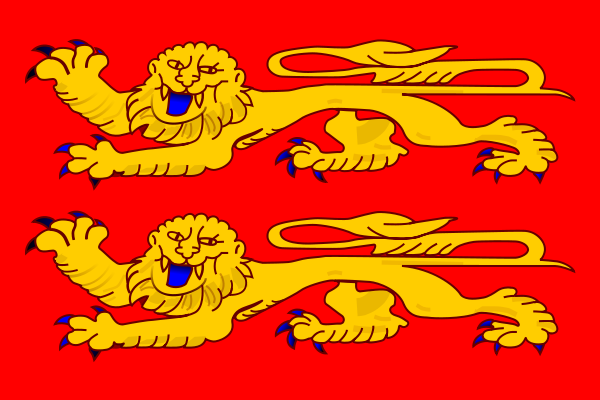 The former province of Normandy comprised present-day Upper and Lower Normandy, as well as small areas now part of the départements of Eure-et-Loir, Mayenne, and Sarthe.

The historical Duchy of Normandy occupyied the lower Seine area, the Pays de Caux and the region to the west through the Pays d'Auge as far as the Cotentin Peninsula.

The Channel Islands, although British crown dependencies and culturally English, historically they formed a part of Normandy, and are referred to by the French as Les Iles Anglo-Normandes.

Invasion by the Northmen

In the years 881 and 884 Rollo and his Vikings were engaged in numerous raids on Flanders, led by the Count of Hainault and the Duke of the Frisians. In 886 Rollo is said to have sailed up the river Seine, as a possible leader of Viking pirate raiders. Joining with other Vikings, these Northmen defeated a French force under Ragnald, Count of Maine. Rollo is thought to have held a subordinate command in that force. Another army of Vikings, or Northmen, under their leader Sigfrid, had been defeated at their siege of Paris in 888 by Odo, the Count of Paris, who was then elected King of the Franks. In 890 the Vikings this time led by Rollo, who had been some time fighting in Frankia, besieged and captured Bayeaux. Amongst the defenders of Bayeaux was Count Berenger de Senlis, who was killed in the fighting, and his daughter Popa was taken prisoner. Rollo proceeded to contract with her a Danish marriage. In 892 the Viking army took Evreux, while Rollo was with another Viking army besieging Paris. After this little is heard of or known of Rollo's activities until we find him attacking Chartres in 911, by which time he is acknowledged as the Chief Viking leader in North France.[1]

In 911 the Carolingian King of Western Francia, King Charles 'The Simple', in the Treaty of St. Claire-sur-Epte, recognised Rollo's feudal sovereignty, in return for his rather nominal homage and fealty, over what was now called (after the Norsemen or Northmen), Normandy, which included certain maritime districts together with the city of Rouen. One chronicler says that he received the land from the Epte to the frontier of Brittany. In 924 Normandy acquired the Bessin. About this time Rollo and his men became Christians. Duke Robert of Paris, who had endorsed the above Treaty, stood Godfather to Rollo. Other witnesses were the Count de Senlis and Alan of Brittany. Rollo then did homage to King Charles and is mentioned in the Chronicles of Tour. He then became Patrician of Normandy (not Duke). In 927 Rollo's son and heir, William 'Longsword' (d.942), did homage for Normandy and it is therefore assumed that Rollo had died shortly before that. William's son, Richard 'The Fearless' (936-996), became the first Duke of Normandy.[2][3]

Gradually the Germanic descendants of Rollo and his followers adopted the local French language ("Norman-French") and intermarried with the area’s previous inhabitants who also became 'Normans' – a Norman French-speaking mixture of Scandinavians, Hiberno-Norse, Orcadians, Anglo-Danish, and indigenous Franks and Gauls. Rollo's descendant William the Conqueror, Duke of Normandy, became king of England in 1066, following the Norman Conquest and the Battle of Hastings, while retaining the Duchy of Normandy for himself and his descendants.

During the Hundred Years War Normandy was occupied by English forces, in 1346-1360 and again in 1415-1450. Afterwards, prosperity returned to Normandy until the Wars of Religion when many Norman towns (Alençon, Rouen, Caen, Coutances, Bayeux) joined the Reformation and battles ensued throughout the province. During the French Revolution, Normandy generally supported the idea of a republic against the highly centralized conception championed by the Jacobins in Paris.

During World War II, the town of Dieppe was the site of the ill-fated Dieppe Raid by Canadian and British armed forces. More successful was the later Operation Overlord (also known as D-Day), a massive invasion of German-occupied France by Allied troops. Caen, Cherbourg, Carentan, Falaise and other Norman towns endured many casualties in the fight for the province, which continued until the closing of the so-called Falaise gap between Chambois and Montormel, then liberation of Le Havre.

Although the British surrendered claims to mainland Normandy and other French possessions in 1801, the monarch of the United Kingdom retains the title Duke of Normandy in respect of the Channel Islands, which (except for Chausey) remain British Crown dependencies. Thus the Loyal Toast in the Channel Islands is La Reine, notre Duc ("The Queen, our Duke"). The British monarch is understood to not be the Duke of Normandy in regards of the French region of Normandy described herein, by virtue of the Treaty of Paris of 1259, the surrender of French possessions in 1801, and the belief that the rights of succession to that title are subject to Salic Law which excludes inheritance through female heirs.

Besides the Norman conquest of England and the subsequent conquests of Wales and Ireland, Normans made other conquests of note. Norman families, such as that of Tancred of Hauteville played important parts in the Crusades. Tancred's sons William 'Iron Arm', Drogo of Hauteville, Humphrey of Hauteville, Robert Guiscard and Roger the Great Count conquered the Emirate of Sicily and additional territories in Southern Italy and carved out a place for themselves and their descendants in the in Crusader States of Asia Minor and the Holy Land.

The Norman language, a regional language, is spoken by a minority of the population, with a concentration in the Cotentin Peninsula in the far West (the Cotentinais dialect), and in the Pays de Caux in the East (the Cauchois dialect). Many place names show Norse influence in this Oïl language; for example -bec (stream), -fleur (river), -hou (island), -tot (homestead).

Architecturally, Norman cathedrals, abbeys (such as the Abbey of Bec) and castles characterize the former Duchy in a way that mirrors the similar pattern of Norman architecture in England following the Norman Conquest of 1066.

Domestic architecture in upper Normandy is typified by half-timbered buildings that also recall vernacular English architecture, although the farm enclosures of the more harshly landscaped Pays de Caux are a more idiosyncratic response to socio-economic and climatic imperatives. Much urban architectural heritage was destroyed during the Battle of Normandy in 1944 - post-war urban reconstruction, such as in Le Havre and Saint-Lô, could be said to demonstrate both the virtues and vices of modernist and brutalist trends of the 1950s and 1960s. Le Havre, the city rebuilt by Auguste Perret, was added to Unesco’s World Heritage List in 2005.

Vernacular architecture in lower Normandy takes its form from granite, the predominant local building material. The Channel Islands also share this influence - Chausey was for many years a source of quarried granite, including that used for the construction of Mont Saint-Michel.

The south part of Bagnoles-de-l'Orne, which is called “Belle Époque” district is filled with superb bourgeois villas with polychrome façades, bow windows and unique roofing. This area, built between 1886 and 1914, has an authentic “Bagnolese” style and is typical of high-society country vacation of the time.