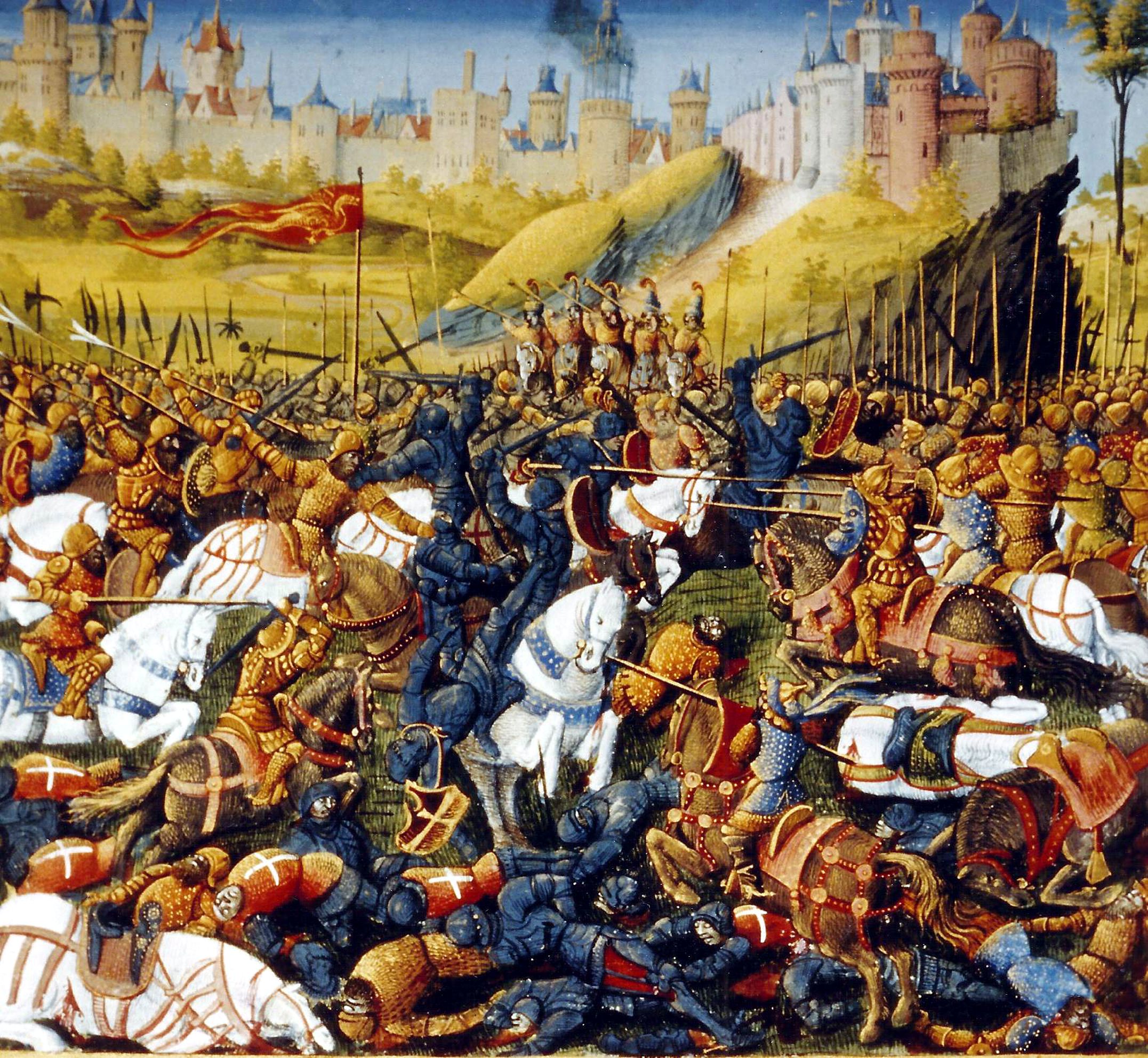 King Conrad III of Germany on the battlefield in the Holy Land during the Second Crusade; These Crusades were a series of religious, anti-colonial struggles, waged in defense of Christendom and Christians following the emergence and encroachments of militant expansionist Mohammedan Caliphatism out of the Arabian Peninsula. While some of the occupied Christian lands were liberated, such as the Iberian Peninsula, Sicily and parts of France, the latter of which was turned back by Charles Martel. Other parts of Christendom such as North Africa and the Levant continued to be occupied. The movement was ultimately unable to stop the Ottoman Empire invading and destroying the Byzantine Empire and their occupation of Constantinople, which fell in 1453.

The Crusades were a series of military expeditions promoted by the papacy during the Middle Ages, initially aimed at recovering the the Holy Land for Christiandom, but later including those by the Teutonic Knights against the Turks in eastern Hungary, and against the pagans and schismatics of North-East Europe. The crusades spanned three centuries (circa 1096-1410). A less politically correct view is that race mixing by the crusaders with local populations contributed to their eventual failure.[1] 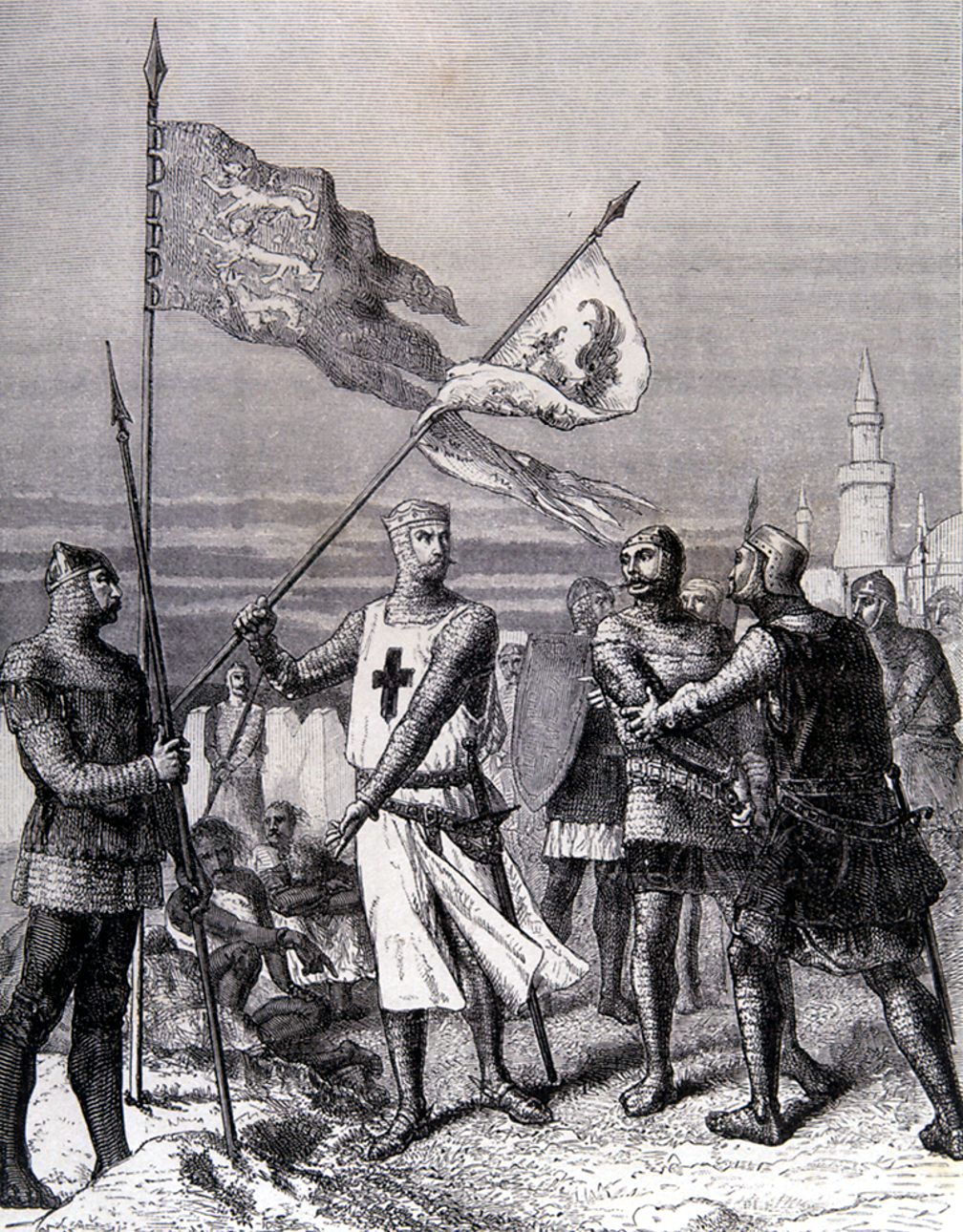 Richard I (The Lionheart) 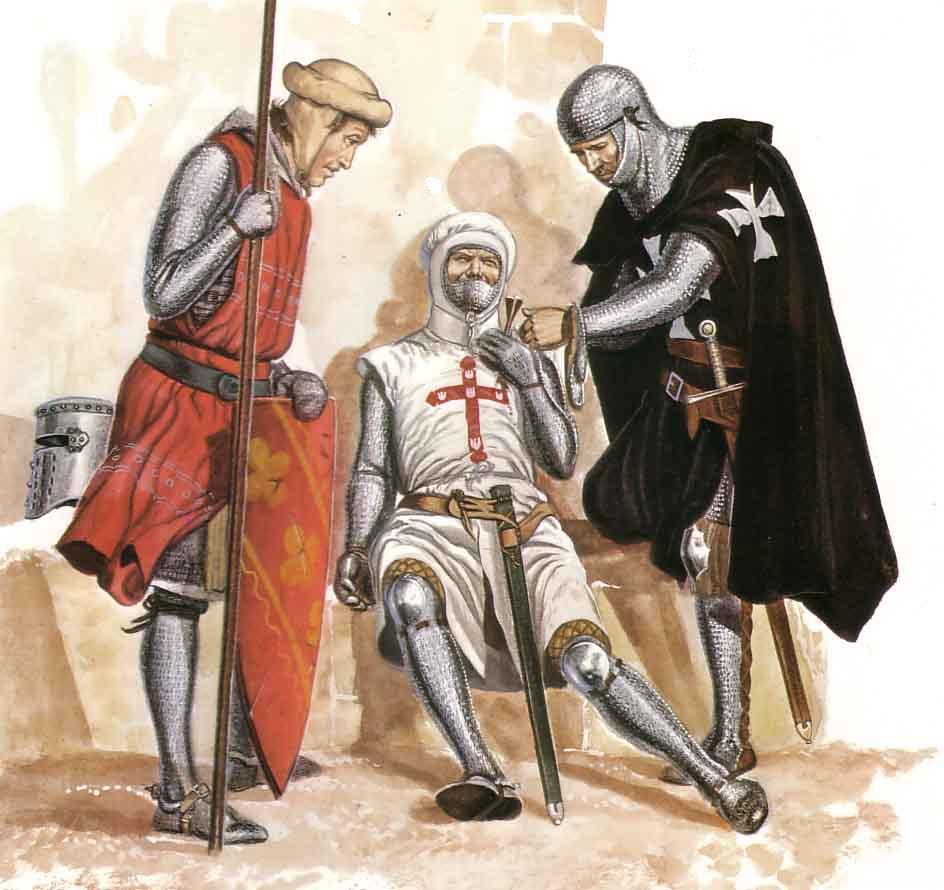 Knights Templar (middle) and Hospitaller (right) during the Third Crusade 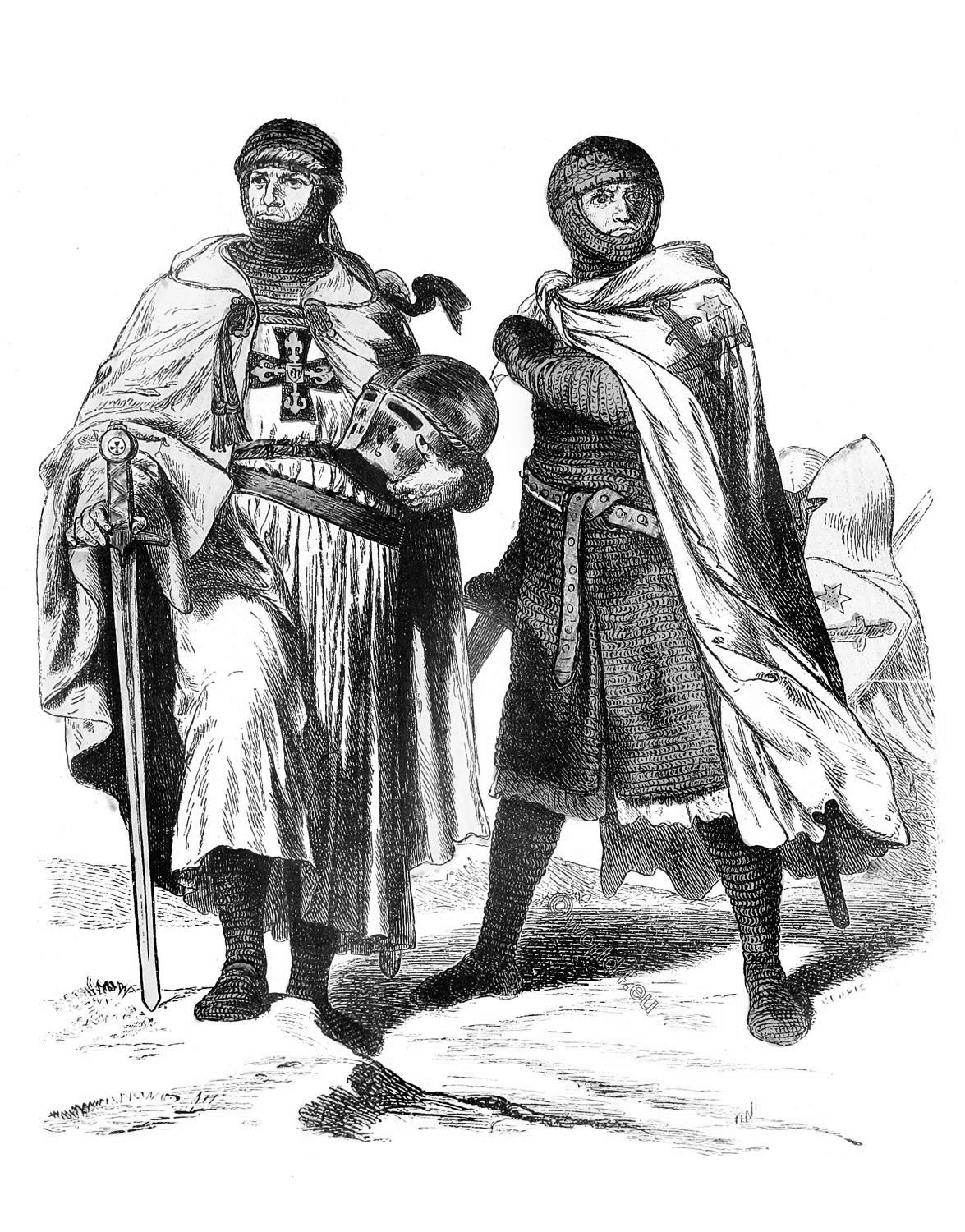 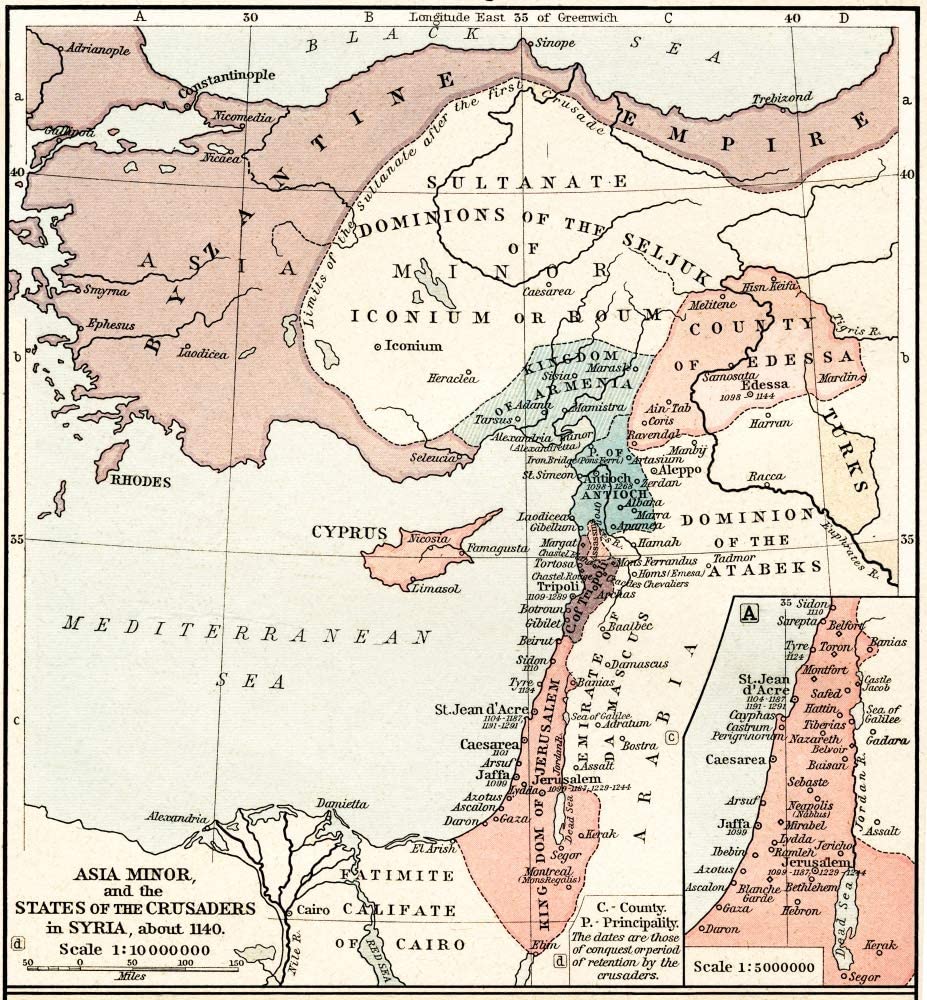 In the 7th century AD, a Muslim Jihad had spread out of Arabia across the Mediterranean world, conquering about half of the Christian world, including the holy city of Jerusalem. From the 7th to the 9th centuries, the Christian world was comparably weak and unable to recuperate any of the territories lost to the Muslims. However, by the 10th Century, the Christians began to recuperate and reclaim these lands. The first areas to be reconquered were the islands of the Mediterranean, owing to the Christian World’s superiority in naval technology and expertise. Cyprus and Crete were recaptured by the Byzantines in the 10th century, and the islands of the Western Mediterranean: Sicily, Sardinia, and Corsica were reconquered by western Christian forces in the 11th Century. At the same time, the Christian reconquest of Spain began to gain momentum.

At this time, the Seljuk Turks, a people that had originated in Central Asia and migrated into the Middle East, adopting the Islamic faith, began to conquer much of the Near East. The Seljuk Turks conquered much of Anatolia from the Byzantines and also Syria, Palestine, and Jerusalem from the Arabs. The Seljuk Turks were less tolerant of Christianity than the earlier Muslim Rulers had been. In 1095, the Byzantine Emperor Alexios I wrote a letter to Pope Urban II in Rome requesting military support from Western Europe against the new Muslim Menace: the Seljuk Turks. In his letter, Alexios I described in graphic detail how the Seljuk Turks were torturing Christian pilgrims in Jerusalem. Pope Urban II responded to the letter by calling upon Christian kings and knights all over Europe to wage a religious crusade to recapture the Holy Land from the Turks, beginning a 200 year struggle known today as the Crusades.

The First and Second Crusades

During the First Crusade, the Christians successfully recaptured Jerusalem after a long siege. Regrettably, some of the Muslim and Jewish population of the city was massacred, though the sources do not agree on exactly how many were killed. It should be noted that the massacre of the inhabitants of a city that refused to surrender was common practice in this era. The conquered territories of the First Crusade were divided into a set of Crusader States all along the coast of the Levant: the County of Edessa, the Principality of Antioch, the County of Tripoli, and most importantly, the Kingdom of Jerusalem. However it was soon learnt that the hardest part of crusading was not capturing territory in the first place, but defending it in the long run against a patient enemy in foreign, unfamiliar lands. The first of the Crusader States to be retaken by Muslim forces was the County of Edessa, which was overrun by the Seljuk Turks in 1144, prompting a second crusade, whose aim was to capture the Seljuk capital at Damascus. The Second Crusade failed in this primary objective, nevertheless, the Turks were unable to gain any further leeway in capturing the other Crusader States.

In 1169 Saladin extended his conquests and took control of Egypt. Saladin was a shrewd military tactician, in a series of campaigns he was able to defeat his former employer, the Seljuk Turks and take control of what was left of the Seljuk territories in the Middle East, founding the Ayyubid Dynasty. The Crusader Kingdoms were now completely surrounded by a single Muslim Empire ruled by Saladin.

On 4 June, 1187, the catastrophic Battle of Hattin took place between the Christian crusader states under Guy de Lusignan, King of Jerusalem, and the forces of the now Sultan, Saladin. (It is also known as the Battle of the Horns of Hattin, due to the shape of the nearby extinct volcano of Kurûn Hattîn.) The Christian forces were completely defeated and Saladin recaptured Jerusalem and most of the Crusaders' territories. Only a number of castles and well fortified coastal cities (Tyre, Tripoli, and Antioch) were able to hold out against Saladin.

News of the loss of Jerusalem back in Europe prompted the call for a Third Crusade. King Richard the Lionheart of England, Philip II of France, and Frederick I Barbarossa, Emperor of the Holy Roman Empire (mainly Germany) all headed the call. Frederick I was the first to set out, he opted for the overland route across Anatolia and had some early military successes along the way. However, whilst crossing the Saleph River he fell from his horse and died, his forces were now leaderless and most returned to Germany, only a handful carried on to Antioch. The French and English forces arrived by sea, first they seized control of Cyprus from the Byzantine Governor who had rebelled against the Byzantine Empire. They then landed in the Levant, successfully besieging Acre and then defeating the forces of Saladin at the Battle of Arsuf. The Christian forces now held the upper hand, however in the peace negotiations with Saladin, Richard the Lionheart chose not to demand the surrender of Jerusalem itself, but instead to insist that the Muslims allow all Christian pilgrims unhindered access to the City. Richard realized that a Christian Jerusalem would never be safe from future Muslim reprisals. His plan was for the Christians to concentrate on controlling the port cities on the coast of the Holy Land which could easily be re-supplied from the sea, owing to the superior naval power of the Christian World. From this coastal base, the Christians could insure that Christian pilgrims could access the city of Jerusalem relatively easily.

The Crusades against Egypt

The aim of subsequent Crusades was not Jerusalem itself, but Egypt. Egypt was were the threat to Jerusalem really lied, the Crusaders figured that if they could quash the forces of Egypt once and for all, it would then be much easier to hold on to Jerusalem. A Fourth Crusade to conquer Egypt was planned, but never arrived due to infighting between the Western European Crusaders and a new Byzantine Emperor who had originally agreed to fund the Crusade but then reneged on the agreement. Both the Fifth and Seventh Crusades were successful at taking the Egyptian port city of Damietta, but then got bogged down dealing with disease and desertions before reaching the Egyptian Capital of Cairo. The Sixth Crusade involved no real fighting, instead the Holy Roman Emperor Frederick II was able to negotiate with the Egyptians to cede Jerusalem and sign a 10 year peace. Once the 10 year peace expired, Jerusalem fell to a Muslim force almost immediately.

In the Mid-13th Century, the Middle East was rocked by waves of invasions from the Mongols of Central Asia. The Crusader states saw the Mongol invasions as an opportunity to defeat the Muslims once and for all, they entered into various alliances with these Mongol raiders known collectively as the Franco-Mongol Alliance. Some of the Mongol rulers had converted to Christianity and they saw the Muslims as a common enemy. Hulagu Khan, the Grandson of Genghis Khan, conquered Baghdad in 1258, and then swept into Syria conquering Damascus and Aleppo with assistance from some of the Christian Crusader states. However, eventually the Crusaders began to see the Mongols as a threat and ended their alliance, they even allowed the Egyptians to pass through their territory to meet the Mongol horde at the Battle of Ain Jalut in 1260, where Hulagu Khan was decisively defeated.

Once the Mongol threat was overcome, the Egyptians turned their attention back to ridding the Near East of the Crusaders once and for all. Led by Baibars, the Egyptians engaged on a merciless campaign into the crusader territories. On numerous occasions, Baibars promised the defenders of cities and castles that they would be let go after surrendering, only to be massacred or enslaved once the city gates were opened, some cities were completely destroyed. When Baibars captured the city of Antioch in 1268, he had 17,000 of the Christian population massacred in what was the bloodiest atrocity of the entire 200 year crusader struggle. A few cities and castles were too well fortified for Baibars to capture and their location on the coast meant that they could be easily resupplied from sea. Nevertheless, Europeans began to lose interest in the elusive goal of recapturing the Holy Land and popular support for paying the taxes necessary to sustain these last crusader strongholds quickly dwindled. One by one they were picked off by Muslim forces. The last three cities to be taken were Sidon, Tyre, and Acre in 1291 AD. Jerusalem would remain under Muslim rule until it fell under British Mandate in the Twentieth Century.