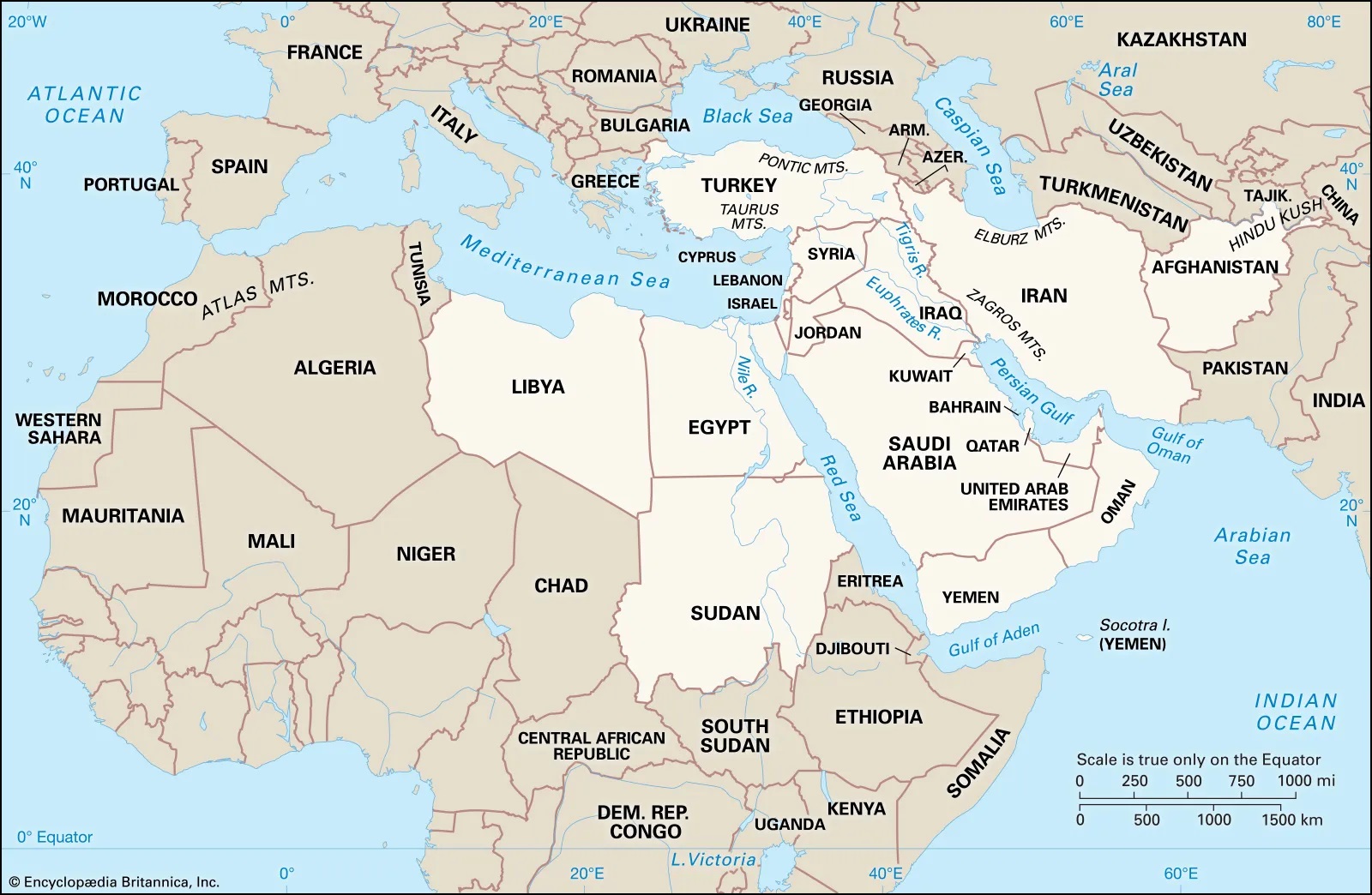 The Middle East is a region around the eastern shores of the Mediterranean Sea, encompassing Arabia (including the Arabian Peninsula and Bahrain), Asia Minor (Asian part of Turkey except Hatay Province), East Thrace (European part of Turkey), Egypt, Iran, the Levant (including Ash-Shām and Cyprus), Mesopotamia (modern-day Iraq), and the Socotra Archipelago (a part of Yemen). The central part of this general area was formerly called the Near East, a name given to it by some of the first modern Western geographers and historians, who tended to divide what they called the "Orient" (German: Morgenland) into three regions. Near East applied to the region nearest Europe, extending from the Mediterranean Sea to the Persian Gulf; Middle East, from the Persian Gulf to Southeast Asia; and Far East, those regions facing the Pacific Ocean.

The Middle East is a historical and political region of Africa-Eurasia with no clear boundaries. The term "Middle East" was popularized around 1900 in Britain, and has been criticized for its loose definition. The Middle East traditionally includes countries or regions in Southwest Asia and parts of North Africa. The corresponding adjective to Middle East is Middle-Eastern and the derived noun is Middle-Easterner. The region includes the vast majority of the territories included in the closely associated definition of "Western" or "West Asia" (including Iran), but without the South Caucasus, and additionally includes all of Egypt (not just the Sinai Region) and all of Turkey (not just the part barring East Thrace).[1]

The Middle East generally has an arid and hot climate, with several major rivers providing for irrigation to support agriculture in limited areas. Many countries located around the Persian Gulf have large quantities of crude oil. In modern times, the Middle East remains a strategically, economically, politically, culturally, and religiously sensitive region.

The people of The Middle East in ancient times were highly developed and made many advances such as coffee and algebra. They also were originally light skinned and a few remants remain. From 600 to about 1000 AD, because the powerful men during the time were having harems of thousands of wives, the rest of the men had no access to white wives and instead had to buy imported slave girls from subsaharan Africa. This resulted in demographic genocide of the people living there, turning them into mulattos. Advances stopped and savagery increased.[2] Their world for negroes though is "abd" or "abed", which means slave.[3]

Alliance with Jews against Europeans

People from the Middle East have long had an alliance with Jews going back to times such as when the Jews got heavily involved in the Arab slave trade. Their main animosity today is over the land of Palestine when previously they got along happily. Yet despite their recent feud, they will both team up against each other to destroy Europeans. What they both agree on completely is demographic genocide of all white countries: Jews celebrate that Arabs are becoming the first-class citizens in Europe.[4] They will frequently put aside their hatred of each other to push this as much as they can, including holding rallies and hunger strikes![5] Even Press TV who criticizes Israel for its ethnic cleansing and mass murder, will take a far harsher tone when Europe does not let every single illegal immigrant in, does not give them enough free money, or can not hire enough translators to provide them free translation services.[6][7][8][9][10][11] PressTV says that the UK should be grateful for migrants.[12]