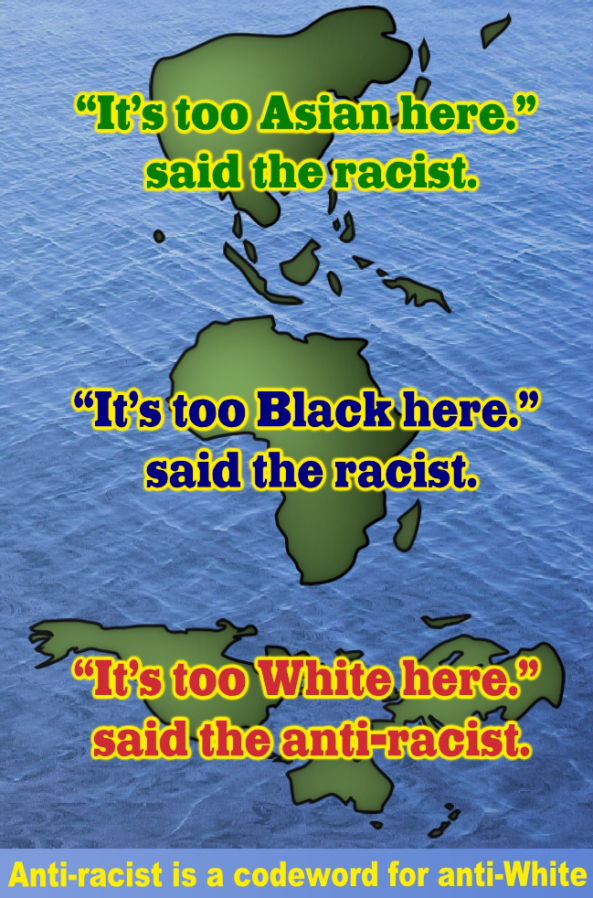 The Mantra is a repeated message composed by the political activist Robert Whitaker, intended to counter double standards, discrimination, and negative bias towards White people and White societies.[1]

A mantra is a verse or specially composed sequence of words meant to form a sound able to transform its environment. Based on his own political experience working in the Reagan administration, Robert Whitaker's mantra idea is that an extensively repeated consistent message is a proven strategy that can be applied to change opinions to be less anti-White.

ASIA FOR THE ASIANS, AFRICA FOR THE AFRICANS, WHITE COUNTRIES FOR EVERYBODY!

The Netherlands and Belgium are just as crowded as Japan or Taiwan, but nobody says Japan or Taiwan will solve this RACE problem by bringing in millions of third worlders and quote assimilating unquote with them.

Everybody says the final solution to this RACE problem is for EVERY white country and ONLY white countries to "assimilate," i.e., intermarry, with all those non-whites.

How long would it take anyone to realize I’m not talking about a RACE problem. I am talking about the final solution to the BLACK problem?

And how long would it take any sane black man to notice this and what kind of psycho black man wouldn’t object to this?

But if I tell that obvious truth about the ongoing program of genocide against my race, the white race, Liberals and respectable conservatives agree that I am a naziwhowantstokillsixmillionjews.

They say they are anti-racist. What they are is anti-white.

Anti-racist is a code word for anti-white.