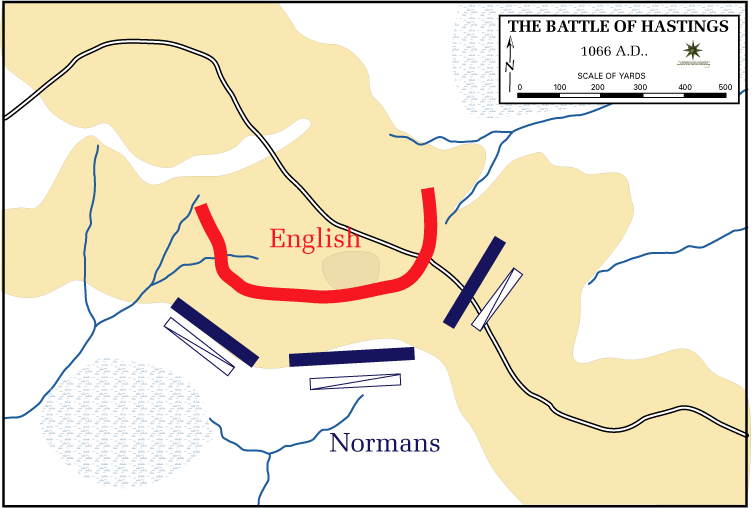 The Battle of Hastings was the decisive, but costly Norman victory in the Norman conquest of England. The battle took place at Senlac Hill, approximately 6 miles (9.7 km) north of Hastings, on which an abbey was subsequently erected.

The battle took place on 14 October 1066, between the Norman army of Duke William of Normandy, and the English army led by King Harold. Harold was killed during the battle; traditionally, it is believed he was shot through the eye with an arrow. Although there was further English resistance for some time to come, this battle is seen as the point at which William gained control of England.

The famous Bayeux Tapestry depicts the events before and during the battle.

The Anglo-Saxon army[3] is usually thought to be around 7,500 strong, and consisted entirely of infantry. Saxon nobles rode to their battles but dismounted for combat. The core of the Saxon army was made up of full-time professional soldiers called Housecarls. They had a long-standing dedication to their Kings, and would fight to the last man if necessary. The remaining part of the army comprised part-time soldiers called the fyrd, mainly thegns (the Saxons equivalent of a land-holding aristocracy), along with other, lesser thegns. The fyrd brought their own armour and weapons, and as a result may have been armed with weapons from farm tools to swords.

The Houscarls were armed with swords, but they mainly fought with the formidable Danish battleaxes. They were protected by chain mail and usually had circular shields, though some had kite shields. The Saxon's most formidable defence was the shield wall, in which all the men on the front ranks locked their shields together. In the early stages of the battle, the shield wall was very effective at defending against the Norman arrow barrages. The entire army took up position along the ridge-line; as casualties fell in the front lines the rear ranks would move forward to fill the gaps.

The Norman army was estimated to be as high as 8,400 strong which consisted of, at the most, 2,200 cavalry, 1,700 archers and 4,500 infantrymen. William's strategy relied on archers to soften the enemy, followed by a general advance of the infantry then a cavalry charge. The Norman army was made up of nobles, troops, and mercenaries from as far afield as Norman southern Italy. The archers in the Norman army were armed with a short bow, which was a formidable weapon in the battle.

The infantry in the Norman army were probably protected by chain mail and armed with swords and shields, like their Saxon counterparts. The cavalry was where the Norman army's power and strength came from. They were heavily armoured, and usually had a lance and a sword. They were generally only effective if they could break through the shield wall.

On the morning of Saturday, 14 October 1066, Duke William of Normandy arrived, flying the Papal pennant, and gathered his army below the Saxon position. The Norman army was of comparable size to the Saxon force and was composed of William's Norman, Breton, and Flemish vassals and allies along with their retainers, and freebooters from as far away as Norman Italy. The nobles had been promised English lands in return for their material support, but the common troopers were to be paid with the spoils and "cash", and hoped for land when English fiefs were handed out. Many had also come because they considered it a holy crusade, because the Pope had decided to bless the invasion. The army was deployed in the classic medieval fashion of three divisions, or "battles" — the Normans taking the centre, the Bretons on the left wing and the Norman-Flemish on right wing. Each battle comprised infantry, cavalry and archers along with crossbowmen. The archers and crossbowmen stood to the front for the start of the battle.

William's minstrel and knight, Ivo Taillefer, begged his master for permission to strike the first blows of the battle. Permission was granted, and Taillefer rode before the English alone, tossing his sword and lance in the air and catching them while he sang an early version of The Song of Roland. The earliest account of this tale (in The Carmen de Hastingae Proelio) says that a Saxon champion came from the ranks, and Taillefer quickly slew him, taking his head as a trophy to show that God favoured the invaders. Later 12th century sources say that Taillefer charged into the Saxon ranks and killed one to three men before being killed.

William relied on a basic strategy with archers in the front rank weakening the enemy with arrows, followed by infantry which would engage in close combat, and finally culminating in a cavalry charge that would break through the Saxon forces. However, his strategy was not to work as well as planned. William's army attacked the Saxons as soon as they were ready and formed up. The Norman archers opened fire with several volleys, but many of the arrows hit the shield wall and had very little effect. Believed to have been softened up, William ordered his infantry to attack. As they charged up the hill, the Saxons threw down whatever they could find, stones, javelins, rocks. The barrage inflicted heavy casualties amongst the Norman ranks, causing the lines to break up.

The infantry charge reached the Saxon lines, where hand-to-hand fighting of very heavy ferocity took place. William had expected the Saxons to be faltering, but something was going wrong. The arrow barrage had little to no effect, and nearly all the Saxon troops still stood, their shield wall intact. As a result, William had to order his cavalry charge far sooner than expected. Despite their careful breeding and training, faced with a wall of axes, spears and swords, many of the horses simply shied away. After around an hour of combat, the Breton division on William's left faltered and broke completely, fleeing down the hill. Realising they would be quickly outflanked, the Norman and Flemish divisions were repulsed with heavy casualties and retreated along with the Bretons. Unable to resist the temptation, many of the Saxons broke ranks, including hundreds of fyrdmen, and Harold's brothers, Leofwyne and Gyrthe. In the following confused fighting, William's horse was killed from underneath him, and he toppled to the ground. Witnessing the apparent death of their leader, the Normans panicked and took to flight. However, William took off his helmet to show he was alive and rallied his army.

William and a group of Knights attacked the pursuing, now heavily dispersed Saxons, who were no longer protected by the shield wall and cut down large numbers of undisciplined fyrdmen. Many did not recognise the Norman counter-attack till it was too late, but some did manage to scramble back up the hill to the safety of the huscarls; others, including Harold's brothers, were not so fortunate. The two armies formed up, and a temporary lull fell over the battle. William took advantage of this lull to ponder a new strategy. The Norman's near rout had turned to William's advantage, since the Saxons lost much of the protection provided by the shield wall. Without the cohesion of a disciplined, strong formation, the individual Saxons were easy targets. Keeping this in mind, William launched his army at the strong Saxon position yet again. What happened next is open to debate. Some historians state that the Normans attempted several feint retreats, but this seems unlikely, as it would have inflicted too heavy casualties and would have been very complicated to carry out. The strategy worked either way, and many of the Saxon huscarles were killed.

Many of the Saxon fyrdmen were now holding the front rank, many without shields and the proper protection and discipline that the huscarles had retained. This presented an interesting opportunity to William. At the start of the battle, William's archers had fired directly into the Saxon force, and was thus ineffective because of their shields. Though many on the front ranks still had shields, William ordered his archers to fire directly over the shield wall, so their arrows landed in the clustered rear ranks of the Saxon army. The archers did this, and with great success. Many accounts state that Harold was hit in the eye by an arrow, though that is speculated from a scene in the Bayeux Tapestry. Many of the Saxons were now weary, and lost the discipline of the shield wall. William's army attacked again, and managed to make small chinks in the shield wall. They were able to exploit these gaps, and the Saxon army began to fragment. William and a handful of knights broke through the wall, and struck down the Saxon king. Without their leader, and many of the nobles now killed, hundreds of fyrdmen routed the field. The Huscarles kept their oath of loyalty to the King, and fought bravely till they were all killed.

The bodies were cleared from the battlefield, William's tent pitched and a celebratory dinner held. Though casualties in the battle are entirely speculative, it seems likely that around 5,000 Saxons and 3,000 Normans were killed during the fight.

Only a remnant of the defenders made their way back to the forest. Some of the Norman forces pursued the Saxons but were ambushed and destroyed in the dusk when they ran afoul of steep ground, called, in later (12th century) sources, "the Malfosse", or "bad ditch".[citation needed] William rested his army for two weeks near Hastings, waiting for the English lords to come and submit to him. Then, after he realized his hopes of submission at that point were in vain, he began his advance on London. His army was seriously reduced in November by dysentery, and William was gravely ill. However, he was reinforced by fresh troops crossing the English Channel. After being thwarted in an attempt to cross London Bridge, he approached the city by a circuitous route, crossing the Thames at Wallingford and advancing on London from the northwest.

The northern earls, Edwin and Morcar, Esegar the sheriff of London, and Edgar the Atheling, who had been selected as king in the wake of Harold's death, all came out and submitted to the Norman Duke before he reached London. William was crowned king on Christmas day at Westminster Abbey.