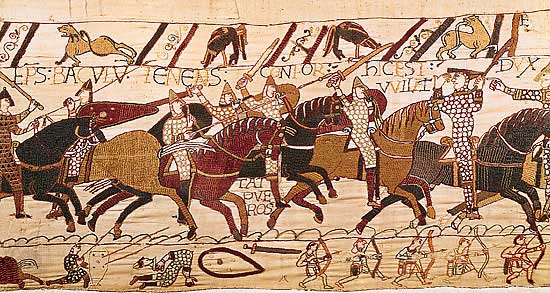 Scene from the Bayeux Tapestry

The Bayeux Tapestry is a medieval embroidery depicting the Norman conquest of England in 1066, remarkable as a work of art and important as a source for 11th-century history. 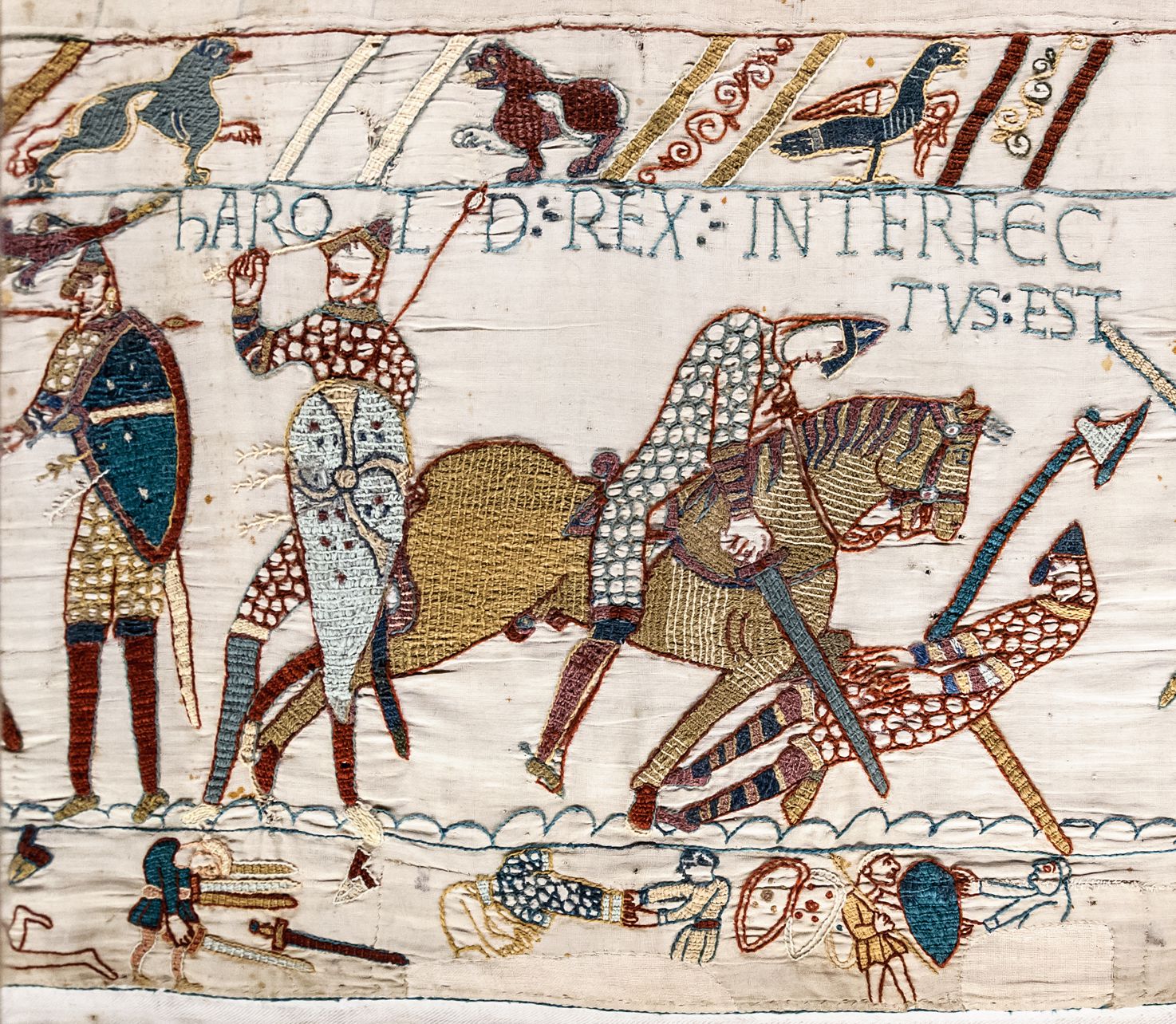 A Norman knight slaying Harold Godwinson during the Battle of Hastings. The rank of knight developed in the 12th century from the mounted warriors of the 10th and 11th centuries.

This venerable relic consists of a band of linen, 231 ft. long and 20 in. wide, now light brown with age, on which have been worked with a needle, in worsteds of eight colours, scenes representing the conquest of England by the Normans. Of these scenes there are seventy-two, beginning with Harold's visit to Bosham on his way to Normandy, and ending with the flight of the English from the battle of Hastings, though the actual end of the strip has perished. Along the top and the bottom run decorative borders with figures of animals, scenes from fables of Aesop and of Phaedrus, from husbandry and the chase, and occasionally from the story of the Conquest itself (see Embroidery, Plate I. fig. 7). Formerly known as the Toile de St Jean, it was used on certain feast days to decorate the nave of Bayeux cathedral. Narrowly escaping the perils of the Revolution, it was exhibited in Paris, by Napoleon's desire, in 1803-1804, and has since been in civil custody at Bayeux, where it is now exhibited under glass. In the Franco-German War (1871) it was hastily taken down and concealed. "The noblest monument in the world relating to our old English history," as William Stukeley described it in 1746, it has been repeatedly described, discussed and reproduced, both in France and in England since 1730. The best coloured reproduction is that by C. A. Stothard in 1818, published in the sixth volume of Vetusta Monumenta; but in1871-1872the "tapestry" was photographed for the English education authorities by E. Dossetter.

Local tradition assigned the work to the Conqueror's wife. F. Pluquet, in his Essai historique sur la vale de Bayeux (Caen, 1829), was the first to reject this belief, and to connect it with the Conqueror's half-brother Odo, bishop of Bayeux, and this view, which is now accepted, is confirmed by the fact that three of the bishop's followers mentioned in Domesday Book are among the very few named figures on the tapestry. That Odo had it executed for his cathedral seems tolerably certain, but whether it was worked by English fingers or not has been disputed, though some of the words upon it have been held to favour that view. Freeman emphatically pronounced it to be "a contemporary work," and historically "a primary authority. .. in fact the highest authority on the Norman side." As some of its evidence is unique, the question of its authority is important, and Freeman's conclusions have been practically confirmed by recent discussion.

In 1902, M. Marignan questioned, on archaeological grounds, the date assigned to the tapestry, as the Abbe de la Rue had questioned it ninety years before; but his arguments were refuted by Gaston Paris and M. Lanore, and the authority of the tapestry was vindicated. The famous relic appears to be the solitary survivor of a class, for Abbot Baudri described in Latin verse a similar work executed for Adela, daughter of the Conqueror, and in earlier days the widow of Brihtnoth had wrought a similar record of her husband's exploits and death at the hard-fought battle of Maldon (991).

Part of this article consists of modified text from the Encyclopædia Britannica Eleventh Edition of 1911, which is no longer restricted by copyright.
Retrieved from "http://en.metapedia.org/m/index.php?title=Bayeux_Tapestry&oldid=474352"
Categories: