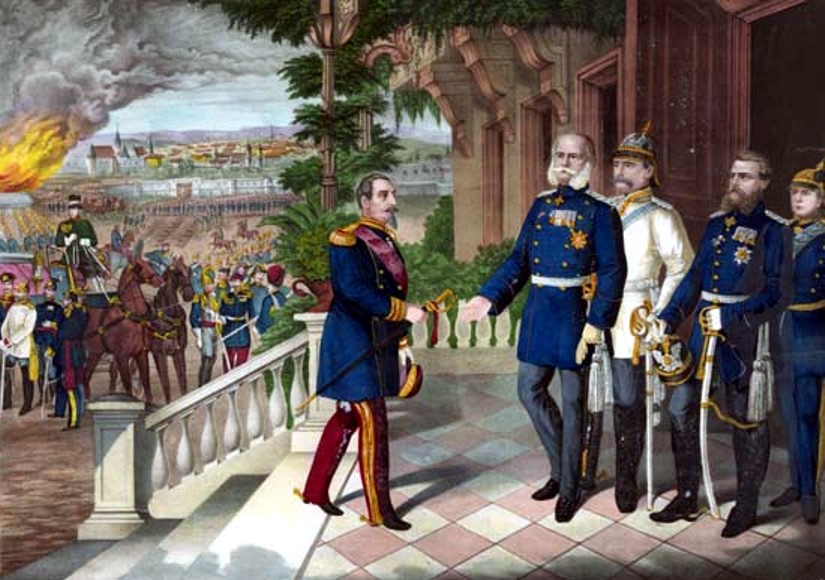 Napoleon III surrenders to Wilhelm I, German King of Prussia, on 2 September 1870, after the Battle at Sedan. The battle marked the decisive defeat of the French in the Franco-Prussian War and led to the fall of the Second French Empire. In Germany, the "Sedantag" was celebrated yearly on the date of this great victory.

Franco-German War, sometimes Franco-Prussian War (German: Deutsch-Französischer Krieg), often referred to in France as the 1870 War (19 July 1870 - 10 May 1871), was a conflict between France and the German kingdom of Prussia, which was backed by the North German Confederation and the South German states of Baden, Württemberg and Bavaria. The thorough German victory brought about the final unification of the German Empire under King William I of Prussia. It also marked the downfall of Napoleon III and the end of the French Second Empire, which was replaced by the Third Republic. As part of the settlement, the territory of Alsace-Lorraine was taken by Germany, which would retain it until World War I. 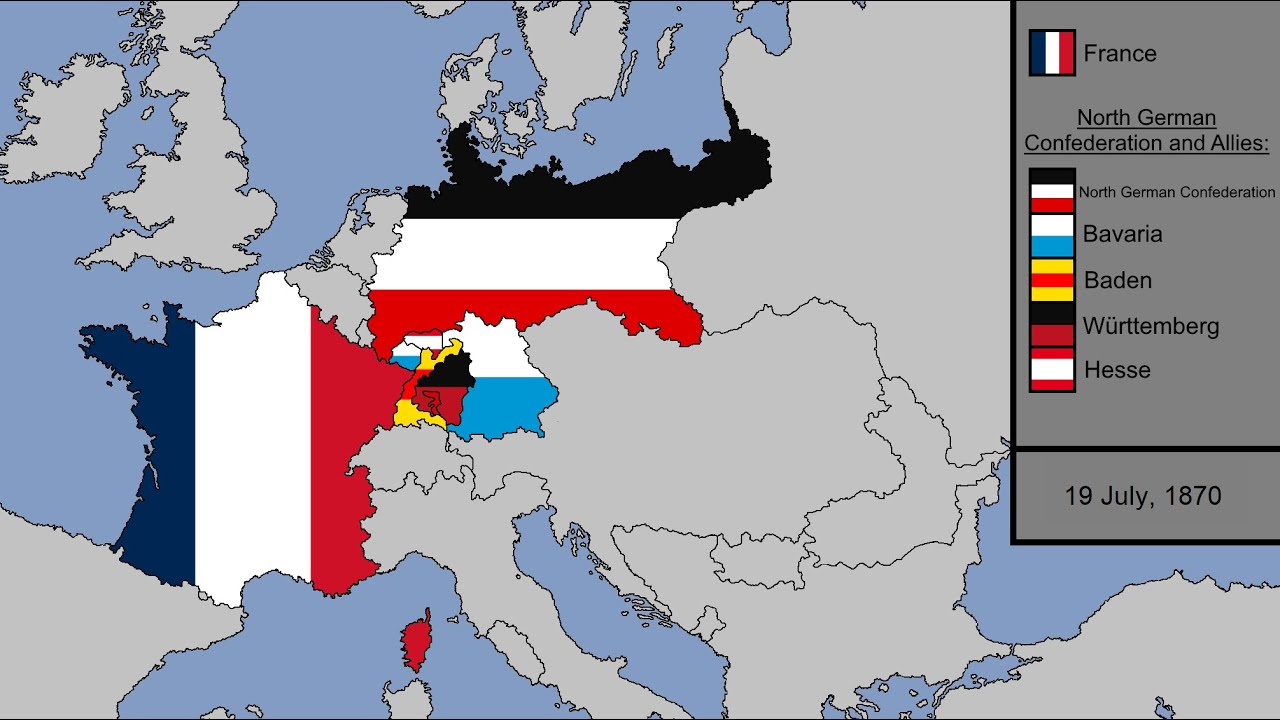 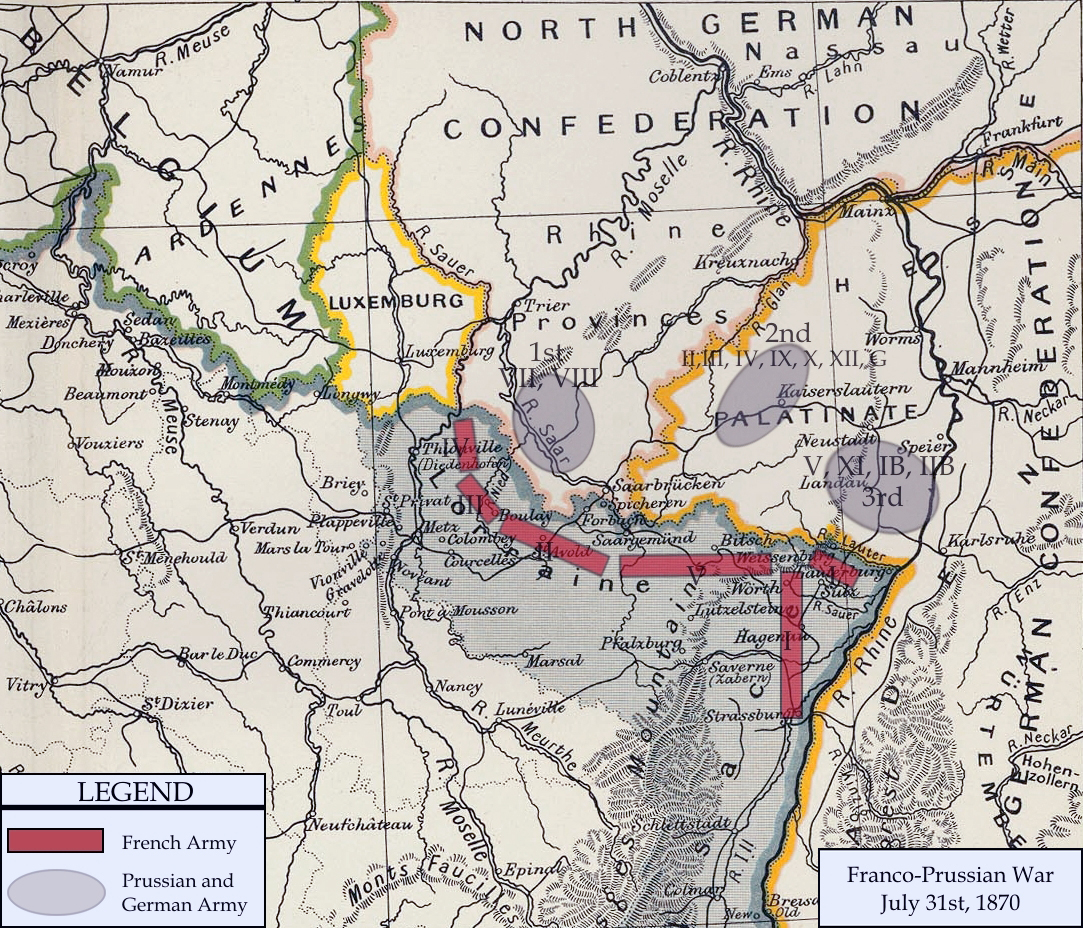 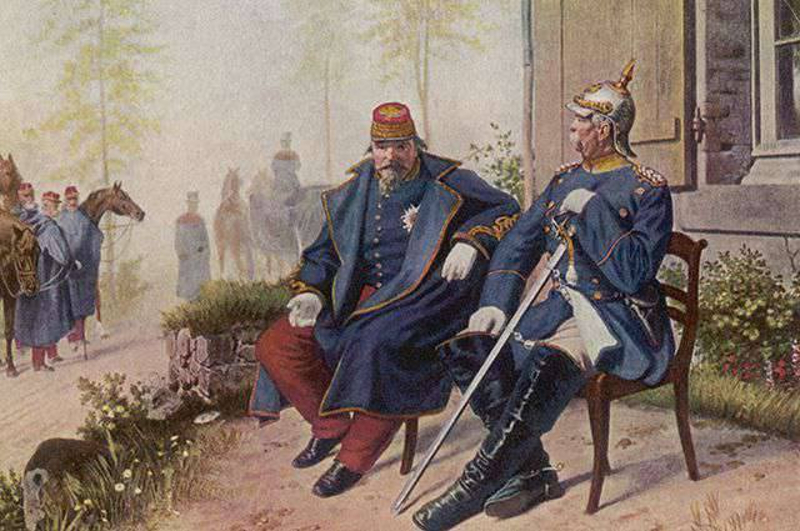 Generalmajor Otto von Bismarck (right) and Napoleon III after his capture in front of the meeting house at Sedan (weaver's cottage in Donchery), depending on the source on 1 or 2 September 1870 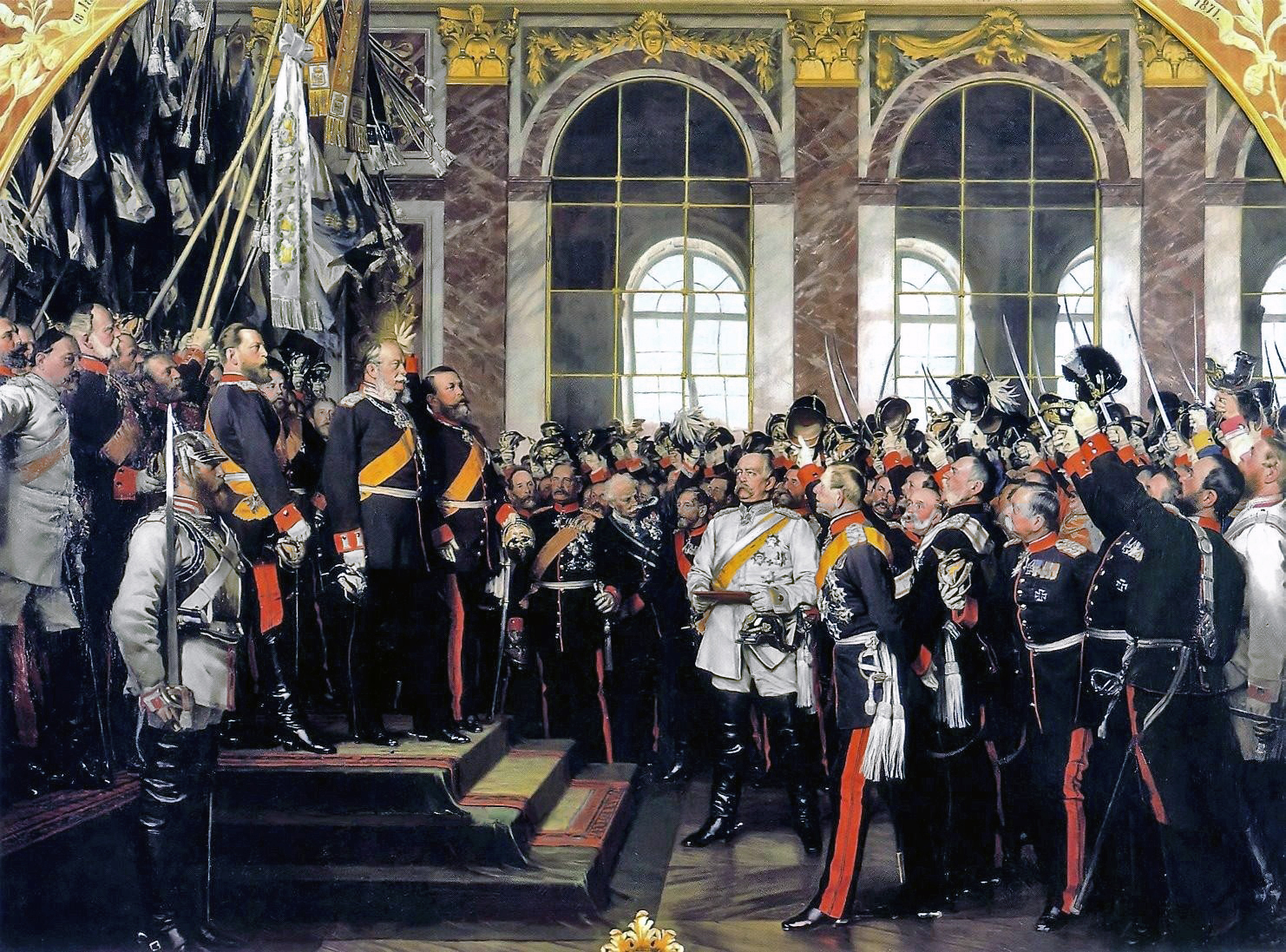 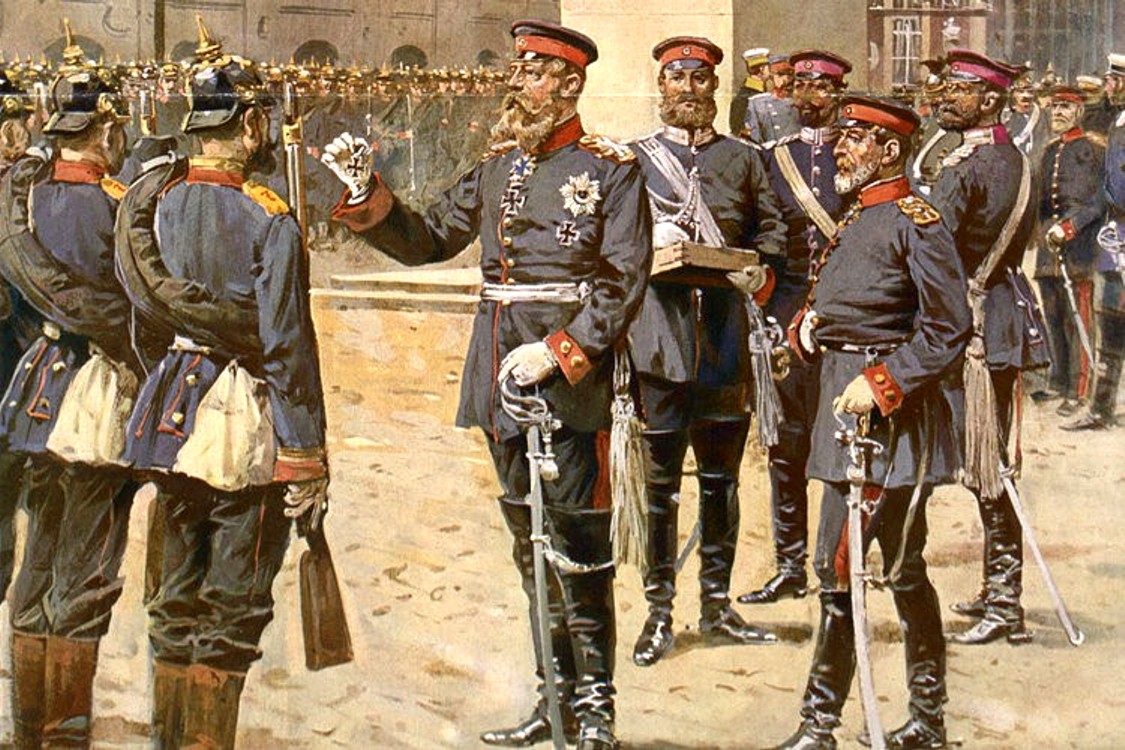 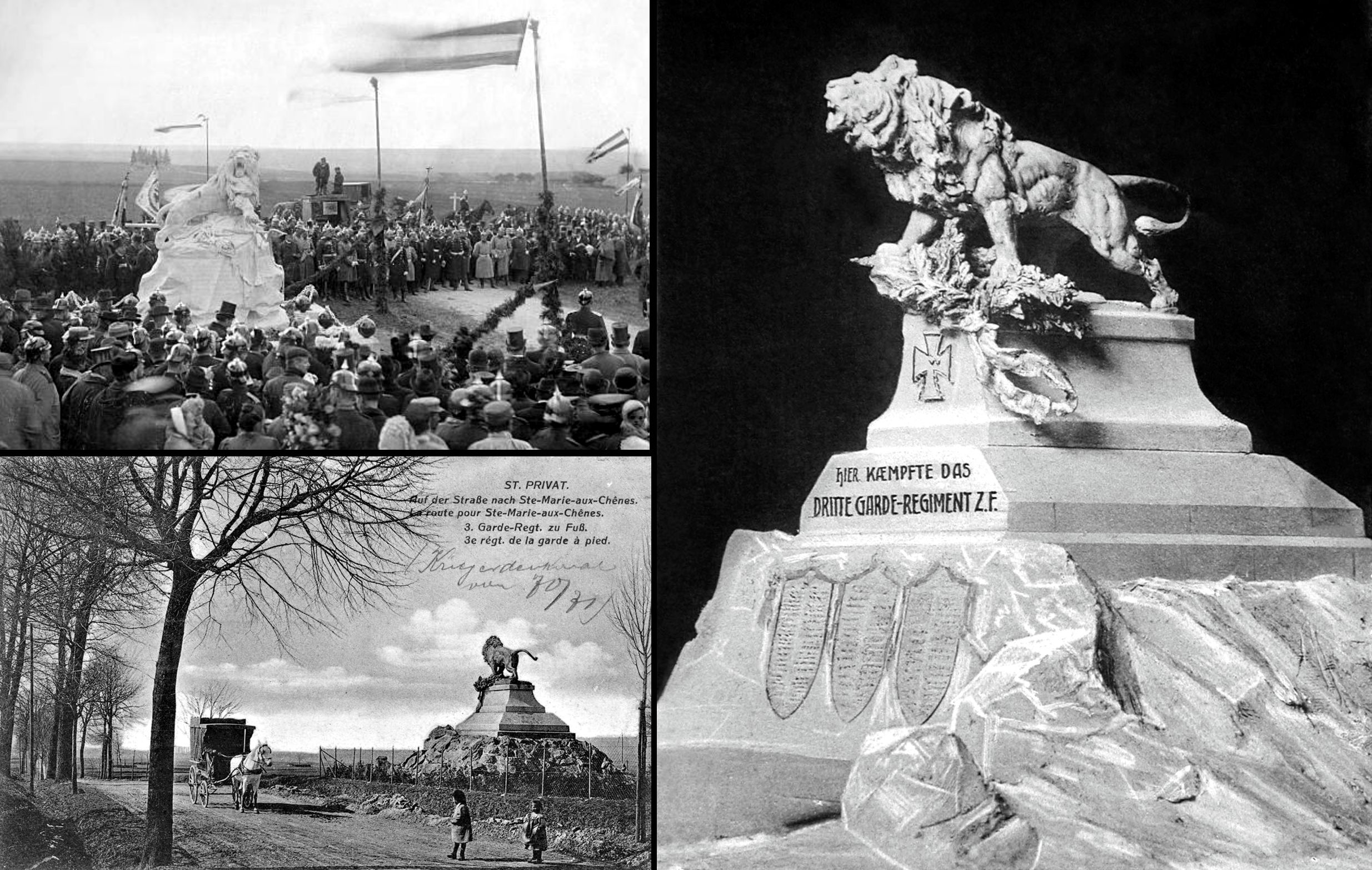 The conflict was a culmination of years of tension between the two powers, which finally came to a head over the issue of a Hohenzollern candidate for the vacant Spanish throne, following the deposition of Isabella II in 1868. The public release of the Ems Dispatch, which played up alleged insults between the Prussian king and the French ambassador, inflamed public opinion on both sides. France mobilized, and on July 19, declared war on Prussia only, but the other German states quickly joined on Prussia's side.

The superiority of the German forces was soon evident, due in part to efficient use of railroads and innovative Krupp artillery. A series of swift German victories in eastern France culminated in the Battle of Sedan, at which Napoleon III was captured with his whole army on 2 September. Yet this did not end the war, as the Third Republic was declared in Paris on 4 September 1870, and French resistance continued under the Government of National Defense and later Adolphe Thiers.

Over a five-month campaign, the German armies defeated the newly recruited French armies in a series of battles fought across northern France. Following a prolonged siege, the French capital Paris fell on 28 January 1871. Ten days earlier, the German states had proclaimed once again (for the first time after the Holy Roman Empire of the German Nation) their union under the Prussian King, uniting Germany as a nation-state, the German Empire and forming the German Army.

The final peace Treaty of Frankfurt was signed 10 May 1871, during the time of the bloody Paris Commune of 1871.

The efficiency of German mobilization contrasted with confusion and delay on the French side. Germany was able to deliver 380,000 troops to the forward zone within 18 days of the start of mobilization on 14 July, while many French units reached the front either late or with inadequate supplies. The German and French armies that then confronted each other were both grouped into right and left wings. After suffering a check by the Crown Prince and Generalfeldmarschall Leonhard Graf von Blumenthal at the Battle of Wörth on 6 August 1870, the commander of the French right (south) wing, Marshal Patrice MacMahon, retreated westward.

That same day, about 40 mi to the northwest, the commander of the French left wing, Marshal Achille Bazaine, was dislodged from near Saarbrücken and fell back westward to the fortress of Metz. His further retreat was checked by the German right wing in two blundering battles on 16 and 18 August, respectively (the Battles of Mars-la-Tour and Gravelotte), and he then took refuge behind the defenses of Metz until forced by starvation to surrender on 29 October.

The French right wing, commanded by MacMahon and accompanied by Napoleon III himself, attempted to relieve Bazaine but was itself surrounded and trapped by the Germans in the disastrous Battle of Sedan on 31 August. Encircled, the 83,000 French troops with Napoleon III and MacMahon surrendered on 2 September. Since Bazaine's army was still bottled up in Metz, the result of the war was virtually decided by this surrender.

French resistance was carried on against desperate odds by a new government of national defense, which assumed power in Paris on 4 September 1870, and proclaimed the deposition of the emperor and the establishment of the Third Republic. On 19 September the Germans began to besiege Paris. Jules Favre, foreign minister in the new government, went to negotiate with the ""Hero of Sedan" Otto von Bismarck, but the negotiations were broken off when he found that Germany demanded both Alsace and Lorraine regions. Léon Gambetta, the leading figure in the provisional government, organized new French armies in the countryside after escaping from besieged Paris in a balloon. These engaged but could not defeat the German forces. Bazaine capitulated at Metz with his 140,000 troops intact on 27 October, and Paris surrendered on 28 January 1871.

German troops fought against the French Republic (Government of National Defense) and its Foreign volunteers. The army before 18 January 1871 (after that German Empire) consisted of:

In addition ~250,000 civilians died, including 162,000 Germans in a smallpox epidemic spread by French POWs. 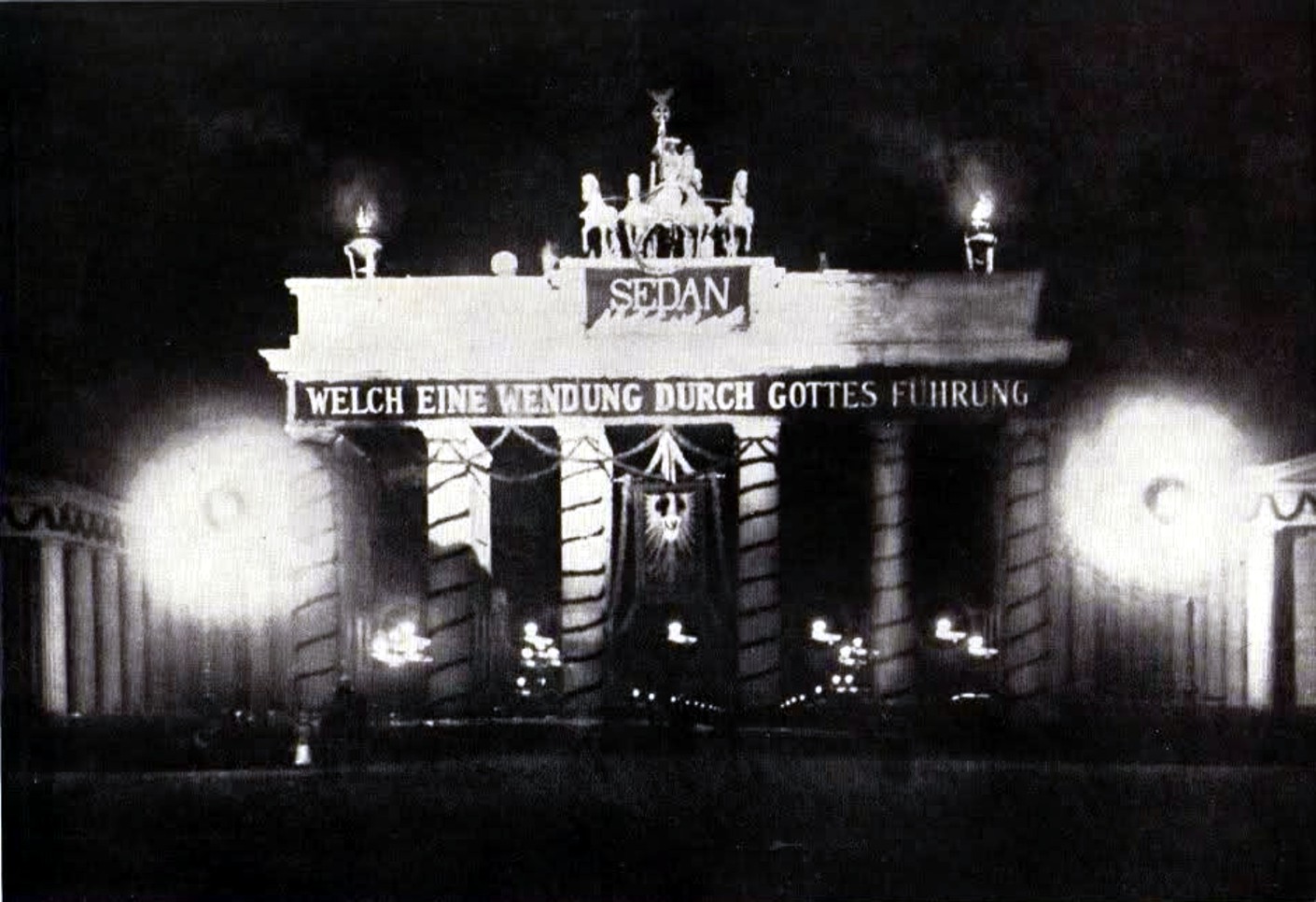 The Brandenburg Gate lit up on Sedantag in 1898. In English, the sign reads "What a change [turn of events] through God's guidance".