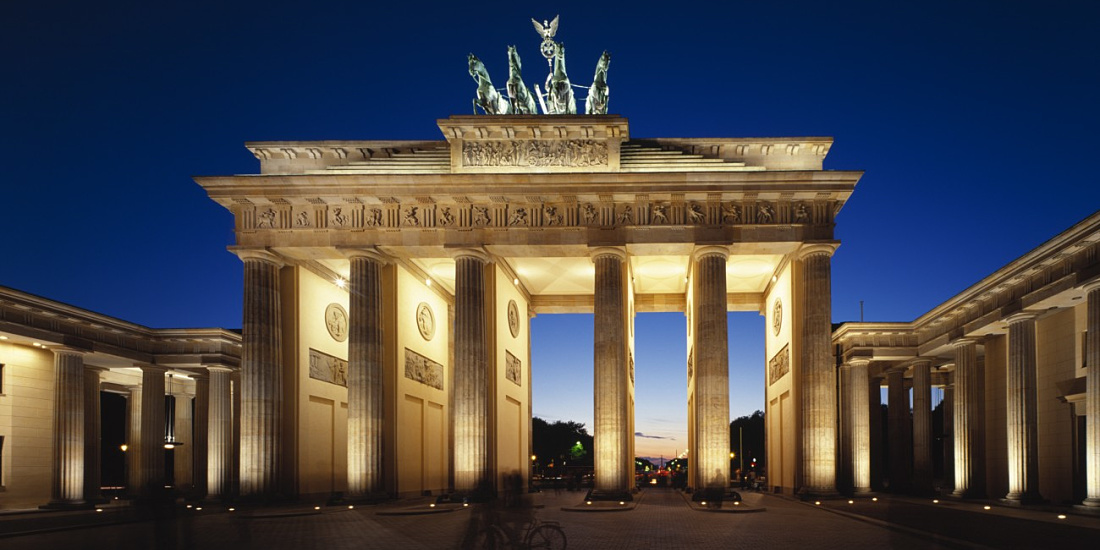 Brandenburg Gate in the 21st century; it is 26 metres high, 65.5 metres long and 11 metres deep, and supported by two rows of six Doric columns.

Brandenburg Gate (German: Brandenburger Tor) is an 18th-century neoclassical monument of Berlin, Germany, standing at the western end of the avenue Unter den Linden on the site of a former city gate that marked the start of the road from Berlin to the town of Brandenburg an der Havel, which was once the capital of the Margraviate of Brandenburg. The victory gate (German: Triumpgtor) has served as a symbol of both the division of Germany and the country’s reunification and is one of Berlin’s most-visited landmarks. Berlin’s triumphal arch has played witness to some of the most significant moments in modern history. 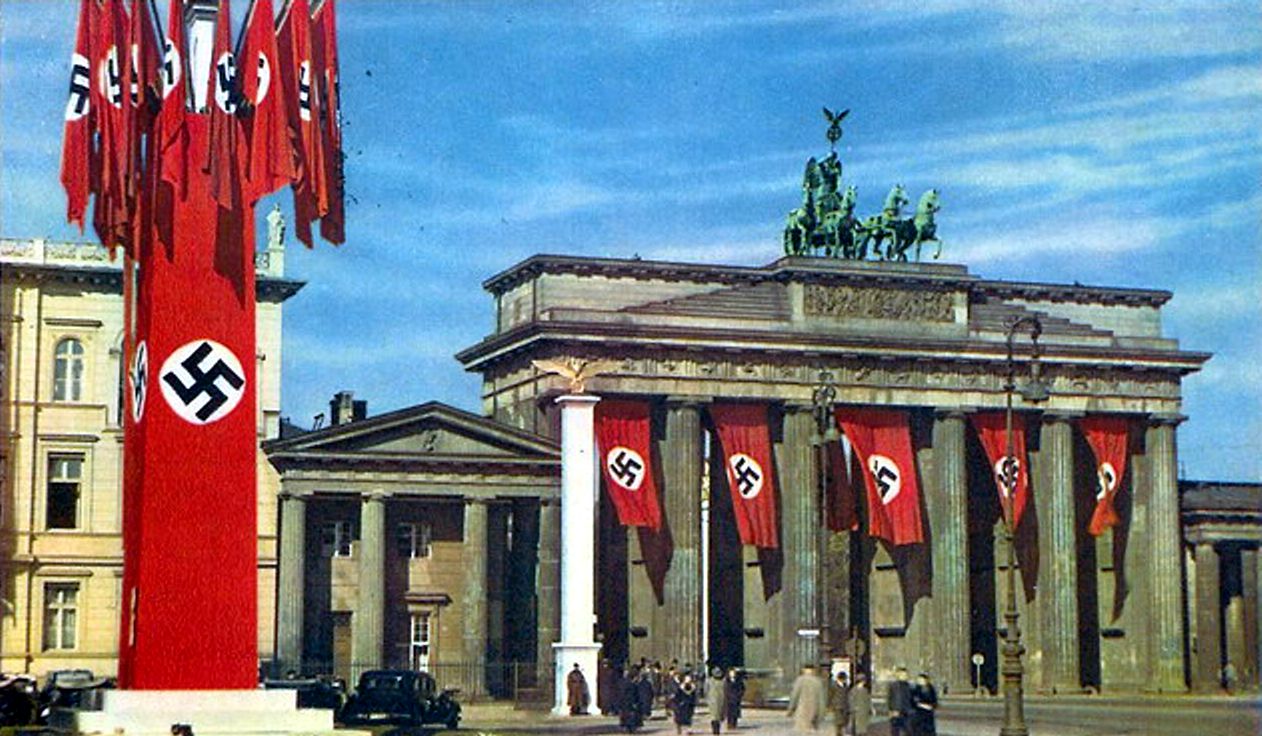 Brandenburg Gate during the Third Reich 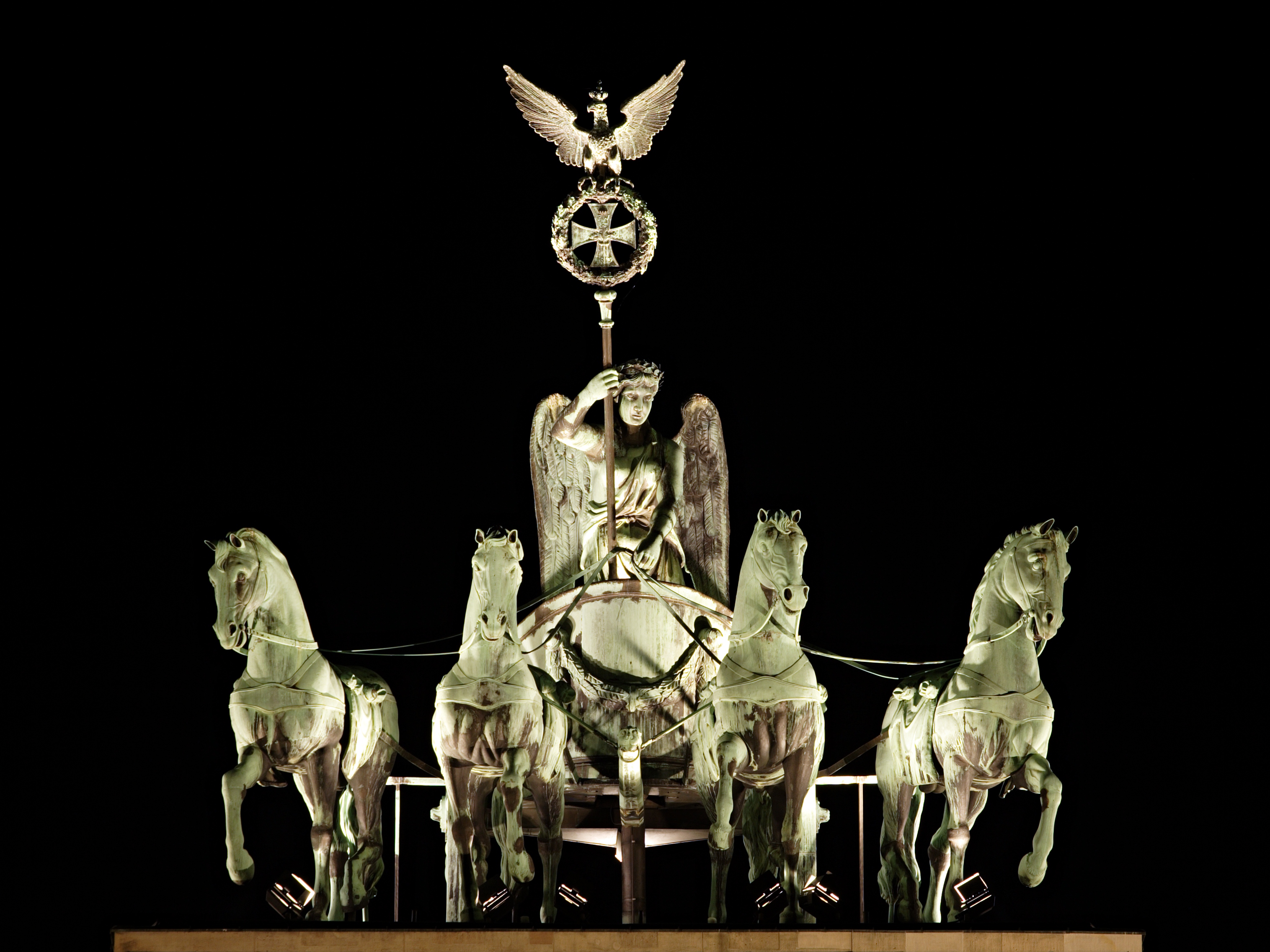 The "Quadriga" at night with the imperial eagle (Reichsadler), an oak leaf wreath and the Iron Cross

Constructed between 1788 and 1791, the Brandenburg Gate was was designed by Carl Gotthard Langhans, architect to the Prussian court, it was inspired by the monumental gateway at the entrance to the Acropolis in Athens. In 1793, the gate was crowned by the Quadriga statue, designed by Johann Gottfried Schadow, with the goddess of victory (German: Siegesgöttin Viktoria). This statue also has its own story to tell. In 1806, when Napoleon’s army took Berlin, the French Emperor had the Quadriga transported to Paris as war booty and a sign of his victory. In 1814, after Napoleon’s forced abdication, the Quadriga was returned to Berlin where it once again adorned the Brandenburg Gate, facing towards the east and the city centre.

Built between 1788 and 1791 by Prussian King Frederick William II as a key entry point to the city of Berlin, Brandenburg Gate was topped off with a statue known as the “Quadriga” (1793), which depicted a statue of the goddess of victory driving a chariot pulled by four horses. The statue remained in place for just over a decade, before falling into the clutches of Napoleon Bonaparte and his Grand Army. After occupying Berlin that fall [27 October 1806] and triumphantly marching beneath the arches of the Gate, Napoleon ordered the Quadriga dismantled and shipped back to Paris. The horse and goddess were hastily packed up in a series of crates and moved across the continent. Napoleon, perhaps preoccupied with the crumbling of his recently established empire, appears to have forgotten about the statue, and it languished in storage until 1814, when Paris itself was captured by Prussian soldiers following Napoleon’s defeat. The Quadriga was returned to Berlin and once again installed atop the Brandenburg Gate, this time with one change: As a symbol of Prussia’s military victory over France, an iron cross was added to the statue. The cross was later removed during the Communist era, and only permanently restored in 1990 during the unification of Germany.[1]

The Brandenburg Gate faces Pariser Platz, regarded as one of the city’s most attractive squares. By the end of the Second World War and the allied bombing terror, the buildings around this historical square were in ruins. In 1946, with the post-war division of Germany and Berlin, the Brandenburg Gate was in the Soviet sector. When the Berlin Wall went up in 1961, the Gate stood in an exclusion zone in an arc of the Wall, inaccessible for locals and visitors alike. When the Wall fell, 100,000s of people gathered here for the Brandenburg Gate’s official opening on 22 December 1989 – and soon afterwards, crowds thronged the area to celebrate their first joint New Year’s Eve in this once-divided city. Reconstruction at this prime location only started in the 1990s after German reunification, and the buildings now include elegant town houses, embassies and the impressive five-star Hotel "Adlon".

The Brandenburg Gate is characterized by six 15 meters high Doric columns on each sides wich are grooved by ionic style. At the bottom the columns have a diameter of 1.75 meters. The columns have got a constructional difference to the other classical paragons: At the inner surface they are massively intensified with stonework. The attic and the inner surfaces of the passages are covered with reliefs wich are showing among other things the deeds of Herkules. Both Gatehouses have got large sculptures of Mars, the roman god of war, and the goddess Minerva with a lance. The sculpture of Minerva was created by Johann Daniel Meltzer but in Second World War it was destroyed and between 1951 and 1952 it was displaced by a copy by the sculptor collective Kranolda. The sculpture of Mars was created by Carl Friedrich Wichmann. Both of the statues are coming from Johann Gottfried Schadow in 1792. Originally the Gate had Gatehouses at both sides wich were built for the military guards and the tax collector. In 1868, with the end of the tariff and the excise wall, the Gatehouses were replaced by open columned halls wich were created by the Schinkel student Heinrich Strack. By designing those he focussed on the design of the gate. The top of the Brandenburg Gate crowns a quadriga. It is a copper casted sculpture with a height of 5 meters. It was also built by Schadow. The figure represents the winged goddess of victory Victoria looking towards the City Palace in the east. It gives the impression of Victoria pulling her cart drawn by four horses into the city.[2]