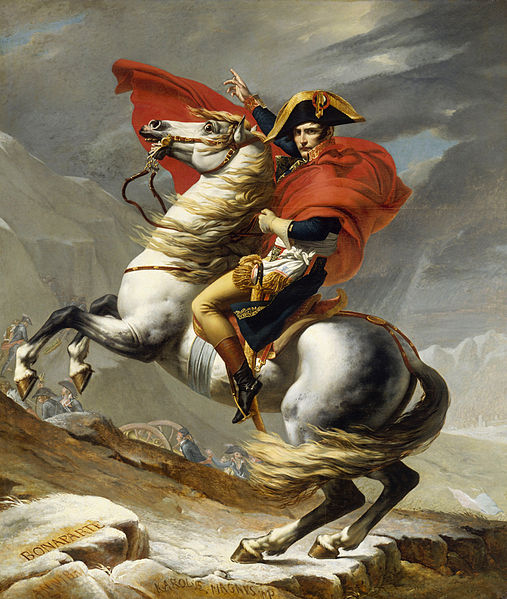 Napoleon Bonaparte (15 August 1769 – 5 May 1821) was a military officer during the French Revolution and later the ruler of France, first as "First Consul of the French Republic" and later, after 1804, as "Emperor of the French". Today, he best known for the extensive European wars during which he commanded French armies marching across most countries in Europe, even all the way to Moscow, being defeated during the German campaign of 1813 and finally 1815 by the Prussians and British during the War of the Seventh Coalition. 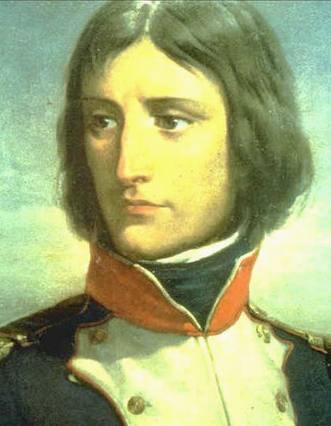 Bonaparte as a young Officer 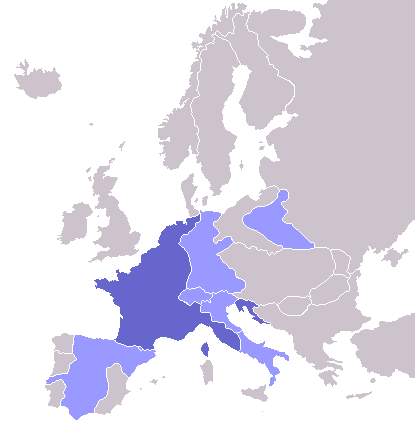 France's land during the Napoleonic Era

He spread some of the policies of the French Revolution to other parts of the world, but reversed others, such as by reinstituting slavery in the French colonies and prohibiting inter-racial marriages.

"Years later, questioned by his friend Truguet about what he had done in Saint-Domingue, an enraged Bonaparte declared that, had he been in Martinique during the Revolution, he would have supported the English rather than accept an end to slavery. “I am for the whites because I am white; I have no other reason, and that one is good,” he said. “How is it possible that liberty was given to Africans, to men who had no civilization, who did not even know what the colony was, what France was? It is perfectly clear that those who wanted the freedom of the blacks wanted the slavery of the whites."[1] See also Haiti.

Continuing policies from the French Revolution, Napoleon removed previous restrictions on Jews/Judaism, sometimes referred to as Jewish emancipation. However, he also in 1808 issued the "Infamous Decree", which among other measures restricted Jewish money lending, annulled certain debts owed to Jews by non-Jewish debtors, and encouraged Jews to work in agriculture and craftsmanship. The motives for these actions have been debated. Less politically views include that Napoleon hoped to gain support from Jews, privately expressed anti-Semitic views, wished to stop activities such as argued exploitative usury against non-Jews, and thought that giving Jews equal rights and responsibilities would cause assimilation and even the disappearance of Jews as a separate group.[2] See also Jewish question.

"Count Louis Mathieu Molé (1781–1855), Napoleon’s informal advisor on Jewish affairs, resurrected the discussion as part of a personal effort to rescind Jewish ‘emancipation.’ [...] He persuaded Napoleon to convene a ‘Grand Sanhedrin’ — a kind of ‘Elders of Zion’ meeting — where Jewish leaders from across France would be compelled to attend and answer questions about the nature of Judaism and Jewish culture as it related to interactions with Frenchmen. Each of these Jewish notables was issued with Molé’s Instructions to the Assembly of Jewish Notables (1806), a summons to attend the Sanhedrin and a list of questions they were expected to answer. The message to the Jews was abrupt: “Called together from the extremities of this vast empire, no one among you is ignorant of the object for which His Majesty has convened this assembly. You know it. The conduct of many among those of your persuasion has excited complaints, which have found their way to the throne: these complaints were founded on truth; and nevertheless, His Majesty has been satisfied with stopping the progress of the evil.” Molé put to the Jewish leaders a number of questions concerning, among other things, intermarriage, loyalty to the state, Jewish attitudes to the laws of the state, and the practice of usury. Molé stated “You will hear the questions submitted to you, your duty is to answer the whole truth on every one of them.” But, of course, the answers were far from truthful, even if they were masterfully crafted works of Talmudic argumentation."[3]

The Jewish Rothschild family was of major importance in financing the wars against Napoleon Bonaparte.

The main site of anti-Napoleonic nationalism was in the German states, some of which had been absorbed by France, but most of which were in the Confederation of the Rhine. The German nationalist movement rebelled not only against French rule, but against the entire French intellectual tradition. The years of French domination saw a remarkable flowering of thought and art in Germany, with philosophers and artists such as Goethe, Schiller, Herder, Kant, Hegel, and Beethoven rising to the fore. Against the dominant tradition of French Enlightenment Rationalism that underlay the entire Napoleonic empire and its rules, German intellectuals now began a revolution in thought called Romanticism. Romanticism challenged nearly every aspect of French Rationalism. Since the French Empire was built on French Rationalism, the policies of the empire came under attack. The Enlightenment idea of universal laws that applied to everyone came under attack. J.G. Fichte, who drew on the work of J.G. Herder(discussed in Commentary, below) was a German philosopher and Romantic who argued that each person's inner self determined their morality. In 1800, Fichte proposed a "Closed Commercial State", advocating a centralized state that could isolate itself from the world to develop its own Volksgeist, a word describing a nations distinct sense of self. When Germany fell under French domination, Fichte argued (like Herder) that there was a special German "spirit" [Deutscher Geist]. Unlike Herder, Fichte claimed that the German spirit was better than that of other nations, and for that reason, it needed to be carefully protected from being perverted by contact with outside influences, such as the French influence. Thus, Napoleon's domination of Germany helped propel both a political and intellectual reaction, fueling the growth of German Nationalism and Romanticism. [...] Britain was also strongly swept by anti-Napoleonic nationalism. The years of Napoleonic rule were also crucial years in the development of British manufacturing through the Industrial Revolution. British workers were being horribly exploited, working long hours at monotonous and dangerous jobs for little pay. Unemployment was high. A workers' revolt might well have happened if the British people hadn't had Napoleon to rally against. Opposition to Napoleon unified Britain, and may be one factor explaining why workers didn't revolt against the factory system in this still early, fairly oppressive stage of the Industrial Revolution. Two exceptions to the general rule that French dominance created local nationalism were Italy and the Grand Duchy of Warsaw. The Italians, lacking a unified history and broken into several states under Napoleon, never developed a strong anti-Napoleon nationalist movement. The Poles were also quite happy with their new, restored state. Even if it wasn't really independent, at least they had a state, rather than being split up and controlled by Russia, Prussia, and Austria, which was what would likely happen if Napoleon hadn't been supporting the Grand Duchy.[4]

Acknowledged two illegitimate children, both of whom had issue:

May have had further illegitimate offspring: