From Metapedia
(Redirected from SA)
Jump to: navigation, search 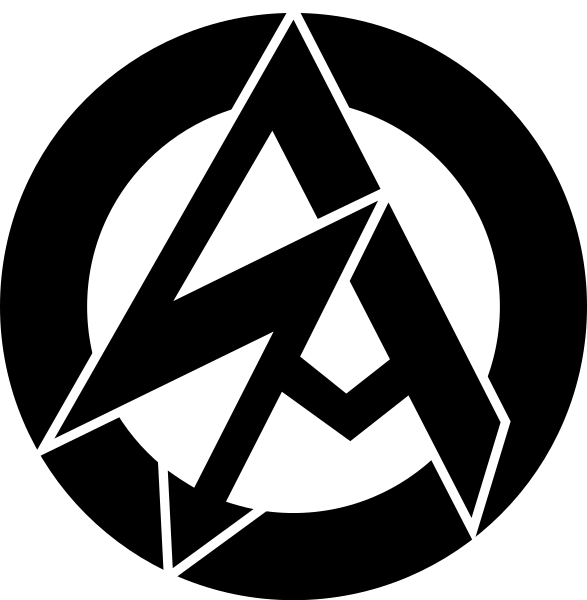 The Sturmabteilung or SA (German for "Storm Detachment", usually translated as Stormtroopers) functioned as a paramilitary organization of Adolf Hitler's National Socialist German Workers Party (NSDAP) which played a key role in the party's rise to power, until they were superseded by the SS after the Night of the Long Knives. 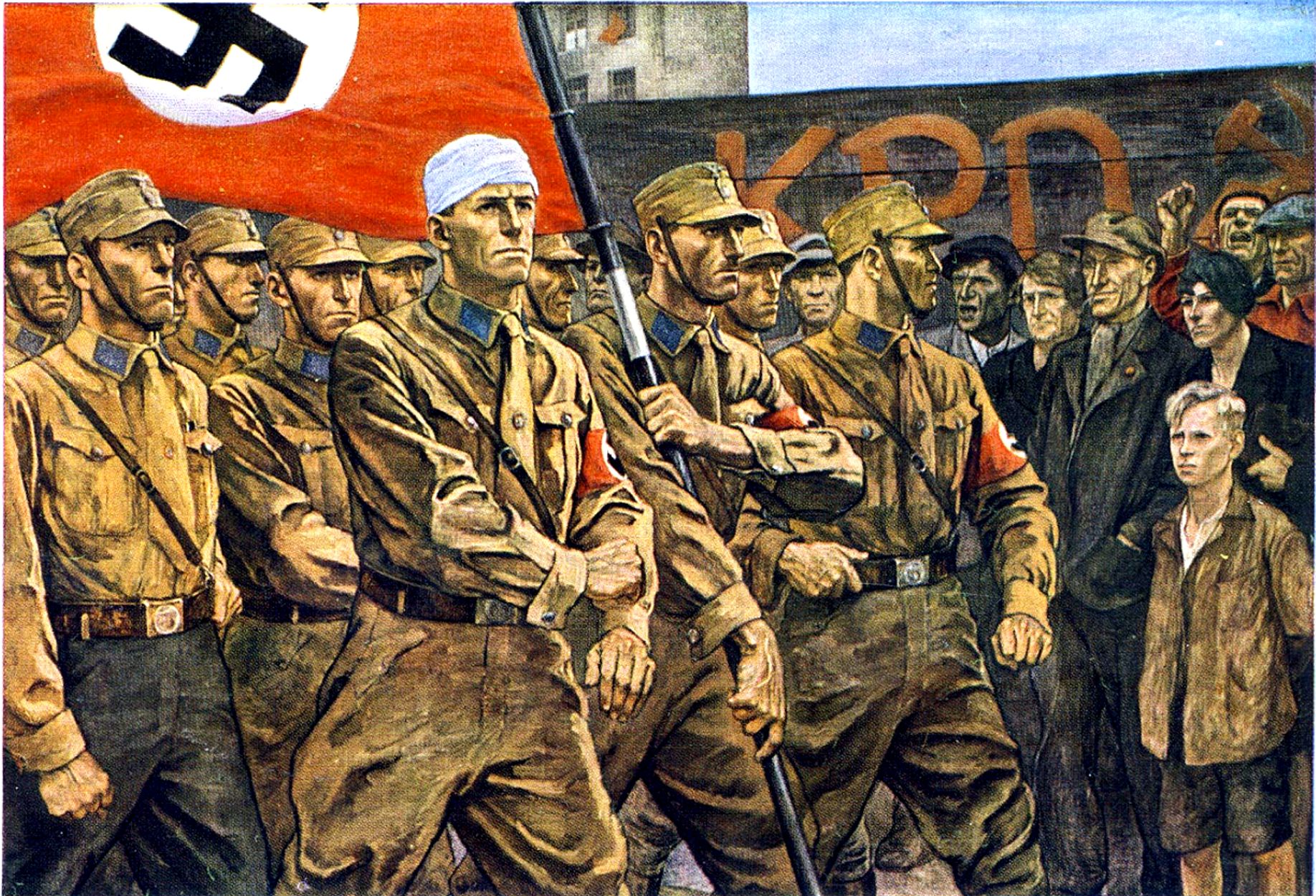 SA men were often called "brown shirts", (in German "Braunhemden") for the color of their uniforms, and to distinguish them from the Schutzstaffel (SS), who wore black and brown uniforms (compare the Italian Blackshirts). Brown-colored shirts were chosen as the SA uniform because a large batch of them was cheaply available after World War I, having originally been ordered for German troops (Schutztruppe) serving in Africa. 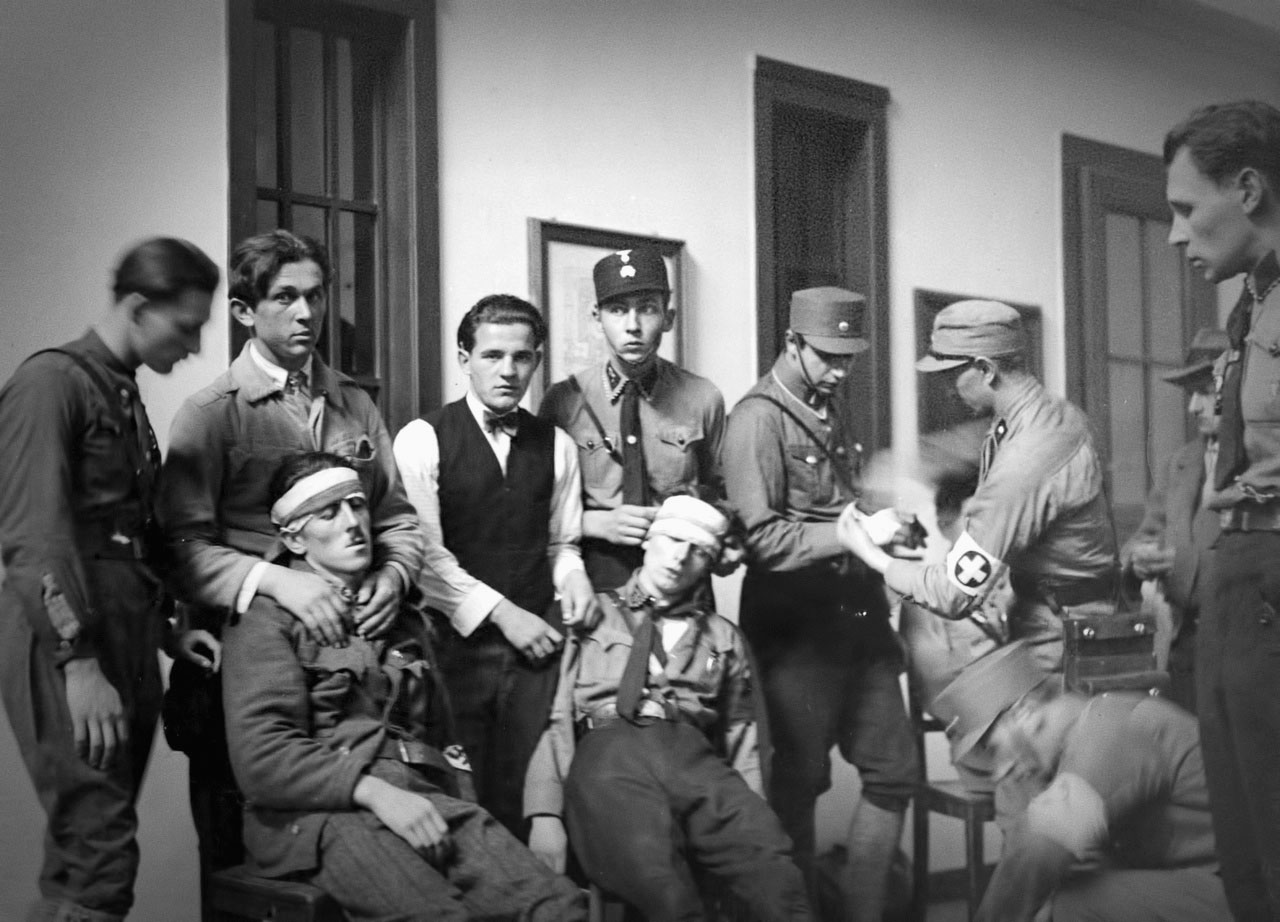 Young SA men after a street fight with communists

The term Sturmabteilung predates the founding of the NSDAP in 1919. It originally comes from the specialized assault troops (Sturmbataillone) used by the Imperial German Army in 1918 in World War I utilizing Hutier infiltration tactics. Instead of a large mass assault, the Sturmabteilung was organized into small squads of a few soldiers each. First applied during the German Eighth Army's siege of Riga, then again at the Battle of Caporetto, their wider use in March 1918 allowed the Germans to push back British and French lines tens of kilometers.

In Munich in January 1920, Hitler created the Ordnertruppen (order troop) or Saalschutz-Abteilung (meeting hall protection detachment), a strong group of former WW-I- and Freikorps-soldiers (but also soldiers of the Bavarian Reichswehr) and beer hall brawlers in order to protect gatherings of the party from disruptions from Social Democrats- and Communists riot groups. On 12 November 1920, the Saalschutz (short: S.S.) was re-named Turn- und Sportabteilung der NSDAP with it's leader Emil Maurice.

On 4 November 1921, the National Socialist party held a large public meeting in the Munich Hofbräuhaus. After Hitler had spoken for some time the meeting erupted into a melee in which a small company of Ordnertruppen distinguished itself by thrashing the opposition. After this the organisation came to be called the SA (other sources claim the re-naming on 5 October 1921). Under their popular leader Ernst Röhm, the SA grew in importance within the Party's power structure, initially growing in size to thousands of members.

From April 1924 until late February 1925 the outlawed SA was known as the Frontbann (de) to avoid the temporary ban on the party. The SA fought communist groups throughout the 1920s, typically in minor street-fights called Zusammenstösse (clashes).

In 1922, the Party created a youth section, the Jugendbund, for male youngster between the ages of 14 and 18 years. Its successor, the Hitler Youth, remained under SA command until May 1932.

The leader of the SA was known as the Oberster SA-Führer or Oberster Führer der SA, translated as Supreme SA Leader, a titular position. The following men held this position throughout the existence of the SA:

To centralize the loyalty of the SA, Adolf Hitler assumed command of the entire organization and remained Oberster SA-Führer for the remainder of the group's existence to 1945. The day to day running of the SA was conducted by the Stabschef SA (SA Chief of Staff). After 1931, it was the Stabschef who was generally accepted as the Commander of the SA, acting in Hitler's name.

The following personnel held the position of Chief of Staff (Chef des Stabes or Stabschef) of the SA (Chef des Stabes der SA), who oversaw the day-to-day operations of the Gruppe (consisting of multiple brigades) and was therefore considered the actual leader of the SA:

Wagener held the title of Stabschef, with the rank created by Ernst Röhm. Initial insignia for the Stabschef consisted of an oak leaf patch worn on the collar of the stormtrooper uniform. 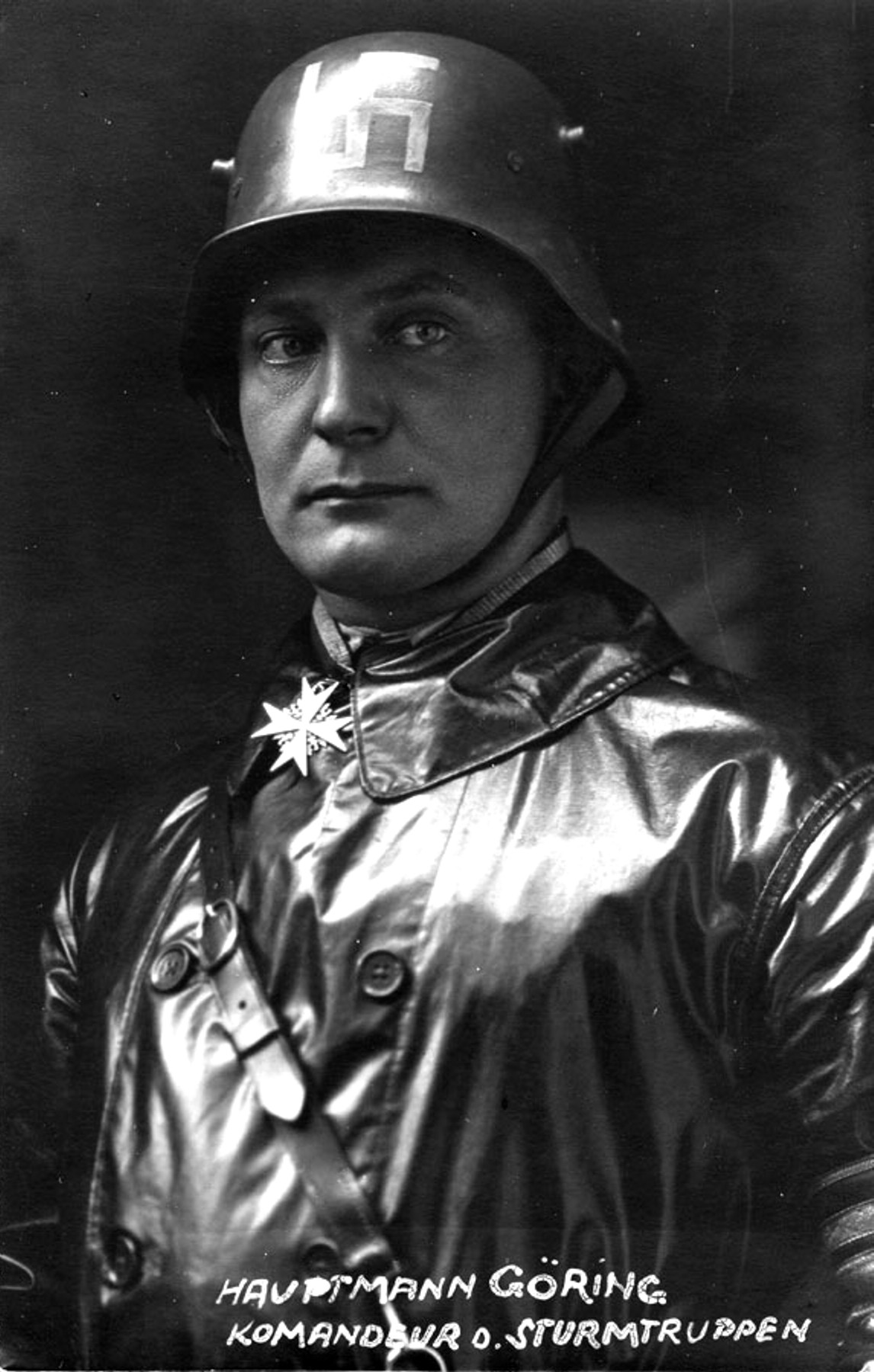 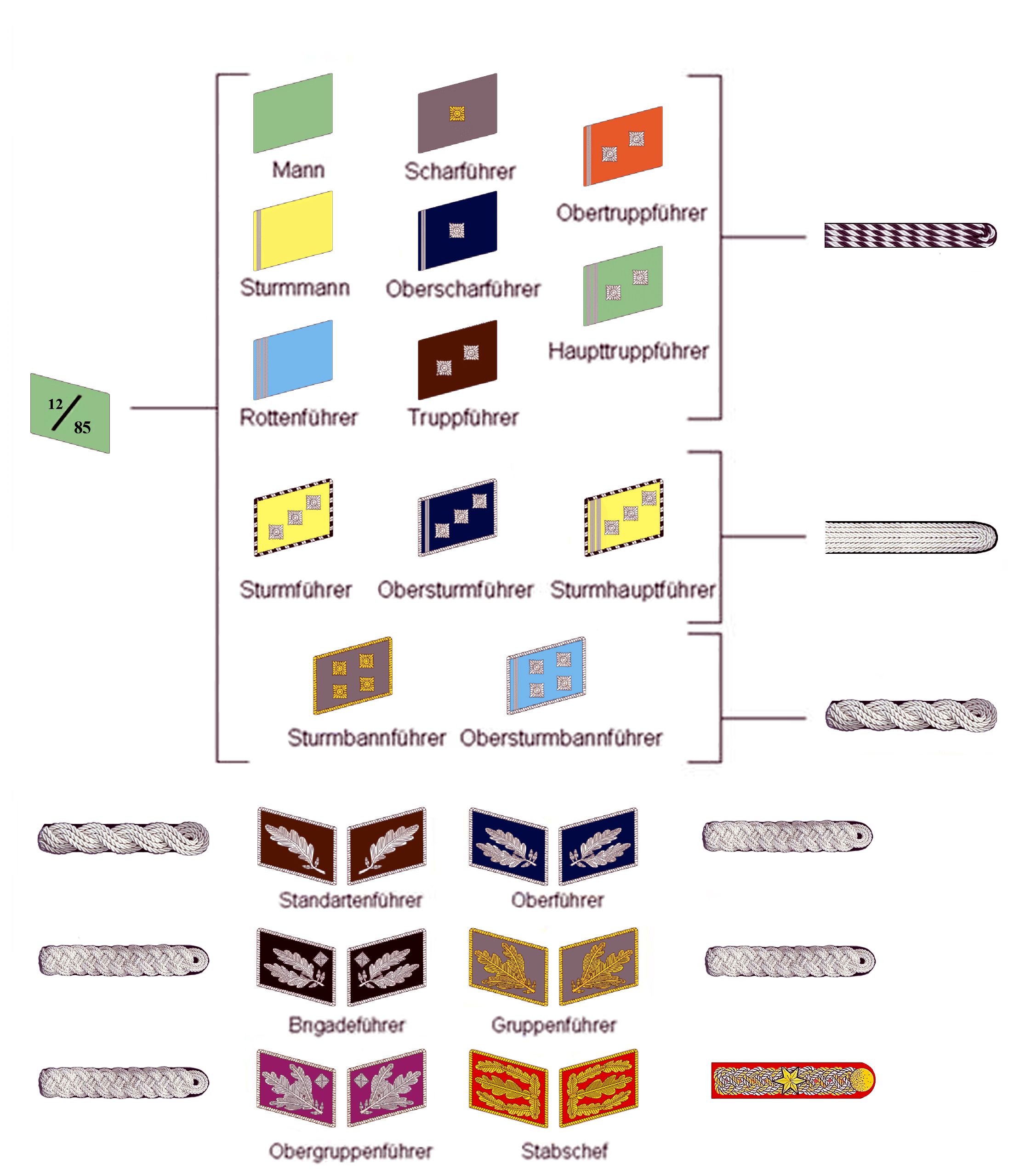 The SA ranks would be adopted by several other Party groups, chief among them the SS. At the start of the detachment's existence, the SA had four primary titles:

SA ranks by the close of the 1920s with Reichswehr and UK equivalent: