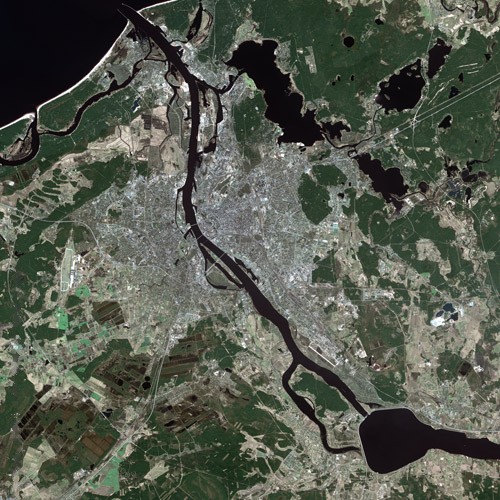 Riga is the capital and largest city of Latvia, a major industrial, commercial, cultural and financial centre of the Baltic region, and an important seaport, situated on the mouth of the Daugava. In 1935 it had 385,063 inhabitants[5], but by 2010 that had risen to 709,145. It is the largest city of the Baltic states and third-largest in the Baltic region, behind Saint Petersburg and Stockholm (counting residents within the city limits).

The city of Riga was founded in 1200 by Albert von Buxhovden, Bishop of Uexkull, a former Canon of Bremen Cathedral, and founder of the military religious Order of the Brothers of the Sword. He built Riga Cathedral, with new bells, and engaged in a major building programme.[6].

Riga developed into a major Baltic port, and by 1912 Riga, Libau and Windau (all in Latvia), together handled more shipping than St Petersburg. Between 1908 and 1911 those same ports, on which converged three of Russia's great railways, dealt with no less than a third of all exports and imports of European Russia. Riga became the biggest wood-export harbour in Europe and doubled its shipping trade between 1900 and 1913.[7]

From an early date there had been a cathedral school in Riga, which closed its doors during the early Reformation period. The council however, engaged in 1527 the Dutchman Jacobus Battus as a Latin master, and he reopened the Domschule as an evangelical school, based upon Melanchthon's Praeceptor Germaniae curriculum. The town council also offered university scholarships in the 1530s, mostly to Rostock or Wittenberg. From 1525 publications, mostly religious, began appearing in Latvian, the first full book, the Cathechismus Catholicorum in 1585.[8]

Part of this article consists of modified text from Wikipedia, and the article is therefore licensed under GFDL.
Retrieved from "http://en.metapedia.org/m/index.php?title=Riga&oldid=411801"
Categories: