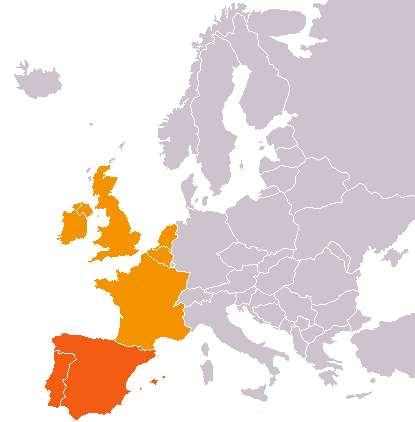 Western Europe is mainly a socio-political concept forged during the Cold War, which largely defined its borders. Its boundaries were effectively forged during the final stages of World War II and came to encompass all European countries which did not come under Soviet control and influence. As such these capitalist First World countries did not see communist regimes imposed upon them. Neutral countries were classified by the nature of their political regimes.

In common perception and usage, Western Europe was, and still is in a lesser extent, distinguished from Eastern Europe by differences of culture, politics, and economics and its borders have little to do with clear and precise geography. Cultural and religious boundaries between these two regions are subject to considerable overlap and – most importantly – historical fluctuation, which makes a precise understanding somewhat difficult.

The term is commonly associated, but not clearly delimited, with liberal democracy, capitalism, and also with the European Union. Most of the countries in this region share so called Western culture, and many have economic, historical, and political ties with countries in North and South America.