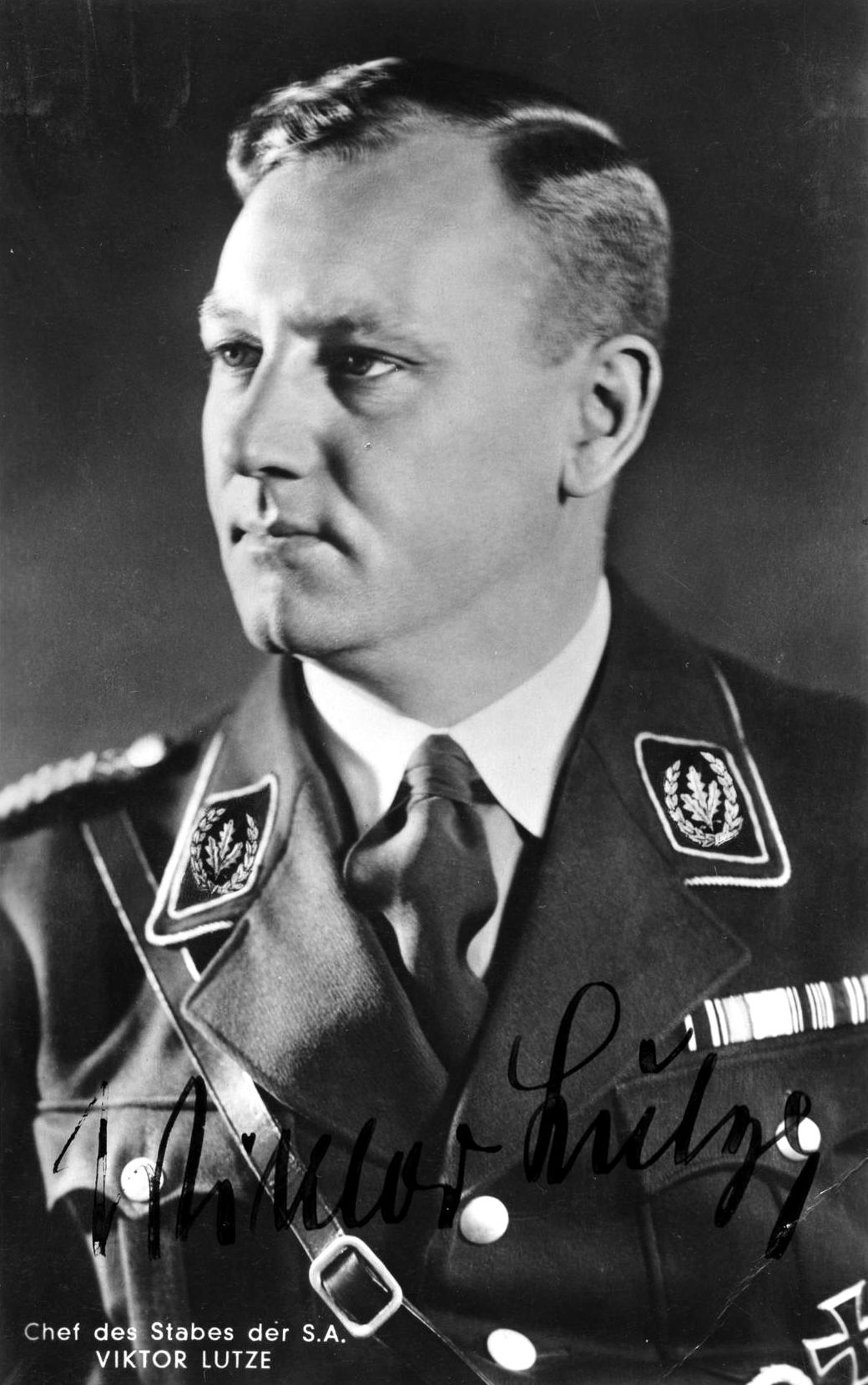 Viktor Heinrich Lutze (b. 28 December 1890 in Bevergern, Province of Westphalia, Kingdom of Prussia, German Empire; d. 2 May 1943 in Potsdam, Province of Brandenburg, Free State of Prussia, National Socialist Germany) was a German senior postal clerk, officer of the Imperial German Army, the Vorläufige (preliminary) Reichswehr and the SA, where he succeeded Ernst Röhm as Stabschef and Reichsleiter. SA-Obergruppenführer Wilhelm Schepmann took over the SA after Lutze's death on 19 August 1943. 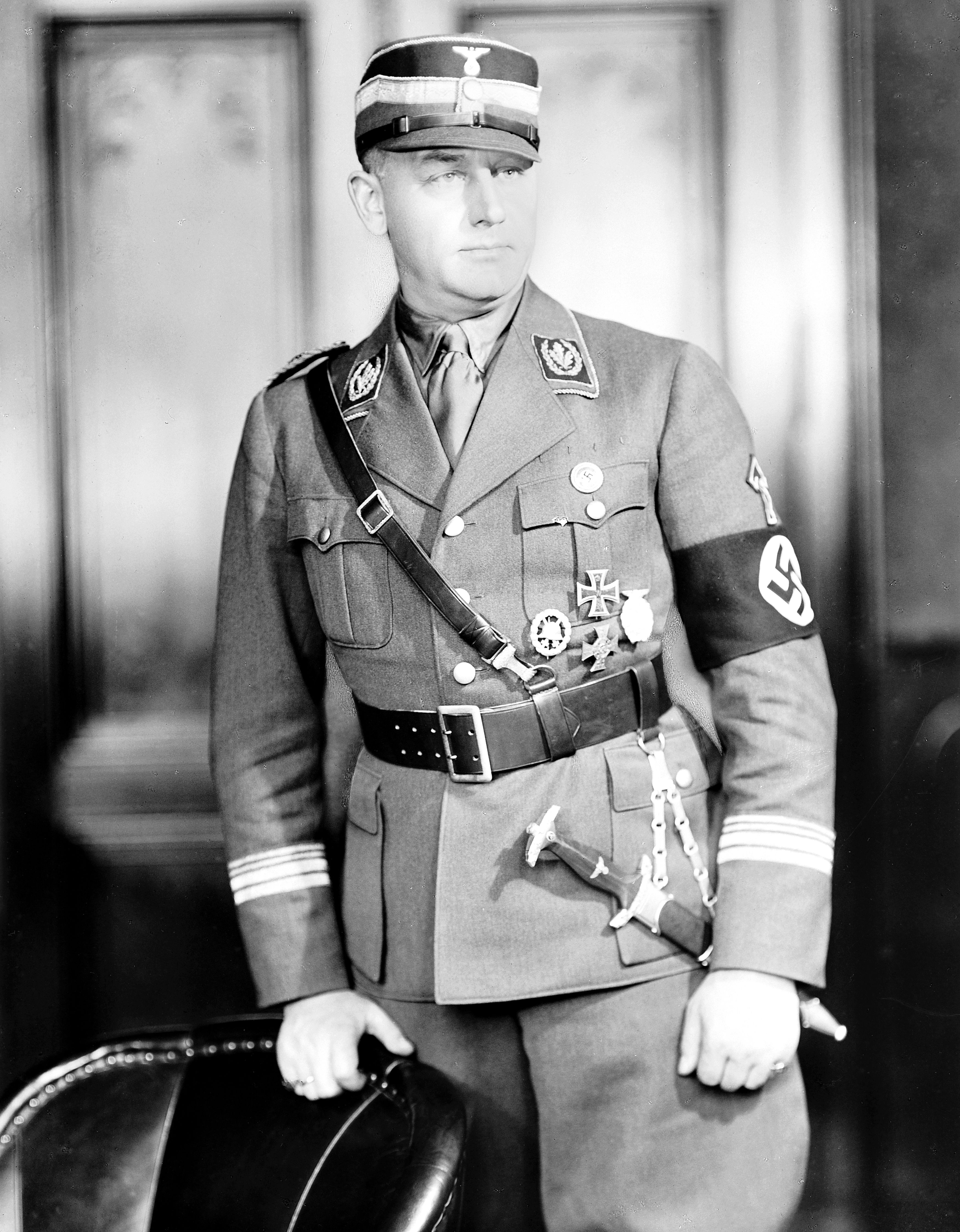 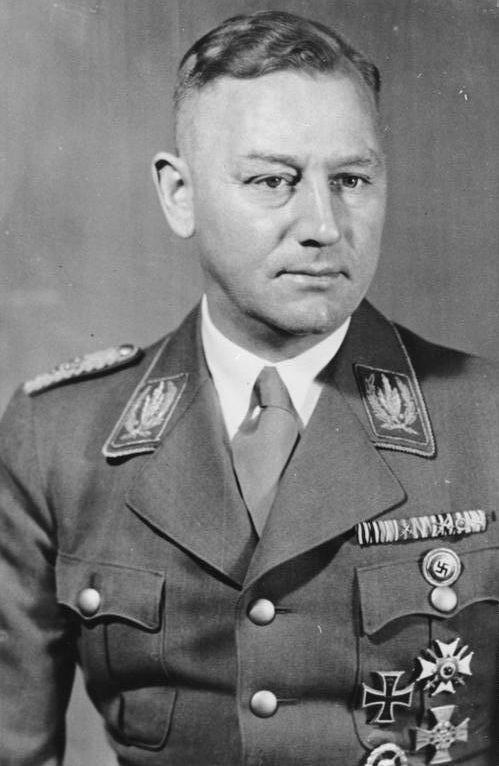 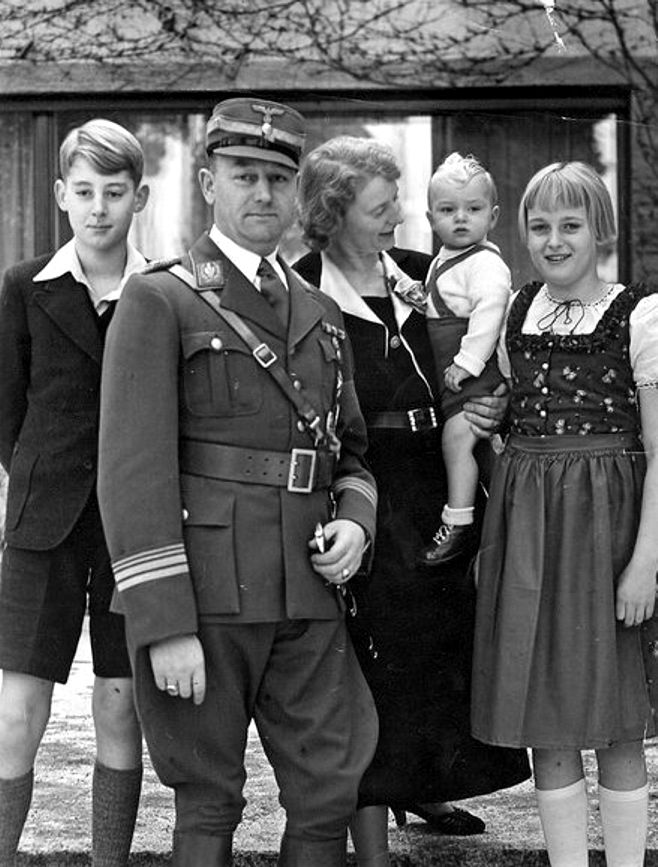 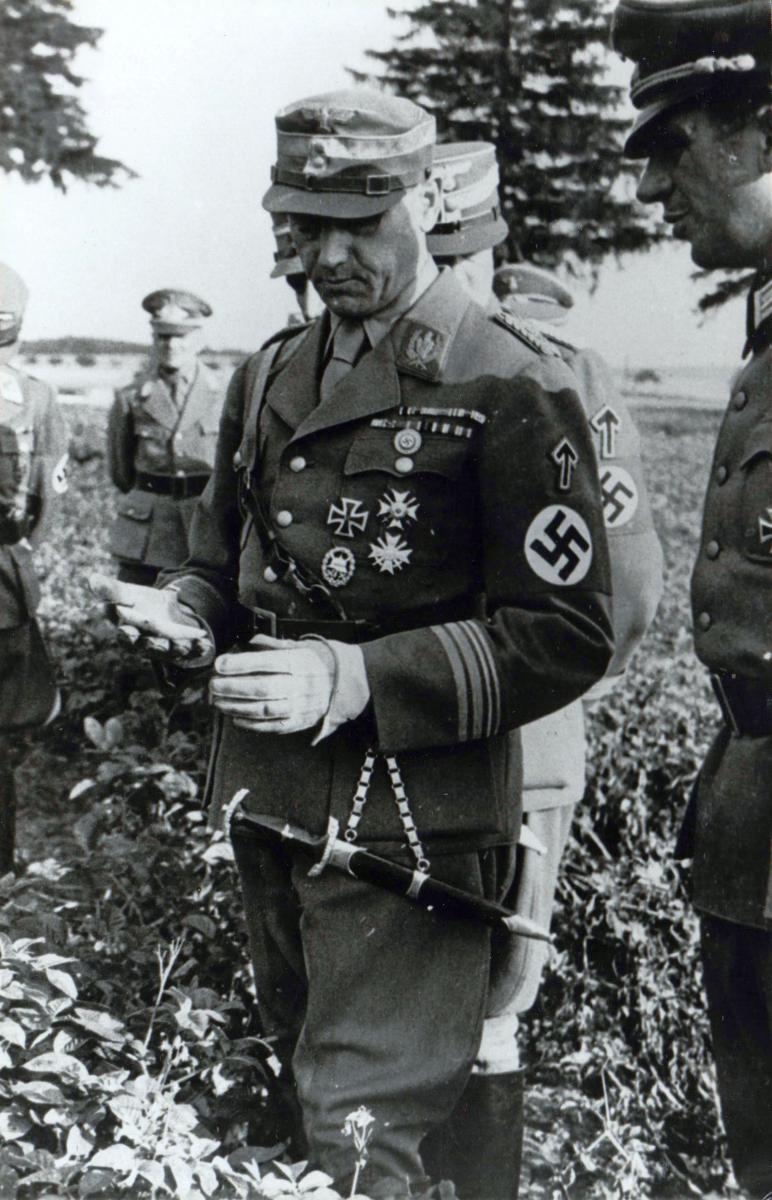 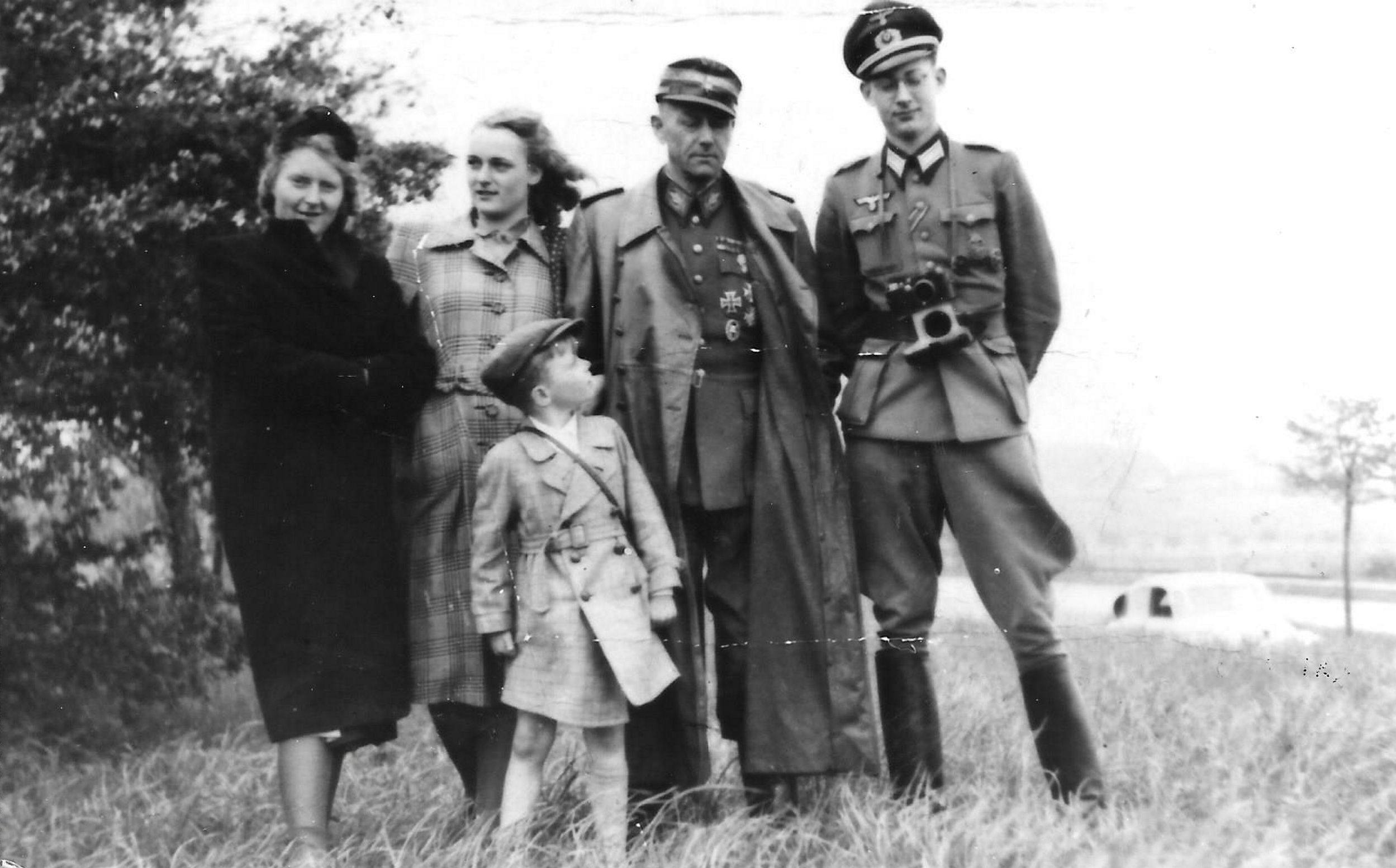 Family Lutze on 1 May 1943, the day of the accident, during their last break on their way to Berlin; the chauffeur took the picture. To the right: Leutnant Viktor Lutze Jr. in the uniform of the Heer decorated with Iron Cross, 2nd Class, Panzerkampfabzeichen, Riding Badge in Bronze and Wound Badge in Black from his combat time in a Panzer regiment.

After attending rectorate school (Rektoratsschule) in Ibbenbüren and high school (Gymnasium) in Rheine, Lutze joined the Reichspost on 11 April 1907. On 1 October 1912, he became Einjährig-Freiwilliger with the Infanterie-Regiment „Graf Bülow von Dennewitz“ (6. Westfälisches) Nr. 55 in Hörter in order to complete his mandatory military service. Unteroffizier der Reserve Lutze was called to duty in WWI and served with the Infanterie-Regiment Nr. 369, the Reserve-Infanterie-Regiment Nr. 15, where he was promoted to Leutnant der Reserve on 19 January 1917, and the 2. Garde-Reserve-Division. He served as a platoon leader and a company commander, was wounded four times, losing his left eye in combat.

1918 he was still living in Unna, from 1919 until 1929 he lived in Elberfeld (Westphalia). After discharge from the Reichswehr in August 1919 with the rank of Oberleutnant der Reserve, Lutze returned to his postal job at the Hauptpostamt (Beschäftigung im Post- und Telegraphendienst des Reiches), where he would stay until 31 December 1922, then became a salesman ("Schwelmer Messingwerk Albert Klein GmbH"). From 1921 until 1925, he was also co-operator of a metal foundry.[1]

He was founder and leader of the combat organization Kameradschaft Schill and joined the patriotic Deutschvölkischer Schutz- und Trutzbund as well as the Jungdeutscher Orden and worked together with his Kameradschaft (part of the Gruppe "Hauenstein") with Albert Leo Schlageter (de) in the armed resistance of the Belgian and French occupation of the Ruhr in 1923.

Lutze had joined the National Socialist German Workers Party (NSDAP) in Elberfeld on 21 February 1922 (he met Joseph Goebbels, Erich Koch and Karl Kaufmann) and the SA in 1923. He became an associate of Franz Pfeffer von Salomon (de), the first leader of the SA. Together, they determined the structure of the organisation. The NSDAP was banned from 9 November 1923 until 16 February 1925; Lutze unofficially re-enrolled on 25 February 1925, he officially re-entered the NSDAP on 22 March 1926 and was later granted the very low membership number of 84 “in Anerkennung seiner Verdienste” (in recognition of his meritorious service).

He became Gau-SA-Führer in 1925, Chef des "Gausturms Ruhr" in March 1926 under Gauleiter Franz von Pfeffer (de) and SA-Oberführer Ruhr as well as OSAF-Stellvertreter "Ruhr" and the deputy Gauleiter for the Ruhr in 1928. In 1930, now Führer der SA im Gau Hannover, he was elected to the Reichstag as a representative for Hannover-Braunschweig. Lutze rose through the ranks and by 1933 was a SA-Obergruppenführer. On 15 February 1933, he was appointed police president of the Prussian Province of Hanover and on 25 March 1933 became the Oberpräsident of the provincial government, serving until 28 March 1941. As police president he was also a member of the Academy for German Law (Akademie für Deutsches Recht).

After the Night of the Long Knives, Lutze succeeded Röhm as Stabschef der SA. Lutze's major tasks included overseeing a large reduction in the SA, a task welcomed by the SS and by the Reichswehr. On 30 June 1934, Hitler issued a twelve-point directive to Lutze to clean up and re-organize the SA. On 20 July 1934, Lutze also was appointed to Röhm's position as a Reichsleiter, the second highest political rank in the NSDAP. After the Anschluss, Lutze traveled to Austria to help reorganise the SA there. In February 1939, Lutze reviewed a parade of 20,000 Blackshirts in Rome and then set off for a tour of Italy's Libyan frontier with Tunisia.

Lutze died on 2 May 1943 (at 22.30 hours) during an operation at the Städtischen Krankenhaus, Potsdam, as a result of injuries sustained in an auto accident near Michendorf. This occurred at 14.30 hours on 1 May 1943 as Lutze, his wife, his 17-year-old daughter Inge, who was in the rear seat and killed instantly, oldest son Viktor Jr., who was on leave from the army, youngest son Adolf, who was injured, and chauffeur were returning on the Reichsautobahn from Bevergern to Berlin. Viktor Jr. was reportedly driving (speculation, not proven) and fell asleep at the wheel, the car then careening over an embankment, at in excess of 60 mph. Jill Halcomb, referencing a 3 May 1943 press report issued by Dr. Sommer, describes the accident as follows:

Suddenly, from the grass median several pedestrians stepped into the path of Lutze's speeding car. The driver slammed on the brakes, and apparently hit some of the pedestrians. The sudden braking caused the car to change direction and roll with great velocity down the highway for more than fifty meters. Lutze was thrown against the windshield of the car. At first Lutze was not thought to be seriously injured, but late in the day he grew increasingly worse; a bloodclot had formed in his lungs. He was rushed into surgery, but Lutze died soon after. His daughter, who had been riding in the rear seat of the car, died earlier, from her severe injuries.[2]

On 1 May 1943, at about 14.30 hours, the Stabschef's car on the Reichsautobahn, in the curve forming the junction of the railroad from Hannover with that from Leipzig, hit the median, raised and cemented at this point, which separates the two carriageways. The vehicle was thrown out of the lane and crashed down the high embankment. The Stabschef, who as usual was in the front on the right side of the driver, was pressed against the windshield in such an unfortunate way that, in addition to serious injuries to the right shoulder, he suffered bruises, several broken ribs and a concussion. The injuries, the serious nature of which became apparent immediately during the first examination after his admission to the hospital [in Potsdam], did not immediately threaten the life of the Stabschef. In the course of Sunday, the Stabschef's condition worsened due to increasing obstruction of breathing and circulation.[3]

In fact, the car accident was due to improper speed and senseless driving by Lutze's son. Of course, one cannot say that in public; one would completely destroy the son with that.

Despite intensive treatment by the renowned surgeon Prof. Dr. Ferdinand Sauerbruch (de), Dr. Otto Nordmann (the Lutz Family’s personal physician) and Dr. Werner Forßmann, clinic director of the städtischen Krankenhaus in Potsdam (a recipient, in 1956, of the Nobel Prize in Medicine for his work with cardiac catheterization), Lutze died at 20.30 hours due to a collapsed lung.[4] He given an elaborate state funeral (Staatsbegräbnis) in Berlin on 7 May 1943. Hitler warned all Reichsleiter and Gauleiter right after the funeral, that their drivers were to obey the speed limits and drive under them in some cases. This dressing down was a direct result of the accident.

Adolf Hitler's oration at the funeral ceremony of Viktor Lutze on 7 May 1943 in the Neue Reichskanzlei (de):

In a time when the war demands of our Volk the painful sacrifice of so many men, women, and regrettably even children, it takes a particularly heavy toll of blood from our National Socialist Party. There are members and sympathizers of our movement in all formations of the Heer, Kriegsmarine, Luftwaffe, and Waffen SS, and they fulfill their duty in an exemplary fashion. From the National Socialist Reichstag to the higher age groups of the Hitler Youth, the numbers of our movement’s dead represent a far higher percentage of the total than the average of the rest of the Volk. Alas, the war not only claims our men and women, it also brings truly saddening misfortune. It is particularly tragic for me to have to witness almost every year how the one or other irreplaceable fighter, coworker, and fellow designer of our new Reich is called to join the flock of those whom the poet of the National Socialist revolutionary song has accompany us in spirit. After the plane crash that took the unforgettable and irreplaceable party comrade Dr. Todt from us, it is a car crash this time that robs the SA of its chief of staff and me personally of a man who was always loyally attached to me. What can be said about the life story of this old National Socialist fighter has been said by the speaker before me, who was one of his oldest friends. I met the SA Fuhrer Viktor Lutze for the first time in Westphalia in 1925–1926. Since then I have become attached to him and his family not only through the common fight but also in a profound personal friendship. Nevertheless, on this day, I wish to commemorate primarily the man who unconditionally tied his own destiny to mine, who throughout the years was such a loyal and unshakable comrade in arms for me that, in a most bitter and painful hour, I felt I could entrust the leadership of my SA to him, as the most competent man. As one of my most staunch supporters, he fulfilled his mission and developed the SA into an instrument which was capable of carrying out all the great tasks which I set for it in the course of the year. My SA chief of staff, Viktor Lutze, was a soldier all his life. Because of this way of thinking, he had the fervent desire to be allowed to go to the front himself, a request which he made to me and which I was unable to grant. Nevertheless he has now died in a manner which puts a manly end to his life as a National Socialist. I want to express my profound gratitude to you, my dear Lutze, before the movement, the SA, and the entire German Volk, for your loyal fight. From the mighty struggle, in the midst of which we find ourselves today and to which you so richly contributed through your life’s work, will one day emerge the goal which once led us to each other and for which we fought over many decades in a sacred faith and with the greatest devotion: the Greater German Reich, secured by its own power against its enemies and supported by a true Volksgemeinschaft! In the annals of history, the name of Chief of Staff Viktor Lutze will live on eternally as one of the founders of the new Reich. My dear Mrs. Lutze, you have my heartfelt sympathy on the death of your husband and your child. I wish both your sons a speedy recovery. I believe that I cannot secure a worthier future significance for the highest medal that our party can award than by awarding it to the first pioneers of the new Reich and, thus, to the deceased. Through this, it is ennobled for all those who will one day have the honor of bearing it while alive.

Family seat (since 1938) and grave of the Lutzes was or is Gut Saltenhof (is now used as Hotel Saltenhof) in Bevergern near Hörstel Westphalia. 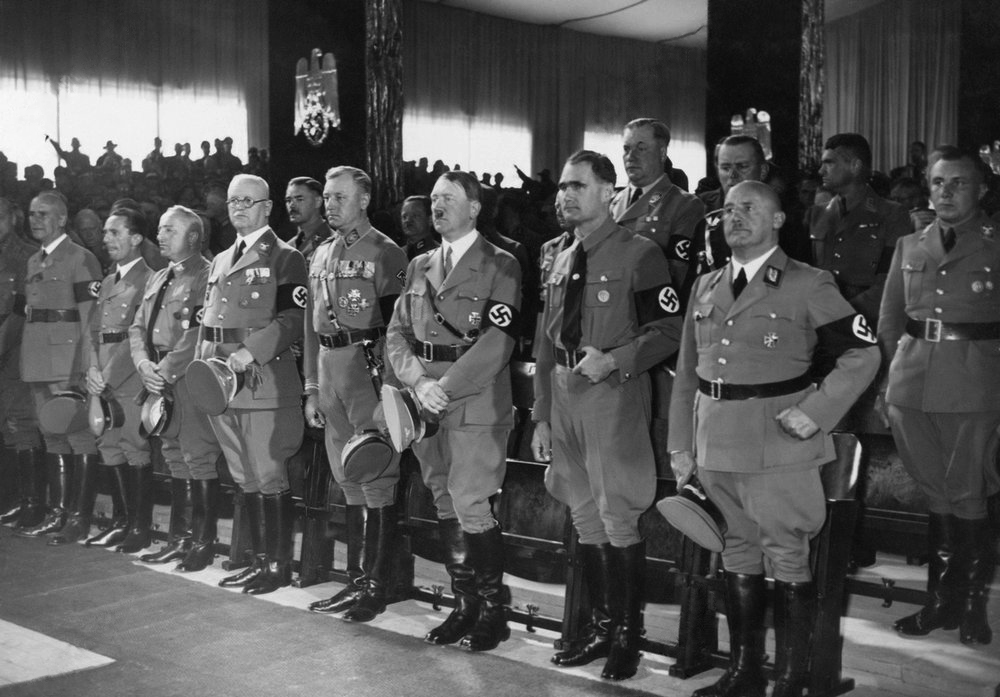 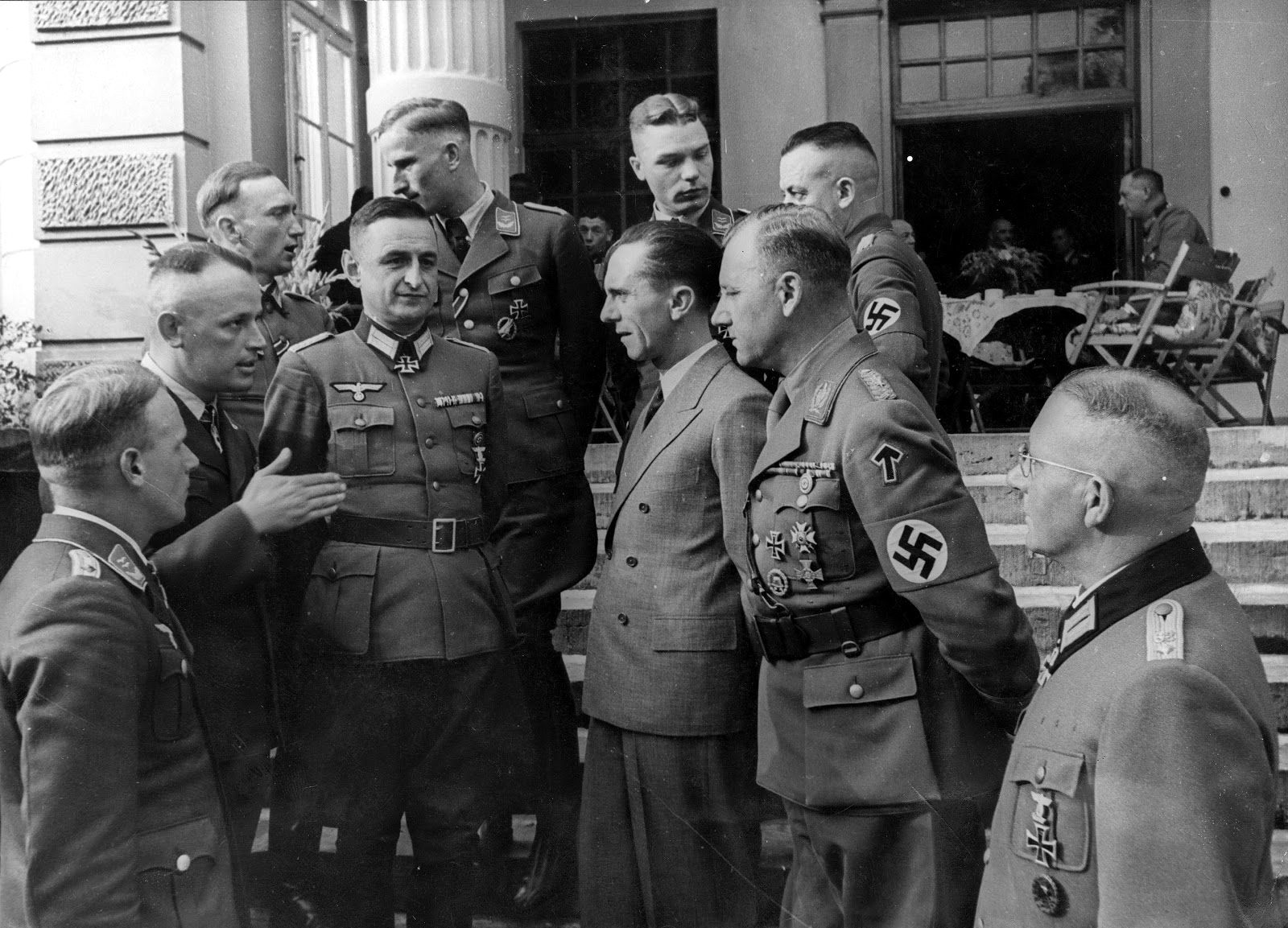