Potsdam is the capital city of the German federal state of Brandenburg and is part of the Metropolitan area of Berlin/Brandenburg. It is situated on the River Havel, 24 km southwest of Berlin city center.

Potsdam has several claims to national and international notability. In Germany, it has the status Windsor holds in England, as it was the country residence of the Prussian kings and their families until the end of 1918. Around the city there are a series of interconnected lakes and unique cultural landscapes, in particular the parks and palaces of Sanssouci, the largest World Heritage Site in Germany. The Potsdam Conference, the major post-war conference between the victorious Allies, was held at another palace here, the Cecilienhof. 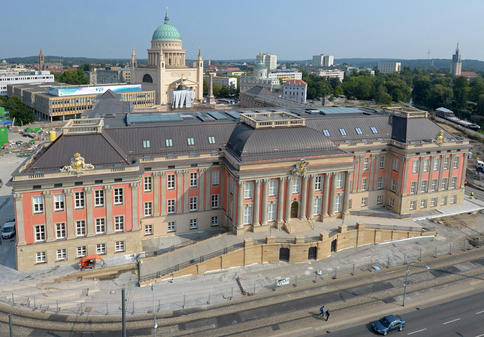 Putting the finishing touches to part of the rebuilt Stadtschloss at Potsdam.

The huge UFA studios at Neubabelsburg in 1940, the largest in Europe.

During the first fifteen years of the 21st century a major reconstruction of the famous city palace (Stadt Schloss), destroyed by Royal Air Force senseless and destructive bombing raids in the last days of World War II, has taken place. This masterpiece is open to tourists and for functions.

Babelsberg, in the south-eastern part of Potsdam, was a major movie production studio before 1945 with the largest sound stages in Europe. It has again enjoyed increased success as a major center of European film production since the fall of the Berlin Wall. The Filmstudio Babelsberg is historically significant as the oldest large-scale film studios in the world. The Deutsches Filmorchester Babelsberg frequently records soundtracks for domestic and foreign-based film productions.

Potsdam also developed into a centre of science in Germany from the 19th century. Today, there are three public colleges and more than 30 research institutes in the city.