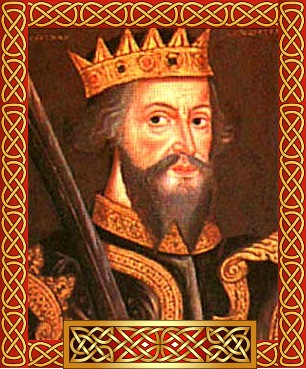 In support of his claims to the English crown, William invaded England in 1066, leading an army of Normans to victory over the Anglo-Saxon forces of the usurper Harold Godwinson (whose sister Eadgyth or Edith had married Edward the Confessor) at the Battle of Hastings, in what has become known as the Norman Conquest.

His reign brought Norman-French culture and the feudal system to England, which had an enormous impact on the subsequent course of England in the Middle Ages. A new, Norman, aristocracy was also introduced. In addition to these political changes, his reign also saw changes to English law, a programme of building and fortifications, and some changes and additions to the English language.

William was born in 1028 in Falaise Castle, Normandy (now Northern France), the illegitimate and only son of Robert I, Duke of Normandy by his mistress Herleva (or Arlette), who following Robert's death married Herluin de Burgh, Vicomte de Centeville (to whom she had a daughter and two sons).[1] She was the daughter of Fulbert, a rich tanner in Guilbray, Falaise, by his wife Doda. Fulbert is said to have been a Walloon, and was born in Chaumont, near Liéges. He had been made Chamberlain to the Duke of Normandy after his daughter became the Duke's mistress.[2]

William was well-connected paternally. His uncle Richard, who had preceded his father as Duke of Normandy, was married to Princess Adelaide of France. His aunt Eleanor was married to two successive Counts of Flanders. His grand-aunt Emma of Normandy, was firstly the wife of the Anglo-Saxon King Ethelred the Unready, and after his death in 1016, of the Danish King Canute the Great (d.1035). This meant that William's father Robert was a first cousin of Edward the Confessor, the last Anglo-Saxon King of England, who died on January 6, 1066.

William's father died in July 1035 at Nicaea, Asia Minor, returning from a pilgrimage to Jerusalem, and William succeeded him as Duke of Normandy at the young age of seven and was known as Duke William II of Normandy (French: Guillaume II, duc de Normandie). Plots to usurp his place cost William three guardians, though not Alan Count of Brittany, who was a later guardian. William was knighted by King Henry I of France at the age of 15. By the time he turned 19 he was successfully dealing with threats of rebellion and invasion. With the assistance of Henry, William finally secured control of Normandy by defeating the rebel Danish-Norman barons at Caen in the Battle of Val-ès-Dunes in 1047.

Against the wishes of Pope Leo IX, William married his first cousin Matilda of Flanders in 1053 in the Cathedral of Notre Dame at Eu, Normandy (in Seine-Maritime). At the time, William was aged about 26 and Matilda aged 22. Their marriage produced four sons and six daughters. In repentance for what was a consanguine marriage, William founded St-Stephen's church (l'Abbaye-aux-Hommes) and Matilda founded Sainte-Trinité church (Abbaye aux Dames).

William believed that once Edward the Confessor was dead, he would be the rightful king of England. It is probable that Edward had promised him the throne, and it is known that in 1064, Harold Godwinson had pledged his allegiance to William while he was his guest after being shipwrecked on the coast of Ponthieu.

Upon the death of Edward the Confessor in January 1066, Harold Godwinson was crowned King of England. Harold raised a large fleet of ships and mobilized a force of militia. He then arranged these around the coasts, anticipating attack from several directions. During this time, William submitted his claim to the English throne to Pope Alexander II, who sent him a consecrated banner in support, and openly began assembling an army in Normandy, consisting of his own army, French mercenaries, and numerous foreign knights anticipating plunder or English land.

Once the harvest season arrived, Harold ordered the militia-men home due to falling morale and supplies, and consolidated his ships in the port of London, leaving the channel unguarded. Then came the news that Harald III of Norway had landed ten miles from York with Tostig, Harold's notorious younger brother, which forced Harold and his army to head north. After a victory against the forces of Earls Edwin of Mercia and Morcar of Northumbria at the Battle of Fulford, Harald and Tostig were defeated by Harold's army at the Battle of Stamford Bridge, Tostig falling in battle.

Three days after this battle, William Duke of Normandy arrived with his army in Pevensey Bay, Sussex, and then moved to Hastings, a few miles to the East, where he built a fort. On October 13, he received news that an army led by Harold Godwinson was approaching from London, and at dawn the next day, William left the fort with his army and advanced towards the English army, who had taken a defensive position atop a ridge around seven miles from Hastings. The Battle of Hastings lasted all day on October 14th. At dusk, the English army made their last stand. By that night, the battle was over, and the English army was defeated. Harold and two of his brothers, Gyrth and Leofwine Godwinson, had fallen in battle.[3]

William's next target was London, which he approached via Dover and Canterbury. However, London was under the control of supporters of Edgar Ætheling.[4] Despite William's advance guard beating back a sortie on London Bridge, William marched westward, crossing the Thames at Wallingford and forcing the surrender of Archbishop Stigand, one of Prince Edgar's leading supporters. When William reached Berkhamstead a few days later, the city authorities in London had surrendered, and William was crowned King of England on Christmas day, December 25, 1066.

Although the south of England submitted quickly to Norman rule, resistance continued in the North for six more years until 1072. Harold's illegitimate sons attempted an invasion of the south-west peninsula. Uprisings occurred in the Welsh Marches and at Stafford. Separate attempts at invasion by the Danes and the Scots also occurred. William's defeat of all these led to what became known as the harrying of the North, in which Northumbria was laid waste as revenge and to deny his enemies its resources. The last serious resistance came with the Revolt of the Earls in 1075.

Territory of William I

William initiated many major changes. In 1085, in order to ascertain the extent of his new dominions and maximize taxation, William commissioned the compilation of Domesday Book, a survey of England's productive capacity similar to a modern census. He also ordered many castles, keeps, and mottes, among them the Tower of London, to be built across England to ensure that the rebellions by the English people or his own followers would not succeed. His conquest also led to Norman (and French) replacing English as the language of the ruling classes for nearly 300 years.

William is said to have eliminated the native aristocracy in as little as four years. While many fled to Flanders and Scotland, others may have been sold into slavery, as their properties and titles were given to Normans. By 1070, the indigenous nobility had ceased to be an integral part of the English landscape, and by 1086, it maintained control of just 8 percent of its original land-holdings.

William died at the age of 59, at the Convent of St Gervais, near Rouen, France, on 9 September 1087 from abdominal injuries received from his saddle pommel when he fell off a horse at the Siege of Mantes. William was buried in the church of St. Stephen in Caen, Normandy.

According to some sources, a fire broke out during the funeral; the original owner of the land on which the church was built claimed he had not been paid yet, demanding 60 shillings, which William's son Henry (later Henry I King of England) had to pay on the spot; and, in a most unregal postmortem, William's now corpulent body would not fit in the stone sarcophagus.

William's grave is currently marked by a marble slab with a Latin inscription, the slab dates from the early 19th century. The grave was defiled twice, once during the French Wars of Religion, when his bones were scattered across the town of Caen and again during the French Revolution. Following those events, only William's left femur remains in the tomb.

William was succeeded in 1087 as King of England by his younger son William II; and as Duke of Normandy by his elder son Robert 'Curthose', which led to the Rebellion of 1088. His youngest son Henry also became King after William 'Rufus' died without issue. 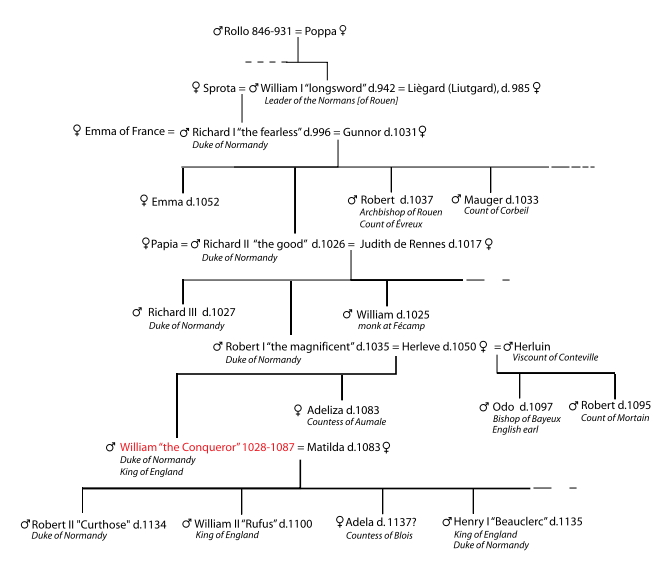 Every English monarch down to Queen Elizabeth II is a direct descendant of William the Conqueror.