From Metapedia
(Redirected from Viking)
Jump to: navigation, search 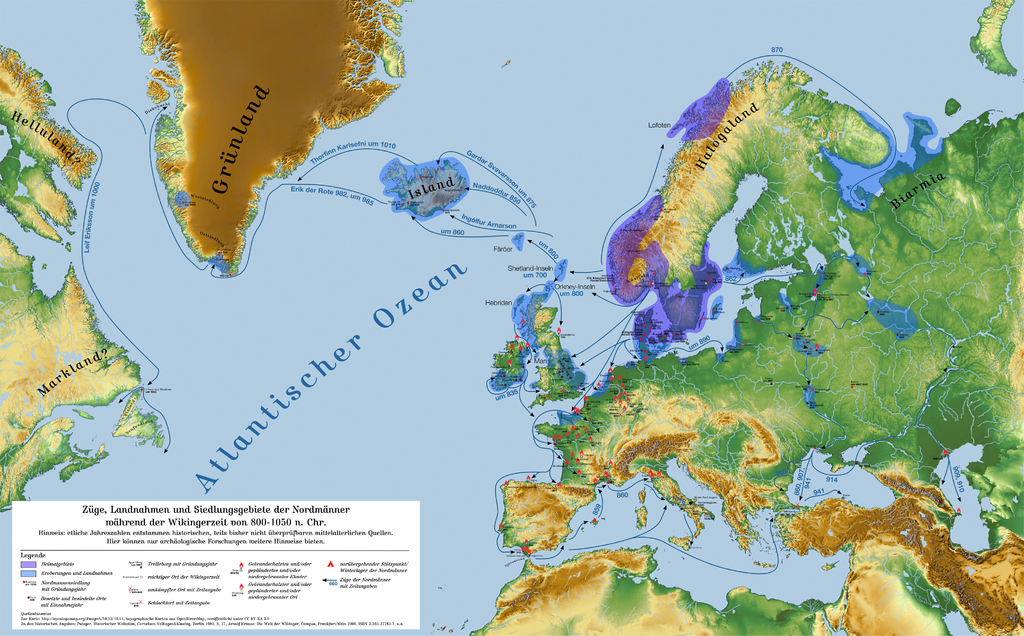 The Vikings (German: Wikinger) were seafaring northern Germanic people, a member of the Norse (Scandinavian) seafaring traders and warriors, who raided and colonized wide areas of Europe from the late 8th to the 11th century. Similar people on the east shore of Baltic Sea such as Estonians and Curonians were too called Vikings.[1] Recently, there have been politically correct,outrageous attempts to depict the Vikings as multicultural, as an argument against supposed relationships between Vikings and "White supremacy".[2]

These Norsemen used their famed longships to travel as far east as Constantinople and the Volga River in Russia, and as far west as Newfoundland. This period of Viking expansion is commonly referred to as the Viking Age of Scandinavian History.[3] Notably they had explored North America ("Vinland") and founded Rus.

Viking expansion could also have originated as a means of resistance to forced Christianisation, in particular Charlemagne’s persecutions against all the Pagan people in Germania, who would’ve had to accept “conversion, or the massacre." Following a period of thriving trade and settlement, cultural impulses flowed from the rest of Europe to affect Viking dominance. Christianity had an early and growing presence in Scandinavia, and with the rise of centralized authority and the development of more robust coastal defense systems, Viking raids became more risky and less profitable.

Our knowledge about arms and armor of the Viking age is based on relatively sparse archaeological finds, pictorial representation, and to some extent on the accounts in the Norse sagas and Norse laws recorded in the 13th century.

According to custom, all free Norse men were required to own weapons, as well as permitted to carry them at all times. These arms were also indicative of a Viking's social status. A wealthy Viking would have a complete ensemble of a helmet, shield, chainmail shirt, and animal-skin coat, among various other armaments. A lesser off man, however, could only afford a single weapon, and perhaps a shield.

The spear (Ger) and shield were the most basic armaments of the Viking warrior; most would probably also wear a knife of some description, commonly of the seax type. As an alternative, or perhaps in addition, to the spear a warrior might carry a bow or axe. The wealthiest Vikings would have worn a sword in addition to his primary arms and have had access to body armor, such as a helmet and a mail hauberk.

Early modern publications, dealing with what we now call Viking culture, appeared in the 16th century, e.g. Historia de gentibus septentrionalibus (Olaus Magnus, 1555), and the first edition of the 13th century Gesta Danorum of Saxo Grammaticus in 1514. The pace of publication increased during the 17th century with Latin translations of the Edda (notably Peder Resen's Edda Islandorum of 1665).