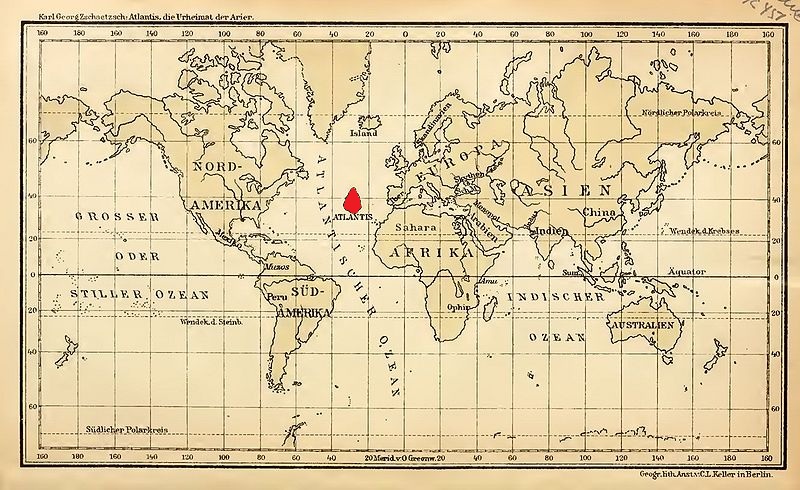 A map of the world showing the Donnellian location hypothesis of Atlantis.[1] The here-given map is slightly adapted from the original, as Atlantis has been colored red.

Atlantis is the name of an island appearing in the writings of Plato. Ancient Athens was supposedly able to repel attacks by Atlantis. The story concludes with Atlantis falling out of favor with the gods and submerging into the Atlantic Ocean.

The story is generally considered to be an invention by Plato, in order to illustrate his concept of an ideal state, but it has also been argued that he may have been inspired by earlier myths. Various locations and inspirations for Atlantis have therefore been proposed. Atlantis has also inspired later fictional and esoteric writings.

Plato describes Atlantis as having been circular in design, and an island "larger [or greater]" than Libya and Asia combined". It is described as sitting in the Atlantic, derived from the name Atlas, a son of Poseidon. The geneaology and foundation myth of the Atlanteans is discussed in Critias. The Atlanteans are described as having an advanced settlement, who conquered surrounding peoples but who were "halted" by the prehistoric Athenians. The island Atlantis is described as having later been destroyed "in a single day and night of misfortune" through a violent earthquake or flood 9000 years before Solon. Plato summarises as thus:

"...starting from a distant point in the Atlantic ocean, was insolently advancing to attack the whole of Europe, and Asia to boot. For the ocean there was at that time navigable; for in front of the mouth which you Greeks call, as you say, 'the pillars of Heracles,' there lay an island which was larger than Libya and Asia together; and it was possible for the travelers of that time to cross from it to the other islands, and from the islands to the whole of the continent over against them which encompasses that veritable ocean. For all that we have here, lying within the mouth of which we speak, is evidently a haven having a narrow entrance; but that yonder is a real ocean, and the land surrounding it may most rightly be called, in the fullest and truest sense, a continent. Now in this island of Atlantis there existed a confederation of kings, of great and marvelous power, which held sway over all the island, and over many other islands also and parts of the continent."