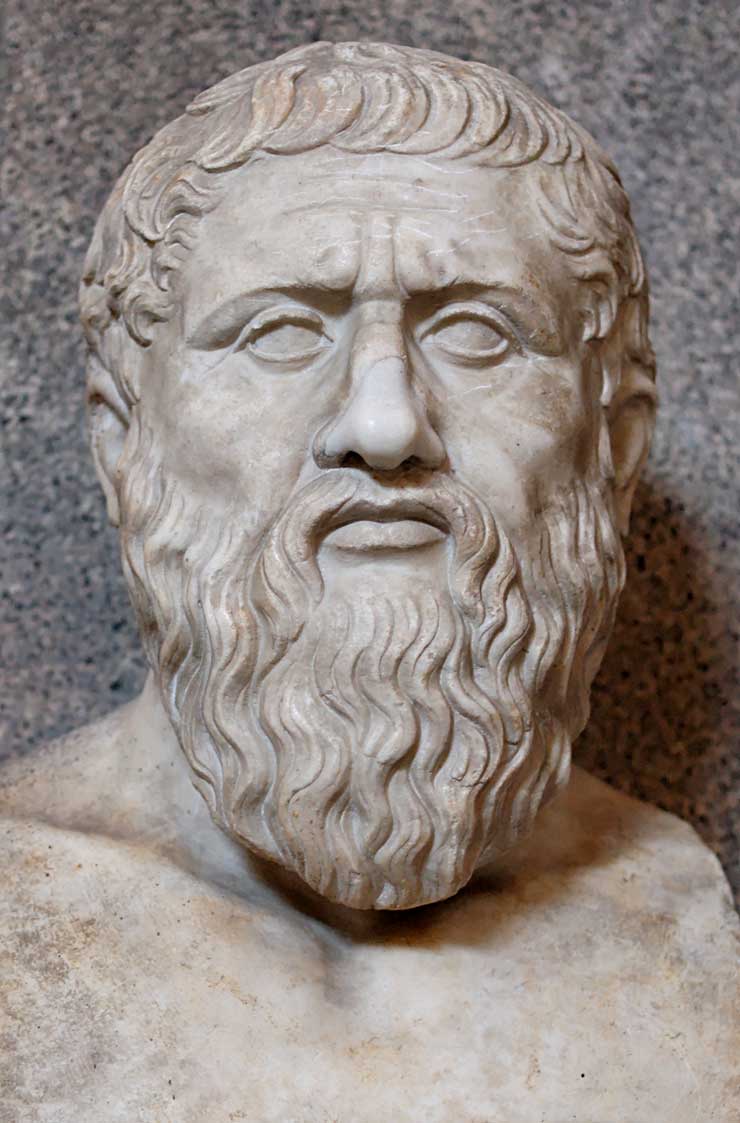 Plato, the great Athenian philosopher, was born c. 427 B. c., and lived to the age of eighty. His literary activity may be roughly said to have extended over the first half of the 4th century B.C. His father's name was Ariston, said to have been a descendant of Codrus; and his mother's family, which claimed descent from Solon, included Critias, one of the thirty tyrants, and other well-known Athenians of the early 4th century B.C. That throughout his early manhood he was the devoted friend of Socrates, that in middle life he taught those who resorted to him in the grove named Academus, near the Cephisus, and there founded the first great philosophical school, that (with alleged interruptions) he continued to preside over the Academy until his death, are matters of established fact.

It is said by Aristotle that he was at one time intimate with Cratylus the Heraclitean. Beyond this we have no authentic record of his outward life. That his name was at first Aristocles, and was changed to Plato because of the breadth of his shoulders or of his style or of his forehead, that he wrestled well,' that he wrote poetry, which he burnt on hearing Socrates, fought in three great battles, that he had a thin voice, that (as is told of other Greek philosophers) he travelled to Cyrene and conversed with priests in Egypt, are statements of Diogenes Laertius, which rest on more or less uncertain tradition. The express assertion - which this author attributes to Hermodorus - that after the death of Socrates Plato and other Socratics took refuge with Euclides in Megara, has a somewhat stronger claim to authenticity. But the fact cannot be regarded as certain, still less the elaborate inferences which have been drawn from it. The romantic legend of Plato's journeys to Sicily, and of his relations there with the younger Dionysius and the princely but unfortunate Dion, had obtained some degree. Some epigrams in the Anthology are attributed to him.

The later years of the Peloponnesian War witnessed much mental disturbance and restlessness at Athens. More than at any time since the age of Cleisthenes, the city was divided and a man's foes were often men Anteced ent ' 'Conditi ons. of his own tribe or deme. Contention in the law courts and rivalries in the assembly had for many men a more absorbing interest than questions of peace and war. Hereditary traditions had relaxed their hold, and political principles were not yet formulated. Yet there was not less scope on this account for personal ambition, while the progress of democracy, the necessity of conciliating the people, and the apportionment of public offices by lot had a distracting and, to reflecting person s, often a discouraging effect. For those amongst whom Plato was brought up this effect was aggravated by the sequel of the oligarchical revolution, while, on the other hand, for some years after the restoration of the democracy, a new stimulus had been imparted, which, though of short duration, was universally felt.

These events appear in two ways to have encouraged the diffusion of ideas. The ambitious seem to have welcomed them as a means of influence, while those who turned from public life were the more stimulated to 'speculative disputation. However this may have been, it is manifest that before the beginning of the 4th century B.C. the intellectual atmosphere was already charged with a new force, which although essentially one may be differently described, according to the mode of its development, as rhetorical and theoretical and " sophistical." This last word indicates the channel through which the current influences were mostly derived.

A new want, in the shape both of interested and of disinterested curiosity, had insensibly created a new profession. Men of various fatherlands, some native Athenians, but more from other parts of Hellas, 4 had set themselves to supplement the deficiencies of ordinary education, and to train men for the requirements of civic life. More or less consciously they based their teachings on the philosophical dogmas of an earlier time, when the speculations of Xenophanes, Heraclitus or Parmenides had interested only a few " wise men." Those great thoughts were now to be expounded, so that " even cobblers might understand." The self-appointed teachers found a rich field and abundant harvest among the wealthier youth, to the chagrin of the old-fashioned Athenian, who sighed with Aristophanes for the good old days when men knew less and listened to their elders and obeyed the customs of their fathers. And such distrust was not wholly unfounded. For, amidst much that was graceful and improving, these novel questionings had an influence that, besides being unsettling, was aimless and unreal.

A later criticism may discern in them the two great tendencies of naturalism and humanism. But it may be doubted if the sophist was himself aware of the direction of his own thoughts. For, although Prodicus or Hippias could debate a thesis and moralize with effect, they do not appear to have been capable of speculative reasoning. What passed for such was often either verbal quibbling or the pushing to an extreme of some isolated abstract notion. That prudens quaestio which is dimidium scientiae had not yet been put. And yet the hour for putting it concerning human life was fully come. For the sea on which men were drifting was profoundly troubled, and would not sink back into its former calm. Conservative reaction was not less hopeless than the dreams of theorists were mischievously wild. In random talk, with gay, irresponsible energy, the youth were debating problems which have exercised great minds in Europe through all after time.

Part of this article consists of modified text from the Encyclopædia Britannica Eleventh Edition of 1911, which is no longer restricted by copyright.
Retrieved from "http://en.metapedia.org/m/index.php?title=Plato&oldid=479668"
Categories: