From Metapedia
(Redirected from SS-Julleuchter)
Jump to: navigation, search 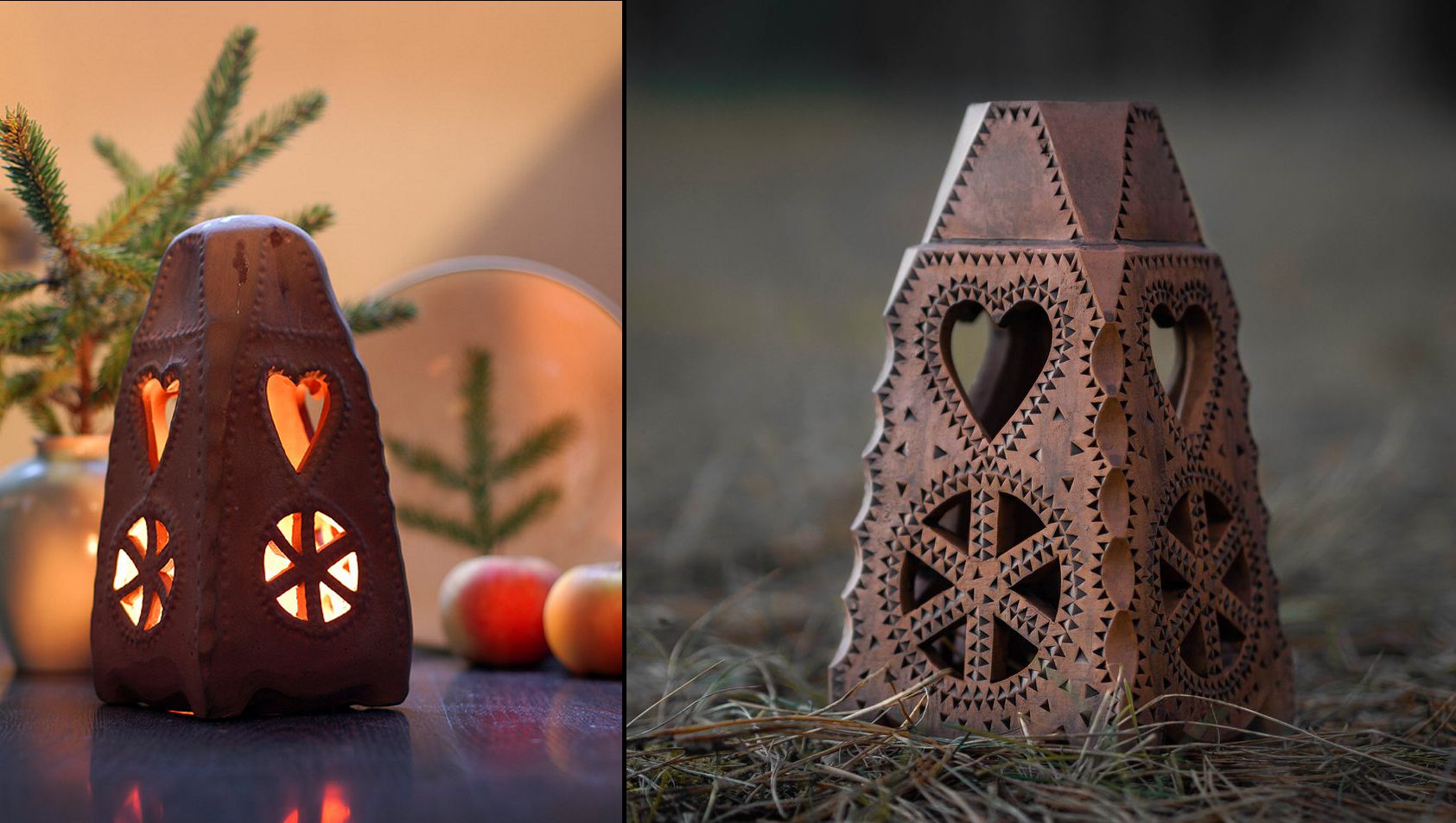 and the Waffen-SS. Of highest quality, it was only to be used from New Year's Eve into New Year's Day.

Julleuchter or Jul-Leuchter (yule Lantern or yule candlestick), rarely also Turmleuchter ("tower lantern") is a Nordic relic and an important symbol of Germanic mysticism. It has an incised heart shape and below a Hagal rune. Due to its name, it is often used incorrectly only during the Yule (Julzeit) or Christmas season. But the Julleuter actually shows something completely different. It represents the path of light. So between 21 June (summer solstice) and 21 Decemeber (winter solstice) the candle can be lit on the inside of the lantern. It represents the waning sun and on 21 Dezember, light triumphs over the darkness after the winter solstice, now the candle can be lit on top of the candlestick and left there to shine victoriously until 21 June. It can also be used during the Twelvetide (German: Rauhnächte), as some sources claim. 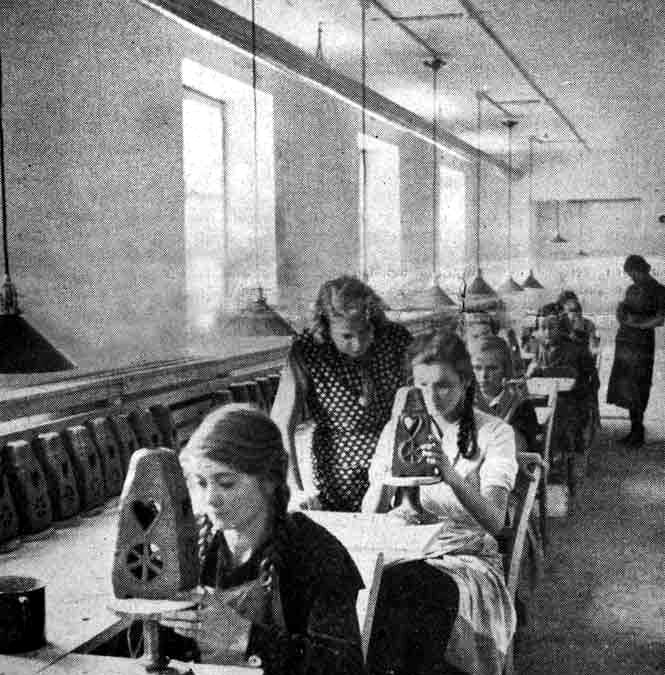 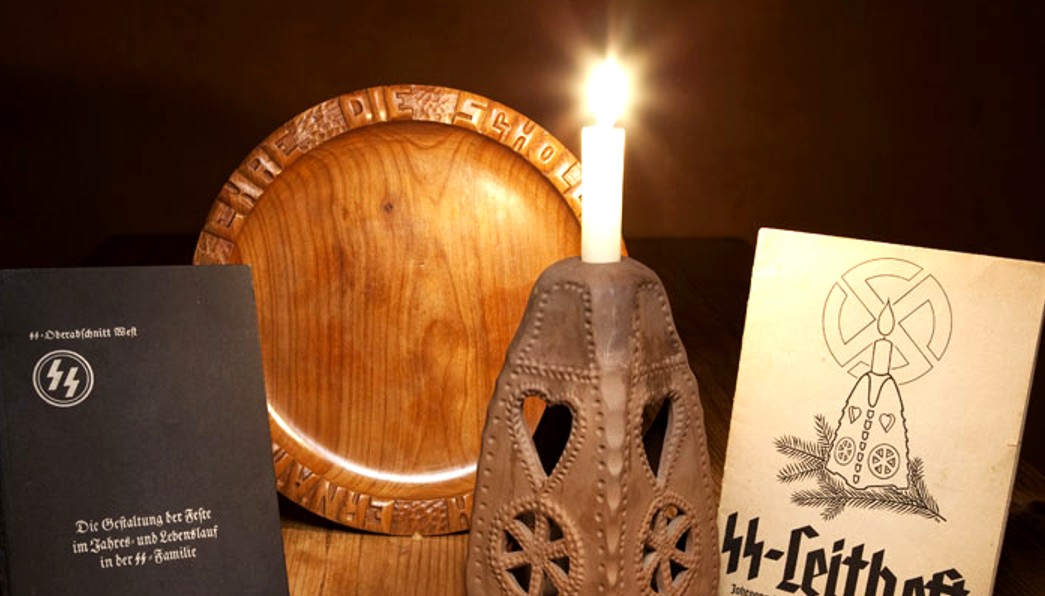 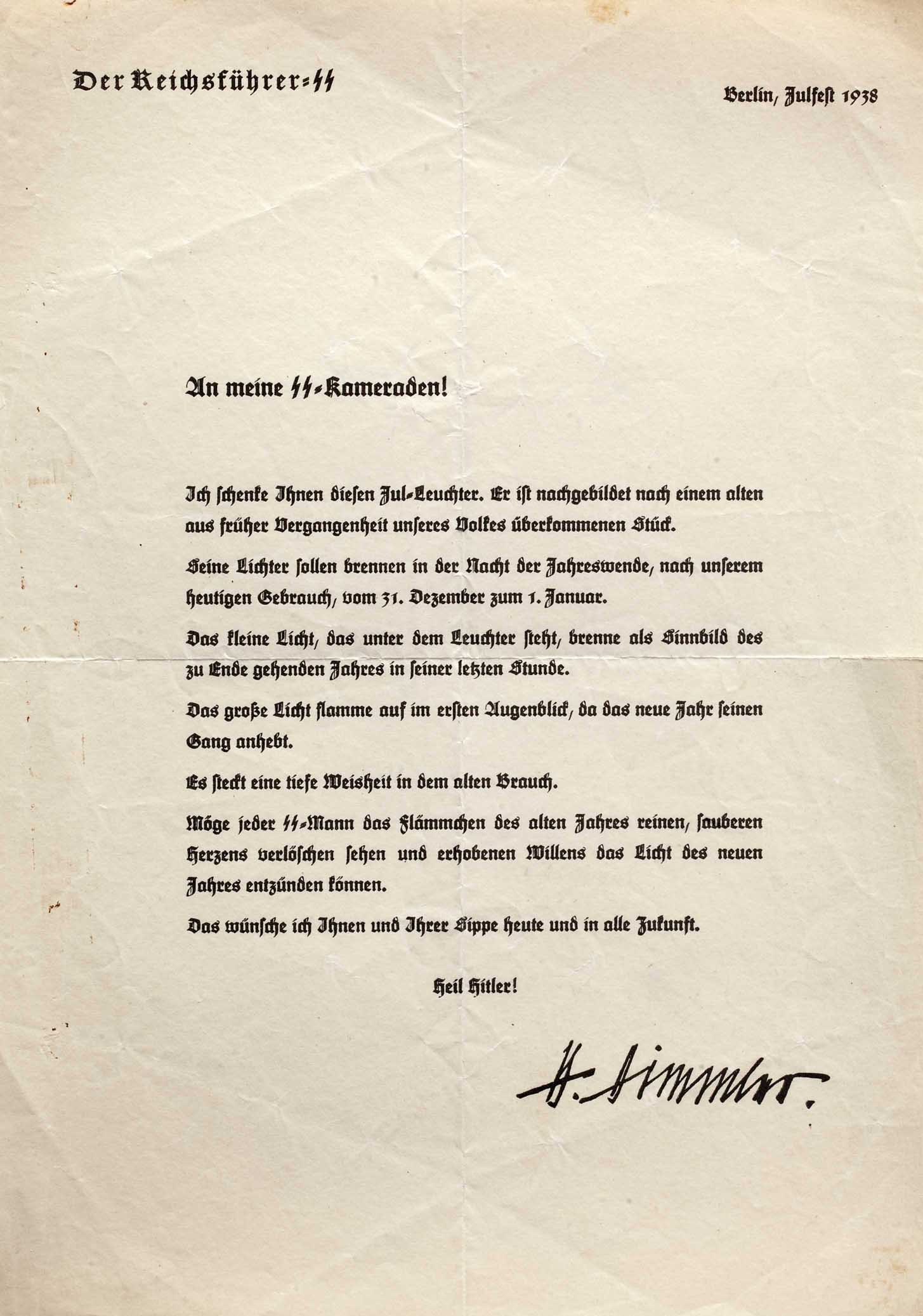 Although many sources quote the Swedish magazine "Runa" (1888), the Julleuchter was already described in the Old Frisian Ura-Linda-Chronik (Thet Oera Linda Bok; Oera Linda Book) from 1860. In 1872, Jan Gerhardus Ottema (1804–1879), a prominent member of the Frisian Society for History and Culture, published a Dutch translation. Ottema believed it to be written in authentic Old Frisian. The book was subsequently translated into English by William Sandbach in 1876, and published by Trübner & Co. of London. Some consider the document to be a hoax or forgery, because not from the period of Germania, but all agree, it was written no later than the early 18th century, making the Julleuchter references older than those in "Runa". The book was translated in German by Dutch philologist Herman Wirth.

A 1936 issue of magazine "Germanien" stated that the millennium old lantern had been used as a memento of the "Year of the Great Migrations" (German: Große Völkerwanderung) of the Germanic people of the north and as the small light of humanity under the stars of the night sky. When used during the two Solstice periods of the year, this is a symbol of the victory of light over the darkness, and also as a token of eternal circulation. The Julleuchter stands for an inseparable community, its conscience and attitude, and that it was used as a symbol of never ending sunlight. Further, the magazine stated that when the Julleuchter was used during the holiday of Yule, twelve candles are used. One is used each night symbolizing the twelve months, until the 31 of December when the "July Moon shines." On that night a thirteenth candle is used for the new coming month of January. The candles always burn below but on the last night, the candle is again transferred upward – this is the sun, which is spilled in order to return to the earth from the gloom of another peace.[1]

The Julleuchter (Yule Lantern) is used to celebrate the Vernal Equinox, Mid-Summer, Autumnal Equinox, and Mid-Winter. Mid-Summer has been Christianized as the feast of Saint John the Baptist and Mid-Winter has been Christianized as the birth of Jesus Christ. Julleuchters became unpopular as Christianity spread and were only used in small communities that held on to their pagan beliefs. Symbolized in the form of the " Midnight Mountain", this item follows the ancient customs from East Frisia, to Scandinavia . This small light has been used as a memento of the "Year of the Great Migrations" of the people of the north, & as the small light of humanity under the stars of the night sky. When used during the 2 Solstice periods of the year, this is a symbol of the victory of Light over the Darkness, and also as a token of Eternal Circulation. The Norse Rune of Faith and a heart that represents the spirit or soul are visible on all four sides. It stands for an inseparable community, its conscious and attitude. It is used as a symbol of the sunlight never going out. During the Vernal Equinox, the holiday of Ostary (Ostara-Fest) which symbolizes the revival of the sun, a candle is lit in the lower part of the Julleuchter and is then transferred to the upper position. During the Summer Solstice (Mittsommer-Feier) the holiday that symbolizes the sun, which entered the total force (god of Baldur). A candle only burns at the top of the Julleuchter. During the Autumnal Equinox or Autumnal Ting (Herbst-Thing) the holiday which symbolizes the beginning of niskhozhdeniya of the sun in the worlds of other. A candle is lit at the top of the Julleuchter and transferred downward. During the Winter Equinox, the holiday of Yol, what is now known as The 12 Days of Christmas, twelve candles are used. One is used each night symbolizing the twelve months, until the 31 of December when the "July Moon shines." On that night a thirteenth candle is used for the new coming month of January. The candles always burn below but on the last night, the candle is again transferred upward- this is the sun, which is spilled in order to return to the earth from the gloom of another peace. The Julleuchter was first mentioned in the Swedish magazine "Runa" in 1888. It described a Julleuchter from the 16th Century that is today in a museum in Holland. In 1933, an article about the Julleuchter was published in Germany which helped popularize it once again. This article described a Julleuchter in the Norwegian royal museum in Stockholm.

Starting in 1935, SS-Julleuchter or Julleuchter der SS were first presented to SS officers, later also to deserving SS men and to the widows of SS men who had fallen (⚔) in the war, based on a Swedish find by Heinrich Himmler. The Julleuchter were made in the porcelain and ceramics factory Allach (Porzellan-Manufaktur Allach), which was founded 1935 by the German artists Franz Nagy, Theodor Kärner and Karl Diebitsch in Allach (Lindenstraße 8), since 1 December 1938 a part of Munich. In 1936, the manufactory was purchased by Heinrich Himmler and the SS-Hauptamt. This led to a concentration of the best artists in this factory, who made high-quality porcelain objects in a very short time.

In a 1936 memorandum, Himmler, the Head of the S.S., set forth a list of approved holidays based on pagan and political precedents and meant to wean Elite Forces members from their reliance on Christian festivities. The list included April 20, May Day, the Summer Solstice, and the November 9 Beer Hall Putsch anniversary. Climaxing the year in the Elite Forces Commander's scheme was the Winter Solstice, or Yuletide, an event that brought S.S. folk together at candlelit banquet tables and around raging bonfires that harked back to German tribal rites. [...] the [...] Porzellan Manufaktur Allach was created in Munich u[...]. High-ranking artists were locked into contract. The program of the factory included over 240 porcelain and ceramic models. Due to a rapid expansion of the enterprise, the factory was not able to meet production, so in October 1937 a part of production was shifted to Dachau. Originally the Allach factory manufactured only art ceramic, like plates, jugs and vases, but in the war years they also produced simple utensils like ointment containers and cafeteria table-ware. Special occasion gift items for loyal S.S. supporters were also made and given away at dinner parties and other events. The quality of the porcelain pieces produced in Allach is extraordinary, and due to very limited production numbers and years of operation, Allach pieces today demand very high prices. Allach porcelain made a variety of candle holders ranging from elaborate gilded baroque candelabras, to the most basic plain white porcelain single candle holder. Production numbers for most candle holders were above average for other Allach items, indicating popularity and interest among the German people. The varying styles and cost of the candle holders produced at Allach allowed most Germans of every class to own them. The Allach Julleuchter was unique in that it was made as presentation piece for S.S. officers to celebrate the winter solstice. It was later given to all S.S. members on the same occasion. Made of unglazed stoneware, the Julleuchter was decorated with early pagan Germanic symbols. Production numbers in 1939 alone were a staggering 52,635, certainly a record for any single item produced at the Porzellan-Manufaktur Allach.[2]

A supplement writing signed by Heinrich Himmler explained the gift of honor:

"I present you this Julleuchter. It is modeled after an old piece handed down from our people's past. Its lights are to burn on the night of the turn of the year, as we use it today, from 31 December to 1 January. The small light that sits under the candlestick burns in its last hour as a symbol of the year that is coming to an end. The large light flares up at the first moment as the new year begins its march. There is deep wisdom in the old custom. May every SS man see the small flame of the old year go out with a pure, clean heart and be able to ignite the light of the new year with an uplifted will. I wish that to you and your family [clan] today and in all future.”

The SS member was instructed to set up a shrine that included a Julleuchter in the corner of one room of his household:

"The house of the SS man ought to know because one of its corners is intended for the celebration of his family. In it is to summarize those things that remind people of his higher obligations. [...] On the chest, in the corner and shall include heirlooms, are all year round and the Julleuchter the Julteller (pewter or earthenware) of individual family members who use them on all holidays of the year, but also on birthdays, weddings and deaths. [...] The Wall adorns the image of the Führer and Reichsführer SS, also pedigree and family photos, mementos of war and times of struggle. The large

runes will not be absent. The Jul- and SS-corner is the measuring rod of the extent that the SS man and his wife practice the customs of the SS."[3]