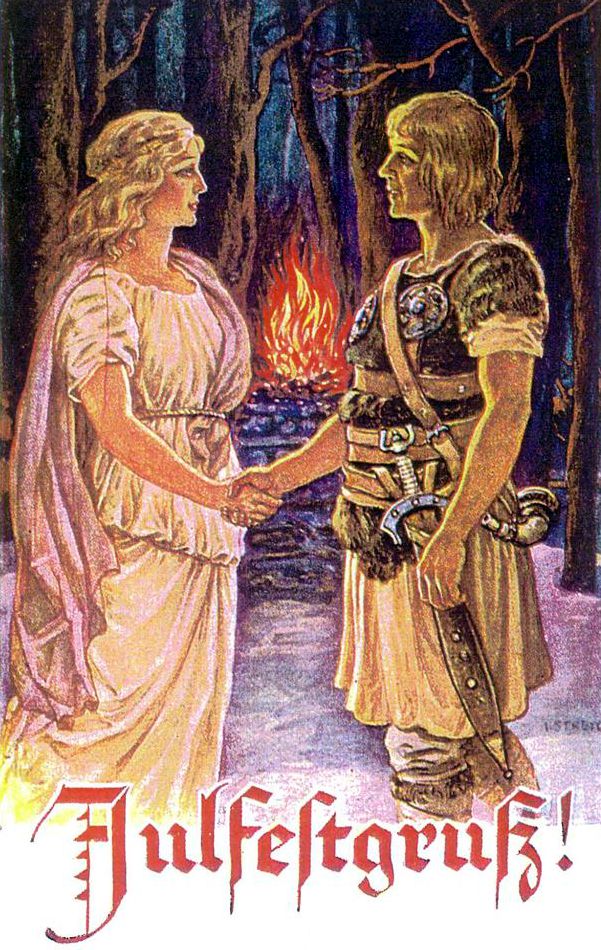 Yule, also Jul or Jol, is the season of the winter solstice and Christmas. This word is chiefly used alone as an archaism or in poetry or poetical language, but is more common in combination, as in "yule-tide," "yulelog," &c. The Anglo-Saxon word appears in various forms, e.g. gala, iula, geol, gehhol, gehhel; cognate forms are Icel, jol; Dan. juul; Swed. jul. It was the name of two months of the year, December and January, the one the "former yule" (se aerra gala), the other the "after yule" (se aeftera gala), as coming before and after the winter solstice. According to A. Fick in proper meaning is noise, clamour, the season being one of rejoicing at the turning of the year among Germanic peoples before Christian times.

Yule comes from the old Norse jól and Old English géohol which was a season of hunting after the harvest was done. This fell in what we now call December so it eventually became associated with the Christmas Holiday. The first recorded use of the noun Yuletide, according to Wikipedia, was in 1475. The Yuletide season lasted from the end of November to the beginning weeks of January but the feast of Yule lasted three days over the Winter Solstice and marked the beginning of the new year. Yule was similar to Passover in Jerusalem before the Temple was destroyed. For Passover, the Jewish people would bring lambs, birds, and other animals for sacrifice. The blood would be offered on the altar and the meat cooked for the Passover meal. According to Norse historian and saga translator Lee M. Hollander every nine years Germanic farmers were compelled to come to the temple hof and make sacrifices and feasts over a prescribed period of time during yuletide. Yule was celebrated in Germanic countries with animal sacrifices where the sanctified blood was then used to paint the altar, temple posts, and the supplicant himself as part of the ritual. He was literally "washed in the blood". This was followed by feasts, storytelling and drinking around a large communal fire. In Grettis Saga Yule is described as a time of "greatest mirth and joy among men." This was also a time of oath-making. Business deals and marriages were brokered. The godi (priest, judge, chieftan) who was in charge of the hof wore a great gold ring around his neck. The people who would swear an oath, laid their hands on this ring and made their pledge in front of witnesses. Just such a ring was found at an excavation of an 11th century chieftain's residence on the outskirts of Tissø, Denmark. The most famous hof was uncovered at Uppsala, Sweden. The same temple is mention in the Heimskringla, by Snorri Sturluson and in Adam of Bremen's 11th century travel journal. It is described as housing three statues on three thrones, one for Thor, one for Wodan (Odin) and one for Fricco (Freyr). There was a great gold chain around the building, draping from the gables that flashed in the sunlight from afar. Other traveler's accounts also mention this chain. In the Ynglinga Saga by Snorri Sturluson, Uppsala was the site where King Domalde was sacrificed in the Autumn after three years of famine, for the sake of his people, and prosperity returned. The first day of Yule falls on the last day of Autumn. In the Saga of Hákon the Good, Haakon I of Norway changed the date of Yule from the days surrounding Midwinter to the date that Christmas was observed in the rest of Europe. Though the sacrifices and religious practices of Yule were abandoned, many Yuletide customs continued.[1]