From Metapedia
(Redirected from Gunter Grass)
Jump to: navigation, search 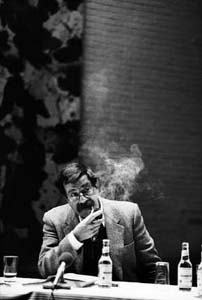 Grass was born in Danzig. In 1945, he became a refugee in West Germany, but in his fiction he frequently returns to the Danzig of his childhood.

He is best known for his first novel, The Tin Drum, a key text in European magic realism and the first part of his Danzig Trilogy. His works frequently have a left wing political dimension and Grass has been an active supporter of the Social Democratic Party of Germany. In 2006, Grass acknowledged that at the age of 17 he had volunteered for submarine service, was not accepted and instead drafted into a Waffen-SS Panzer Division.

Grass attended the Danzig Gymnasium Conradinum. In 1943 he became a Luftwaffenhelfer, then he was drafted into the Reichsarbeitsdienst. He volunteered for submarine service with the Kriegsmarine "to get out of the confinement he felt as a teenager in his parents' house" which he considered - in a negative way - civic Catholic lower middle class.[3][4] in November 1944, shortly after his seventeenth birthday, but was not accepted and instead was drafted into the 10th SS Panzer Division Frundsberg [5]. With the Panzer Division he saw active combat from February 1945 until he was wounded on 20 April 1945, captured in Marienbad and sent to an American prisoner-of-war camp. His home city was taken over by Soviet and Polish administration and he thus was not able to return home, finding refuge in western Germany.

In 1946 and 1947 he worked in a mine and received an education in stonemasonry. For many years he studied sculpture and graphics, first at the Kunstakademie Düsseldorf, then at the Berlin University of the Arts. Grass worked as an author, graphic designer, and sculptor, traveling frequently. He married in 1954 and since 1960 has lived in Berlin as well as part-time in Schleswig-Holstein. Divorced in 1978, he remarried in 1979. From 1983 to 1986 he held the presidency of the Berlin Academy of the Arts.

English-speaking readers probably know Grass best as the author of The Tin Drum (Die Blechtrommel), published in 1959 (and subsequently filmed by director Volker Schlöndorff in 1979). It was followed in 1961 by the novella Cat and Mouse (Katz und Maus) and in 1963 by the novel Dog Years (Hundejahre), which together with The Tin Drum form what is known as The Danzig Trilogy. All three works deal with the rise of National Socialism and with the war experience in the unique cultural setting of Danzig and the delta of the Vistula River. Dog Years, in many respects a sequel to The Tin Drum, portrays the area's mixed ethnicities and complex historical background in lyrical prose that is highly evocative.[who?]

As a trained graphic artist, he has also created the distinctive cover art for his novels.

Grass has received dozens of international awards and in 1999 achieved the highest literary honor: the Nobel Prize in Literature. His literature is commonly categorised as part of the artistic movement of Vergangenheitsbewältigung, roughly translated as "coming to terms with the past."

In 2002 Grass returned to the forefront of world literature with Crabwalk (Im Krebsgang). This novel, one of whose main characters first appeared in Cat and Mouse, was Grass' most successful work in decades, and is about the Soviet sinking of the refugee ship Wilhelm Gustloff in 1945 murdering 9000 people.

Representatives of the City of Bremen joined together to establish the Günter Grass Foundation, with the aim of establishing a centralized collection of his numerous works, especially his many personal readings, videos and films. The Günter Grass House in Lübeck houses exhibitions of his drawings and sculptures, an archive and a library.

Grass took an active role in the Social Democratic Party of Germany (SPD) and supported Willy Brandt's election campaign. Grass criticised left-wing radicals and instead argued in favour of the "snail's pace", as he put it, of democratic reform (Aus dem Tagebuch einer Schnecke). Books containing his speeches and essays have been released throughout his literary career.

In the 1980s, he became active in the peace movement and visited Calcutta for six months. A diary with drawings was published as Zunge zeigen, an allusion to Kali's tongue.

During the events leading up to the reunification of Germany in 1989-90, Grass argued for the continued separation of the two German states, asserting that a unified Germany would necessarily resume its role as belligerent nation-state.

In 2001, Grass proposed the creation of a German-Polish museum for art lost during the War. The Hague Convention of 1907 requires the return of art that had been evacuated, stolen or seized. Unlike many countries[citation needed] that have cooperated with Germany, some countries refuse to repatriate some of the looted art.[7][8] 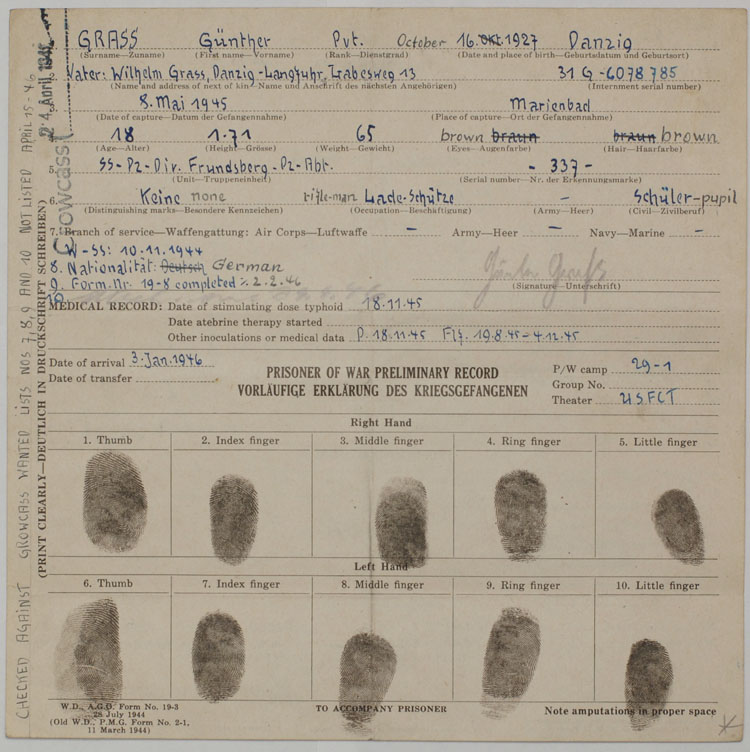 Günter Grass' prisoner of war record, indicating his membership of a Waffen-SS unit.

On 12 August 2006, in an interview [9] about his forthcoming book Peeling the Onion, Grass stated that he had been a member of the Waffen-SS. Before this interview, Grass was seen as someone who had been a typical member of the "Flakhelfer generation," one of those too young to see much fighting or to be involved with the Nazi regime in any way beyond its youth organizations.

Grass was trained as a tank gunner and fought with the 10th SS Panzer Division Frundsberg until its surrender to U.S. forces at Marienbad. In 2007, Grass published an account of his wartime experience in The New Yorker, including an attempt to "string together the circumstances that probably triggered and nourished my decision to enlist.".[11] To the BBC, Grass said in 2006:

It happened as it did to many of my age. We were in the labour service and all at once, a year later, the call-up notice lay on the table. And only when I got to Dresden did I learn it was the Waffen-SS.[12]

After 60 years, this confession comes a bit too late. I can't understand how someone who for decades set himself up as a moral authority, a rather smug one, could pull this off.[13]

As Grass has for many decades been an outspoken left-leaning critic of Germany's treatment of its Nazi past, his statement caused a great stir in the press.

Rolf Hochhuth said it was "disgusting" that this same "politically correct" Grass had publicly criticized Helmut Kohl and Ronald Reagan's visit to a military cemetery at Bitburg in 1985, because it also contained graves of Waffen-SS soldiers. In the same vein, the historian Michael Wolffsohn has accused Grass of hypocrisy in not earlier disclosing his SS membership. Many have come to Grass' defense based upon the fact the involuntary Waffen-SS membership was very early in Grass' life, starting when he was drafted shortly after his seventeenth birthday, and also precisely because he has always been publicly critical of Germany's Nazi past, unlike many of his conservative critics. For example, novelist John Irving has criticised those who would dismiss the achievements of a lifetime because of a mistake made as a teenager.[14] However, Pat Buchanan, Reagan's White House Communication's director at the time, has claimed that the very point that Reagan was seeking to emphasize in his own decision to visit Bitburg was that many of the Waffen-SS were either very young or had been drafted into the Nazi forces.[15]

Grass's biographer Michael Jürgs spoke of "the end of a moral institution".[16] Lech Wałęsa had initially criticized Grass for keeping silent about his SS membership for 60 years, but after a few days had publicly withdrawn his criticism after reading the letter of Grass to the mayor of Gdańsk, and admitted that Grass "set the good example for the others."[17] On 14 August 2006, the ruling party of Poland, Law and Justice, called on Grass to relinquish his honorary citizenship of Gdańsk. A 'Law and Justice' politician Jacek Kurski stated, "It is unacceptable for a city where the first blood was shed, where World War II began, to have a Waffen-SS member as an honorary citizen." However, according to a 2010 poll[18][19] ordered by city's authorities, the vast majority of Gdańsk citizens did not support Kurski's position. The mayor of Gdańsk, Paweł Adamowicz, said that he opposed submitting the affair to the municipal council because it was not for the council to judge history.[20]

2012 poem regarding Israel and Iran

April 4, 2012, Grass published a poem in the Süddeutsche Zeitung, entitled Was gesagt werden muss ("What must be said"), where he expressed concern about an Israeli military strike against Iran. The poem states: “Why do I only say now, aged and with my last ink: the atomic power Israel is endangering the already fragile world peace?” His answer to this rhetorical question is that the "incomparable" crimes of Nazis against Jews, and the duty of Germans to avoid anti-Semitism, have kept him silent. But he is no longer willing to stay quiet: “I admit: I will be silent no longer, because I am sick of the hypocrisy of the West.”[21]

The poem generated controversy in Germany and Israel,[22] and he was declared persona non grata by Eli Yishai, the Israeli Minister for the Interior, who remarked:"Grass' poems are an attempt to guide the fire of hate toward the State of Israel and the Israeli people, and to advance the ideas of which he was a public partner in the past, when he wore the uniform of the SS." Foreign Minister Avigdor Lieberman commented on the:'egoism of so-called Western intellectuals, who are willing to sacrifice the Jewish people on the altar of crazy anti-Semites for a second time, just to sell a few more books or gain recognition." Grass remarked that his poem criticised the present government of Israel for its policy that keeps building settlements despite a UN resolution.[23]