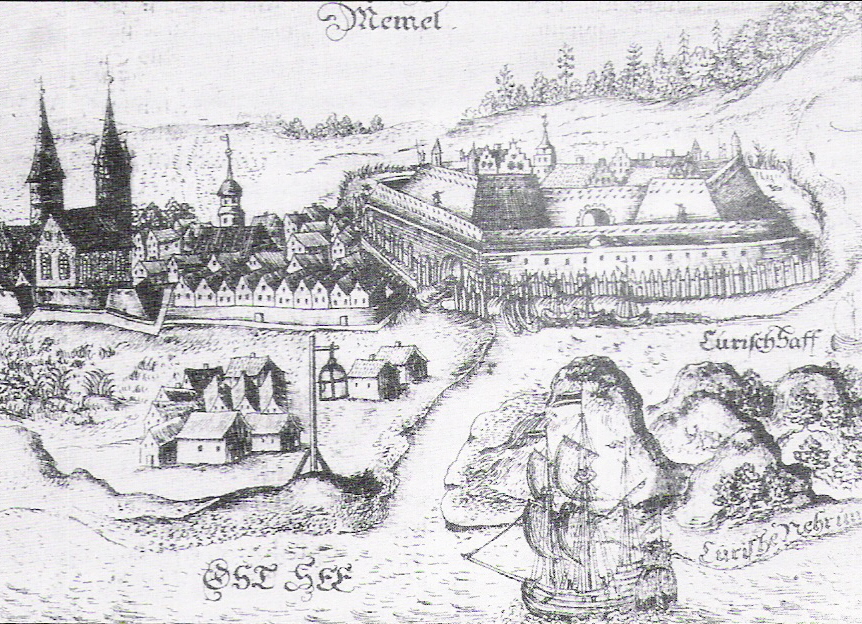 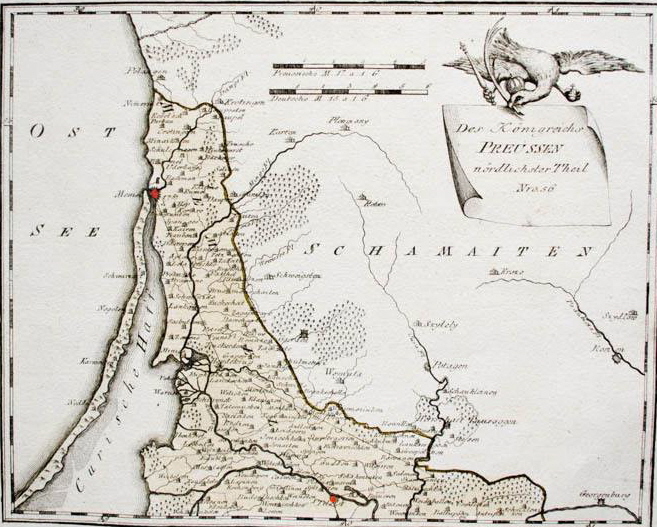 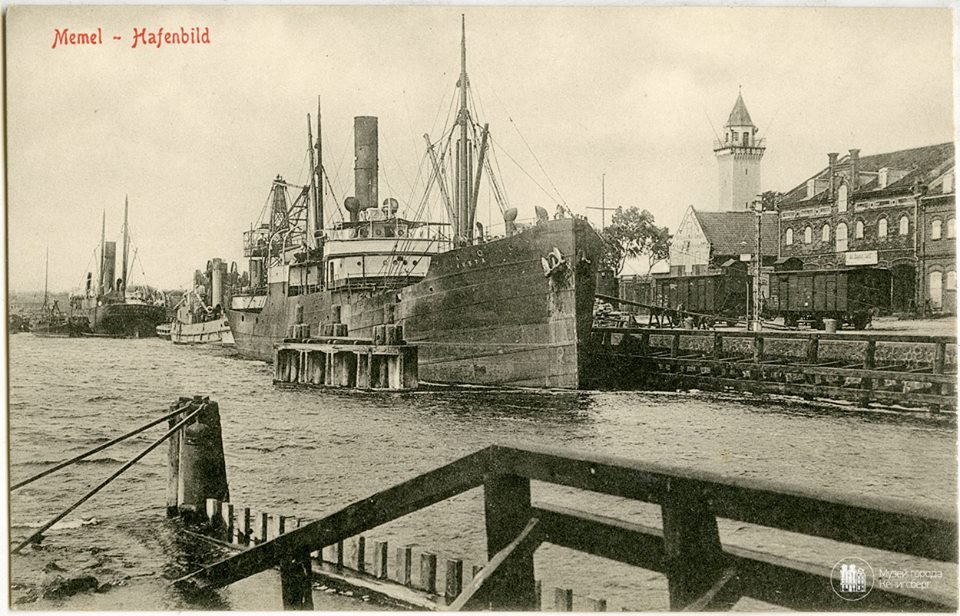 A wooden stockade built here by local fishermen was seized and destroyed in 1252 by the Teutonic Knights who built a new fortress which they named Memelburg. The town and adjacent territory of about 1000 square miles, sometimes called the Memelland, were settled by Germans,[6] and it became the northernmost town in Prussia and the central point of the Baltic timber trade.[7] In the winter of 1323 a heathen Lithuanian army took and devastated Memel, killing most of its Christian inhabitants.[8] In the early 1500s, when the Teutonic Order in Prussia were becoming secularised, the only Prussian brother who declared against the new Protestant Duke of Prussia was the Commander of Memel, Eric of Brunswick-Wolfenbuttel.[9] Following the Treaty of Konigsberg (January 17, 1656) Prussian harbours, including Memel, were opened to the Swedes, who divided the harbour dues with themselves. However this was shortlived.[10] Despite attacks and occupations over the centuries by Lithuanians, Poles, Swedes and Russians, Memel itself remained German in population and character and became a flourishing port, a member of the Hanseatic League,[11] whereas its rural hinterland was more or less evenly divided between German and Lithuanian populations.[12]

On October 9, 1920 the Poles, under General Zeligovski, had invaded Vilna in Lithuania, driving out the Lithuanian garrison, and proclaimed the city and its province part of Poland. Appeals by the de facto government of Lithuania[13] to the League of Nations were futile. Lithuania, thus instructed in the advantages of 'direct action', on January 10, 1923, imitating the Poles, made a surprise attack upon the Memel territory and city, then supposedly under League protection, forcing, with some street fighting, the French High Commissioner and his troops there to surrender and evacuate. The Allies and the League of Nations confronted with another fait accompli were forced to accept another humiliation. Lithuania now had an outlet to the sea.[14] 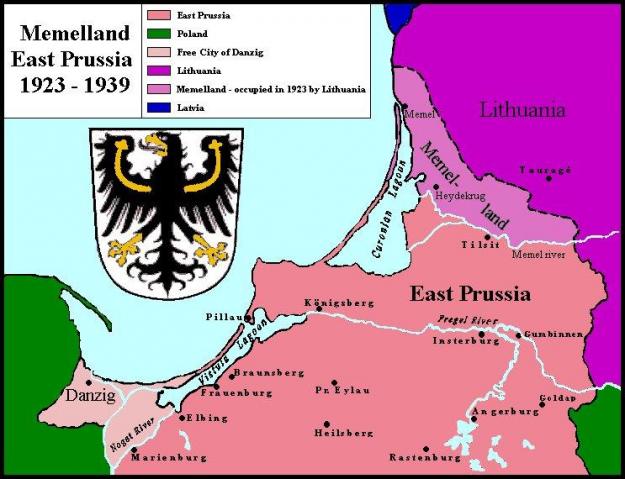 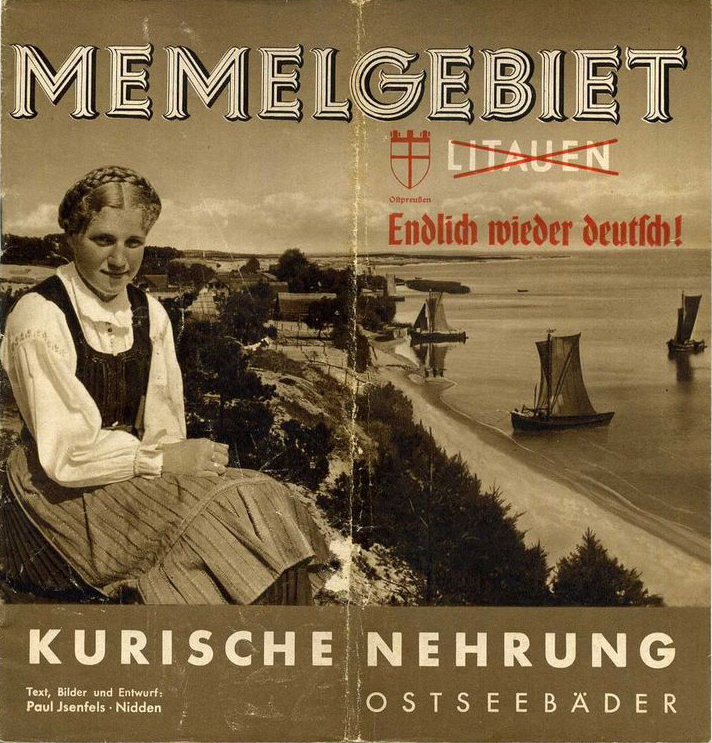 Poster proclaims Memel-land is NOT Lithuanian.

Through a convention suggested by a Commission of the League, accepted in March 1924, a measure of autonomy for the local inhabitants, overwhelmingly German, and rights of transit for Poland (despite that country being far distant), Memel was left in Lithuania's hands.[15] Despite the so-called autonomy, the Governor of the Memel-land was an appointed Lithuanian and from 1926 Martial Law was imposed. The Germans complained bitterly of "oppression", declined to have anything to do with the Lithuanian language, and began non-co-operation initiatives. Also, the first Landtag (district government), elected in October 1925, was composed of 27 Germans and 2 Lithuanians, a striking indication of the German sympathies of the Memellanders, even of those whose mother-tongue was Lithuanian. The Lithuanian Government, irritated by this, declared the council non-effective and resorted to other tactics. In 1934-5, 538 German employees were dismissed, along with large numbers of other government employees, right down to local police, postmen etc., who could not speak Lithuanian. This resulted, for instance, in Lithuanian school teachers being imposed upon the schools, in charge of German children, the scholars understanding scarcely a word the teachers spoke. People were unable to read signs in post offices. This resulted in violent unrest in Memel with wholesale arrests - 126 of them, all tried en masse by a court martial for "treason", almost all being found guilty with four sentenced to death. There was violent fury in Germany as a result and the Lithuanian President used his power of reprieve. However before the elections of September 1935 German newspapers were illegally suppressed and four candidates were deprived of their citizenship to prevent their election. In addition 9000 additional Lithuanians were given the vote. Naturally this produced more demonstrations and protests in the Landtag. The treatment of the Memellanders by Lithuania is well-documented and was widely reported. As with Danzig Germany wanted the return of Memel to the Fatherland, and in 1938 German troops were ready to recover Memel, in the event of a Lithuanian-Polish war, but this did not occur.[16][17][18] 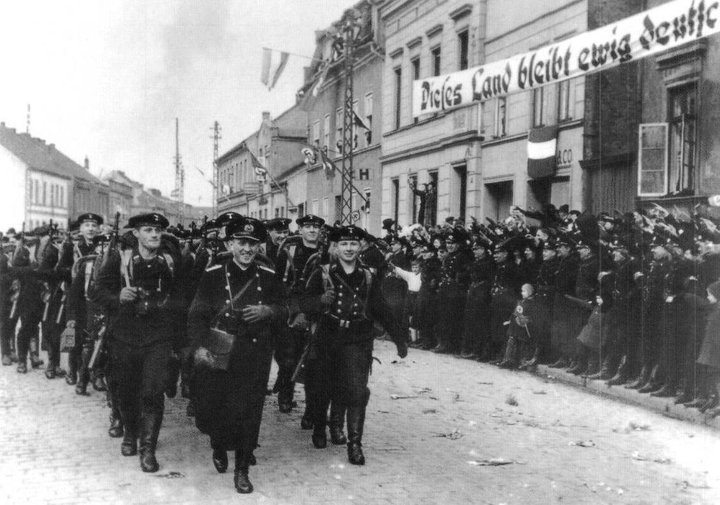 After conferences between the German & Lithuanian Governments' representatives in March 1939, an Agreement was reached and signed on March 23 transferring Memel and her territory back to German sovereignty. Hitler made a triumphal entry to Memel by sea on board the heavy cruiser Deutschland.[19]

Memel, being the northernmost city in East Prussia, suffered little during World War II, but became vulnerable as the Soviet Union’s army slowly began to drive the German army back. The Red Army broke into Memelland at the beginning of October 1944, their first incursion on German soil. The order for civilians to try and evacuate Memel was issued on the 7th. By the 10th, Memel itself was encircled, and the Soviet forces had broken through to the Baltic Sea between Memel and Libau in Latvia. By the 23rd the Memel district had to be given up and German troops retreated behind the river Memel (or Nieman).[20]

Although some of the population were already fleeing, others continued working. After the Soviets reached the Haff to the south of the city it was impossible to leave by land, and those who had attempted to escape via Tilsit were caught by the Soviets. On October 20th, Soviet army units had committed terrible atrocities and murders against trekking civilians just south of Gumbinnen and news of these caused people to want to flee. A steady stream were able to escape over the frozen Kurische Nehrung right up to January 1945, firstly being ferried and then trekking across the ice. Many were killed during this flight due to Soviet air attacks on the endless columns of people, the dropping of bombs to break up the ice, drowning, freezing to death, hunger, thirst and exhaustion. However, about 100,000 people fell into the hands of Soviet troops in the Memel territory and the district of Gumbinnen in East Prussia, with up to 50,000 in Memel city. Unlike the other parts of East Prussia, there were practically no population expulsions from the Memel territory, which, post-war, was incorporated into the Soviet Republic of Lithuania.[21]

Between the 16th and 18th centuries large numbers of Scottish immigrants settled in Memel[22]; Scotch merchants are mentioned in Memel about 1604.[23] Immanuel Kant, the famous philosopher, related how his grandfather Hans Cant, a harness and belt maker in Memel, had come from Scotland with his father.[24] The Governor of Memel in 1631 was Francis Ruthven, a Scot, and there was a Reformed (Presbyterian) congregation there, consisting mainly of Scottish and Dutch people, before 1640. This gradually became merged with that of the German 'Reformed Church' (Lutheran). In 1760 a Scottish immigrant (or descendant therefrom), John Simpson, gave a large donation when the rebuilding of the church was needed after damage done to it by Russian forces. Forty years later, in 1802, his cousin Ludwig Simpson, a rich Memel merchant, presented to the church the large sum of 8000 guilden, the interest of which was to be set aside for the raising of the schoolmaster's stipend.[25] A cadet branch of this Simpson family later became the proprietors of the famous horse stud at Trakhenan, near Insterburg.