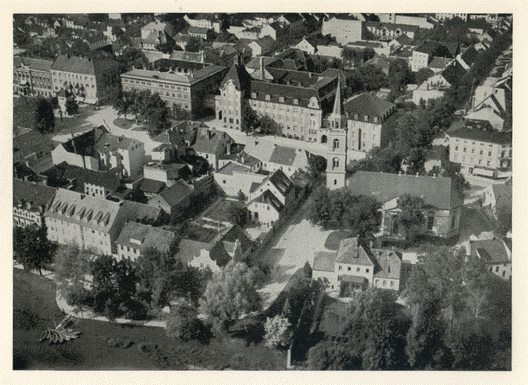 Gumbinnen was a large town and county on the river Pissa, and in the government district of the same name in East Prussia, made infamous by the appalling atrocities, "inconceivable and repulsive to the European mind", carried out here against civilians by the Soviet Union army on October 20, 1944, during World War Two.[1] In February/March 1944 the county itself had 717,000 inhabitants.[2]

In this district, towns and farms alike were plundered and often burned. In October 1944 the Soviet Army broke through into East Prussia reaching the village of Nemmersdorf, in the district of Gumbinnen. Its remaining inhabitants, all women and children, were slaughtered "in the most gruesome and bestial manner". Many were crucified. Moreover, fifty French prisoners of war had also been murdered trying to protect them. The German Fourth Army under General Friedrich Hossbach pushed the Soviets back out of German territory by November 5, and the authorities immediately invited neutral correspondents and doctors from Estonia, Switzerland, Sweden and Spain "to witness the frightful scene".[3] The Soviets soon returned, however, and men were murdered or deported to the Soviet Union as slave labour; husbands and fathers, sons and brothers, were made to hold lamps and watch while whole squads of soldiers violated and raped their women, girls as young as eight, to grandmothers in their eighties. If the men resisted they were shot, or castrated and then shot. Women who resisted too strongly were knifed and dis-embowelled. Officers pulled rank to rape the prettiest young women. Alexander Solzhenitsyn, then a captain in the Red Army, sorrowfully wrote: "whoever was still a virgin, was soon to become a woman; the women soon to become corpses; their eyes bloody, already glazed over, pleaded to be killed." German civilian defence men, the Volkssturm, were doused in petrol and set aflame. Women were nailed naked to barn doors; babies with their heads bashed in littered the floors of ravaged homes.[4]