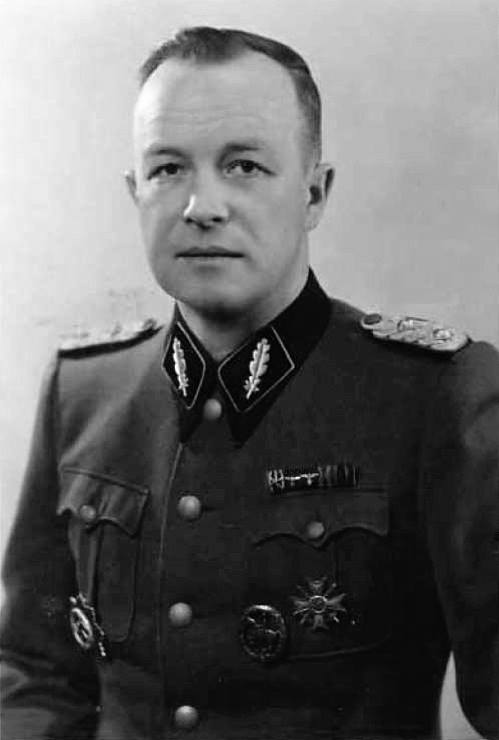 Franz Xaver Ziereis (b. 13 August 1905 in München; d. 24 May 1945 in Gusen) was a German merchant, non-commissioned officer of the Reichswehr as well as the Wehrmacht and officer of the SS, at last SS-Standartenführer and commandant of the Mauthausen camp during WWII. 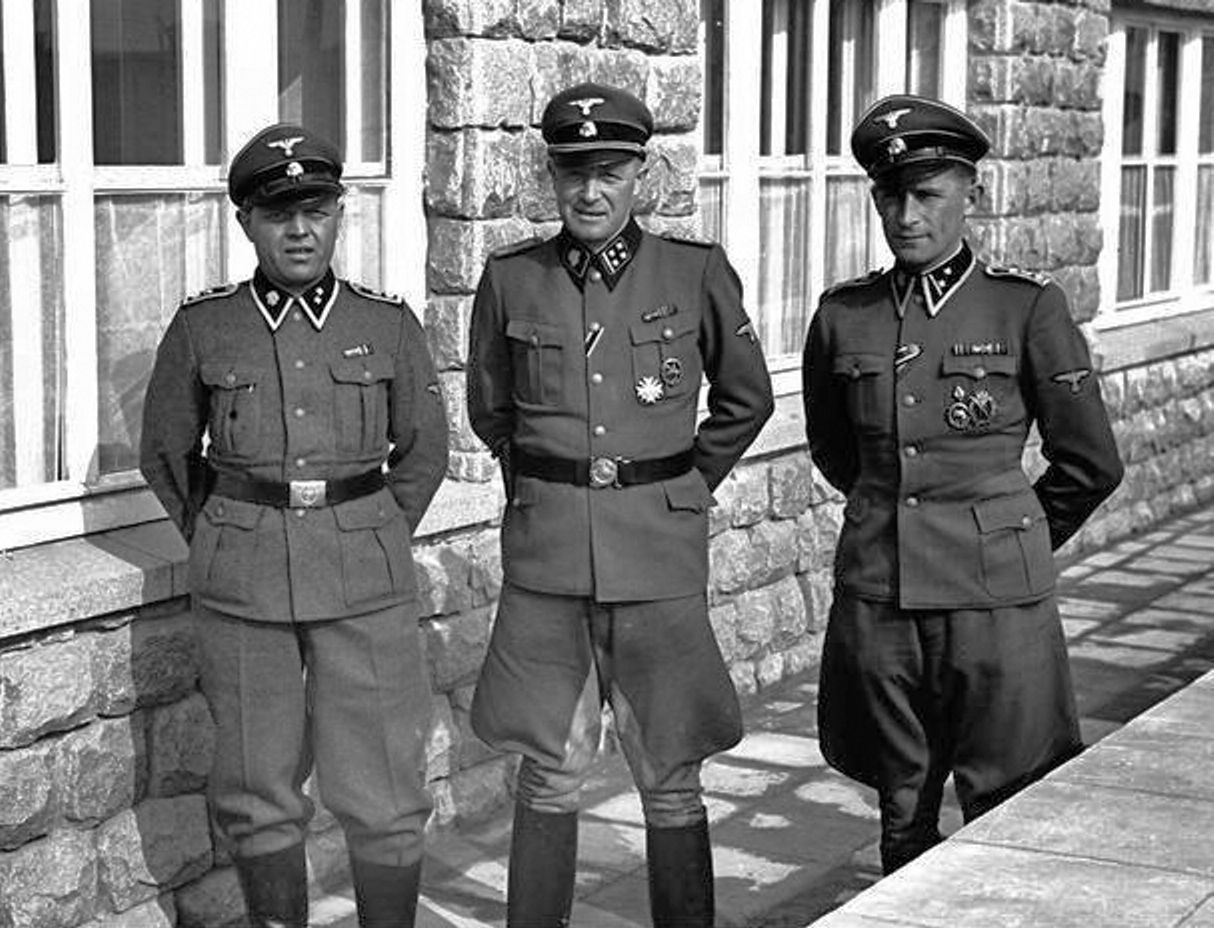 Kommandant SS-Obersturmbannführer Franz Ziereis (center) with two of his NCOs 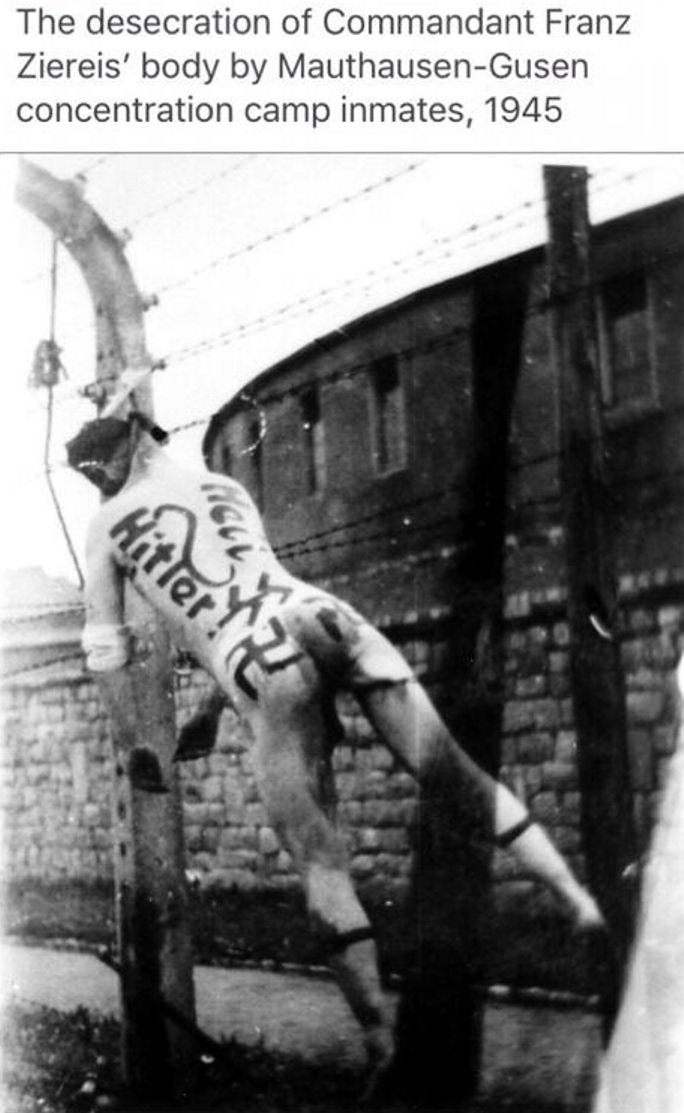 After Franz Ziereis was murdered, the US-Americans invaders allowed former prisoners to hang his corpse on the camp fence in Gusen I like a slaughtered pig.

Ziereis was born August 13, 1905, in Munich. After attending commercial school in Munich, he signed up as a career military officer in Germany's Reichswehr (army) on April 1, 1924, for 12 years. On September 30, 1936, he left the army with the rank of sergeant and joined the SS. He was appointed SS Obersturmführer (SS first lieutenant), and in 1937 took over the leadership of the 22nd Hundertschaft (hundred-man-unit) of the SS Death's Head detachment "Brandenburg." In the spring of 1938 Ziereis participated with SS mobile units in the occupation of Austria. On July 1, 1938, he was transferred to the SS Death's Head regiment "Thüringen" as a training instructor. Upon an order by the leader of the SS Death's Head formations and by the inspector of the concentration camps, Theodor Eicke, Ziereis was sent from Buchenwald to Mauthausen on February 9, 1939, to take over the post of Commandant of Mauthausen, replacing Albert Sauer. On August 25, 1939, Ziereis was promoted to the post of SS-Sturmbannführer (SS major) and, on April 20, 1944, due to "special achievements" as camp commandant, eventually to the rank of SS-Standartenführer (SS colonel). After May 3, 1945, Ziereis fled together with his wife, but was discovered by American soldiers at his hunting lodge on the Phyrn mountain in Upper Austria on May 23. He tried to escape but was shot and seriously wounded.[1]

The revisionist Germar Rudolf has written on problematic "confessions" and stated that "As another example, take the confession by Franz Ziereis, last commander of the Mauthausen camp, who was shot in the stomach three times and was thereupon not sent to a hospital, but instead interrogated by a former inmate of Mauthausen, Hans Marsalek, while bleeding to death. In his “deathbed confession,” Ziereis is said to have testified the following:[2]

“SS Gruppenführer Glücks gave the order to designate the weak prisoners as sick and to kill them by gas in a large installation. There, around 1-1 1 / 2 million persons were killed. The area in question is named Hartheim and is located 10 kilometers in the direction of Passau. [...] right after the war and during the Nuremberg Military Tribunal, these confessions were taken seriously (IMT, vol. 11, pp. 331f.). The room in Hartheim castle that is today claimed to have been this gas chamber measures some 280 sq ft (Marsalek 1988, p. 26). [...] three to five times as many people are said to have been killed in this tiny room, if we follow Ziereis or rather Marsalek, than Americans ever died during WWII in the European theater of war."[2]

The revisionist Carlos Porter has stated that Ziereis allegedly confessed to

"making lampshades out of human skin; manufacturing counterfeit money; and supplied a complicated table of statistical information containing the exact number of inmates in 31 different camps. He then accused Kaltenbrunner of ordering the entire camp (Mauthausen) to be killed upon the approach of the Americans. Ziereis had been dead for 10 and a half months when he made this "confession". Fortunately, the "confession" has been "remembered" by someone else: a concentration camp inmate named Hans Marsalek, who never appeared in court, but whose signature appears on the document. [...] The document is not signed by anyone else alleged to have been present at Ziereis's "confession", and no notes alleged to have been taken at the time are appended to the document. The document bears two signatures only: that of Hans Marsalek, the inmate; and that of Smith W. Brookhart Jr. U.S. Army. The document bears the date 8 April 1946. Ziereis died 23 May 1945. The pretense was that Ziereis was too seriously injured (he died of multiple gunshot wounds through the stomach) to sign anything at the time, but he was healthy enough to dictate this lengthy and complex document, which was then "remembered" exactly and verbatim by Marsalek for 10 and a half months. Marsalek would, of course, have had no motivation to lie. The document is in German. Brookhart was a confession ghostwriter who also wrote the "confessions" of Rudolf Höss (in English, Document 3868-PS) and Otto Ohlendorf (in German, Document 2620-PS). [...] Ziereis's "confession" continues to be taken seriously by Reitlinger, Shirer, Hilberg, and other itinerant peddlars of Holo-Schlock."[3]