Wilhelm "Willi" Frick (b. 12 March 1877 in Alsenz; d. 16 October 1946 in Nuremberg) was a prominent German attorney and National Socialist official who served as Minister of the Interior (Reichsminister des Innern) from 1933 to 1943 and after this as the last governor of the Protectorate of Bohemia and Moravia. He was also Reichsleiter and Member of the Reichstag (Leader of the Reichstag faction as of 10 October 1933). At the Nuremberg Show Trials he was sentenced to death.[1] 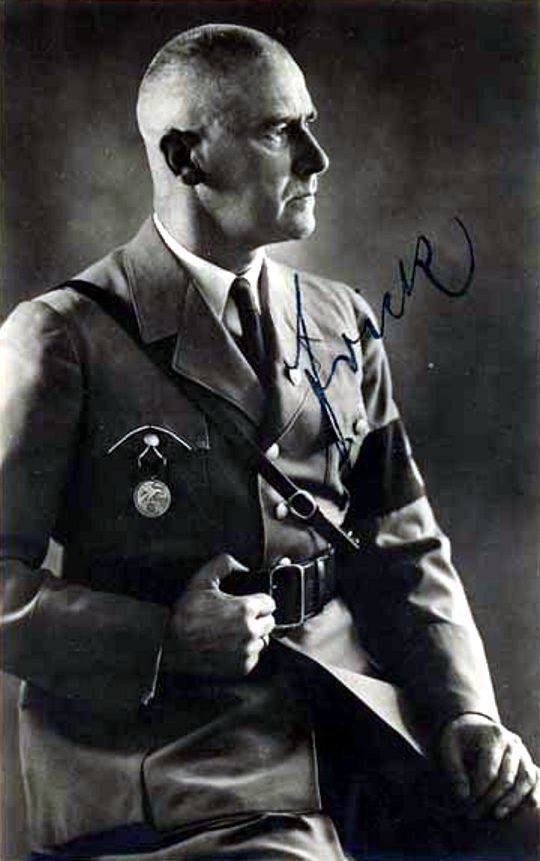 Frick was born in the Palatinate municipality of Alsenz, Kingdom of Bavaria, German Empire, the last of four children of teacher Wilhelm Frick the elder and his wife Henriette, née Schmidt.

He joined the Bavarian civil service in 1903, working as a lawyer at the police headquarters in Munich. He was made a Bezirksamtassessor in 1907 and rose to the position of Regierungsassessor by 1917 (rejected as medically unfit, Frick did not serve in World War I, although he had he volunteered), and, at his own request, re-assumed his post at the Munich Police Department.[2]. By 1923 he was director of the Munich Kriminalpolizei. Wilhelm Frick took part in the Munich Putsch (November 1923). He was one of those arrested and tried for treason, in April 1924. Found guilty he was given a sentence of 15 months imprisonment and dismissed from his police employment. However, he only served five months in custody and was then placed on probation. He was subsequently employed by an insurance company.

Joining the National Socialists Frick was elected to the Reichstag in May 1924 and associated himself with the radical National Socialist leader Gregor Strasser; he climbed to posts of leadership in the NSDAP, becoming Fraktionsführer in 1928.[3]

Wilhelm Frick was appointed Minister of the Interior and of Education in the state government of Thuringia during 1930–31, being the first National Socialist to hold any ministerial-level post in pre-NS Germany.[4]

When Adolf Hitler came to power in January 1933, Frick was appointed Minister of the Interior of the Reich. He initially had far less power than his counterparts in the rest of Europe. For example, he had no authority over the police. In Germany, law enforcement has traditionally been a state and local matter.

Frick's power dramatically increased as a result of the Reichstag Fire Decree and the Enabling Act of 1933. He was responsible for drafting many of the "Gleichschaltung" laws that consolidated the new government.[5] Under the Law for the Reconstruction of the Reich, which converted Germany into a highly centralized state, the state governors were responsible to him. By 1935, he also had sole power to appoint the mayors of all municipalities with populations greater than 100,000 (except for Berlin and Hamburg, where Hitler reserved the right to appoint the mayors).

Frick was given the responsibility for drafting the Nuremberg Race Laws (September 1935),[3] and took a leading part in Germany's re-armament: a technical violation of the Versailles Treaty, although it pre-dated the Nazis. He was instructed to draft laws introducing universal military conscription and extending the military service law to Austria after the Anschluss, as well as to the annexed regions of Czechoslovakia.[6] In the summer 1938 Wilhelm Frick was named the patron (Schirmherr) of the Deutsches Turn- und Sportfest in Breslau, a patriotic sports festival attended by Hitler and the National Socialist leadership.

From the mid-to-late 1930s Frick lost favour irreversibly within the Party after a power struggle involving attempts to resolve the lack of coordination within the Reich government. For example, in 1933 he tried to restrict the use of "protective custody" orders that were used to send people to concentration camps, only to be overruled by SS chief Heinrich Himmler. Frick's power was greatly reduced in 1936 when Hitler named Himmler chief of all German police forces. This effectively united the police with the SS and made it virtually independent of Frick's control, since Himmler was responsible only to Hitler. A long-running power struggle between the two culminated in Frick being replaced by Himmler as interior minister in 1943.

Frick was later appointed to the post of Protector of Bohemia and Moravia. Prague, the capital of the protectorate, where Frick was said to have resorted to ruthless methods to counter anti-German terrorism, was one of the last Axis-held cities to fall at the end of World War II in Europe.[7]

Dr. Frick was arrested and tried before the International Military Tribunal at Nuremberg, where he, a highly qualified lawyer, was the only defendant besides Rudolf Hess who refused to testify on his own behalf. Frick was convicted of planning, initiating and "waging wars of aggression", and "crimes against humanity". Wilhelm Frick was sentenced to death on October 1, 1946, and was hanged just over two weeks later on 16 October 1946.

The full final statement made by his defence team before the Nuremberg Tribunal said:

"As for the accusations against me I have a clear conscience. My whole life was service to people and country. To you I have dedicated my best strength in faithful duty. I am convinced that no patriot would have traded Americans or nationals of another country in the same situation in his country in my position differently. For any other action it would have meant breaking my oath of loyalty, and been high treason. For the fulfillment of my legal and moral obligation, I believe I am no more deserving of punishment, like the tens of thousands of dutiful German officials and public employees, which today are still kept, for fulfilling their duty, in the camps. Their loyalty to me as a former long-time official Minister of State is a special honour to duty."

His last words before execution were:

Today, one can see Wilhelm Frick's military dress uniform at Motts Military Museum in Groveport, Ohio, just part of the shiploads of goods looted and stolen from Germany by the Americans. The uniform was found in Frick's home shortly after he was arrested in 1945. The US soldier who found and stole the items, Richard Roberts, from Columbus, Ohio, was a member of the CIC (Counter Intelligence Corps).

On 25 April 1910, Frick married Elisabetha Emilie Nagel (1890–1978) in Pirmasens. They had two sons and a daughter. The marriage ended in a divorce in 1934. A few weeks later, on 12 March, Frick remarried in Münchberg Margarete Schultze-Naumburg (1896–1960), the former wife of architect, artist and Reichstag MP Paul Schultze-Naumburg (de). Margarete gave birth to a son and a daughter.[8]