Protectorate of Bohemia and Moravia

The Protectorate of Bohemia and Moravia (German: Protektorat Böhmen und Mähren; Czech: Protektorát Čechy a Morava) was the protectorate which National Socialist Germany established in the rump remains of the truncated Czechoslovakia following the secession of the Sudetenland and Slovakia and the invasion of Teschen by Poland. The Protectorate was requested by the Czech government. It was established on 15 March, 1939 by Proclamation at Prague Castle following the declaration of independence of Slovakia the previous day by the Slovak Diet. Bohemia and Moravia became autonomous German-administered territories which the German state considered part of ancient Teutonic lands (being until 1919 Austrian Crown Lands). The Protectorate's existence came to an end with the invasion of the Red army and USA army in April 1945. 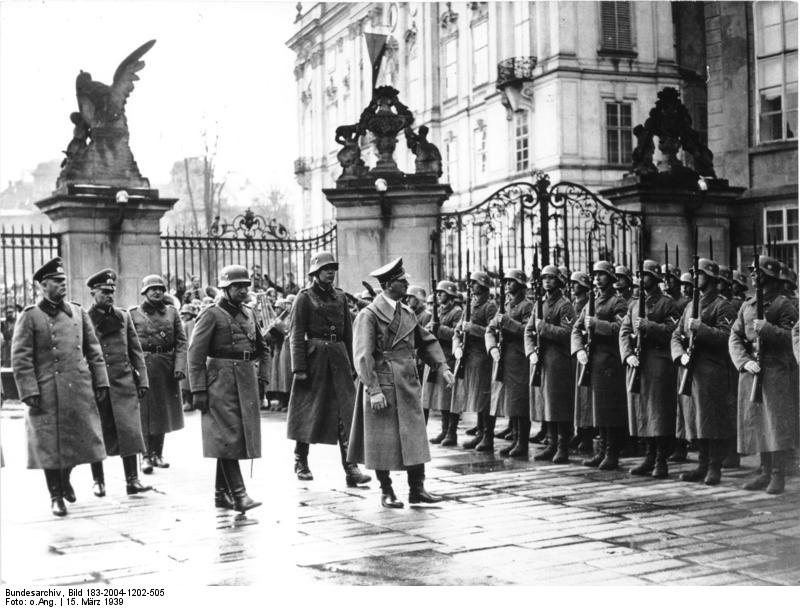 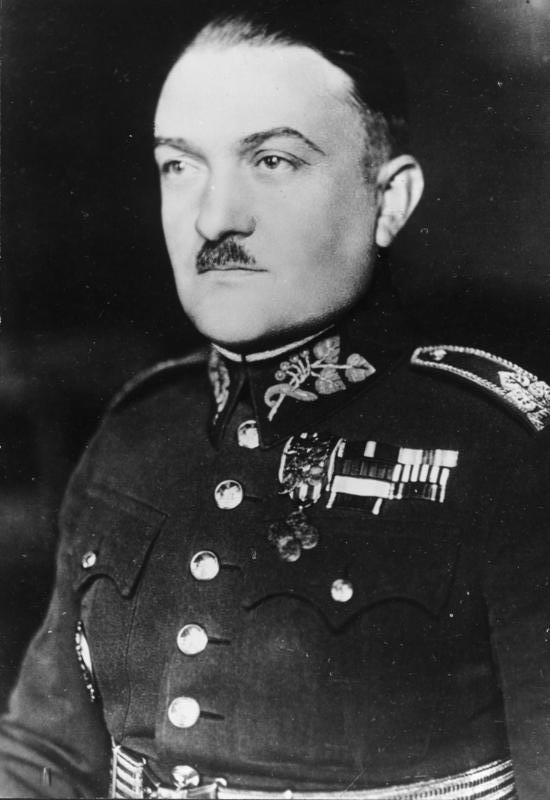 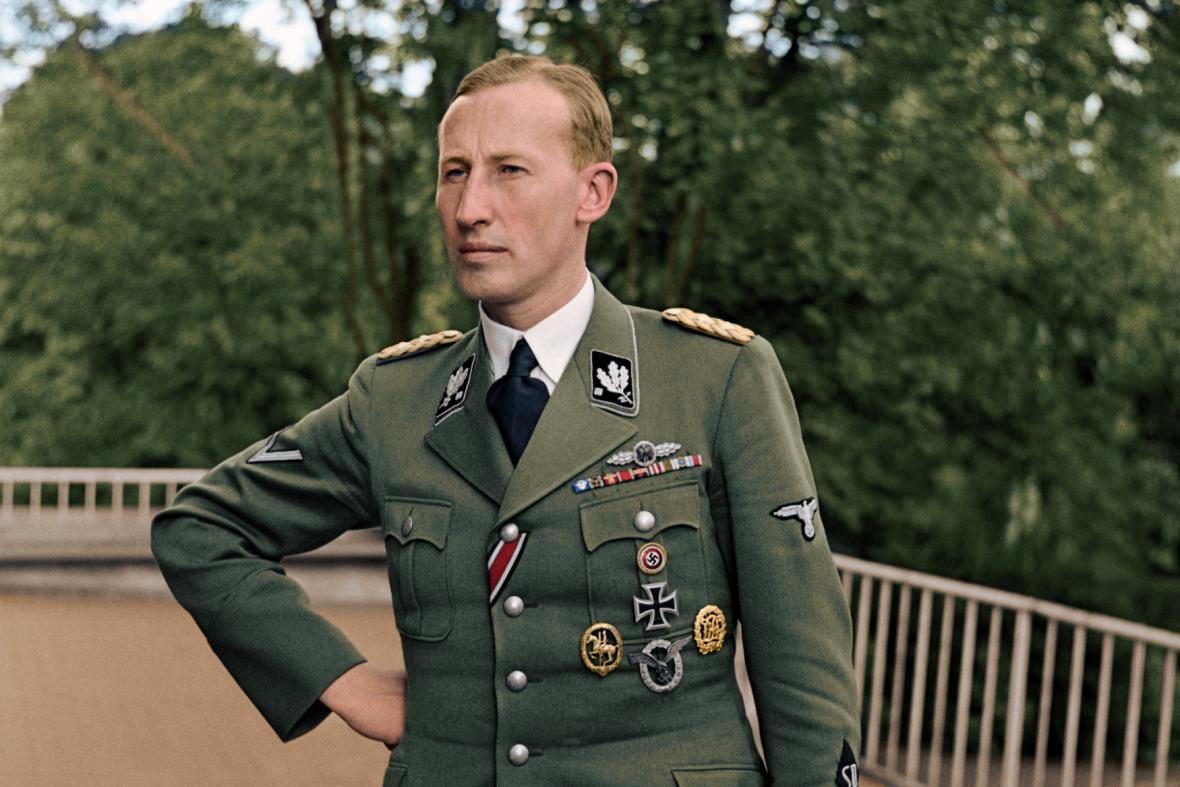 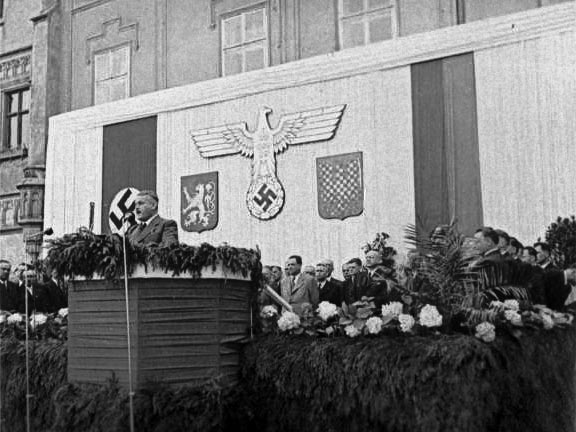 The Sudetenland constituted a considerable part of the borderlands of Czechoslovakia with Germany and Austria and contained a majority of ethnic German inhabitants. Under the Munich Agreement it was detached from Czechoslovakia and incorporated directly into Germany on 10 October, 1938. Five months later, after the Slovak Diet declared the independence of Slovakia, the Czech President Emil Hácha travelled to Berlin and persuaded Hitler into accepting his remaining rump state becoming part of the German Reich.

Bohemia and Moravia were subsequently declared a Protectorate of Germany and were placed under the supervision of the first Reichsprotektor, 65 year-old Baron Konstantin von Neurath, a diplomat. Hácha remained as technical head of state with his title of State President; German officials manned departments analogous to cabinet ministries, while small German control offices were established locally. The Gestapo political police also established themselves. Jews were dismissed from the civil service and placed in an extra-legal position. Political parties were banned, and many Communist Party of Czechoslovakia leaders and members fled to the Soviet Union.

German rule was moderate during the first months of the occupation. The Czech government and political system, reorganized by Hácha, continued in formal existence. Gestapo activities were directed mainly against renegade Czech politicians and the intelligentsia opposing the loss of Czech sovereignty, communists and other enemies of the State. The eventual goal was full assimilation as provinces of Greater Germany.

On October 18, 1939, the anniversary of the 1919 State, groups of Czechs demonstrated against the German Protectorate. The death on November 15, 1939 of a medical student who had been wounded in this October violence, precipitated widespread student demonstrations, and the authorities naturally retaliated. Politicians considered to be overtly sympathetic to Czech nationalism were arrested, as were an estimated 1,800 students and teachers known to be trouble-makers. On November 17 nine student leaders were executed, and hundreds were sent to concentration camps in Germany.reference required All universities and colleges in the Protectorate were then closed.

On September 27, 1941, the Reich Government adopted a more radical policy in the Protectorate. SS official Reinhard Heydrich was appointed Deputy Reichsprotektor of Bohemia and Moravia. Under his authority Prime Minister Alois Eliáš was arrested, having maintained contact with the government-in-exile. Because of his participation also in the anti-Nazi resistance he was later executed. Heyrich reorganised the Czech government and all Czech cultural organizations were closed. The Gestapo also carried out arrests. The deportation of Jews to concentration camps was to be organized, and the fortress town of Theresienstadt was made into a ghetto station for Jewish families. On June 4, 1942, Heydrich died from septicaemia after being wounded by a terrorist assassin who had been parachuted into the Protectorate by the British RAF. Heydrich's successor, Colonel General of Germany's Order Police, Kurt Daluege, ordered mass arrests and executions and the destruction of the village of Lidice as a reprisal and a lesson to all as to what would happen if anything like this occurred again.

The population of the protectorate was mobilized for labour that would aid the German war effort, and special offices were organized to supervise the management of industries important to that effort. Additional Czechs were drafted to work in coal mines, the iron and steel industry, and armaments production which already existed in the Protectorate. Consumer goods production, much diminished, was largely directed toward supplying the German armed forces. The protectorate's population was subjected to the same strict rationing throughout the Reich.

In 1943 the German war effort was accelerated. Under the authority of Karl Hermann Frank, German Minister of State for the entire police network in Bohemia and Moravia, some 350,000 Czech labourers were dispatched to Germany proper. Within the Protectorate, all non-war-related industry was prohibited. Most of the Czech population obeyed quiescently up until the final months preceding the end of the war. As in France, the few resistance groups were mostly communists.

Ultimate authority within the Protectorate was held by the Reich Protector (Reichsprotektor), the area's senior National Socialist administrator whose task it was to represent the interests of the German state. The Office and title were held by a variety of persons during the Protectorate's existence. In succession these were: 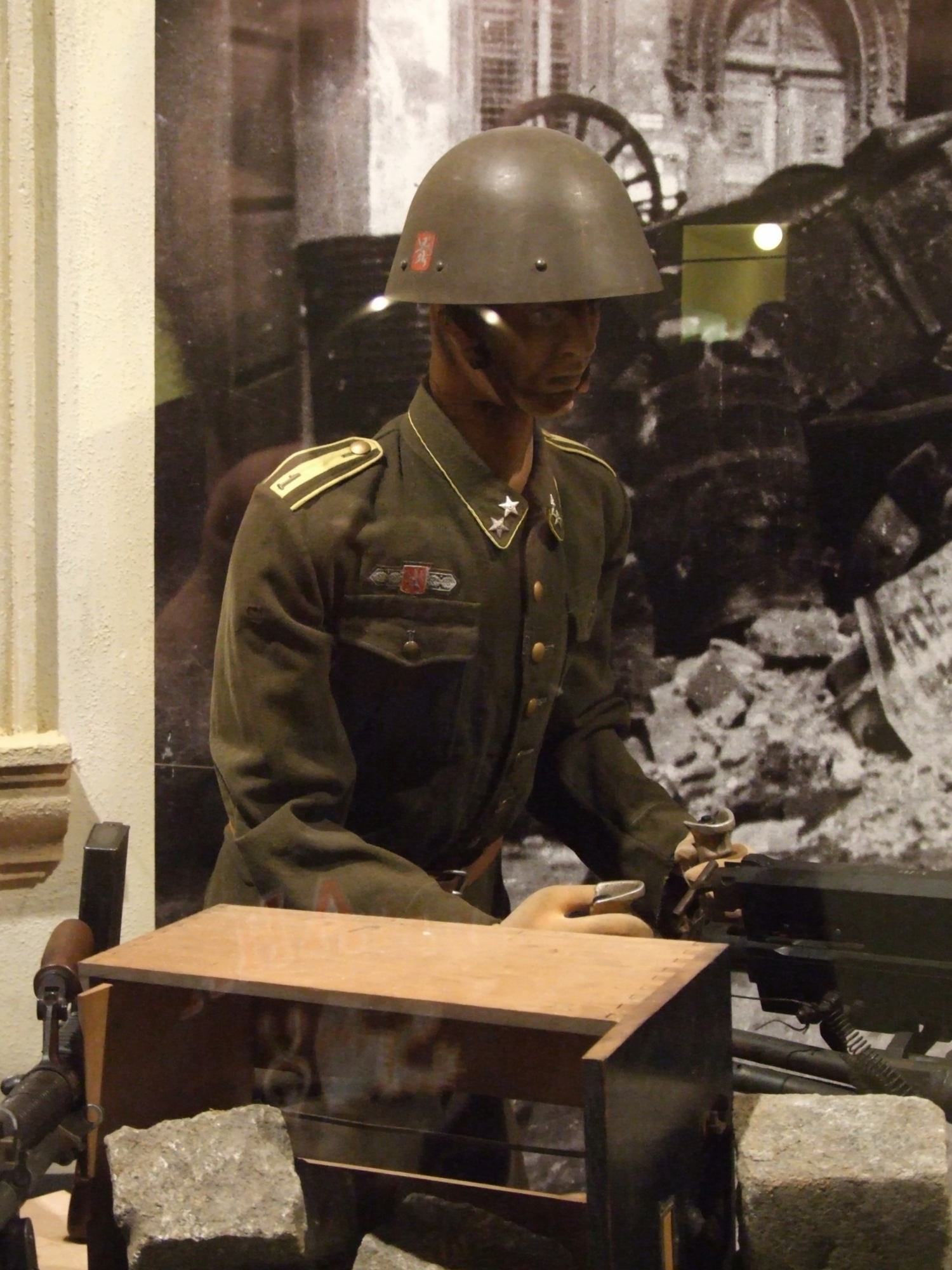 Konstantin von Neurath, former Foreign Minister of Germany, Minister without Portfolio until 1943. He was removed from office after Hitler's dissatisfaction with his "soft policies" in 1941, although he still held the title until his official resignation in 1943.

Reinhard Heydrich, chief of the Reich Security Main Office or RSHA (Reichssicherheitshauptamt). He was officially only a deputy to von Neurath, but in reality was granted supreme authority over the entire state apparatus of the Protectorate.

Kurt Daluege, Chief of the Ordnungspolizei in the Interior Ministry, who was also officially a deputy Reich Protector.

Next to the Reich Protector there was also a political office of State Secretary (from 1943 known as the State Minister to the Reich Protector) who handled most of the internal security. From 1939 to 1945 this person was Karl Hermann Frank the senior SS and Police Leader in the Protectorate. A "paper command" of the Allgemeine-SS, with no operational authority, was also established known as the SS-Oberabschnitt Böhmen-Mähren.

The Czech State President (Státní Prezident) under the period of German rule from 1939 to 1945 was Emil Hácha (1872–1945), who had been the President of the Second Czechoslovak Republic since November 1938. Rudolf Beran (1887–1954) initially still held the office of Minister President (Předseda vlády) after the German take-over. He was soon replaced by Alois Eliáš on 27 April 1939, who was himself also sacked on 2 October 1941 not long after the appointment of Reinhard Heydrich as the new Reich Protector. Because of his contacts with the Czechoslovak Government-in-Exile Eliás was sentenced to death, with the execution carried out on 19 June 1942 shortly after Heydrich's own death. From 19 January 1942 the government was led by Jaroslav Krejčí, and from January to May 1945 by Richard Bienert, the former police chief of Prague. When the official dissolution of the Protectorate was proclaimed after the Liberation of Prague a radio call was issued for Bienert's arrest. This resulted in his conviction to a three-year prison term in 1947, during which he died in 1949.

Aside from the Office of the Minister President, the local Czech government in the Protectorate consisted of the Ministries of Education, Finance, Justice, Trade, the Interior, Agriculture, and Public Labour, so still quite a considerable control over civilian matters. The Protectorate's foreign policy and military defence were under the exclusive control of the German government. The former foreign minister of Czechoslovakia František Chvalkovský became a Minister without Portfolio and permanent representative of the Czech administration in Berlin.

The most prominent Czech politicians in the Protectorate included:

Population and the future plan

In 1936 the population of Czecho-Slovakia was 15,187,000, of which 7,300,000 were Czechs, 2,300,000 Slovaks and 3,231,688 Germans plus numerous other nationalities including Hungarians, Ruthenians and Jews.[2] The Czechs made up approx. 43% of the population. However it is difficult to assess the exact population of the Protectorate of Bohemia and Moravia after the Sudetenland and Slovakia left the former state as no census was subsequently taken.

Hitler had approved a plan designed by Konstantin von Neurath and Karl Hermann Frank, which projected the Germanization of the "racially valuable" half of the Czech population after the end of the war.[3] This consisted mainly of industrial workers and farmers.[3] The undesirable half was said to contain the troublesome so-called intelligentsia, whom the National Socialists viewed as un-Germanizable and potentially dangerous agitators of Czech nationalism, with their Great War disruptions and treachery during the Austro-Hungarian Empire still well within living memory. Some 9,000 Volksdeutsche from Bukovina, Dobruja, South Tyrol, Bessarabia, Sudetenland and the Altreich were settled in the Protectorate during the war.[3] The goal was to create a German settlement belt from Prague to Sudetenland, and to turn the surroundings of Olmetz, Budweis, Brünn and the area near the Slovak border into German enclaves.[3]

Further integration of the protectorate into the Reich was carried through by the employment of German apprentices, by transferring German evacuee children into schools located in the protectorate, and by authorizing marriages between Germans and assimilable Czechs.[3] Germanizable Czechs were allowed to join the Reich Labour Service and be admitted to German universities.[3]

Czech losses resulting from political persecution and deaths in concentration camps are unclear, but claims of between 36,000 and 55,000 have been made. The Jewish population of Bohemia and Moravia (118,000 according to the 1930 census) was drastically reduced. Many Jews had emigrated throughout 1938-1939; more than 70,000 were killed; 8,000 survived at Theresienstadt. Several thousand managed to live in hiding throughout the occupation. It is said the extermination of the gypsy population was so thorough that the Bohemian Romani dialect became totally extinct. Romani internees were sent to the Lety and Hodonín concentration camps before, it is said, being transferred to Auschwitz-Birkenau. The vast majority of Romani in the Czech Republic today are actually descended from migrants from Slovakia who moved there during the post-war years of Czechoslovakia. 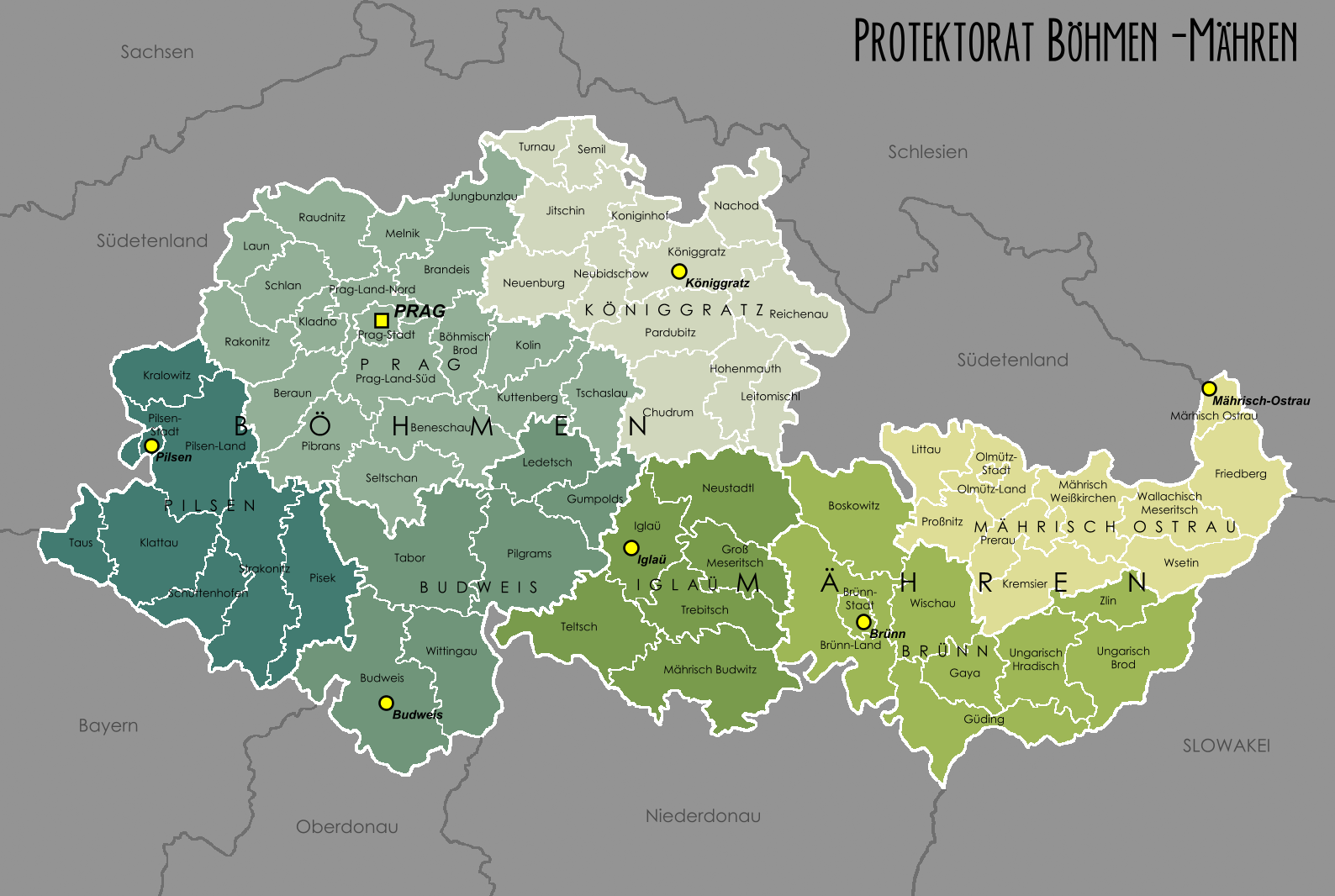 Protectorate of Bohemia and Moravia 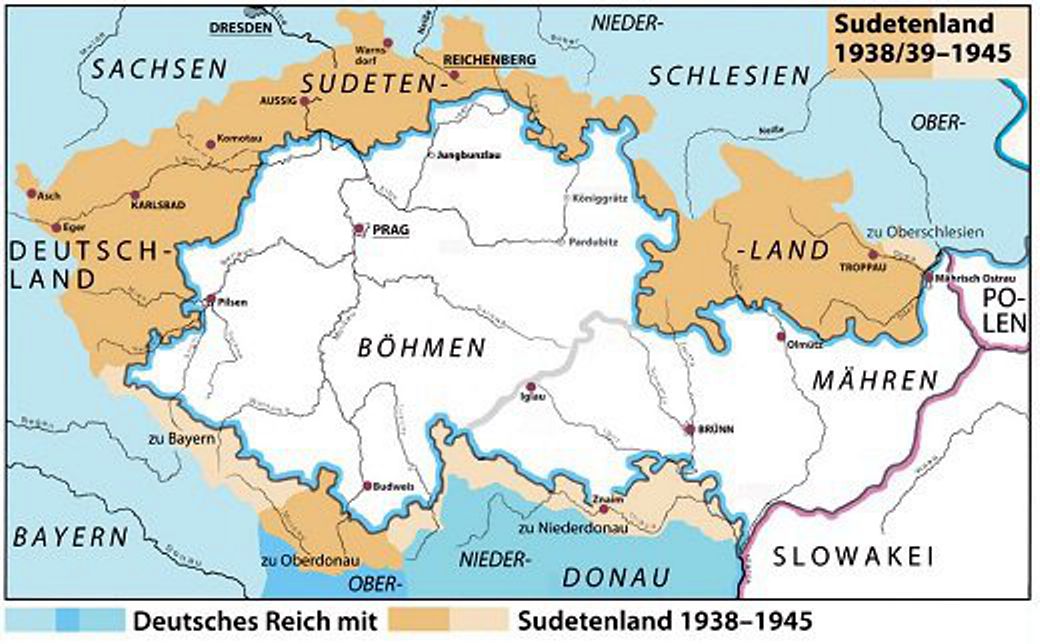 Reichsgau Sudetenland, also short Sudetengau, and the Protectorate of Bohemia and Moravia from 1938/39 until 1945

For administrative purposes the Protectorate of Bohemia and Moravia was divided into two Lands; Böhmen (Bohemia) and Mähren (Moravia). Each of these was further subdivided into Oberlandratsbezirke, each comprising a number of Bezirke.

The resulting government overlap led to the usual authority conflicts typical of the Third Reich era. Seeking to extend their own powerbase and to facilitate the area's "Aryanization" the Gauleiters of the surrounding districts continually agitated for the liquidation of the Protectorate and its direct incorporation into the German Reich. Hitler stated as late as 1943 that the issue was still to be decisively settled.[4]