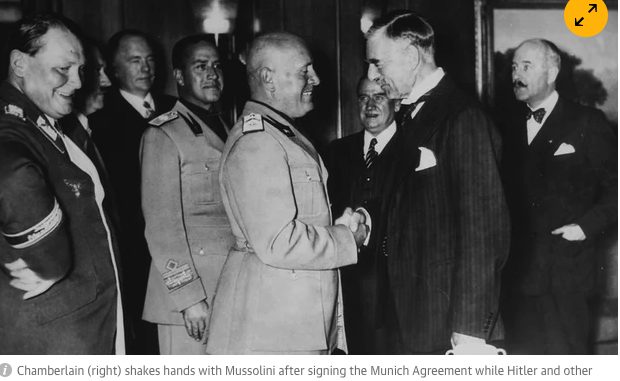 The Munich Agreement (German: Münchener Abkommen) was concluded during the night of 29/30 September 1938, by the political leaders of Germany, the United Kingdom, France, and Italy. The UK and France were the leading members of the League of Nations.

Disputes had arisen between the Czechs, who constituted just 43 per cent of the population of Czechoslovakia and the other minority populations in that country, whom the Czechs oppressed, almost since the establishment of this new artificial State[1][2][3] in 1919. The almost arbitrary borders of that State had been drawn at the Paris Peace Conference following the end of The Great War and the collapse of the Central Powers.

Alexander Powell, writing in 1928, said "that of all the countries of eastern Europe, Czechoslovakia was the best risk [of trouble]. This lies in the selfishness displayed by the Czechs of Bohemia in their relations with others." He continues: "the Czechs have stubbornly refused to listen to reason, even when arguments for a change in their attitude have been advanced by friends. Their frontiers were fixed at Trianon 'for all time', they assert, and in their refusal to consider any revision they are adamant. Their uncompromising attitude is doubtless attributable to the fact that just at present they are considerably 'above themselves'. But such a frame of mind is hardly surprising in a people who obtained their independence so recently, so suddenly, who have had good fortune literally thrust upon them."[4] Hitler described Czechoslovakia as "a structure manufactured at Versailles....an untenable situation"[5].

Czechoslovakia had for centuries been part of Austria and Hungary. In particular, the ethnic Germans, who had lived there for up to 900 years and formed 25% of the population, were singled out for especially poor treatment by the Czechs, and great unrest began to forment in the Sudetenland region, where ethnic Germans constituted the majority. The British sent a special commission headed by Lord Runciman to investigate and examine the overall situation, and to speak to all the leading actors in this matter. He recommended partition.

Article 19 of the League of Nations' Covenant, which was incorporated in the Versailles Treaty, said:

The Assembly may from time to time advise the reconsideration by Members of the League of Treaties which have become inapplicable, and the consideration of international conditions which might endanger the peace of the world.[6]

It was therefore agreed by the four European Great Powers (three of whom drew up the offending 1919 treaties) that adjustments to the borders would have to be made. The Agreement by the four European Great Powers was to award the full annexation by Germany of the borderland areas in Czechoslovakia named the Sudetenland, where more than three million mainly ethnic Germans lived (equating to the entire population of Ireland), and which had before 1919 been part of Austrian Crown lands. From a German and moreso an Austrian perspective this was simply peaceful revanchism.

Most of Europe celebrated the Munich Agreement, which was presented as a way to prevent a major war on the continent (as per Article 19, above).